Regular readers may have noticed that we were wowed at the recent IFA technology show in Berlin by Epson’s new high-end projectors, complete with brand new ‘reflective LCD’ technology. But the TW450 we’re looking at today is about as far away from those serious home cinema machines as you can get!


This is not, we should hastily add, necessarily an instant condemnation. It’s just important that we get the projector in its right context – which is that it’s designed for the casual user who fancies the odd bit of big-screen fun, most likely with a gaming console attached. 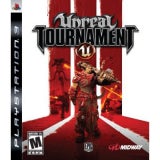 In fact, if you want to get a feel for just how Epson itself perceives this cheap (sub-£700) LCD projector, check out this promotional video.


It was with our trusty PS3 controller clutched firmly in our hands, then, that we set about the TW450 to see if it really is cheap and cheerful or just, well, cheap.


It’s perfectly designed for its target market, at any rate. Its footprint is startlingly small, it’s very light, it ships with a surprisingly decent carry bag, its shaping is just curvy enough to be funky, and it’s finished in a glossy black finish with lots of big white logos splashed all over that’s perfectly suited to the ‘boys toy’ market.


Its pretty canny about its connections, too, covering all the most likely bases a casual user might need. There’s a single HDMI for digital HD sources; a D-Sub PC jack for desktop gamers or people who fancy pumping the occasional work presentation through it (handy if you’re thinking of sneaking one through on expenses!); a USB port for direct playback of digital photos; and both S-Video and composite video feeds if you haven’t entered the HD digital age yet.

Turning to what’s going on inside the TW450, it’s big attraction is its 2500 Lumens of brightness (or Colour Light Output, to use Epson’s preferred terminology). This figure is huge, and has been made a feature of the TW450 because Epson believes – very reasonably – that a fundamentally casual projector like the TW450 will often end up being used in an environment where there’s some or even quite a lot of ambient light.


While the TW450‘s emphasis on brightness might be understandable, though, given its price level the brightness inevitably comes with a string attached, in the form of a rather compromised contrast performance. Epson – rather optimistically, we feel – rates the projector’s contrast ratio at 3,000:1, but in reality there’s really quite a bit of greyness hanging over dark scenes. We’ll return to this in more detail later.


The TW450’s native resolution is an HD-Ready 1280×720 rather than a full HD 1920×1080, but this is as we would expect for the TW450’s money. It’s reckoned to be capable of supporting a picture up to 318in across – just about conceivable given its brightness level – and claims up to 4000 hours of life from its 200W lamp, depending on whether you run it in its Eco or Normal brightness mode.

Epson quotes a running noise of 28dB for the TW450, which while far from the lowest such figure we’ve seen doesn’t seem too bad for such an extremely bright but small projector.


Setting the TW450 up needs to be easy to suit the casual market, and it mostly is. The zoom and focus adjustments on the lens barrel are easy to access and surprisingly sensitive. There’s a simple drop-down leg at the front and two screw down legs at the rear to help you get the picture positioned correctly. The projector carries a built-in 1W speaker so you don’t have to worry about finding an external audio source to accompany your projected images. And there’s +/- 30 keystone correction to get the edges of your image straight if it’s hitting your screen at an angle. 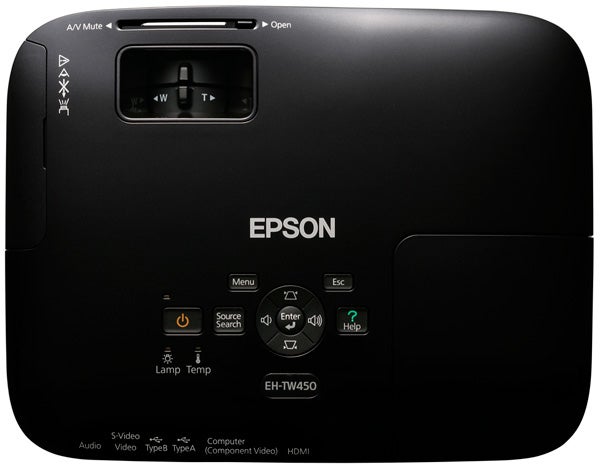 It would obviously have made set up even easier if Epson had included a vertical image shift tool, and provided more optical zoom than 1.2x. And a backlit remote would have been handy too, notwithstanding the ability of the projector’s own extreme light output to illuminate your room! But really it would have been a very pleasant surprise if any of these issues had been addressed by a projector at the TW450’s price level.


One last surprising but welcome bit of news before we check out the TW450’s performance is that it ships with a three-year warranty on both the main unit and the lamp.


The only thing we can really think of to say by way of introduction to the TW450’s pictures is that they are what they are. Which is to say that as per Epson’s marketing, they work surprisingly well for the projector’s money in bright ambient light conditions – but by the same token can’t really satisfy anyone with any serious AV persuasions. 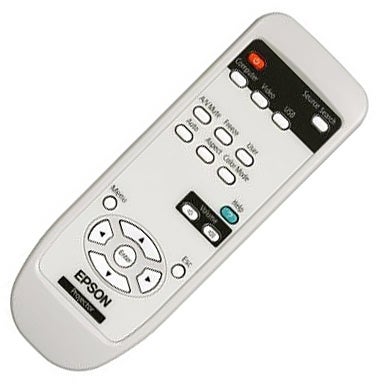 The problem when trying to ‘get serious’ with a film in a darkened room is, as hinted earlier, the projector’s inability to deliver anything approaching a true black colour. The deepest the TW450 can go is a mid to dark grey, which obviously makes the viewing of dark film scenes pretty unsatisfying. Especially as the lack of contrast means shadow detailing is hidden behind the greyness, and colours lack dynamism.


On the upside, the TW450’s picture with HD films is surprisingly sharp and detailed for a projector that doesn’t boast a full HD resolution. The sense of crispness remains intact, too, during camera pans and fast action sequences. Plus, of course, Epson’s preference for LCD over DLP technology means you don’t have to worry about the latter technology’s issues with the rainbow effect or dotting noise in dark areas or over moving objects.


We did detect a curious horizontal line glitch, though, a bit like screen tear in video games, that occasionally flickered up during 1080p/24 Blu-ray viewing, especially, it seemed, when there was a lot of action going on.

Even more bizarrely, we couldn’t get our TW450 review sample to show a picture from the HDMI output of our Xbox 360 Elite. Hence our use of the PS3 controller mentioned earlier


Epson is convinced there are no problems with Xbox consoles and the TW450 normally, so we’ll have to just put our problems down to a technical issue with our review sample.


Anyway, with PS3 games our experience pretty much tallied with our film experience, with startling brightness, good sharpness and impressively little video noise on the good side but a real lack of contrast – or, at least, black level – and washed out colours on the bad side.


Actually, playing around with our room conditions while playing on the PS3 crystallised a pretty simple but fundamental truth about the TW450. Namely that it actually becomes more appealing the more ambient light you add to your room.

This is obviously completely opposite to normal projector logic, but the TW450 is so fundamentally configured to remain watchable in light conditions that it actually doesn’t really know what to do with itself in darkness.


Which leaves us feeling a touch disappointed. For while we totally understand Epson’s point in catering so strongly for casual, even daytime use with a projector like the TW450, we can’t help but think that a company as clever with projectors as Epson could have provided a bit more flexibility in the TW450’s settings to help it adapt to dark viewing conditions more successfully.


Our gaming experience also found the TW450 suffering with a couple of minor issues that are actually wholly understandable for its money. First, curved edges tend to look a bit jagged. And second, the projector does, predictably, run slightly noisily, especially in its Normal light output mode. But this probably won’t bother anyone much in the casual sort of circumstances the TW450 is likely to be used in. Especially if you’re using the onboard speaker, and thus drowning out the cooling fans.


There’s a rather good excuse for the heavy duty cooling mechanism too, in that it allows the projector to immediately fully shut down when you turn it off. There’s no protracted post-powerdown cooling fan activity to have to wait for before you can unplug the TW450.


If you’re more interested in enjoying live sports events and video games in a social environment – hello, Wii lover! – then the TW450’s reasonable price and ability to be used in fairly bright conditions make it worth a look.


However, if you’re a more serious AV user, who likes nothing more than dimming the lights and getting lost in a film or immersed in a game, then the Epson’s one-track mind and resulting lack of contrast and colour intensity will leave you cold.