A big colour laser printer for a small office should have a good turn of speed and plenty of paper capacity, so it can be left to its own devices for weeks on end. Epson’s Aculaser C4200DN aims to do both these things, with a claimed top speed of 35ppm and room to load up to 700 sheets at a time. 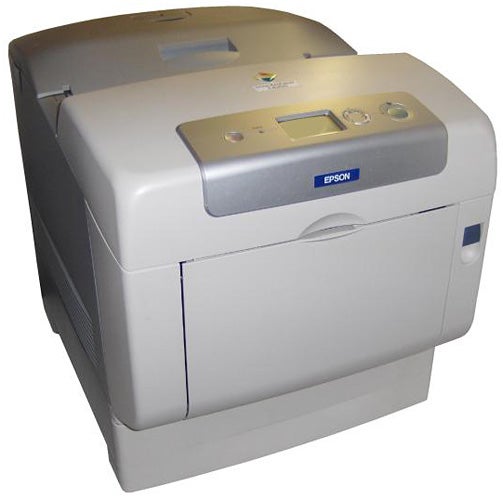 This is a big machine, which sits tall on the desk and may be best sited on a separate stand. It’s not just the height, though, as it’s 588mm deep and it’s a definite two-man lift at nearly 35kg. Part of the depth is down to the four toner cartridges, which sit in a horizontal line beneath a large grey plastic cover at the back, making them more easily accessible than perhaps any others in a desktop colour laser. 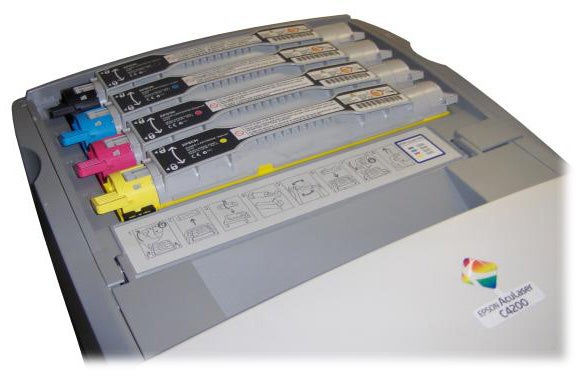 In front of the cartridge section is the paper output slot and at the front of the machine is a simple, but effective, control panel. This features a bitmapped, backlit, multi-line LCD panel; a ring of navigation controls; and start and cancel job buttons.


Below the controls is a 50-sheet, multi-purpose tray, which folds down from the front, and at the bottom is the 550-sheet main paper tray. An optional, second 550-sheet tray is also available, as is a wireless adapter to supplement the USB and 10/100 Ethernet sockets at the back. 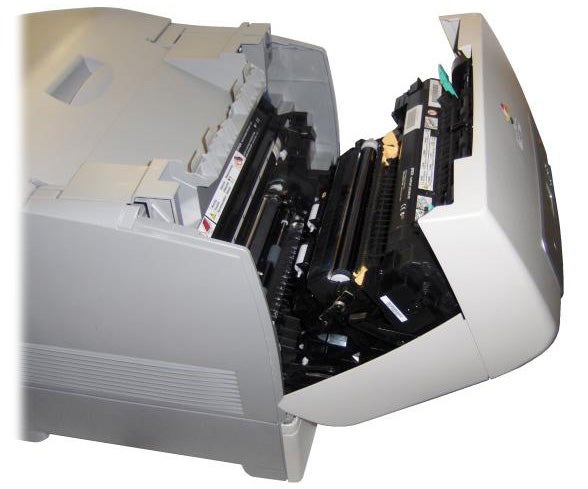 Fold down the whole of the front section and you have easy access to the photoconductor drum, fuser unit and transfer belt, all of which need replacing periodically, but at very high yields. Again, the machine is designed for long service life and minimum maintenance.


Software installation takes little time and involves a full Adobe PostScript L3 driver; slightly strangely, PCL 5 and PCL 6 are options. There’s support for both Windows and OS X on the supplied CD and Linux and NetWare drivers are available to download.

Epson rates the Aculaser C4200DN at 35ppm printing black and 25ppm in colour, but we didn’t see these speeds under test. This was partly due to periods of up to 20 seconds of what the display called Calibration, which interrupted several of the test runs. While it’s commendable that the printer keeps itself calibrated, it would be better if it did this only between print jobs.


The maximum speed we saw out of the printer when producing black text was 26.1ppm and in colour this dropped to 11.1ppm. Duplex print is standard on this machine and a 20-side, 10-page document took 1min 31secs, a speed of 13.2 sides per minute. These speeds are respectable, though when you’re paying over £800 for a printer, you could fairly expect a bit more. 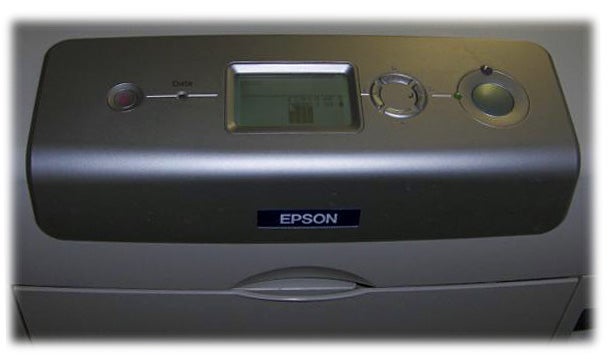 It’s worth comparing this machine with the Xerox Phaser 6360V/N. Although the Xerox version of the printer is over three years old, it’s still a current model, is roughly the same price as the Aculaser and was noticeably quicker when we tested it.


The quality of prints from the Aculaser C4200DN is good overall, but is flawed in places. Black text is dense and easy to read, with a slight sheen giving it a professional look. Colour graphics are bright, but a little variegated, with some patchiness in areas of solid fill. Our photo test suffered less from the gaudiness of many colour lasers than it did, again, from the unevenness of its laying of toner in large areas of solid colour, such as skies. 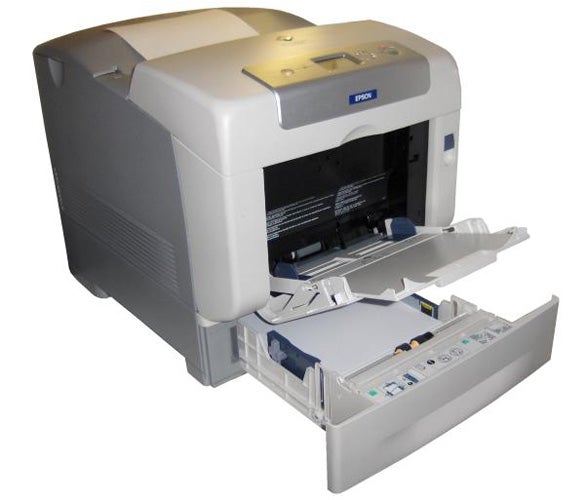 
The units are quite pricey, too, with a colour cartridge costing over £150 and the drum costing over £230. When you work out the cost per page, it comes out at 3.2p for black and 8.7p colour. Again, comparing with the Xerox machine, both page costs are over 1p per page higher, which with the high duty cycle of these machines could make quite a difference to the ongoing running costs.


The Epson Aculaser C4200DN is a robust colour laser printer, designed to take the comparatively heavy workloads of a medium-sized office. With high-yield consumables as standard, it won’t need much attention in day-to-day use. It’s a quick machine, with the added benefit of duplex print, but not quite as fast as the spec sheet suggests, nor as some of its competition. Print quality is adequate, but the running costs are a little higher than you might expect for a printer at this price. A machine for the shortlist, but not at the top.