It’s really hard to get excited about a keyboard, it’s got to be one of the most boring aspects of any PC. In reality though, it’s probably one of the most important components and we seldom give it more than five minutes thought. After all, you’re going to be using it for most of the input in to your machine, and definitely all of your typing.


On and off over the years, I’ve suffered from pretty bad issues with my wrists, including Carpal Tunnel Syndrome, Tendonitis and other issues that fall under the general RSI container. My older brother is suffering from similar issues at the moment – by ignoring the signs, he temporarily has very little use of his hands. Before you laugh off the idea of suffering with any form of RSI, if you use computers for a decent amount of time, you ”’will”’ end up with problems unless you protect yourself.


Enermax is mainly known for its range of power supplies, but it also makes cases, enclosures and among other things, keyboards. The keyboard I’m looking at today is the Aurora. 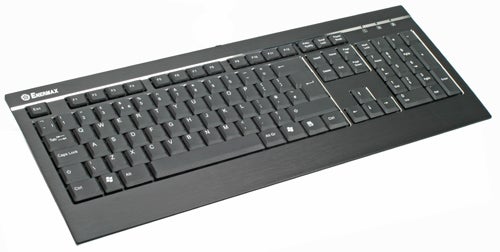 The particular keyboard we were sent is finished in black, but it’s also available in silver. It has a brushed aluminium finish that is quite attractive. It is actually supplied with a cloth for cleaning the surface, as over time it can get a little grubby. More than likely due to the amount of caffeine I intake, my hands do get a little sweatier than I’d like, but it seemed to cope with this quite well with no permanent marks left after a few weeks of use.


Over the past few years, expensive keyboards have moved towards looking more like notebook keyboards than traditional keyboards. This means less action and more compact keys. These can be a bit hit or miss. This keyboard has just enough action that you can feel the keys nicely, even when typing lengthy articles – so definitely a hit.


The keyboard itself is very shallow. In fact it’s almost flush to the desk. It’s quite a strange feeling, but it did mean a wrist rest wasn’t necessary and my wrists were kept nice and straight – no funny angles. My weight was more on my arms leaving my fingers to float above the keys. I have a bad habit of putting my weight on my wrists, which causes a lot of my problems, so the Enermax is definitely a good influence on my typing.


The height can be raised by what must be only 5mm, and it makes very little difference to your typing experience


What I’ve found most useful about this keyboard, in fact almost indispensable, is its port replication.

As you can see, at the end of the cable is a USB plug, headphone jack and microphone. 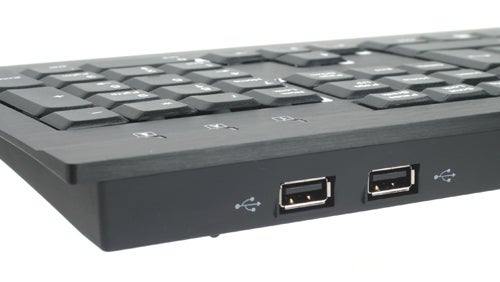 This manifests itself on the keyboard as two extra USB ports (great for flash drives), and audio connectivity on the left hand side of the keyboard. My machine is neatly tucked under my desk, so this has been incredibly useful.


Unfortunately, despite the near £60.00 price tag, Enermax has chosen to use the thinnest cables possible to replicate the audio ports. We actually have two of these keyboards in use here, and on one of them the headphone jack has broken after very little use. A little more attention to quality in this area wouldn’t have gone amiss.


This is a really nice keyboard, let down by a high asking price of £58.69 and the poor quality audio connectors and cables. If you’re using onboard sound and mediocre headphones, this won’t be a huge issue and it is certainly useful for in-game conversations and Skype, but if you value your audio quality, you’ll probably avoid the added connectivity.