The Emporia Life Plus isn’t your usual mobile phone. It is not crammed full of the latest bits and bobs, it is not designed to entice you to go for just one more upgrade, and it is not, well, how can I put this? It is not exactly small. What it is, though, is a phone intended for those who find it difficult to use more usual mobiles because they are a bit complex, or a bit tiny, or just plain too hard to fathom. It is sold in the UK by a company called Matobmobile, a specialist in supplying ‘easy to use, simple mobile pones for the elderly and the disabled’.


Now I want to make an important point here. I am not suggesting that all the other phones I review are absolutely out of the picture for our older readers or those with disabilities. Plenty of people in both groups use a range of mobiles and enjoy fancy phones as much as the next person. But there are groups of people for whom run of the mill phones aren’t appropriate, and Matobmobile reckons the Emporia Life Plus is suitable for them. 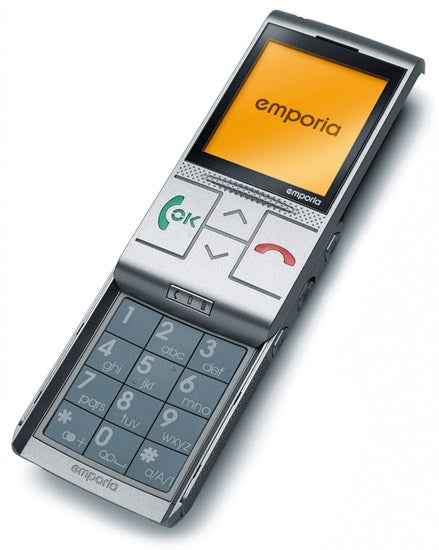 This phone will cost you £169 if you want it SIM free, and it is free on a range of contracts. Essentially the Emporia Life Plus is a phone with a basic feature set and some specialities designed to appeal to those that fall within its target ‘elderly’ and/or ‘disabled’ groups. It is only dual-band, which might be a problem for those who like to travel.


It is a positively vast slider phone and when closed it measures 112mm tall, 58mm wide and 18mm thick – not exactly pocket-sized. Slide it open and it’s a massive 175mm tall. I can see the point of the size as it means the phone can accommodate a big screen and large keys – more on both in a moment. But I found it difficult to open and close the slide one handed, and I reckon my thumb muscles are pretty good from plenty of phone sliding. I’d say that many of those less firm in body than myself could find it a bit of a pig to slide, and at 138g it is a little heavy.

Now about those keys, then. The front fascia houses what are quite probably the largest Call and End keys I have ever seen on a mobile. Actually they aren’t, strictly speaking, discrete keys. They are pads that respond to pressure. The same can be said for a pair of up and down arrows that sit between the Call and End buttons. There are no softmenu buttons, either, so the Call and End buttons double up to provide softmenu functions, which keeps things simple.


Open the slide and a gargantuan number pad greets you. I measured the keys at 14mm wide and 13mm tall. Furthermore, these keys are discrete rather than printed on a flat pad, and the keys are beautifully designed so that they are very easy to press. Their number markings are huge and there’s a very strong backlight. 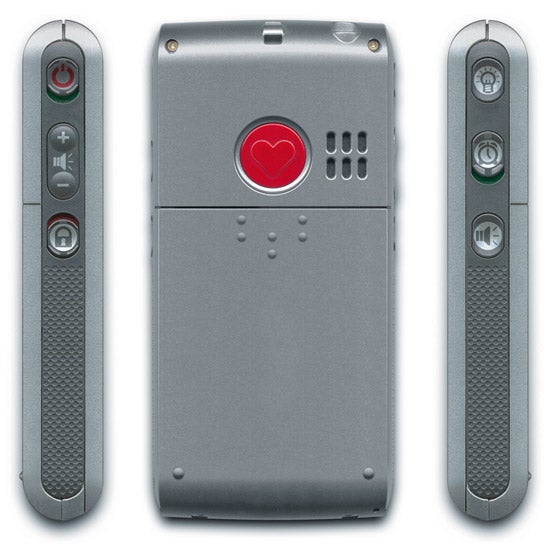 On the back of the phone is a centrally located lanyard connector. I suppose you can use this to hang the phone round your neck, though I’d say it is a bit unwieldy for that particular activity.


The back also has a large, round, red button with a heart in its centre. This is the Emergency button. It dials a call to 112 and issues a piercingly loud siren sound as it does so. That’ll ensure anyone around you knows you are in trouble. I do wonder if it is a little easy to press this button by accident, but I guess it’s a trade-off between making it too easy to press accidentally and too difficult to get to when you need it.


There is an LED light on the top end of the phone which acts as a torch. I’ve said it before when I’ve seen this feature on mobiles and I’ll say it here now. It is so completely useful that it should be a standard feature on any mobile phone. In this case you activate the torch with a button on the right edge of the handset, keeping the button pressed down for as long as you want the torch alight. Below the torch button is another that lets you set an alarm and beneath that is a button for the phone’s loudspeaker.

I am a bit concerned that the side buttons are easily hit accidentally either when holding the phone or by something in your pocket or bag. Just as with the Emergency button, though, this is an ease-of-use versus accidental pressing trade-off, and in this case you can lock the buttons with a left side-mounted slider. This side also houses a volume rocker and the phone’s on/off switch. A huge key pops up on screen whenever you try to touch a locked button, but interestingly enough the Torch and Alarm buttons are never locked. Oops.


The screen measures a large 2.7 inches diagonally and its old fashioned FSTN LCD technology offers black text against a greenish background that turns orange when you press a button. It is old, old, old technology and is a little slow to respond to key presses, but neither factor is a major problem here. 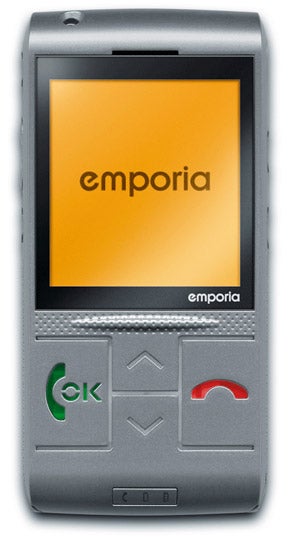 For all its size, the screen only manages 128 x 160 pixels. That isn’t as much of a downer in real life as it might seem on paper. Large fonts are used throughout and the phone manages to display six lines of text which is enough for most SMS messages.


There is no camera and no Web browser to trouble the screen’s resolution or capabilities. This phone is strictly for making voice calls and sending SMS messages. It can do the latter singly or to groups. There are five ringtones plus a birdlike cheeping sound and, bizarrely, a cockerel. They are all naff and users should demand better.


Apparently the handset is compatible with digital hearing aids, though not having one around I couldn’t test this. It is certainly loud, though, with one of the loudest speakers I’ve ever come across. The vibrate feature is pretty robust too.


True, I am not in the target group, but I think the slide might be awkward for some and nobody deserves the dreadful ringtones. I think target users can cope with a few more features and I am sure a stopwatch and unit converter might be useful. I do like the torch and the large fonts though.