Media players are becoming ever more common as the market for them keeps growing. Many tech-savvy video enthusiasts back up their DVD and Blu-ray collections digitally, or buy films in digital format through the Internet. For playing these back, a media player can be a cheap and flexible alternative to a dedicated Home Theater PC (HTPC), especially as the quality and functionality of these devices continues to improve. So today we’re looking at another model, this time from Eminent – the EM7075-DTS hdMedia Stream.


This media player makes a good first impression thanks to a comprehensive bundle of extras in the box. You get a remote with batteries, HDMI cable, composite cable, optical digital audio cable (by no means a common inclusion), and even an Ethernet cable. The power cable for the media player itself is very unusual, in that it includes a handy power switch integrated halfway between the device and power brick. This allows you to tuck the box out of the way while still easily powering it off if you don’t like to leave devices in standby.

The EM7075-DTS is larger than the Western Digital WDTV Live with which it shares very similar capabilities. While by no means as cumbersome as the huge A.C.Ryan ACR-PV73100 Playon!HD due to the lack of an internal hard drive, it’s roughly comparable to Asus’ O!Play HDP-R1 in both size and looks. It sports a glossy piano-black finish that scratches easily and shows dust off to best advantage, though with a little care this shouldn’t be too much of a problem.


Build quality leaves no room for complaint though, as there wasn’t a hint of flex or creak. Also, as it doesn’t contain any moving parts the unit is completely silent in operation. At the player’s front is a blue power LED that changes to red when in standby, and there are separate indicators for USB and LAN activity.

Connectivity is the first area where this player lags a little behind the competition. For example, it only offers a single USB input where the WDTV offers two and the O!Play features a dedicated USB plus combined USB/eSATA connection. It also lacks the component video output of Western Digital’s device, though this is only a concern for those who own older high definition televisions without HDMI or DVI.


However, for the remainder there’s little to complain about. It might lack wireless capabilities, but an Ethernet port is provided for hooking the hdMedia Stream up to a network. A separate digital audio output is provided along with composite video and stereo audio connectors, and the HDMI output is version 1.3. On connectivity alone the ACR-PV73100 Playon!HD still trumps all its competitors, but one unique feature of the Eminent is a 3.5mm jack for hooking up an IR extender. It’s a handy feature though the required extension is not included in the box.

The remote control is again very similar to WD’s model in shape and size, and it is comfortable to hold. It takes two AA batteries so rechargeable ones can be used, but the battery hatch is quite difficult to remove. Unlike the buttons on the remotes of most competitors, the ones here are all the same size. This leaves the layout as the only way to distinguish between them, in turn making the remote more difficult to use in the dark. At least that layout is logical though, and the rubber buttons offer decent feedback. You’ll need to make sure to keep the remote to hand as it’s the only way to control the media player’s functions. 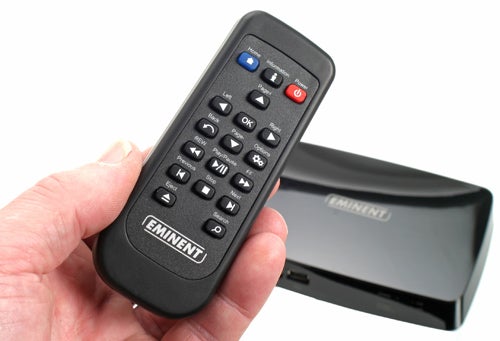 So what’s it actually like in use? It takes a lengthy 25 seconds to boot from off, but from standby it only takes five seconds. The interface is attractive and simple, easily matching any other player we have seen. Though files can be viewed in a list or in icons, the one disadvantage the hdMedia Stream seems to have here compared to its closest competitor is that unlike the WDTV Live it doesn’t appear to offer video previews. On the other hand this means switching between menus and files is nearly always instantaneous, except that when you plug USB storage in, it can take a few seconds to read it. The Eminent hdMedia Stream handles FAT, FAT32, and NTFS file systems.


Sorting systems are extensive. In ‘Music’, for example, you can view your collection by artist, genre, album, date, folders, recently-played or even playlist. You also get all the settings you might wish for, including 1080p 24 playback, colour depth, etc.

It’s not surprising to see that file support is practically identical to the WDTV, since the same Advanced Sigma Designs 8655 processor beats at the heart of both media players. Thankfully that means there is a pretty extensive list. Image support includes GIF, BMP, JPEG, TIF/TIFF and PNG. In terms of audio the Eminent can handle WMA Pro, AAC, AC3/Dolby, MP1-3, WAV, (L)PCM and FLAC, and as the “DTS Edition” part of the player’s title suggests both DTS through and downmixing of Dolby/DTS to stereo. 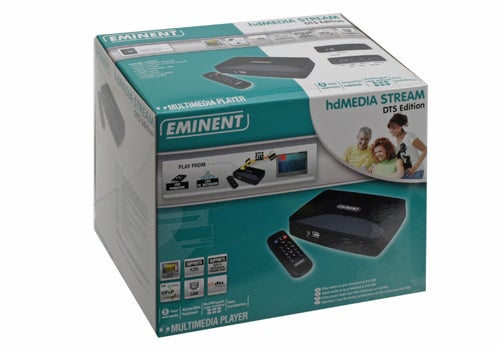 For video we have Xvid HD, MPEG 1-4.2, WMV9, H.264, VC-1, MKV, AVI, VOB, ISO, IFO, DVR-MS, ASF and MOV on hand. The only absentee on this list, which it shares with the WDTV Live, is RMVB, which is supported by both Asus’ O!Play HDP-R1 and A.C.Ryan’sACR-PV73100 Playon!HD. However, while you can’t hook up an external DVD player, like with the Playon! HD, Eminent does allow you to play back Blu-ray ISOs from USB or networked storage. Finally subtitle support includes SRT, SUB, SMI, SSA, ASS, and Vobsub.

Everything worked without a hitch, and the hdMedia Stream smoothly played back all supported files we tested. File formats it doesn’t support simply don’t appear in its file structure, which can be a bit confusing and indeed annoying but is a failure shared by most of these media players. Video can be fast forwarded or rewound at up to 16x while the Sigma 8655 allows for basic upscaling, so even standard definition material looked good. 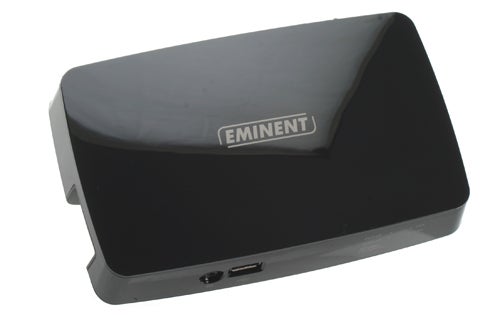 Last but not least we come to the Eminent’s network functionality. Obviously this includes basics like streaming content from a NAS box, but other than that functionality is somewhat mixed. Where the WDTV Live offers YouTube, Flickr and Pandora (for online videos, photos and radio respectively), the hdMedia Stream has no Internet streaming services. However, it does offer DLNA, UPnP and SAMBA, with bittorrent and nzb download support thrown in for good measure. There is the possibility that more functionality will be added through future firmware updates, as there’s no reason these two players cannot match each other feature for feature when it comes to software. For now, you have to choose which feature set appeals the most, though again the Playon!HD offers the best of both worlds.


Overall then, we have a very capable and functional media player but one that is not without its faults and doesn’t stand out from the crowd. It offers a great selection of features and looks good doing it in terms of both the physical unit and its interface. Ultimately, what will make or break the Eminent is price. With the WDTV Live available for just under £100, for most consumers there might seem little reason to pay the extra £20 Amazon demands for the Eminent player – especially as Western Digital’s device offers an extra USB input, component video out and is smaller too.

However, Eminent does provide a class-leading five-year warranty, so for those who value peace of mind it’s pretty attractive. It’s also worth keeping in mind that the Eminent might soon be sold through other UK retailers and once availability increases its price should go down to at least match the WDTV Live. Finally, if you want the fullest feature set for the least money, the Asus O!Play HDP-R1 is still the media player to rule them all, and you can look forward to our review of Asus’ latest model, the O!Play HDP-R1 Air, coming soon.


Despite coming late to the media player game, Eminent has produced a singularly impressive media player in the EM7075-DTS hdMedia Stream. With its current UK pricing, however, it’s not a great value proposition compared to the competition, though a five-year warranty does compensate for this somewhat.