– not to mention that if all you want one for is to browse the net, flick through a few photos or watch a film, most desktop systems are major overkill. So for those on a very tight budget or with low computing ambitions, eMachines (an Acer brand well known for its budget orientation) has the All-In-One (AIO) EZ1600. 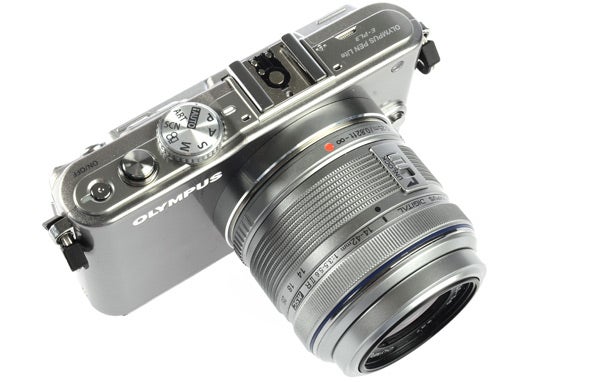 AIOs tend to come in at two ends of the spectrum: expensive designer units that demand significant premiums for their svelte dimensions, like the HP TouchSmart IQ810 and Apple’s iMac, or more recently, highly affordable if slightly underpowered machines usually built around Intel’s humble Atom CPU, such as the touch-enabled Eee Top and non-touch ViewSonic VPC100.


In fact, the EZ1600 and VPC100 have more than a few things in common aside from their lack of touch abilities. They share the same 1.6GHz Atom processor, 1GB of RAM, Intel Integrated graphics, 160GB hard drive and even 18.5in screen, not to mention a matte and glossy black finish with faux-chrome highlights.

Before we get onto the machine itself though, let’s take a quick look at the included peripherals, both of which are unfortunately PS2 rather than USB, though this does offer the advantage of leaving the machine’s USB ports free.


The eMachines-branded keyboard is finished in a mixture of black and white, the latter of which doesn’t really match much about the machine except its white power cable. Layout is very simple, as the only additional keys are volume controls and a sleep button – however, this simplicity is refreshing, providing the essentials without superfluous fluff. In use the keyboard is a bit unstable, which can be fixed by extending its legs if you don’t mind typing at an angle. Key feedback is decent, and overall it’s quite pleasant to use. 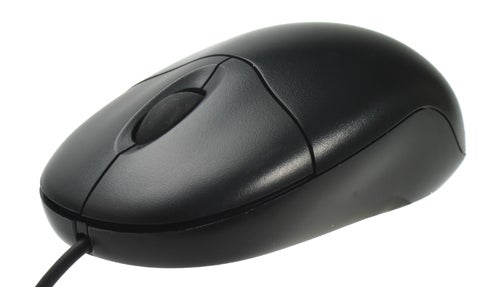 Likewise, the two-button Logitech mouse is quite comfortable, but as basic as it gets. There’s no four-way scrolling though its wheel does offer notched feedback, but worst of all is the sensor-technology it uses – or rather, lack thereof, as this is a ball mouse. Yes, that’s right, this mouse bundled with a PC close to the first decennium of the new millennium uses an actual, physical ball – which you’ll need to clean regularly. At least it will work on glass.

Anyway, enough about a peripheral belonging in a museum, instead let’s look at eMachines’ PC. Setting it up is, as with most AIOs, supremely simple. Just slide the supporting leg out, connect the power brick and you’re ready to go.


While not particularly attractive, there’s little wrong with the EZ1600’s looks. The screen is surrounded by a wide glossy black bezel, with the lower part divided by a chrome strip that contains the power button, stamped with the eMachines ‘e’ and backlit in green. To either side is a matte-finish leg, elevating the EZ1600 about 5.5cm off your desk. 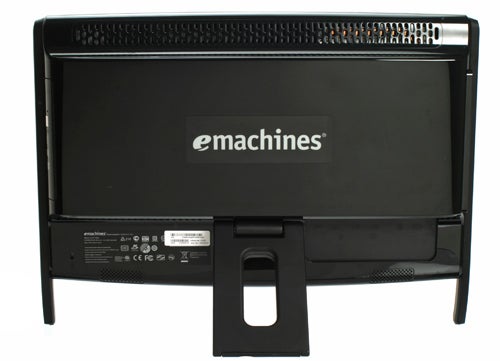 Overall build quality is not outstanding with a fair degree of flex in many of the panels, but unless you particularly make a habit of moving your computer around a lot you should have no problems.


Connectivity is one area where it definitely has some advantages over the ViewSonic VPC100, with one extra USB port and a line-out audio jack. At the back are three USB ports, the line-out, PS2 ports and an Ethernet connection. Meanwhile, headphone and microphone jacks, a further two USBs and a multi-card reader are located at the left side, where they’re in easy reach.

Here we also find physical brightness controls for the screen, which while not quite up to the triple system employed by Shuttle’s XVision X50 which also controlled the power LED brightness and volume, is nonetheless very welcome. On the right is housed the tray-loading DVD-Rewriter, which offers another build-quality concern: it’s very loose and wobbly so you’ll need to be careful when inserting or removing discs. This shouldn’t affect optical media playback, though.


An annoyance the EZ1600 has in common with most AIOs is its lack of video inputs, which is a great pity since with its 18.5in display size it would have been nice to be able to hook up a console or other external device. We really hope this is something manufacturers will start changing soon. 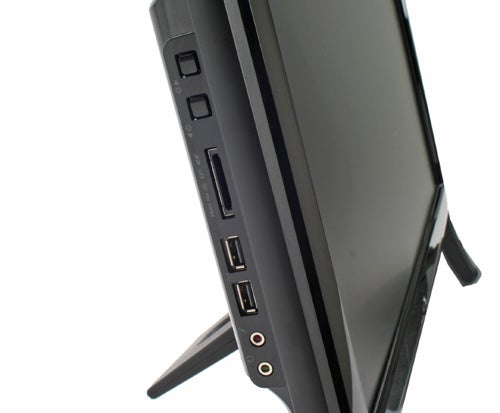 It’s even more of a pity as the 16:9 screen, with its HD Ready 1,366 x 768 resolution, is halfway decent. Despite the usual TN-panel drawbacks of poor viewing angles and below-par greyscale performance, colours are bright, there’s no sign of backlight bleed and only minimal banding. It’s also nice and sharp, while a matte anti-glare coating helps ensure that there are no distracting reflections.


As for the inbuilt back-mounted stereo speakers, we can’t comment because the ones on our unit weren’t working, which is probably due to this review sample having had quite a bit of rough treatment prior to landing in our office.

Getting onto the EZ1600’s internals, we’re essentially dealing with a netbook in a desktop chassis here and it performs accordingly. The Intel N270 processor used is the single-core Atom rather than the dual-core 330 found in Novatech’s ION PC, so while it will run everyday tasks fine, intensive multitasking or video encoding aren’t options here – especially with only 1GB of RAM, which is the minimum required to keep Windows XP happy. 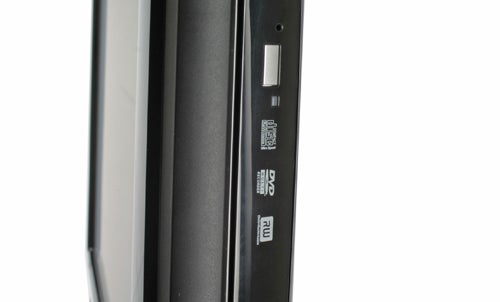 Thanks to the integrated Intel GMA 950 graphics you won’t be able to play Full HD video either, though efficiently-encoded 720p will just about run. And you might as well forget about 3D gaming altogether, since in the TrackMania Nations Forever test on medium detail the EZ1600 (a very easy test by most standards) it only managed a pathetic five frames per second at the screen’s native resolution.


In line with the rest of the netbook-like specifications hard drive capacity is only 160GB, which to be fair should be plenty for a reasonable family photo and music collection (it’s only if you start cramming entire video collections and games on that you might need more). Last if not least Wi-Fi is built-in, though it’s the slower ‘g’ standard rather than N. 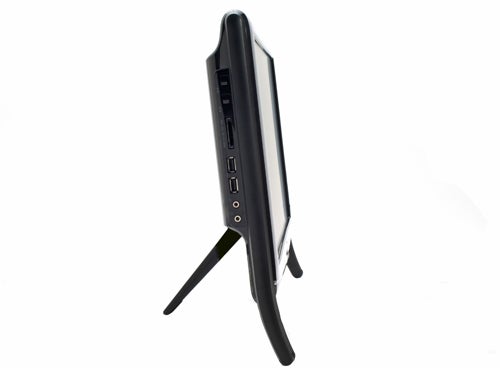 So it’s no great performer, but if all you want it for is to listen to music, watch DVDs, play 2D games and browse the internet, eMachines’ … machine will do the job just fine, while staying very quiet and consuming less than 33W even under load. Best of all, at £338 it’s the cheapest AIO we’ve reviewed.


Whether this makes it worth buying is another matter, since Acer’s great little Aspire Revo R3600 offers far more power (including the ability to play older 3D games and Full HD films), double the memory, more connectivity, Windows Vista rather than XP and Draft-N Wi-Fi for only £227, leaving you a generous £112 to spend on a screen (on which you can mount the Revo) and external optical drive. If you do insist on an All-In-One though, the eMachines EZ1600 is well worth considering. 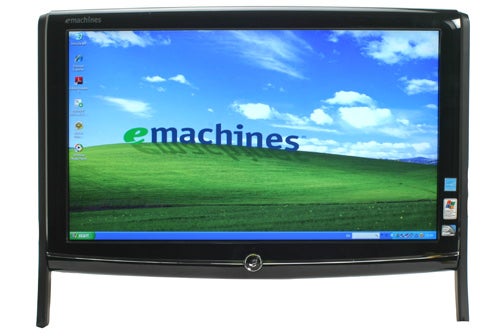 
Average build quality and looks are forgivable considering eMachines’ EZ1600 is one of the cheapest non-touch All-In-One PCs around, and it handles everyday computing tasks well enough. However, if you don’t ”need” an All-In-One then there are cheaper, more powerful yet still small desktop alternatives.