Numerous positives where sound and convenience are concerned, but the Chroma 200 RIAA BT is too compromised to be considered a no-brainer

Elipson has replaced both its Alpha and Omega ranges with an all-new series of turntables called Chroma. As with the models it replaces, Chroma is designed, engineered and manufactured in France – and, with the understandable exception of its cartridges, Chroma is a bespoke design that’s uniquely Elipson in every respect.

But naturally, even though the Elipson’s specification is unusual, this turntable isn’t without rivals. Audio-Technica is standing by to sell you something fairly similar, for example. So is Pro-Ject. So, Gallic charm aside, does the Elipson have what it takes to compete?

The Chroma 200 range is available in a variety of specifications, from the £279 standard ‘just a record player’ version to the RIAA BT alternative we’re testing here. The sum of £429 put Elipson’s way in exchange for a Chroma 200 RIAA BT buys a turntable with plenty more features than the majority of record players can boast, no matter their price.

In terms of design, it’s safe to say the Elipson is a functional looker – although, let’s be fair, that’s the case with the overwhelming majority of record players. A circle (the platter), on a rectangle (the plinth), with a tone-arm off to the right-hand side as you look at it. Anything else is sheer willfulness.

The plinth itself is far from the most luxurious – certainly a price-comparable Pro-Ject or Rega deck will look and feel more like its money’s-worth. It’s an impression that isn’t helped by the badging next to the speed selector; it reads ‘elipson chroma 200-RIAA BT’ and it looks like it was applied at the last moment by someone with a Dymo machine. 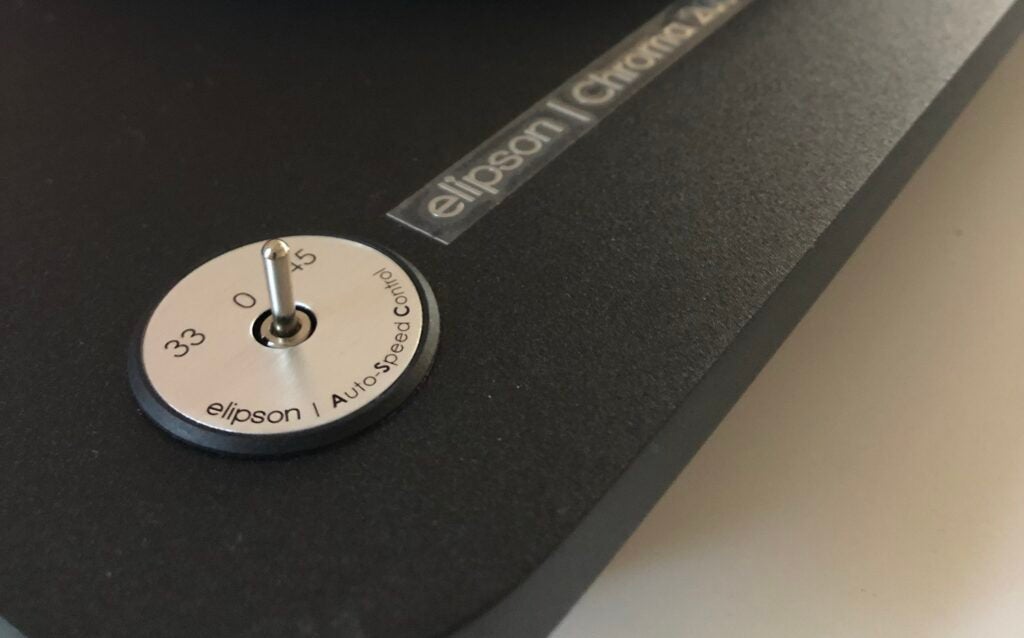 There’s no arguing with the robustness or functional efficacy of the Elipson – it benefits from evolved decoupling and a quieter motor when compared to the models it replaces – but it isn’t all that tactile a device.

The dust-cover is quite nice, however. It’s shaped to fit the plinth perfectly, and its curved edges make it look quite a bit more upmarket than the turntable it’s protecting.

Elipson has designed its major components from the ground up – but, of course, fundamentally the Chroma 200 RIAA BT is a turntable, just like every other turntable that’s been built in the past seven decades. It has electronic speed control, switchable between 33.3rpm and 45rpm (using a toggle switch so small and slender that I was briefly concerned part of it was missing) – the Chroma 200 RIAA BT waits just long enough after you throw the switch from ‘0’ to ‘33’ or ‘45’ for it to seem like something’s gone wrong.

The aluminium tone-arm doesn’t feel especially upmarket, either. But it is, at least, a continuation of Elipson’s rigorously engineered ‘orbital torsion’ uni-pivot design with integrated anti-skate control. It also has a manual tone-arm lift, which the original Omega models managed without. Here, it’s been implemented to dump the cartridge onto the vinyl with something approaching abandon. 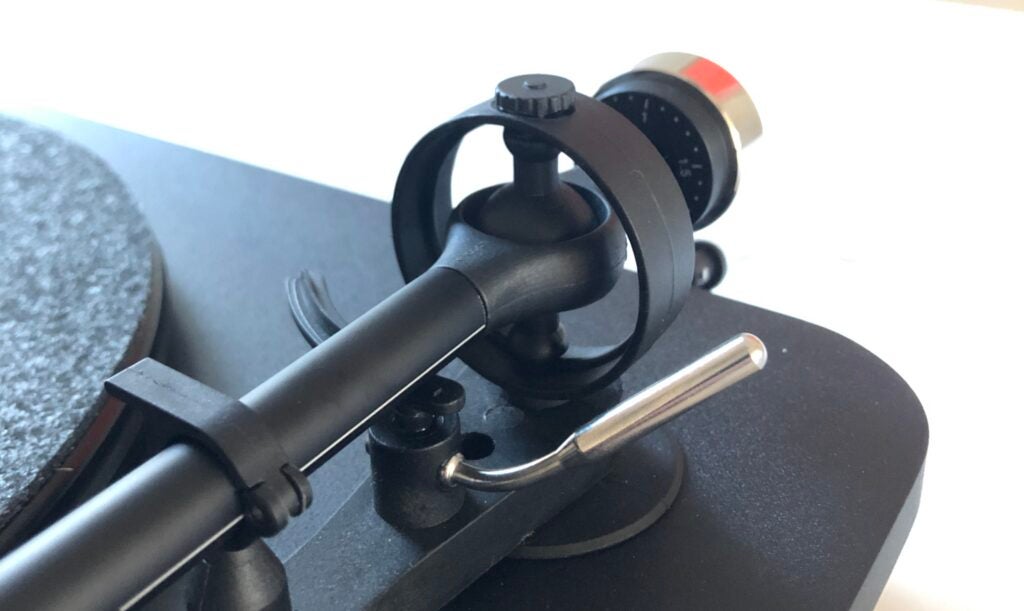 The tone-arm is pre-fitted with Ortofon’s very acceptable OM10 moving-magnet cartridge. So once you’ve adjusted the counterweight (Elipson thoughtfully provides a rudimentary little scale) and slipped the belt around the motor and platter, you’re good to go.

Or at least you would be if this were most turntables – but, as already strongly hinted at, it’s not. The Chroma 200 RIAA BT is fitted with a phono stage that is, unusually, switchable between moving magnet and moving coil. It can’t be defeated altogether; but, of course, there’s a Chroma 200 without an integrated phono stage if you already have an acceptable method of amplifying a deck’s feeble output to a useful level. Attach your Elipson to a line-level input on your amplifier using a pair of RCA interconnects and the Chroma 200 RIAA BT is ready to play with no further amplification required. 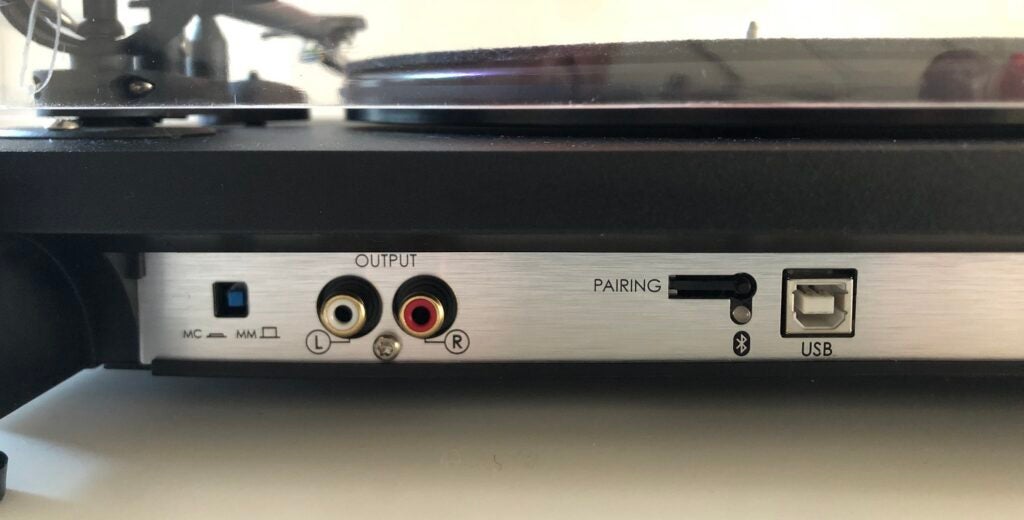 However, if even that seems a bit retrograde, there’s also a ‘pairing’ button on the back panel of the Elipson. Follow the rather Byzantine instructions and eventually it’s possible to wirelessly pair this turntable with appropriate headphones, or amplification, or speaker(s). Which means you can wirelessly stream your vinyl, at a very acceptable Bluetooth aptX HD standard , bringing your vinyl experience bang up-to-date and offering a degree of convenience seldom associated with record players.

And if you have some especially rare or precious vinyl you don’t want to degrade by playing all the time, the Chroma 200 RIAA BT has an integrated analogue-to-digital convertor behind its USB output. Download some appropriate software to your computer – I like Audacity myself, but there are plenty of alternatives – and you can make digital copies of your records.

Elipson Chroma 200 RIAA BT sound quality – To wire or not to wire?

So, as has been established, there are a couple of ways to listen to the Elipson Chroma 200 RIAA BT. During the course of this test, it’s hard-wired to the line-level input of a stereo amplifier, and it streams wirelessly at aptX HD standard to the same amplifier. And then, for good measure, it’s hooked to an Apple MacBook Air via its USB output so a few digital recordings can be made.

Reassuringly, there isn’t an enormous amount of difference between the sound of the Elipson when it’s hard-wired and when it’s streaming wirelessly. So, it’s probably safe to say that you can go ahead and deploy Bluetooth without any nagging doubts regarding performance. At least, you can if your Bluetooth device can work with an aptX HD signal.

Listening to a copy of Funkadelic’s Standing On The Verge Of Getting It On, with the deck hard-wired to the amp, lets the Chroma 200 RIAA BT demonstrate no little skill where rhythmic expression and tempo management is concerned. This recording is primarily preoccupied with engaging listeners from the waist down – and the Elipson keeps the music ebbing and flowing in a convincingly natural (and necessarily libidinous) way.

This deftness doesn’t translate into punch in any meaningful way, however. The low frequencies the Chroma 200 RIAA BT describes are decently detailed and carry proper momentum; but they don’t have a lot of weight and, as a result, the overall sound can be a little polite when it should more properly attack. If your vinyl collection includes plenty of dance music or hip-hop, say, I fear the Elipson may prove too tentative where bass is concerned. 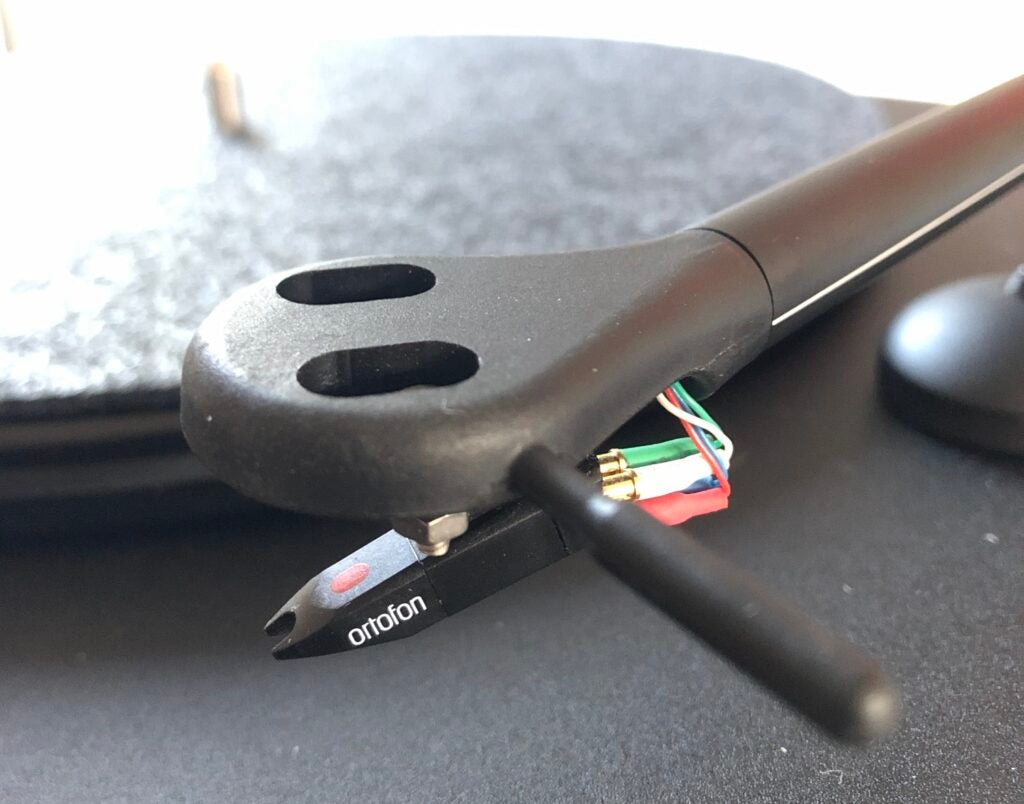 Further up the frequency range, the swiftness and manoeuvrability of the Elipson sound isn’t as undermined by this relative lack of substance. Consequently, the Chroma 200 RIAA BT is a more uncomplicated and enjoyable listen – the character-packed mid-range and overloaded top-end of Eartheater’s Phoenix: Flames Are Dew Upon My Skin is energetic and communicative. There’s worthwhile insight into vocal technique, and a proper suggestion of width and depth to the soundstage.

With a wireless aptX HD connection made, the story is surprisingly similar; the sound of the Elipson isn’t undermined too badly at all by cutting the cord. The most overt difference is a drop-off in the immediacy of the Chroma 200 RIAA BT’s presentation. There’s more of an impression of distance when listening this way, a sensation that everyone on the soundstage had taken a step or two backwards. But, broadly speaking, the Elipson holds up well – and there’s a lot to be said for using a record player that’s positioned where you’d like it to be rather than where it insists on being.

I don’t own much particularly rare vinyl, but I do own some stuff that’s never made it onto streaming services. So being able to make digital copies to a computer and then load the tunes on to a portable device is obviously useful – as long as the results are listenable, of course. And the Elipson makes a perfectly serviceable copy of The Brave And The Bold by Tortoise & Bonnie ‘Prince’ Billy. It’s slightly two-dimensional, admittedly, and hardly the last word in fine detail retrieval, but it turns hard-to-access vinyl into a portable proposition and that isn’t to be sniffed at.

You should buy the Elipson Chroma RIAA BT if…

You should not buy the Elipson Chroma RIAA BT if…