So you want a large LCD monitor. Well, so do I and I think I may have found just the one in the shape of Eizo’s FlexScan S2410W. It’s a 24in widescreen monster, and as you might know, that is my preferred spec for an LCD – ideal for image editing and word processing and/or gaming and watching movies. 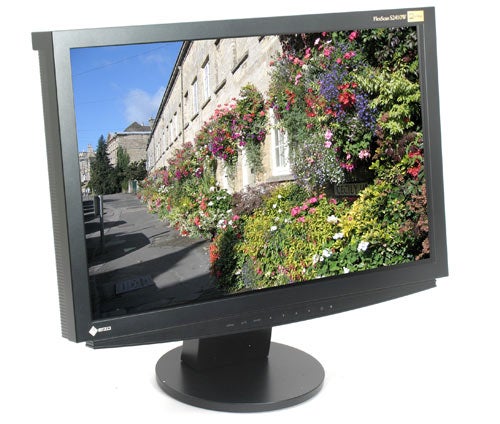 We recently reviewed the Samsung SyncMaster 244T, and Riyad was highly impressed with its overall performance, great price, and solid feature set. We’ve also reviewed the colour-critical Eizo ColorEdge CG220 and the NEC SpectraView Reference 21, both great for image editing, but also expensive.


The S2410W however, sits somewhere between the Samsung and those two professional monitors. At £1,068 at the time of writing, its price is closer to that of the Samsung, but it’s geared towards graphics professionals. Interestingly, the S2410W also uses a Samsung PVA panel which bodes well for contrast and viewing angles, but that does not mean the image quality is necessarily going to be the same. 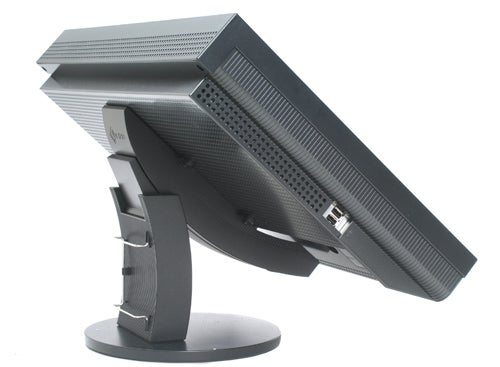 As it stands, the S2410W is a chunky old beast, and dare I say typical of previous Eizo angular designs. It comes in two colours, black and white/silver (the white/silver is perhaps more suitable to a Mac setup), and one of its key features is the stand. This incorporates an ingenious arcing and tilting mechanism that allows the display to be raised and lowered through a shallow curve, as well as being tilted back and forward. This means the panel can be raised to almost eye level or lowered at an angle akin to reading a book. The base also has a 172 degree swivelling action, but unlike the Samsung 244T, the panel can not be pivoted into a portrait orientation.


The chassis is perforated with slits and holes for heat dissipation, and around the back you’ll find a metal cable tidy that in all honesty does a poor job of clamping down on the cables, often flipping open if the cables press against it. 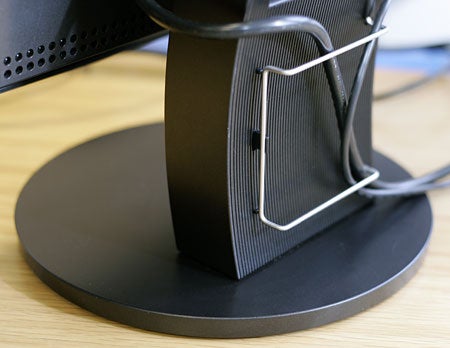 The power supply is internal and for connectivity you get a USB 2.0 hub with two downstream ports positioned on the left side of the chassis. The upstream port is vertically mounted at the rear and the necessary USB cable is supplied. Next to this are two DVI-I ports both of which can accept a digital or an analogue signal but, unlike the Samsung SyncMaster 244T, they are not HDCP compliant. With the supplied DVI-to-DVI and DVI-to-D-SUB cables two PCs can be connected simultaneously. With a touch of the Signal switch you can also swap between the two sources.

Speaking of switches, where are they? Well, Eizo has gone for the touch-sensitive approach, and mounted eight of them along the bottom, all within a subtly curved extension of the lower bezel. Personally, I’m not a fan of these controls as it’s far too easy to trigger them when repositioning the display – that is of course if you’ve forgotten to lock out most of the functions. This can be done by turning on the S2410W, while touching the Auto switch. By default an annoying beep accompanies switch operation, but thankfully it can be muted. 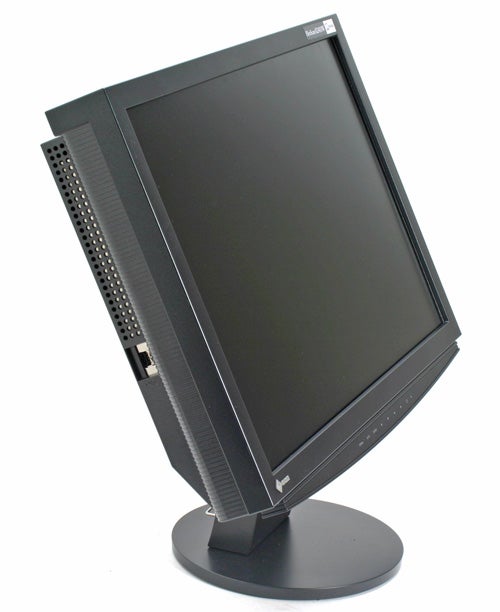 Menu navigation is relatively simple – a case of using the Enter, Up, Down, Left and Right buttons for entering and selecting menus/settings, then making and saving adjustments. The controls on offer reflect the S2410W’s professional heritage and within the OSD – or ScreenManager as Eizo likes to call it – you’ll find a high-degree of colour settings best summed up in the table below.

Key settings include saturation, colour temperature (from 4000K to 10,000K in 500K increments), six colour (RGBCYM) adjustment, and Gamma values (from 1.4 to 3.0 in 0.2 increments). This makes the S2410W highly customisable, but for those who like it simple, Eizo also includes its mini FineContrast OSD for quick access to five modes, four of which are set for Text, Picture, Movie and sRGB (and can be further tweaked if need be). Toggling between the modes is done by pressing the left or right switch. 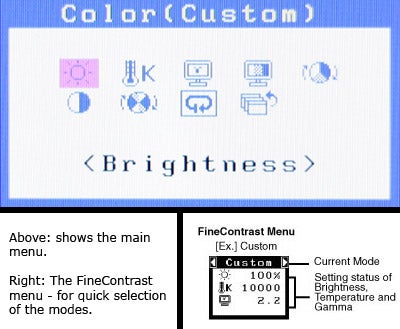 Furthermore, with the bundled ScreenManager Pro for LCD software it is possible to assign any application to a particular FineContrast mode. When that application is selected, the screen changes to the assigned mode. In essence this means you can have a particular mode for Photoshop, and perhaps a dimmer mode for browsing the Internet. This utility also includes a mode for watching video playback in an independently assigned overlay window as well as letting you control the settings with the mouse or keyboard. However for the latter the USB cable must be hooked up. 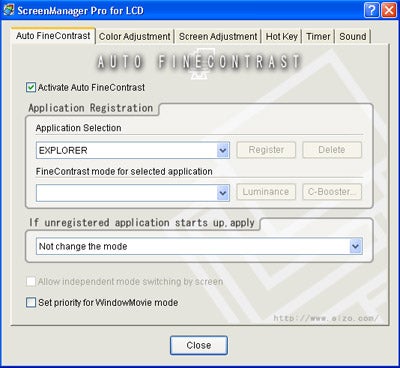 Precise control is all well and good, but if the overall picture quality is not up to it then it’s redundant. Thankfully Eizo hasn’t neglected this. After leaving the monitor to warm up for 20 minutes or so and letting the brightness stabilisation sensor do its stuff, I was treated to some truly outstanding DisplayMate results. 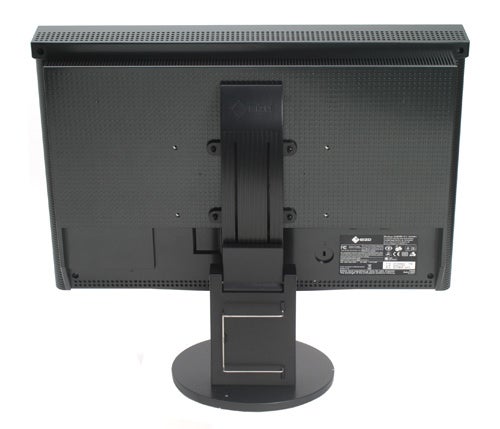 The 14-bit colour processing ASIC gave excellent 256 greyscales and colour scales – smooth as they come, with no signs of banding. I was also just able to discern a difference between level 254 over level 255. Blacks were extremely black, and whites were dazzling – a clear indication that the 1000:1 contrast ratio is no marketing hype. In fact this, coupled with its LCDTV-like 450cd/m2 brightness, makes the S2410W too harsh for normal text work. In this respect, I’d positively recommend using the Text mode to save your eyes. Colours were very vibrant, if somewhat on the over-saturated side, but I was able to soften these with a little tweaking. 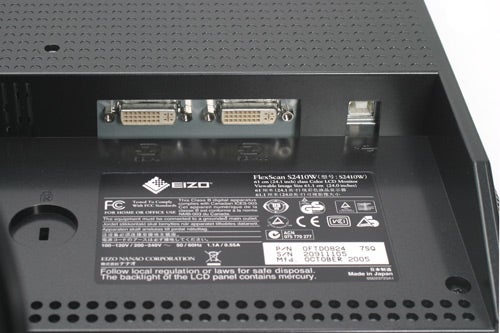 As for my real world tests, colour in my sample shots looked spot on, but some detail was lost in shadows/lowlights. The same could be said of watching movies too, but I can’t fault the lively colours in daylight scenes. With the S2410W’s overdrive circuit in overdrive (excuse the pun), an 8ms mid-tone, (grey-to-grey) response time is realised, making motion smearing and after glow virtually undetectable. Viewing angles in both planes were also very wide, with no sign of colour shifting or a dramatic drop in illumination.


So with a decent set of test results, the Eizo S2410W is probably best described as offering the end user a display solution that encompasses a mixed bag of niches – some factors against it, but more in its favour. It performs well for image editing and is not as expensive as the colour-critical models out there. However, there’s no hardware colour calibration as such. It offers a level of OSD adjustability and customisation that you won’t always find on cheaper LCD monitors, but then it can’t be pivoted into a portrait view. DVD movies look good on the monitor, but then it’s not future-proofed with HDCP-compliancy. 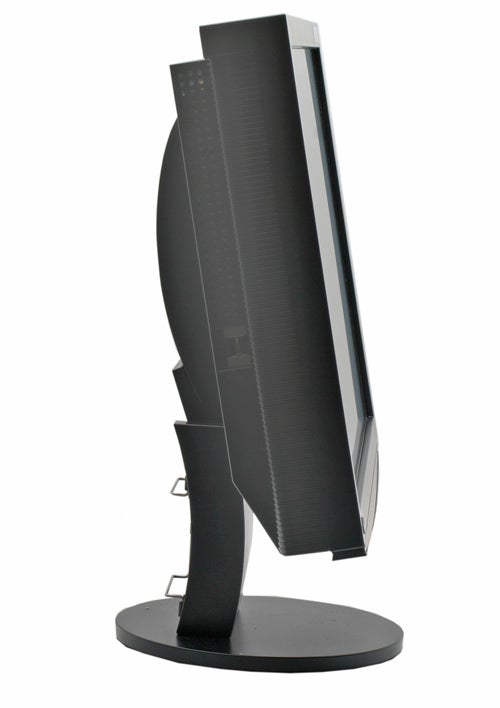 At the end of the day you can’t dispute the quality of the Eizo FlexScan S2410W. However, you could its price when compared to the Samsung SyncMaster 244T.


A fine 24in widescreen LCD geared towards graphics professionals, with a novel stand and a high level of picture adjustment. However, it is pricey and some users may seek a cheaper alternative.