Though it seems to be taking an interminable amount of time for the Wi-Fi Alliance to finally certify the new 802.11n wireless standard, there is no shortage of products already carrying support under the Draft N moniker – with no end of routers, notebooks and other paraphernalia all using it. If, however, you own a desktop PC or even a notebook that doesn’t already have it then a Draft N USB Adapter, such as the Edimax one I’m looking at today, may prove to be just the tonic.


For those not familiar with the terminology, “Draft N” refers to 802.11n – the latest Wi-Fi standard that is meant to succeed 802.11a/b/g. It introduces a new modulation technique called MIMO (multiple-input multiple-output), which uses multiple antennas and a number of new technologies to improve wireless data rates dramatically. Indeed, the jump in both potential throughput and wireless range is a massive step up from previous standards. But, why is this important? 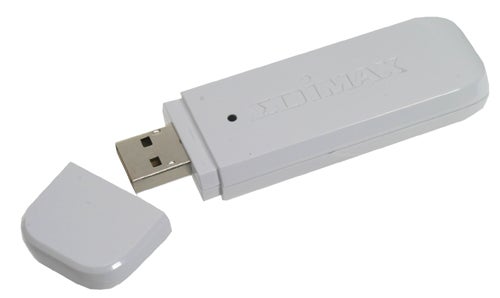 Well, although wireless networking is a great and very popular technology it does have its limitations. Before Draft N the theoretical maximum transfer rate was 54 Mbit/s, but in reality you were likely to achieve just over 20Mbit/s in perfect conditions. This is fine for Internet surfing and for streaming standard definition music and video, but with high definition media becoming all the more popular these data rates simply aren’t enough to stream such content comfortably.


This is where Draft N comes in, since it boasts a maximum theoretical transfer rate of 300Mbit/s and typical throughput of 74Mbit/s. This is enough to comfortably stream high definition content wirelessly, while Draft N also boasts a larger range at 75 metres indoors and a maximum outdoor range of 250 metres. This more or less eliminates any potential signal problems within an ordinary sized house, even those with thick walls. 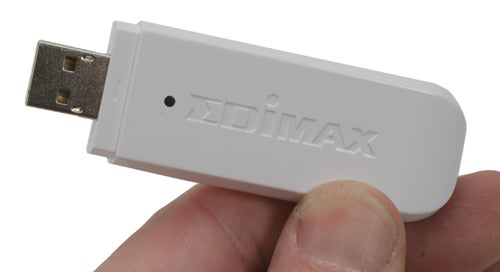 As a device the Edimax is fairly typical. It’s large, but not as large as some wireless adapters. Its all white casing is anonymous enough and though it doesn’t feel like the sturdiest casing, chances are it’ll be plugged into the back a PC and forgotten about. Another small annoyance is the cap doesn’t fit onto the end of the device, which means you’re bound to lose it given enough time.


Again, though, this is a fairly minor complaint and otherwise there’s little to complain about. In the box you get the device itself as well as an extension cable, allowing you to have the device sitting on your desk for easier access. Software and drivers are also provided in the box, so there’s no need to have an already active connection to download them. This may sound like a simple thing, but you can imagine how annoying it could be to not have that software at hand when you don’t have an Internet connection readily available.

Although the selling point here is the aforementioned Draft N support, you can of course use any of the older standard wireless connections should you need. This also extends to security, with the adapter supporting older and frankly insecure WEP encryption as well as newer and the more secure WPA and WPA2 standards that use secure AES encryption. Ultimately this is as thorough a feature set as you’re likely find, while the price at just over £25 is by no means extortionate either.


Installation is as simple as you would expect from a USB device. You simply plug in the device and the device driver will install itself – it’s a genuine plug & play experience. Should you require a few more advanced features you can install Edimax’s own predominantly competent if slightly complicated wireless management software, however the great majority will find Windows’ wireless management more than adequate.


Performance is decent too. An important requirement of any wireless adapter is that it is reliable, and in this the Edimax nMax cannot be faulted. Having used it extensively in all sorts of environments it has never let me down, never dropping a connection unexpectedly or freezing up. Unlike some adapters it doesn’t run too warm either, so it’s unlikely to overheat and die during prolonged use.

This reliability proved particularly useful during frequent marathon sessions of Team Fortress 2, with connection speeds remaining unwaveringly consistent throughout. Much the same can be said of streaming video and music, which was smooth and hassle free.


Wireless range was excellent too, both in Draft N and other wireless modes. It managed to pick up decent signals from several wireless networks around the house, while signals weren’t lost the moment you moved location.


Overall then, this Edimax Draft N Wireless Adapter performs admirably and can be relied upon for all sorts of tasks. It would make a great addition to a Home Theatre PC for streaming video wirelessly, with the Draft N also allowing for greater signal strength and range. It’s keenly priced too, making it something akin to an impulse buy if you were already considering moving to Draft N. Moreover, though it’s unlikely too many changes to the standard will be made before certification, this adapter is cheap enough that were that to happen it wouldn’t hurt too badly.


If you want Draft N Wi-Fi on your media PC or notebook then this is a great option. It’s reasonably priced and well featured and performs reliably and consistently, which is all one can really ask.