The Ecovacs Deebot N79S lacks some of the smarter navigation features of more expensive models, but it gets the basics right.

What is the Ecovacs Deebot N79S?

Although it lacks the smarter navigation of more expensive models, the Deebot N79S proved itself to have decent dirt pick-up. A great app, and Amazon Alexa and Google Assistant support make this an excellent budget cleaner. 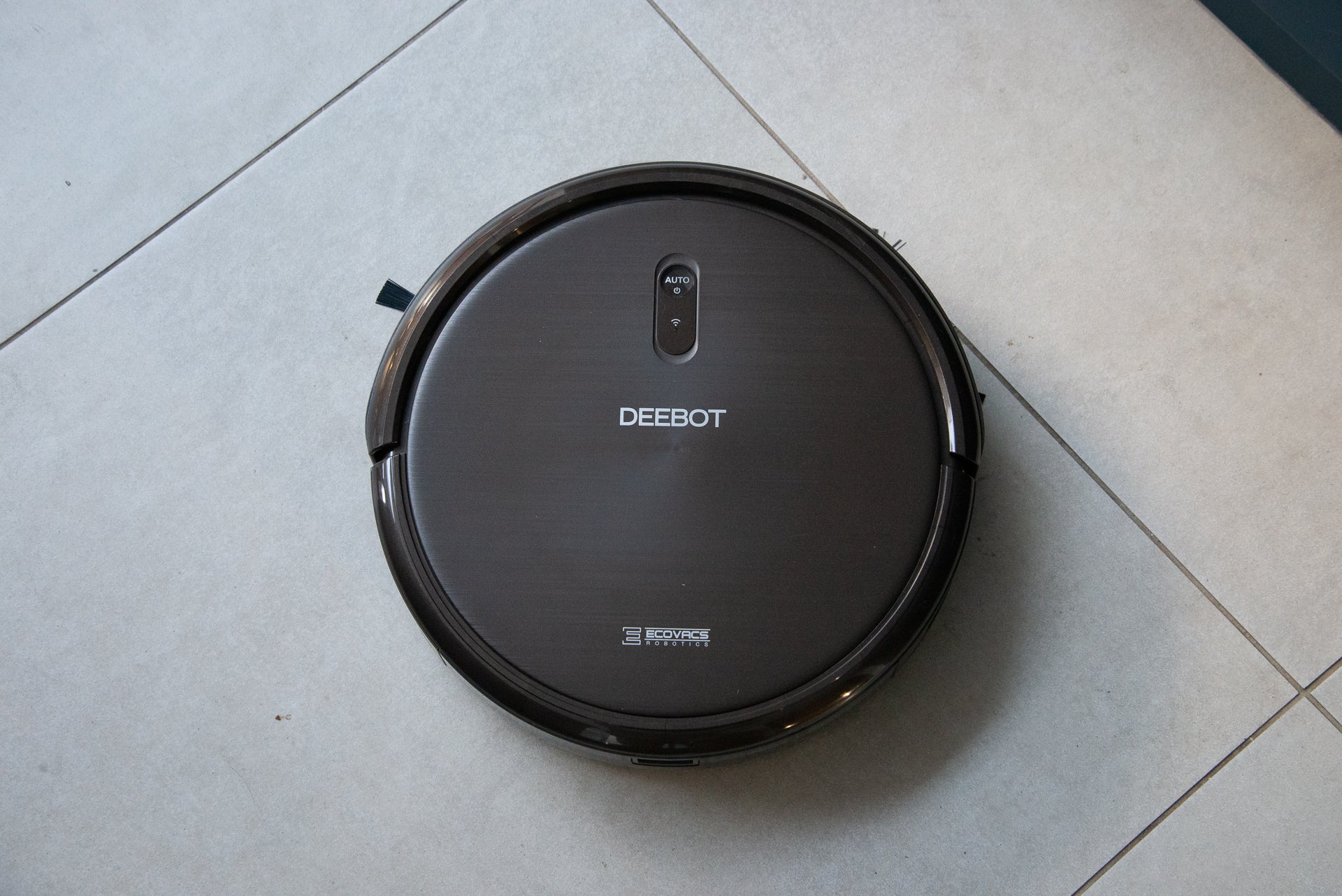 This model doesn’t have a carrying handle, which makes it a little cumbersome to carry around for spot cleaning. There’s a single button on top for starting an automatic clean, and a remote control in the box for added features.

Flip over the robot and you’ll see the dual side brushes for sweeping dust into the main suction path on its underside. There’s a combination bristle and brush bar for agitating dirt on multiple surfaces, too. If this becomes clogged with hair, Ecovacs provides a handy tool for cutting it away. 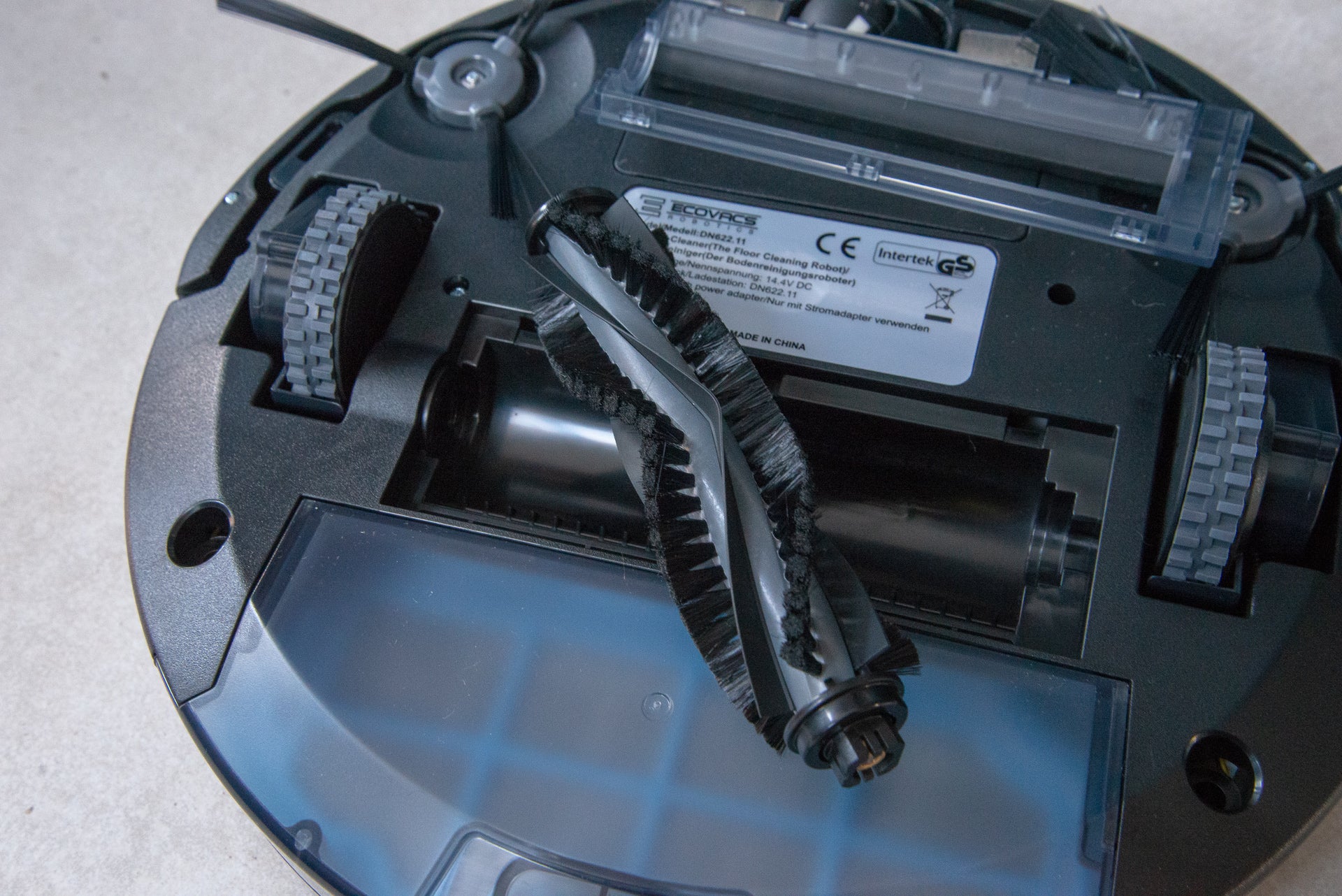 Side brushes should be replaced every three to six months; the main brush every six to 12 months; plus the filter every four to six months. Amazon stocks various third-party options, coming in at around £25 for a year’s worth of replacement kit. 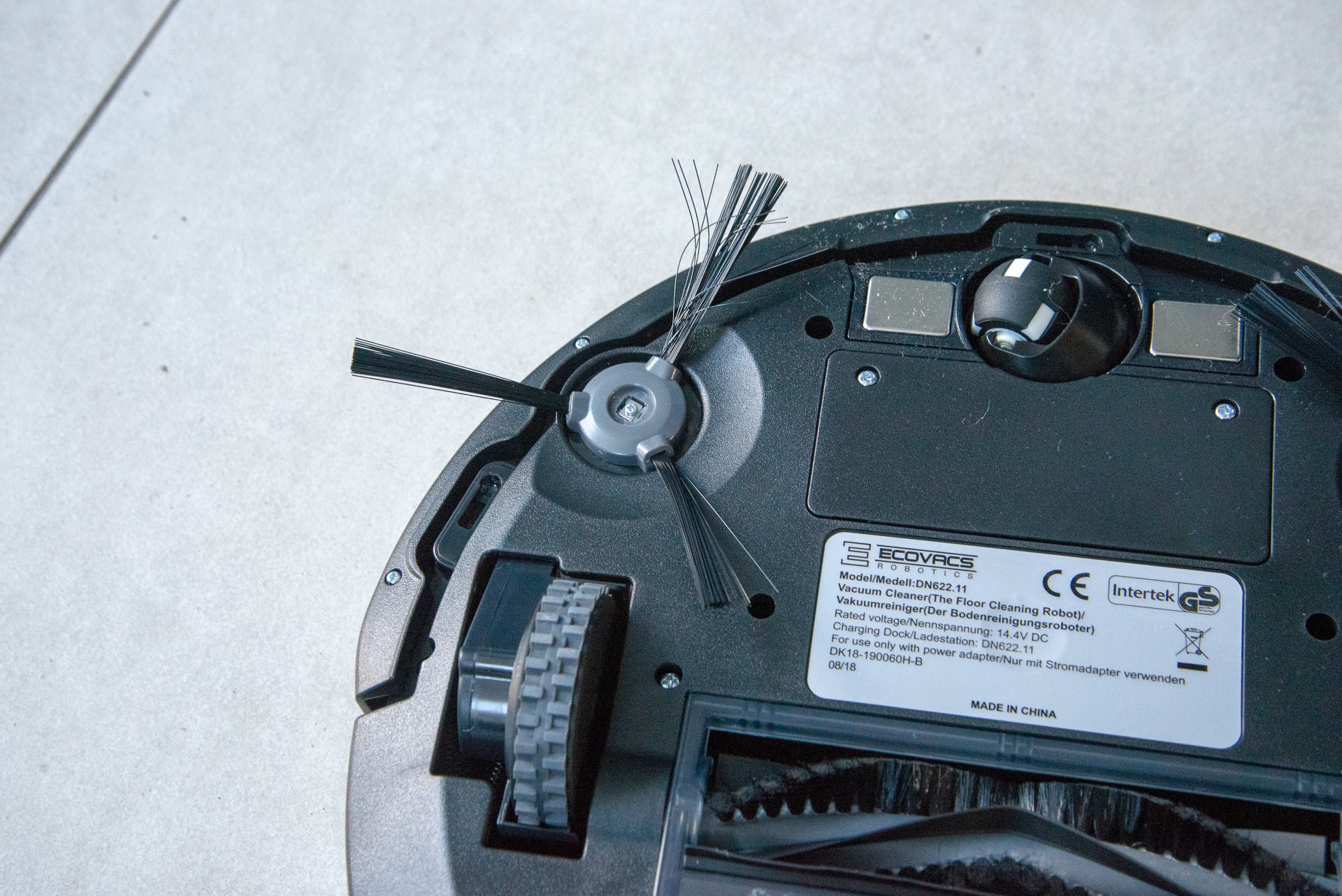 The dustbin pulls out of the back and hinges open so that you can empty it into your main bin. It’s fairly painless to do, and you can run the bin under the tap to clean it out from time-to-time. There’s no bin sensor, so the robot will run without this in place. 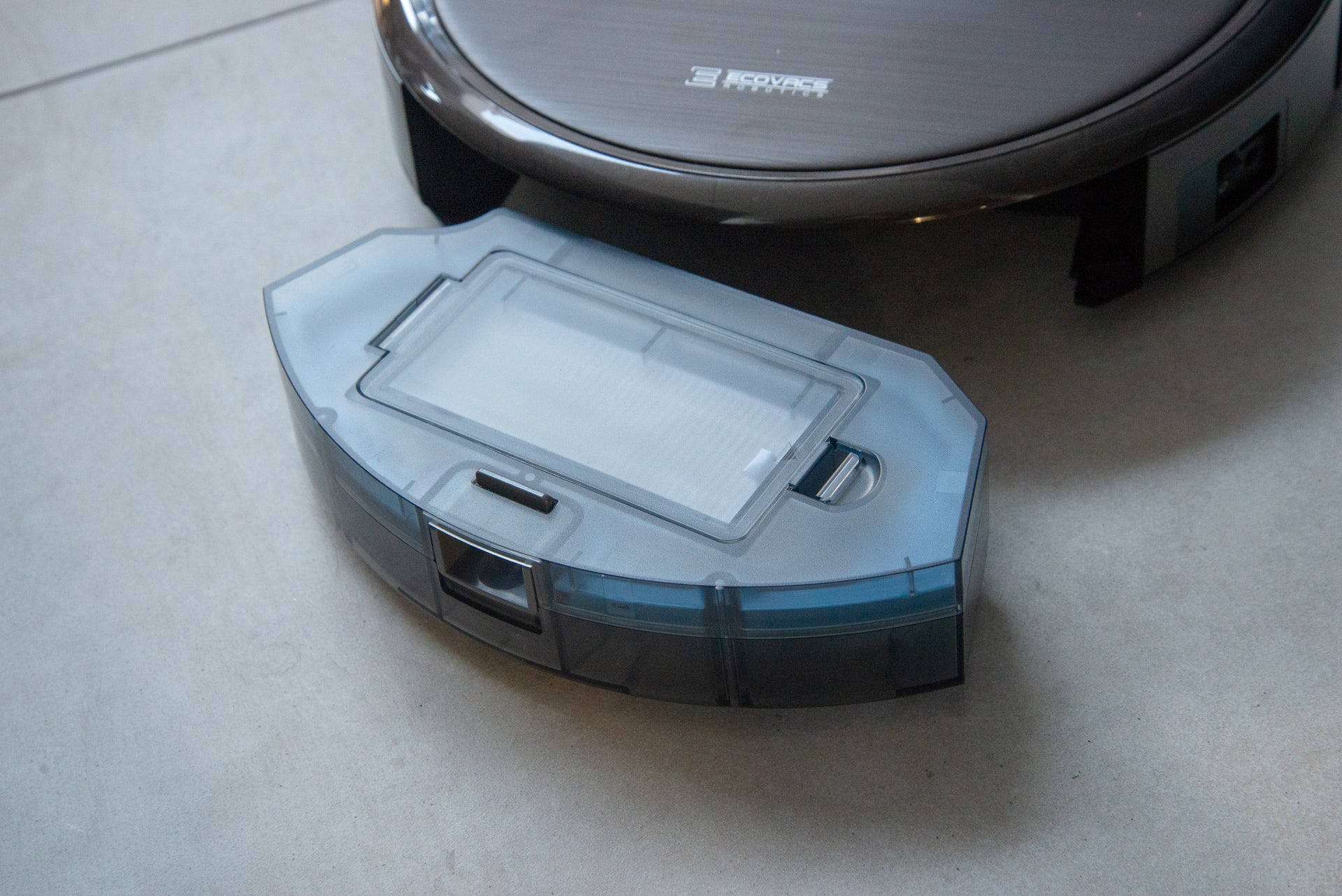 The remote control provides pretty much all the options you need, including starting all of the cleaning modes and even setting a schedule using the LCD screen. To be honest, the remote is of minimum use and I found it easier to hook up the robotto Wi-Fi using the smartphone app (iOS and Android). 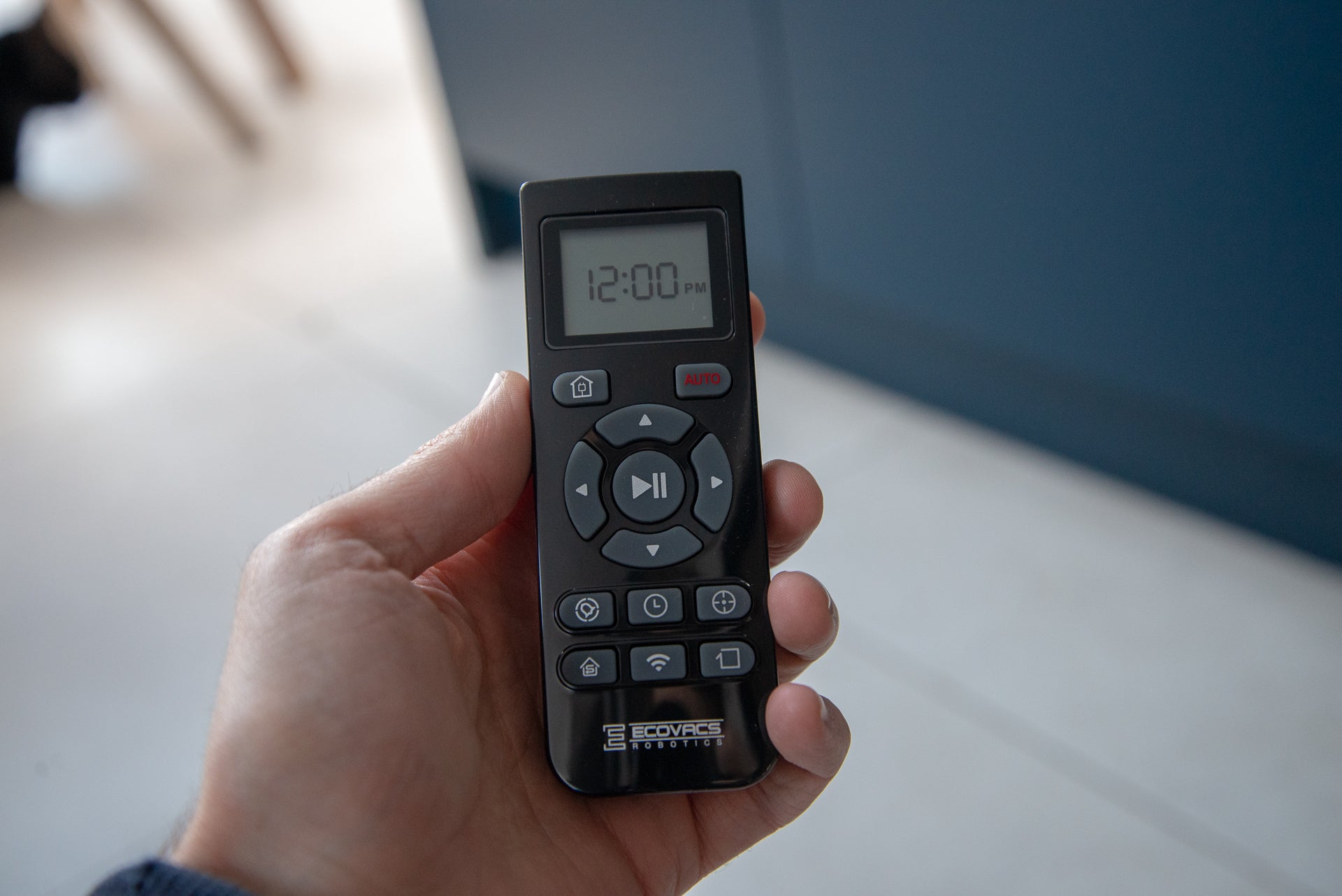 Since the robot uses more basic navigation than some models, it has multiple cleaning modes designed for different jobs. Auto will just send the robot around the room until it has to charge again; Spot starts a spiral from the starting point to clean up a specific spill; Edge cleaning takes the robot around the edges of your room; Single room is for when you have just one room to clean. 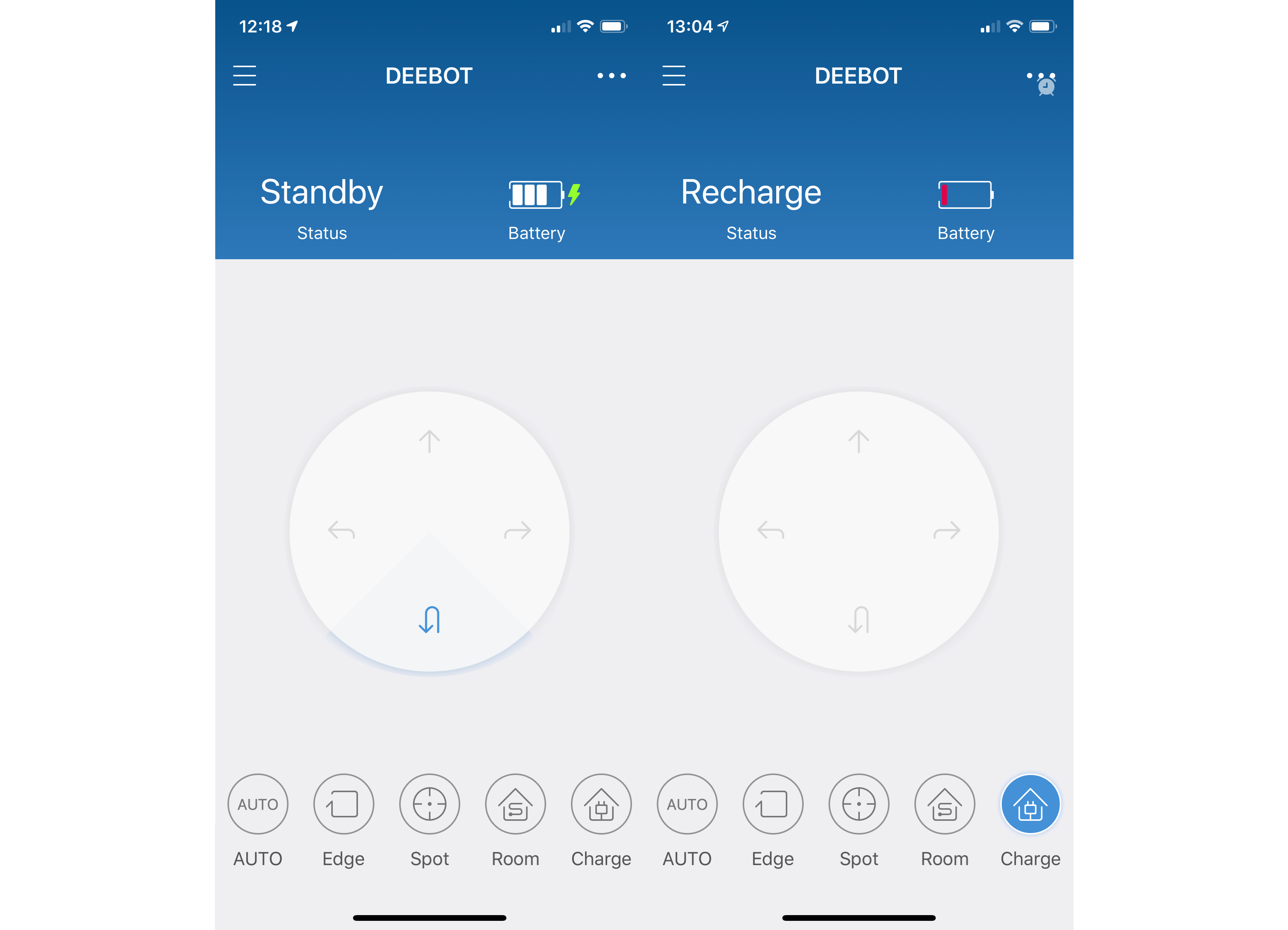 While multiple modes may be seen as good, it puts greater onus on the user to choose the right mode. You may need to try out multiple modes to get the best cleaning performance for each room.

From the app or remote you can set cleaning schedules, and change the vacuum power from Standard to Max. That’s about it.

Once connected via Wi-Fi, the Ecovacs Deebot N79S will work with both the main voice assistants. With Amazon Alexa, you can start or stop a clean or ask the robot to return to its dock. If you have more than one Ecovacs robot, you can only select one to control via the Skill.

Google Assistant control is similar, with the option to start or stop a clean, or to send the robot back to its charging dock. It works well – but again, you can only control one Ecovacs robot this way, even if you have more than one.

Ecovacs Deebot N79S – How well does it clean hard floors and carpet?

I started with hard floors using a combination of flour and carpet freshening powder, placed in X shapes in the middle of the floor and the side of the room.

The upshot is that the Ecovacs Deebot N79S takes a long time to clean a room, but it did manage to cover every spot through its slightly random movement. The spilt dust in the middle of the room was all gone with barely a trace of it left. 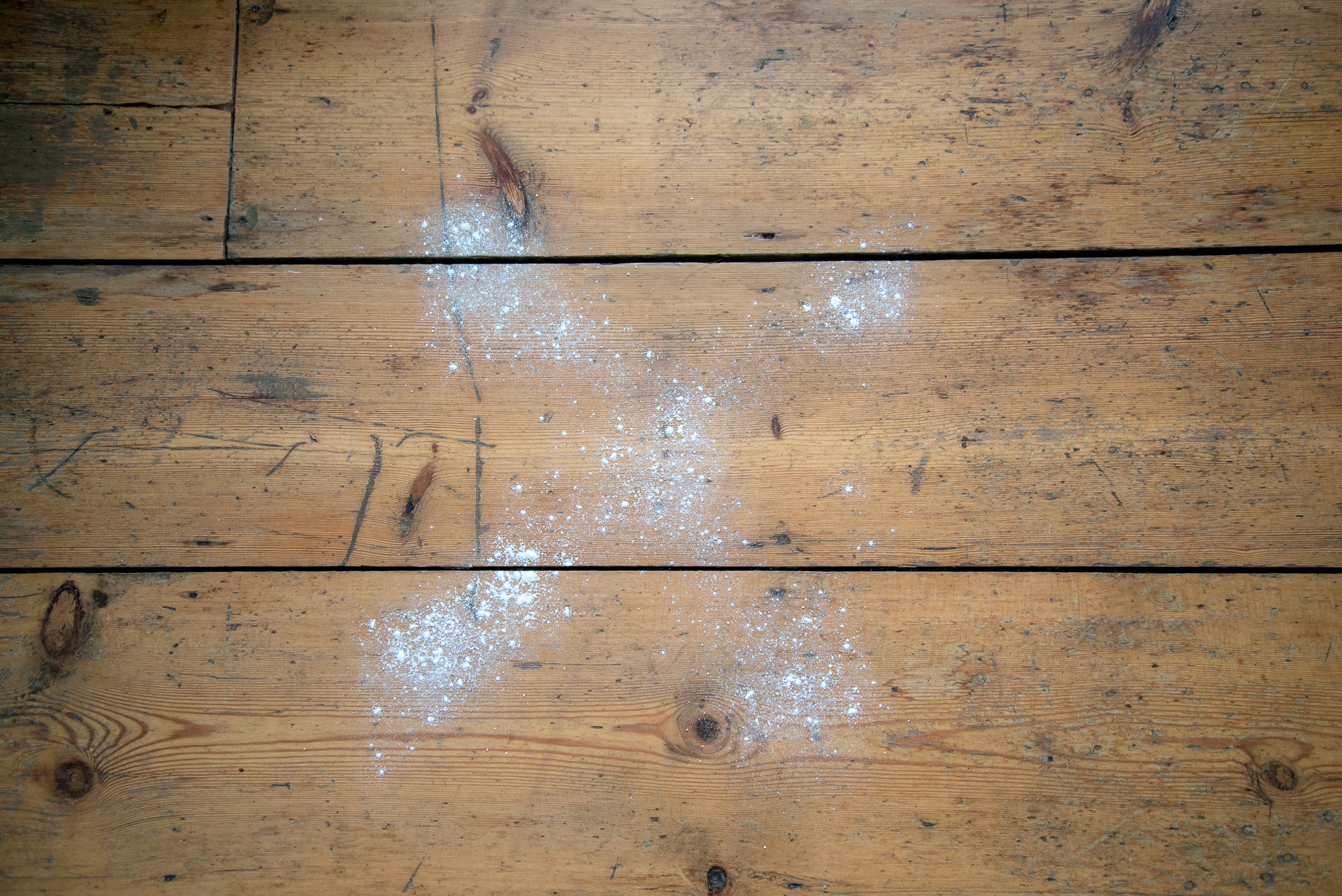 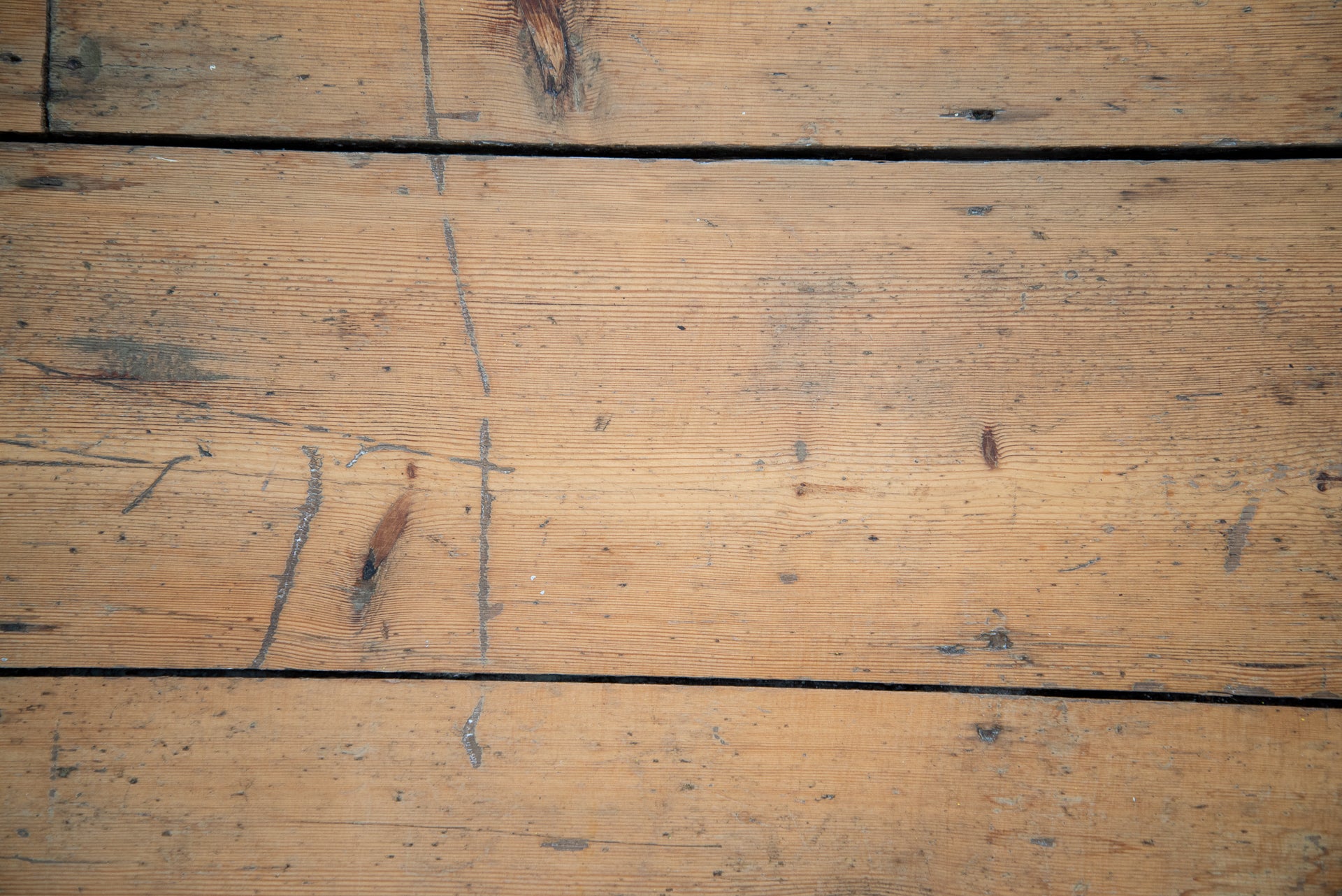 At the edge of the room, there was just a small amount of dust remaining, caught in a recess in the old floorboards. This demonstrates that the N79s doesn’t have the suction power of its higher-end competition. Even so, the level of pickup was very good considering the robot’s price. 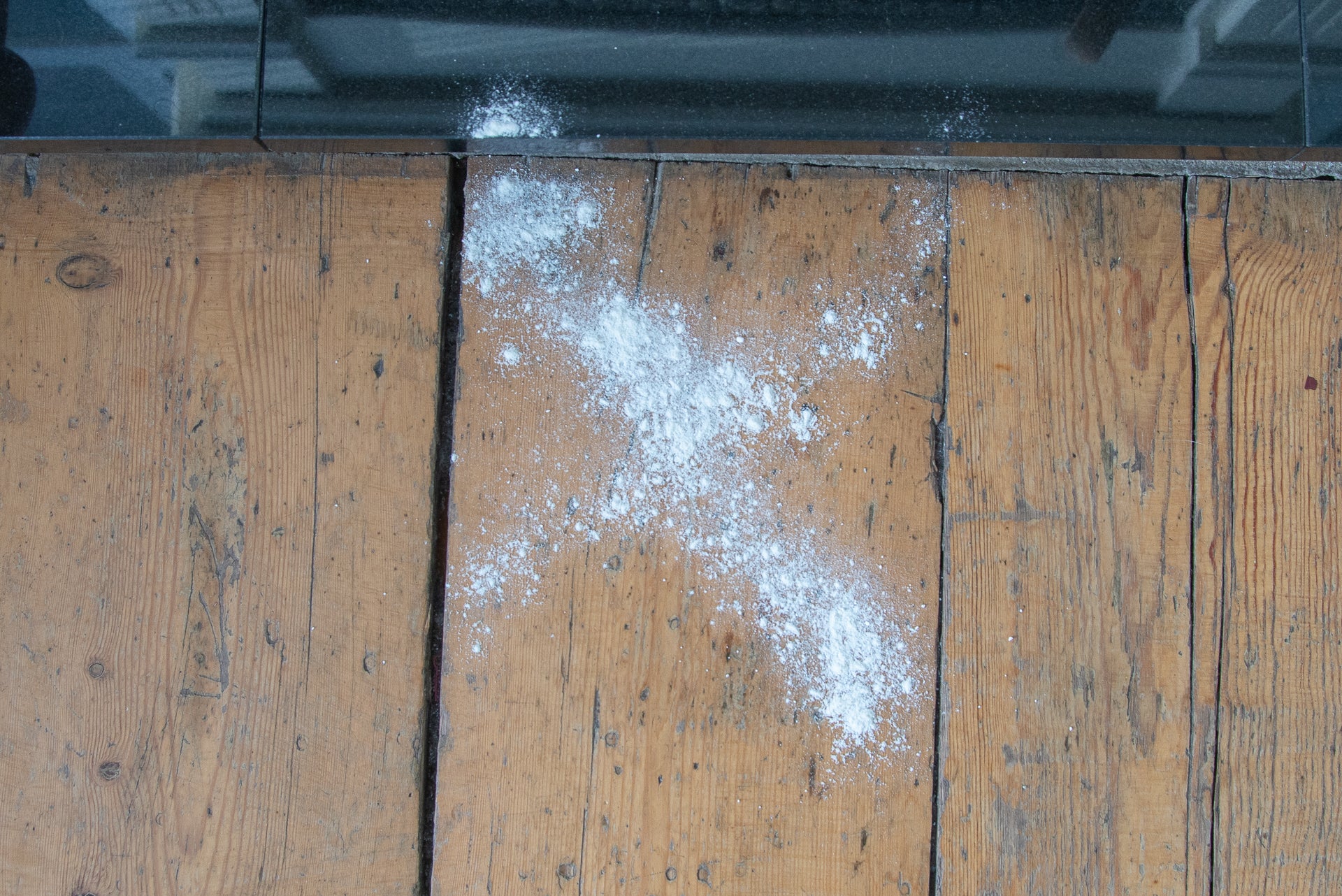 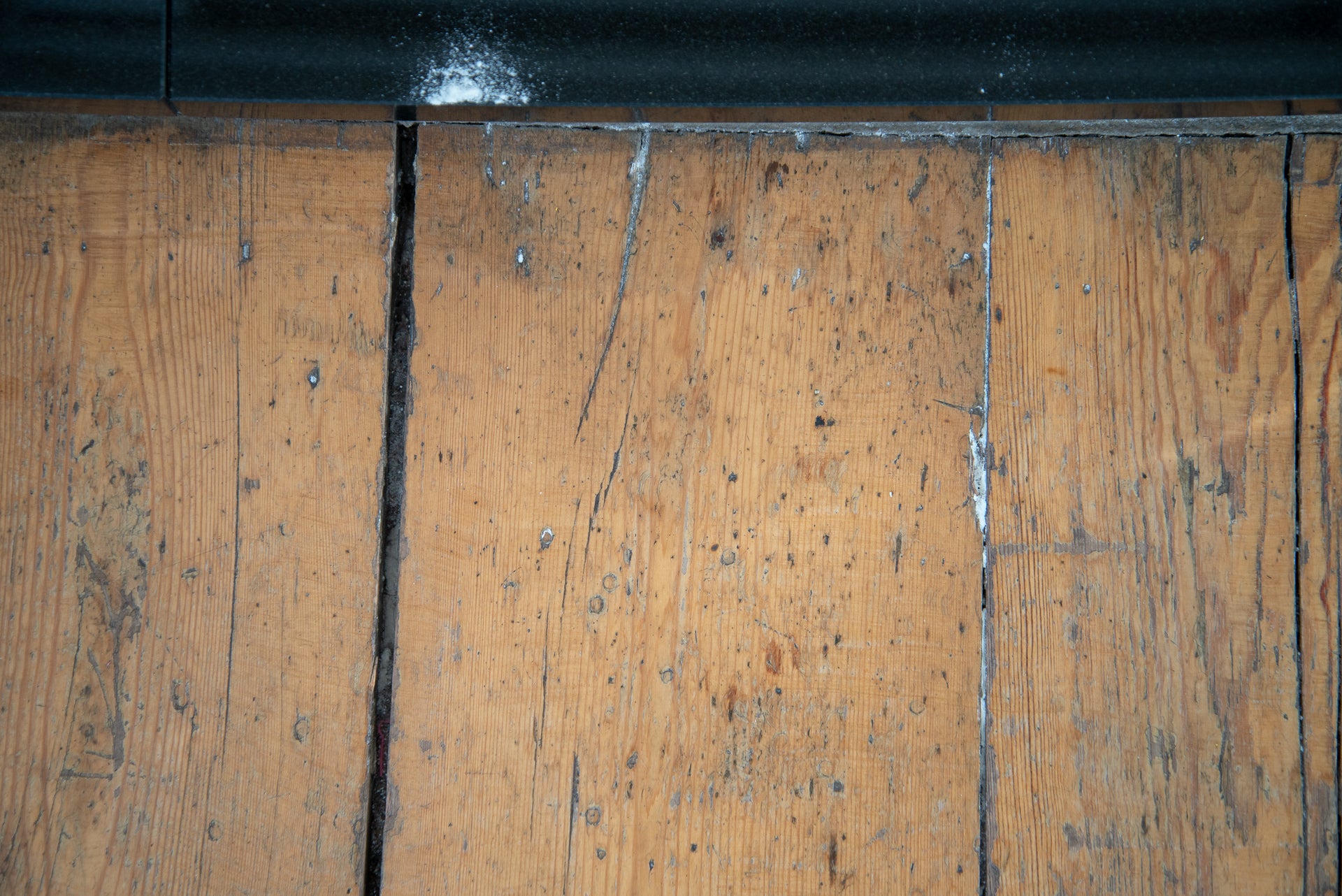 On carpet, I sprinkled another X of powder. Again, the Ecovacs Deebot N79S managed to navigate over the carpet and pick up the vast bulk of the mess. 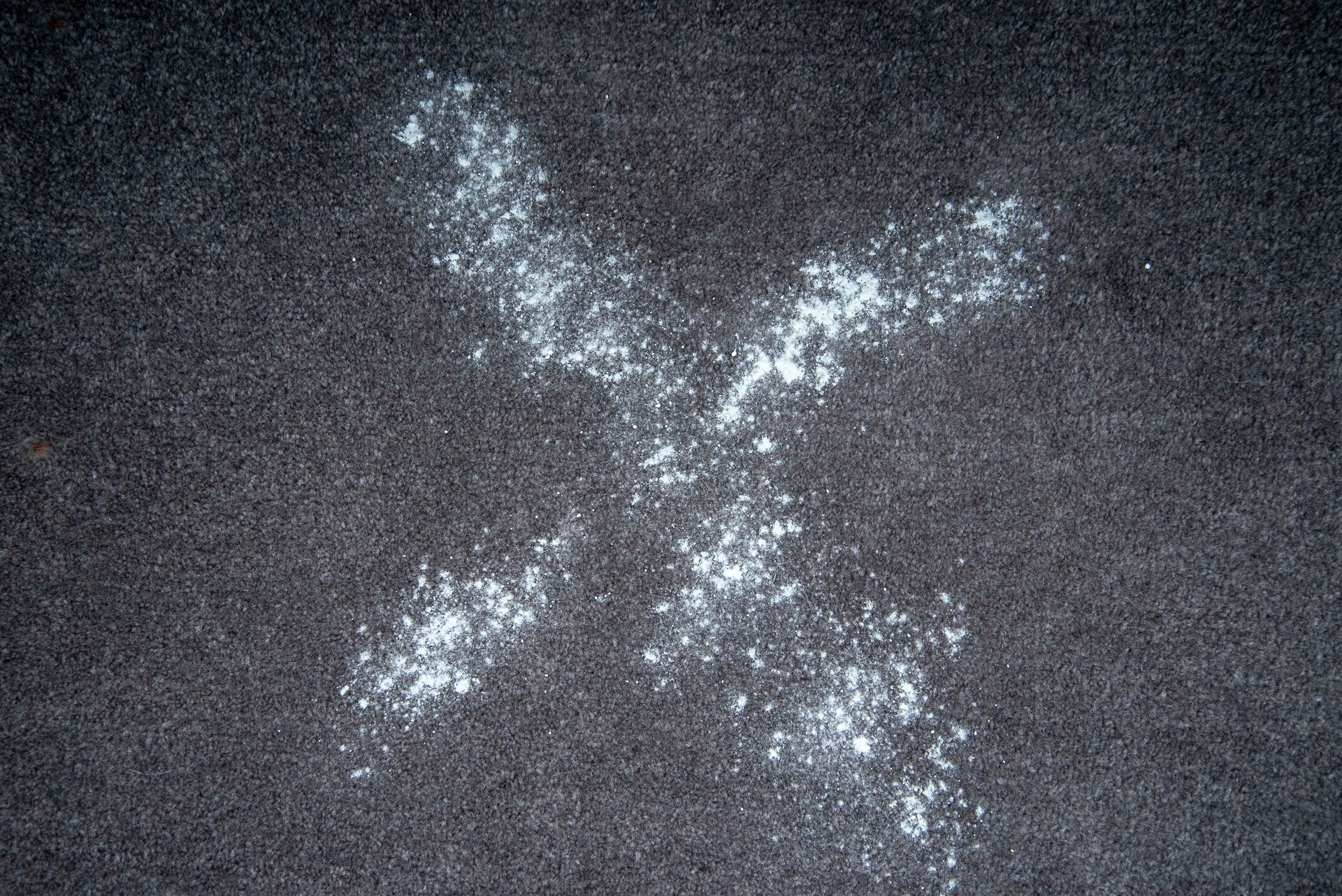 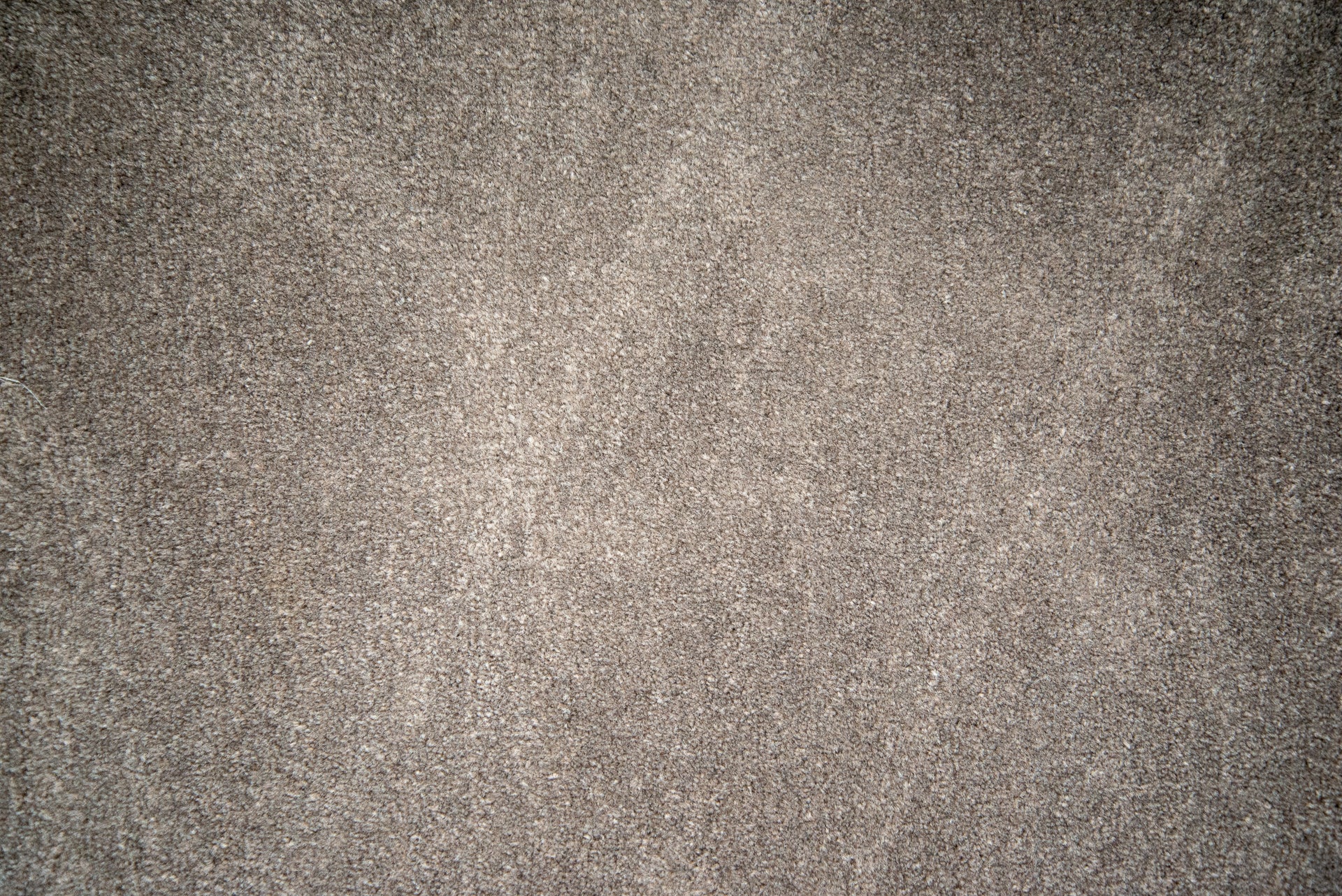 On the one hand that’s great performance, but you have to take into account that the robot was running for the best part of an hour in a single room, which can hardly be called “efficient” cleaning. With robots that feature better navigation, a single sweep takes a fraction of the time; and you can always run them again to pick up stubborn stains.

Ecovacs Deebot N79S – How noisy is it?

Running at a measured 59dB on standard mode, the Ecovacs Deebot N79S is a relatively quiet robot vacuum cleaner. I found that it was loud enough to hear, but you could clearly have a conversation over the top of it. On maximum mode, I measured it at 62.7dB, which isn’t that much louder: you can still talk and be heard over the sound of the robot in action. 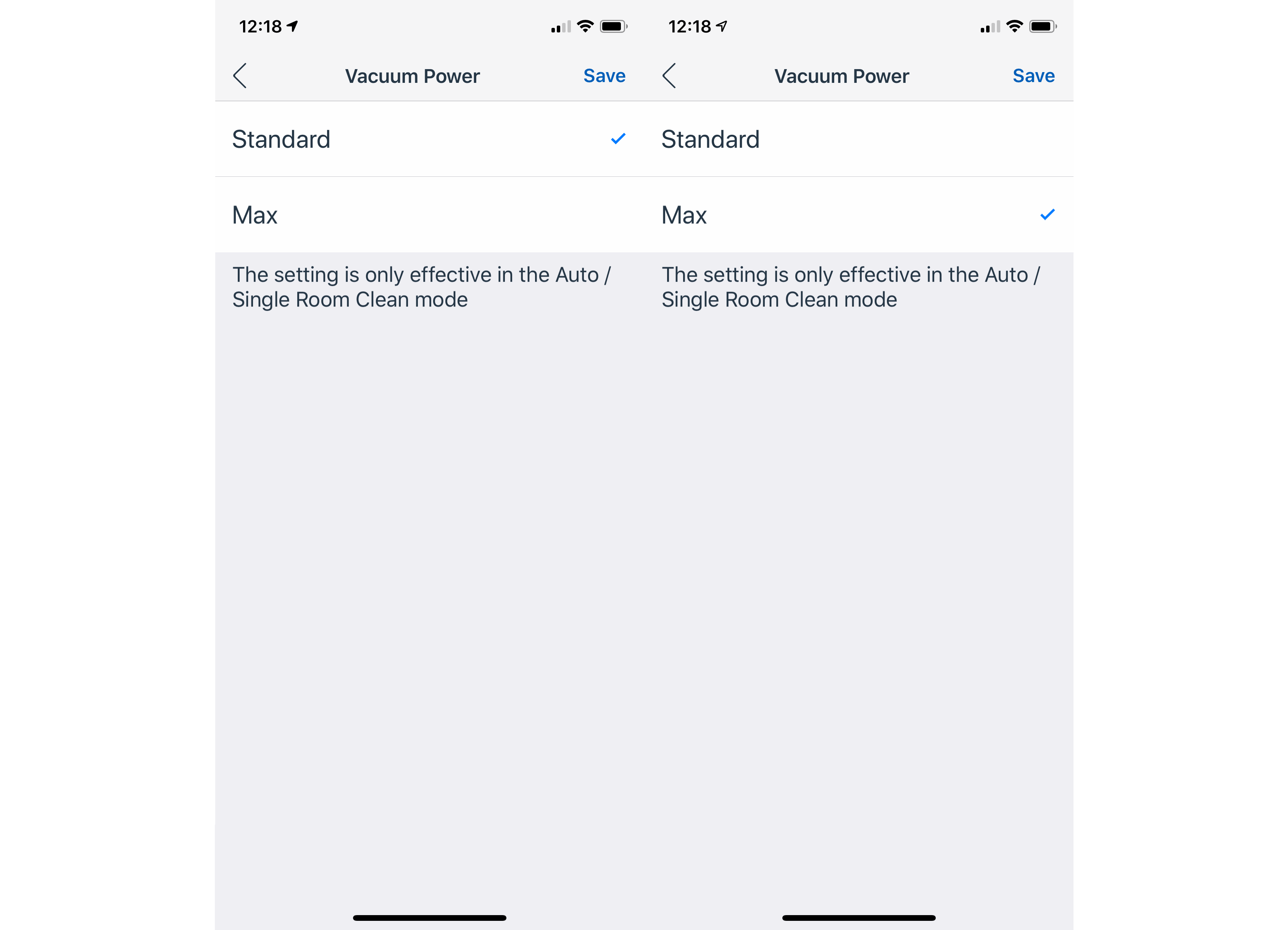 On standard mode, the vacuum cleaner managed to run for just shy of 90 minutes before returning to the dock. That was plenty of time to cover the ground floor of my house. For larger areas, it’s worth trapping the robot in different areas to make sure it has enough time to bounce around and cover each area well.

Ecovacs Deebot N79S – How well does it cope with obstacles?

The Ecovacs Deebot N79S sets off, hits an object, turns and carries on. In this way, it eventually covers most of a room, but it’s far from smart. Place it in a room with a lot of obstacles, such as dining chairs, and it’s more down to luck as to whether it will cover every area.

With robots that have better navigation and can map a floorplan, you can see them methodically shifting around, carefully moving around objects and ensuring that the entire floor is covered.

That said, the Ecovacs Deebot N79S managed to make its way around without getting stuck or trapped. The cliff sensor also prevented it from stumbling off the small step into the kitchen.

Why buy the Ecovacs Deebot N79S?

Given its low price, the Ecovacs Deebot N79S is a surprisingly good cleaner, with a few restrictions. The random navigation pattern means that the cleaner is likely to cover the entire area you want, although you can’t guarantee it. For best results, I found trapping the cleaner in smaller spaces did a good job, since it forced multiple passes.

If you need to clean a smaller area or one room regularly, such as a kitchen, the Ecovacs Deebot N79S does a good job. With the quality app and support for the two biggest voice assistants, you have a budget vacuum cleaner that punches above its weight.

If you’re looking for something a little smarter and more efficient, the Neato Botvac D6 Connected is a better choice, and you can find more recommendations in my best robot vacuum cleaner guide. For those on a tight budget, the simple Ecovacs Deebot N79S is a good choice.

The Ecovacs Deebot N79S lacks some of the smarter navigation features of more expensive models, but it gets the basics right.