Many of today’s top games suffer under the pressures and demands of being ‘good’. And being ‘good’ is not just a qualitative judgement. It also suggests a certain rhythm of play, often a degree of seriousness and a desire to hide the slightly crude nature of game mechanics under a mountain of context.

Calling upon every alien invasion trope it can get its hands on, Earth Defense Force 2025 is an homage to horror B-movies of the past – especially Japanese ones. Aliens are invading, dropping hordes of giant insects and robots onto Earth’s cities.

Even in Earth Defense Force’s world, it’s not original. The invasion plays out just like it did seven years ago in Earth Defense Force 2017. It’s split into a generous 85 missions, each of which is a skirmish or battle against an escalating force of nasties that takes between five and 20 minutes. It’s quick-fire stuff, even if the levels take place in relatively epic environments.

First you’re up against giant ants but you’ll soon be blasting away at giant mechanised beasts and huge UFOs. One of the great joys of each Earth Defense Force game is how it plays with scale – you battle against enemies hundreds of times the size of your puny solider. 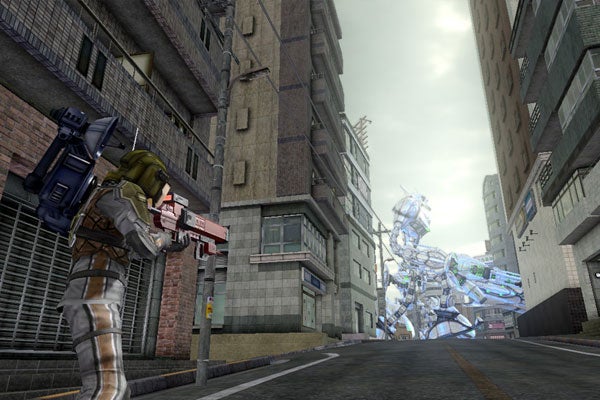 The things it is concerned with aren’t those of most shooters either. Your bullets don’t run out, there are no escort missions and it couldn’t care less if its cities get levelled – and you can take down skyscrapers yourself with a powerful-enough weapon. Your only aim is to kill the critters. The rest is acceptable collateral damage, and there’s no penalty for any of it.

This sense of chaotic abandon lends Earth Defense Force 2025 some of its arcade-y flavour, making the most apt modern comparison the twin-stick shooter. It’s a blast-a-thon. There is strategy involved – especially in the trickier of the five difficulty levels you can pick before each level – but it rests upon a great big cream pie of over-the-top-ness.

This release marks a certain return to form, too, as the last game in the series, 2011’s Insect Armgageddon, was a little more serious, especially in its visuals (and it was made by a different developer).

If you’ve played Earth Defense Force 2017 it will all seem eerily familiar. Many of the creature designs are similar, lots of the levels are, sadly, of a similar layout and while there are lots more weapons this time around – over 700 of them – the core types are pretty close. 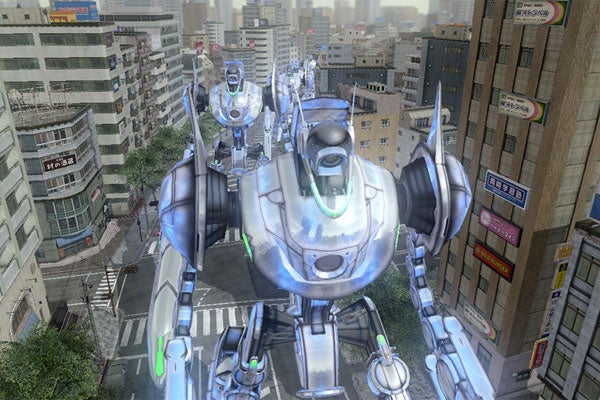 The most significant changes are Earth Defense 2025’s character classes. As well as the standard footsoldier, you can play as a jetpack’d warrior called a Wing Diver, a mechanised heavy trooper and a support solider who can call in vehicles and air strikes.

The latter is only of use for multiplayer battles, the heavy trooper is – at the developer’s admission – for advanced players only (it’s relatively slow, has more complex controls), but the Wing Diver is the most important addition.

It takes on the role of the classic ‘fast but fragile’ character class, and lets you zip around the levels far quicker than you could on foot. It’s great fun, and control of it hasn’t been ballsed-up. As much as this game appears to play things fast and loose, it gets the basics mostly right.

These additional character classes were seen in 2011’s Insect Armageddon, making Earth Defense 2025 something of a greatest hits compilation of the other games in the series. The features of one, the sensibility of the other. 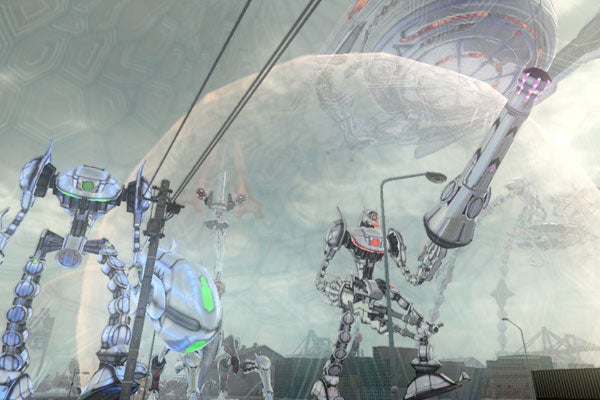 However, lots of the wonkiness that has characterised the series to date – and put off some people – is here in spades. The visuals are a few years out of date, the use of voice samples is dodgy – you’ll often hear three or four incidental characters announce exactly the same lines within a few seconds of each other – and the frame rate drops massively during moments of busy action.

Some may not like the way Earth Defense Force 2025 is structured, either. The 85 levels follow a narrative-led trajectory, and you collect guns and upgrade your characters’ health as you play. However, all the character classes are available from the start, and you can tackle the five difficulty levels as you please. There’s a level of self-motivation required to get the most out of the game.

As altering the difficulty significant changes what Earth Defense Force 2025 is like to play, though, not all that much motivational momentum is needed. The fun factor wins out. And if you want to play through the game on a couple of different difficulties – or with multiple classes – there are dozens of hours of gaming here.

Some of the most fun to be had with Earth Defense Force 2025 is in the multiplayer modes. Like the previous Earth Defense Force games, there’s split-screen two-player ‘couch’ co-op, something that is pretty rare these days, and four-player online co-op. However, we’ve been unable to try out the latter as the servers were entirely empty (perhaps being switched off) during our play time.

Should I Buy Earth Defense Force 2025?

If the inherent silliness and tackiness of Earth Defense Force 2025 is a turn-off, there’s not much that’s going to turn you around here. This is a silly, slightly tacky game – and not one offering anything dramatic over its predecessors. Developer Sandlot has found a winning structure, and is sticking to it for the most part.

Some may baulk at having to pay £35 for an end-of-cycle game that’s clearly aiming for a ‘B’ grade at best, however the sheer number of hours of gameplay make up for it a little.

It’s bound to be misunderstood, cast out by some as a brainless mess. However, Earth Defense Force 2025 is an action game that understands how to package action into fun, sugary 10-minute pills. And then offers you a sweetshop full of them.

Next, check out our best games of 2013 round-up