What is the Dualit Mini Oven?

Designed to do almost everything a full-sized oven can but in a fast pre-heating package, Dualit’s Mini Oven is a stylish solution to increase your cooking capacity.

As well as hot air for baking everything from bread to cookies, there’s a convection option that uses a fan for faster results, making it ideal for foods such as cakes, brownies and jacket potatoes. There’s even a defrost setting (using the fan without heat) and a grill for bacon, fish, chicken and, of course, perfectly browned toast – a nod to the company’s heritage and expertise in making world-class toasters.

Plus, with the ability to heat up to 180oC in just three minutes, and 230oC in five minutes, it’s as handy for everyday dinners as it is when catering for a crowd. 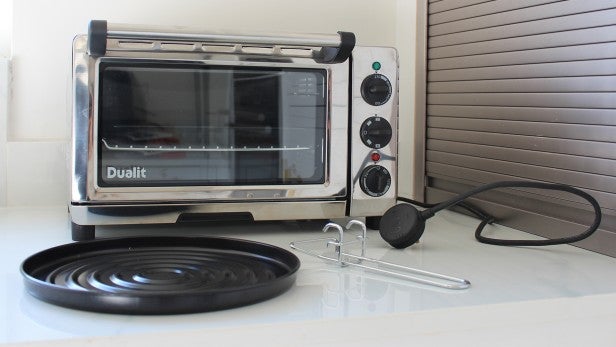 Sure, it might look like a high-end microwave, with its gleaming chrome finish and double-glazed door, but the Mini Oven is a different beast altogether. Along with its iconic Dualit styling, there are plenty of clever features that set it apart from comparable tabletop ovens, such as a full-width crumb tray that pulls out at the front and non-stick surfaces that make cleaning the interior easy. Inside, you’ll find a generous 18-litre cavity and a curved back to make housing circular dishes a breeze. 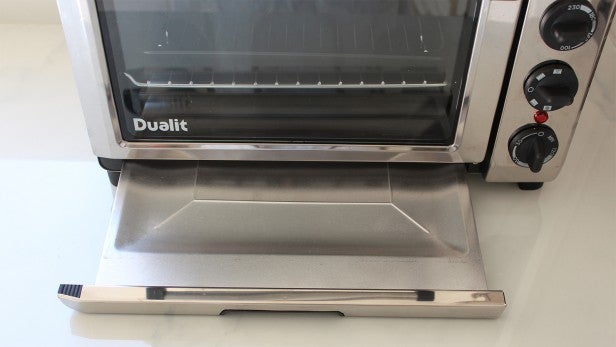 The controls have been designed to be simple to use. Three rotary dials control cooking time (up to 2 hours), temperature (from 100-230oC) and function (defrost, grill, bake and convection), while a bell sounds once cooking time has elapsed.

Accessories include a grill pan with a removable handle and a pizza pan, while the top, which heats up during cooking, can be used as a plate warmer. Lightweight enough to be moved around the kitchen as required, it even has buffers on the back to prevent it being located too close to a wall. 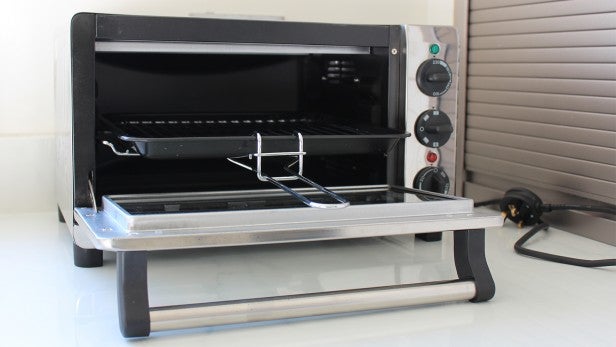 Dualit Mini Oven – What is it like to use?

Clear instructions meant that getting up and running with the Mini Oven was quick, plus there’s a handy guide to what food to cook at which temperature and on which shelf position.

I started by using the bake function to blind-bake pastry at 200oC. Selecting the exact temperature was tricky, since it’s marked in increments of 100, 140, 180 and 230oC, but selecting a midway point appeared to make the oven hot enough to bake pastry. 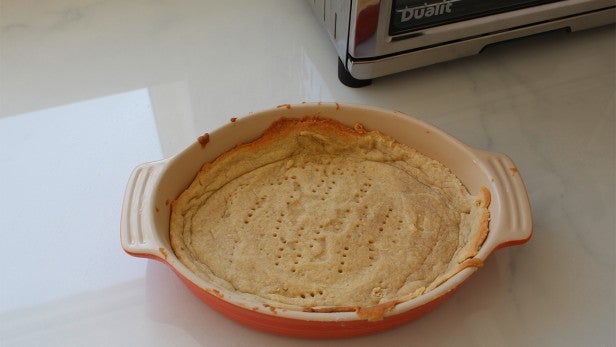 The oven heated up in less than five minutes, with a green light extinguishing once it had reached temperature. Some kind of audible ping would have been useful to denote this as well. Like the temperature dial, the timer is marked in large increments of 30, 60, 90 and 120 minutes, so I could only approximately select the 25 minutes time required to heat up and cook the pastry. For more precise cooking, a kitchen timer would be advisable. 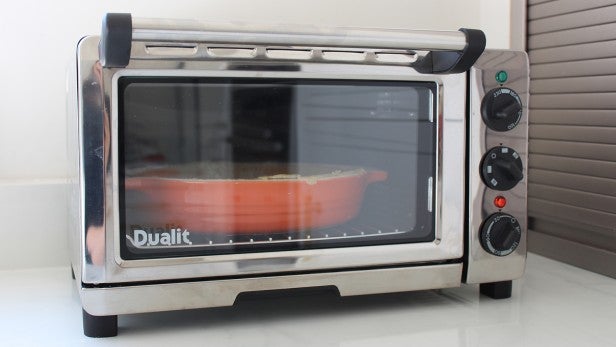 The oval dish I’d chosen fitted inside neatly, and once 15 minutes had elapsed I checked the pastry’s progress. There was no light inside the oven, so the drop-down door needed to be opened to see how brown the pastry had become. The pastry case had baked well and needed only a few minutes more to finish cooking, before adding a pie filling and baking it for a further 30 minutes. The finished pie was evenly cooked and the pastry was nicely browned. 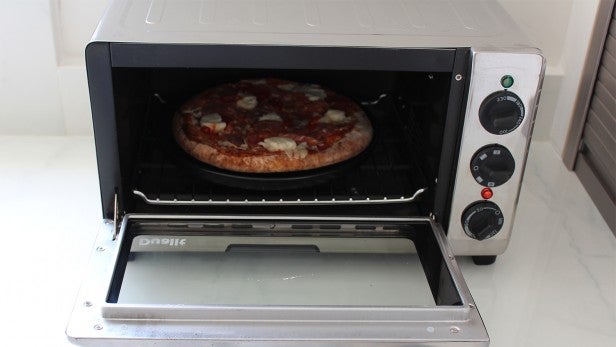 Next, I chose the convection setting to cook a frozen pizza with a deep crust. Placing it on the pizza pan, I set a temperature of 220oC as per the instructions and cooked it for around 15 minutes. Again, a light inside would have been useful to avoid having to open the oven door to monitor progress. Once the time had elapsed, the pizza was adequately browned on top and – thanks to the pizza pan – there was also some light browning on the base. The top of the Mini Oven was useful for warming a plate just before serving. 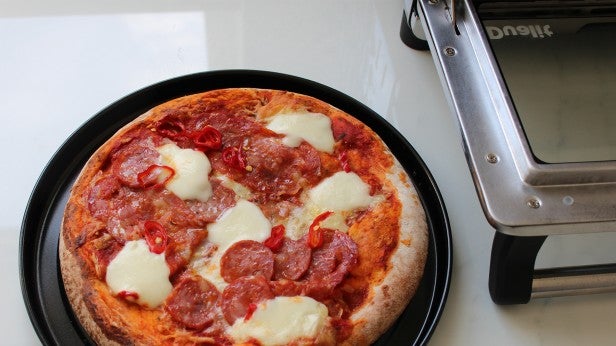 Finally, I selected the grill function at 230oC to toast slices of bread. Two slices fitted neatly onto the grill pan and the removable handle made it easy to insert and remove the pan every few minutes to check on progress. The toasting was even, with each side requiring around 2-3 minutes to brown completely.

All the accessories supplied with the oven are dishwasher-safe, and the only cleaning required was a general wipe down of the oven, a quick dry off, and emptying of the crumb tray. 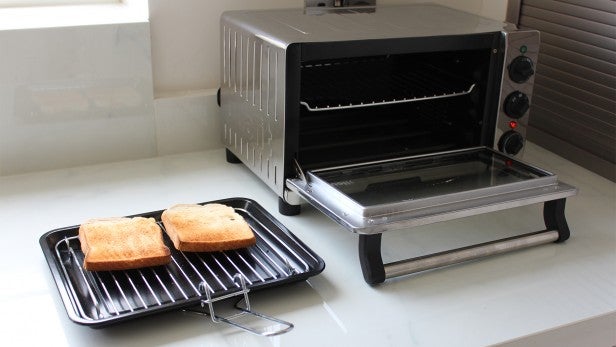 Should I buy the Dualit Mini Oven?

If cramming another oven into your kitchen isn’t an option, or if you’re a renter, the Dualit Mini Oven is a great buy. There’s minimal waiting for it to heat up and the cooking is consistent. It’s a good energy-saving option, too, since there’s no need to heat a whole oven cavity for small dishes.

An internal light and digital settings would improve the Mini Oven immeasurably, but there’s no doubting its performance and versatility. However, you may struggle to find cookware to fit inside – and small enough pizzas. 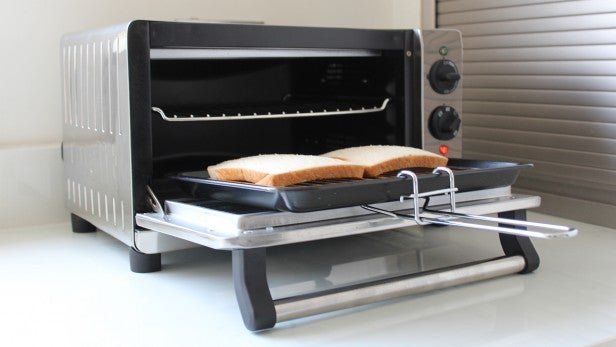 A brilliant extra oven or only option for compact kitchens, the Dualit Mini Oven is small in size but big on features.