Blimey – what a mouthful. I guess we don’t expect brevity in titles from the guys behind Dragon Quest VIII: Journey of the Cursed King, but this is getting a little bit ridiculous. Still, at least the name is descriptive: Square-Enix’s new Wii game is a member of the Dragon Quest family, Swords are involved and there is – not wishing to give the game away – a masked queen in a Tower of Mirrors at some point in the game. The key word in all this is Swords. Anyone wanting an epic RPG on the lines of Dragon Quest VIII should look elsewhere. This game looks, sounds and even has some of the atmosphere of that fine PS2 adventure, but it plays very differently indeed. 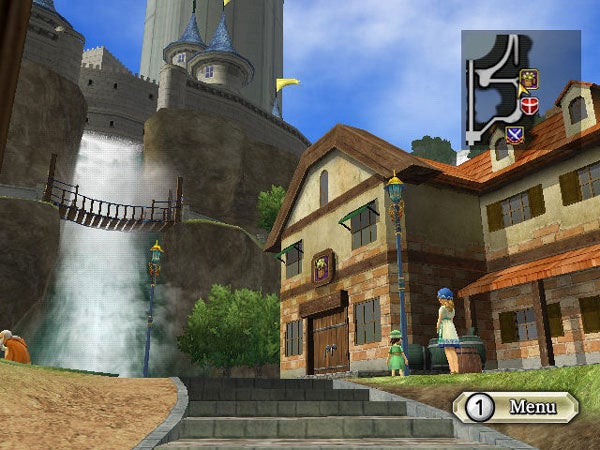 In fact, I’d say the closest reference point is probably Resident Evil: Umbrella Chronicles. Like Capcom’s survival horror gun game, it’s an offshoot of the main series retooled and conceived specifically for the Wii. It has some of the features you’d expect from a regular Japanese RPG, like a plot, quests, monsters, treasure and a town in which you can buy new weapons and armour, but the real gameplay is more akin to an on-rails gun-game than a proper free-roaming RPG. At first, this may come as a shock. After a brief tutorial section that covers the basics of swordplay (more of this later) you’re free to roam the town, using the D-pad at the top of the Wii remote to walk forwards and backwards or rotate your view left and right. You can use the onscreen pointer to select and talk to the members of the game’s small cast, buy the few items of equipment you can afford and then get ready for your first exploration of the world outside the town gates. 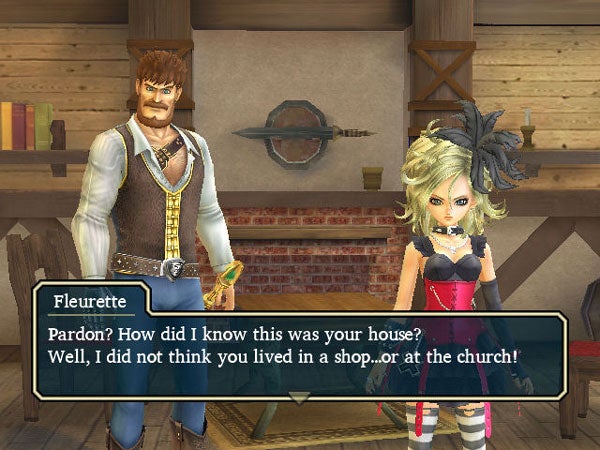 The graphics are a reworking of the same lovely cel-shaded cartoon visuals we saw in Dragon Quest VIII – though a few new water and surface lighting effects make them arguably even more appealing – and the incidental music even quotes directly from that game. Even the dialogue – another cracking translation with warm English voices and some wonderful touches of self-aware humour – will be familiar to Dragon Quest VIII fans.


Once outside the gates, however, everything changes. One of the great pleasures of Dragon Quest VIII was having this huge cartoon fantasy kingdom to explore, knowing you could roam almost anywhere the eye could see, In Dragon Quest Swords (we’ll leave the rest out from now on to save my fingers) the town effectively acts as a hub from which you can enter one of several mission areas. Within these areas, your movement is limited; you can walk forwards and backwards and look a little to either side, but basically you’re glued to a path. And as in any old-school gun game, the purpose of that path is to put you in the way of monsters.

This is where the swordplay comes in. By holding the remote forwards and level and swinging it horizontally, vertically and diagonally, you can unleash a number of cutting and slashing attacks on the enemies in immediate range of your virtual blade. Stabbing the remote forwards will – if you’re lucky – administer a piercing thrust attack. For groups of larger enemies, merely swinging wildly may suffice, but in many cases you’ll need to focus your attacks beforehand by using the remote to aim the onscreen cursor and select the point you want to hit. You’ll also need to defend yourself from enemy attacks, by pressing and holding the B trigger beneath the remote to wield your sturdy shield. Basically, you trundle your way along the path using the sword to whack anything in front of you and the shield to stop anything hitting you. You might say that it’s a little more simple, accessible and direct than your usual action RPG. Or you might say it’s simplistic and leave it at that. 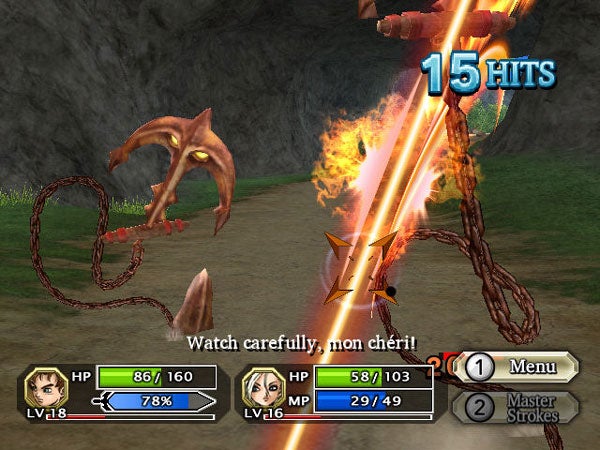 Of course, it’s not quite as basic as that. Some enemies fire missiles, and some of these missiles can be returned to sender by focussing on the point of impact and swiping with your blade at the right time. Some explosive enemies can be repelled with a well-timed thrust, blowing up instead in their evil comrade’s midst. There are treasure chests to discover and little secret items that can be unearthed, and each mission area has a few branching pathways giving you a little bit of choice as to what route you take from start to finish.


Finally, each mission ends with a climactic boss battle. Here it’s mostly a case of observing patterns and deploying sword and shield accordingly, but these are also the moments at which you’ll unleash your finest moves – or master strokes. You start with one, and you’ll unlock more by gaining levels or new weapons. Press the 2 button at the bottom of the Wii remote, repeat the gesture being shown on screen and you can administer a super-potent blow that will wipe a healthy chunk from the boss’ health gauge. And, as a bonus, you may feel extra-heroic for a second or two as well. Do it standing up and let out a manly roar for the full effect. 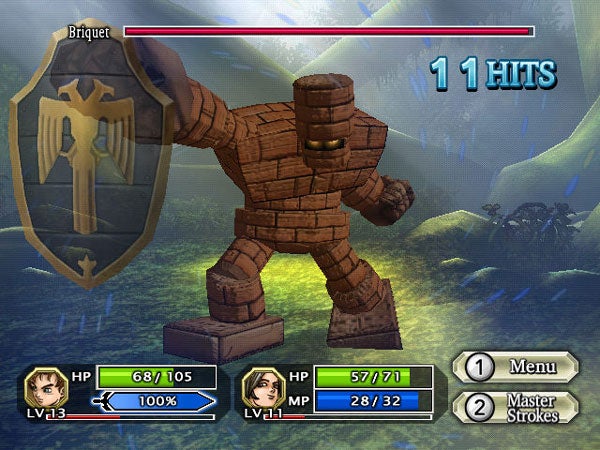 Dragon Quest Swords hasn’t forgotten entirely about good old fashioned RPG features like parties, spells or inventory management either. On missions after the first you’ll be accompanied by another character whose main responsibility will be spell casting. You don’t control them directly – though you can activate specific spells on demand, providing they have magic points available. Instead, you can allocate tactics to them from four simple options, ranging from ‘just keep us healthy and away from death’s door’ to ‘forget restraint: just blast that git to kingdom come.’ You can also heal yourself (or them) using bought or found herbs and potions, and you may need additional materials to restore your shield when it’s taken too much damage or bring an expired ally back to life.

Now, all this is fun. As in any regular light-gun game it’s the different attacks and patterns of the enemies that keep things interesting, and some of the environments you’ll find yourself fighting through are surprisingly evocative or atmospheric. The sword controls don’t really convey much of the feel of a real blade and the thrust move is a nightmare to pull off quickly, but, generally speaking, slashing and swiping at your TV is more entertaining than it probably sounds. The monsters are in the slightly zany Dragon Quest mould, but you get some amusing oddball critters, and the characters and the tale have enough charm and intrigue to keep you ploughing through until the end. 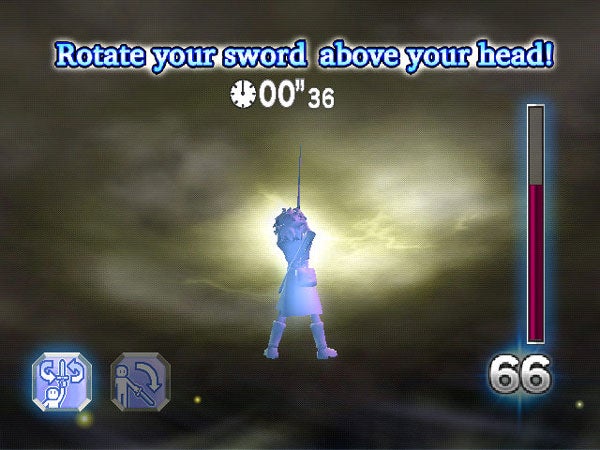 But by now you’re expecting a however – and here it is. On the one hand, Dragon Quest Swords isn’t a particularly long game. There are only eight mission areas and most of them take fifteen to twenty-five minutes to work your way through. All the same, it will take you longer than five hours to complete just because the later missions get reasonably tricky – particularly the boss battles – and, should you die, you have to start them again from square one. If you’re really stuck, you can grind your way through earlier missions again to improve your high score and earn more experience and gold, enabling you in turn to upgrade your weapons and armour. All the same, I’m not sure that I’d really call this added value. 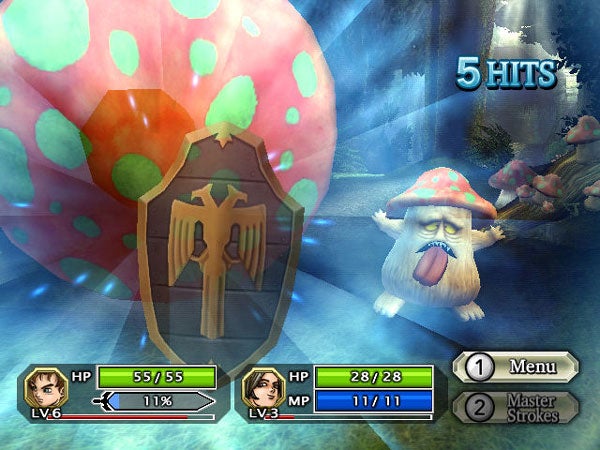 On the other hand, you wouldn’t really want much more of Dragon Quest Swords than you’re getting. There’s no getting past the fact that the action is very repetitive and that there isn’t really that much depth to the gameplay. Sure, there are some cute mini-games in town to add variety. True, the game includes a primitive weapon crafting system. All that notwithstanding, I can’t imagine anyone wanting to plough through the same levels again and again in search of score perfection, and once you’ve cracked the game once, I doubt you’ll feel inclined to go back for more. 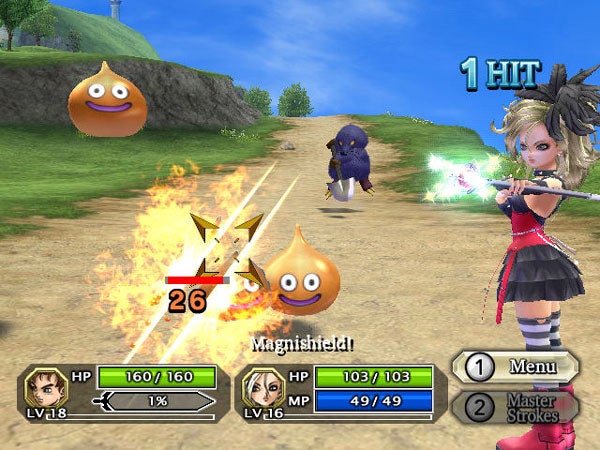 In other words, it’s fun for the shortish time that it lasts, and you wouldn’t want it to last any longer. Given the price tag that’s not exactly much of a recommendation. Basically, it’s not a keeper – it’s a game that anyone who enjoyed Dragon Quest VIII or who just fancies swinging away with a virtual sword should definitely think about renting, but you’d be a bit silly to buy it. This is a shame, because every now and then you get a glimpse of what a proper action RPG with the first-person view, the swordplay, the playful atmosphere and these graphics might have been – and that would have been a Wii Dragon Quest to treasure. This is an entertaining little distraction, and that’s all.


An interesting attempt to make Dragon Quest action-packed and accessible, but it’s too limited, too short and too repetitive to give you anything more than the odd hour of casual fun.