Doro’s phones are aimed at oldies, but not the type of oldies that are happy to use the latest iPhone or Android smartphones. Instead they’re targeted at people who struggle to use those types of phones either because they find them too complicated or they have limited dexterity in their fingers, suffer from poor eyesight or are hard of hearing. As such, the Doro PhoneEasy 612 is designed from the ground up to be as easy as possible to get the hang of.

There are plenty of other phones on the market aimed at seniors, including the incredibly simple Cycell EasyPhone, and handsets from Emporia. However, Doro’s models arguable offer a better balance between features and ease of use.

The PhoneEasy 612 sits towards the middle of Doro’s line-up of phones as it includes a camera — something missing form the entry levels phones — and also comes with an easy-to-use charging dock. Nevertheless, it’s still very affordable, as it’s available for free on contract or for around £70 on pay-as-you-go. 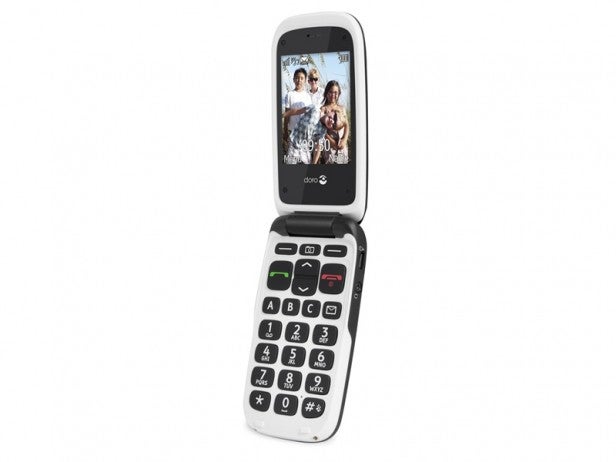 Doro has opted for a clamshell design on the PhoneEasy 612 in part because it means that users don’t have to lock the keypad before they put the phone in their bag or pocket. Once the clamshell is shut the keypad is protected so numbers can be accidentally dialled.

This model is made entirely from plastic, so doesn’t exactly look classy. However, Doro has added a roughened texture to the top of the outer part of the phone and used a rubberized finish on the battery cover. Both help to make it pretty grippy to hold, which is important for its target audience. It’s fairly large too, measuring 100mm tall when closed and 190mm tall when open, but we don’t think this is a negative as it means there’s plenty of room for a large keyboard and screen.

In fact, the buttons on the keypad are much larger than those on a normal phone and also have a more grippy finish to make them easier to press. Above the standard number keys Doro has added three shortcut buttons marked A, B and C, which can be assigned numbers for speed dialing friends, family or medical services.

Next to these there is a dedicated button to take you to the SMS screen and above this you’ll find double height buttons for the call answer and call end buttons as well as big up and down buttons to move you through the 612’s simple menus. These are used in conjunction with two software buttons that are mapped to the various functions that appear on the screen when you’re in the phone’s main menu.

Our only real complaint in terms of design and layout is that given the size of the keypad buttons, the two shoulder mounted volume keys are rather small and tightly packed together, so they may not be as easy to use as they should be for those with dexterity problems. However, we do really like the assistance button on the rear of the phone that can be used to automatically dial a list of numbers when the button is held down in an emergency, but we’ll look at this in more detail later. 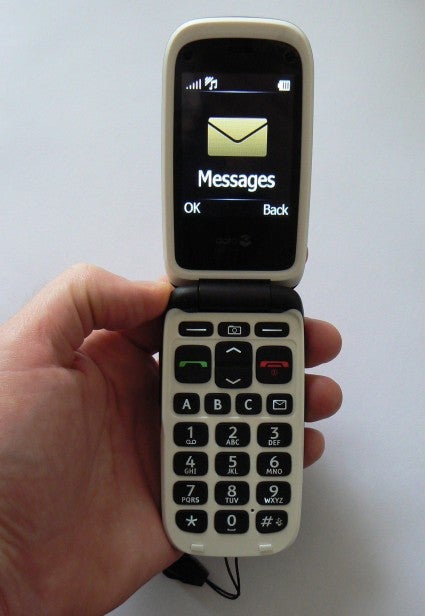 This model has a microUSB port that’s used for charging the phone and transferring pictures to a PC. It also comes with a chunky, desktop charging dock that’s very easy to slide the phone into, especially as it is designed so as to make it impossible to insert the phone into it the wrong way round.

Underneath the microUSB port there’s a miniature headphone jack for use with the supplied headphone/headset. Unfortunately, this headphone jack is non-standard so you can’t use the phone with a normal set of headphones unless you get an adapter. Nevertheless, Bluetooth is supported for use with wireless headsets or hearing aids. In the box you’ll also find a lanyard so that the phone can be worn around the neck. However, the clip that the lanyard slides into is under the battery cover and it’s a bit fiddly to attach.

The screen on the PhoneEasy 612 relatively large for a clamshell handset, as it measures 49x36mm. The resolution isn’t amazing at 320×240 pixels, but it’s more than enough for this type of phone as there are no internet features and the menu system only really shows one large icon on the screen at a time. The display is very bright too, and unlike a lot of cheaper phones it’s easy to read even when you’re looking at it from an angle. 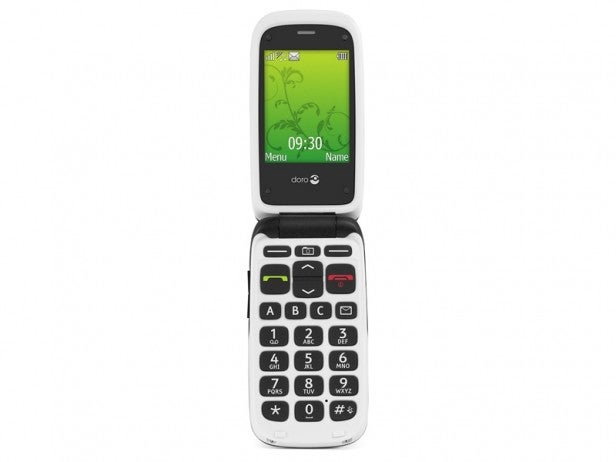 The phone’s menu system is very straight forward and reminds us of older Nokia handsets. The main menu is a series of pages that you scroll through with the up and down buttons on the keypad. Each page shows just a single large icon related to its function, so they’re very easy to read and navigate around. You can also increase the size of the text, which is neat.

The ear piece is a tad louder than a normal phone, although not excessively so. What is different, though, is that at full volume it remains very crisp and clear with none of the distortion that typically affects cheaper phones when they’re set to full volume. Battery life is also top notch. Doro quotes a talk time of 12 hours and standby time of around three weeks and these figures seemed pretty accurate from our experience with the handset.

The three quick-dial buttons on the keypad are fairly easy to program and it’s also relatively straight forward to set up the assistance button. The latter allows you to assign up to five numbers to the button so when it’s held down it repeatedly dials each one on the list until it gets an answer. You can also set it up to send an emergency text as well in case nobody picks up for the emergency call. 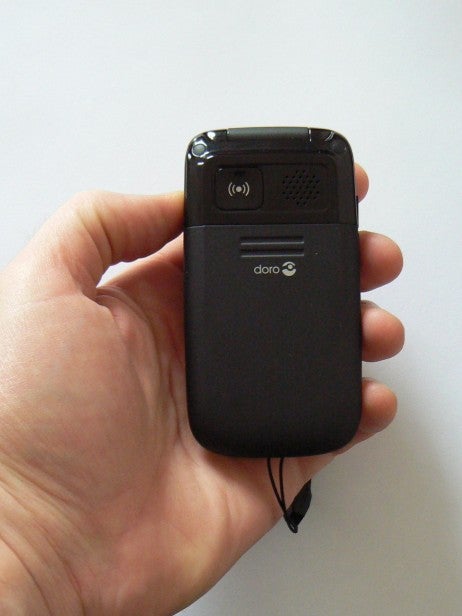 In other respects the PhoneEasy 612’s specification is pretty modest. There are no internet or social media features, but you do get a calendar function and it has a built-in FM radio that you can use when the headset is attached. This has good reception and although it doesn’t have RDS it does allow you to save stations as presets and assign names to them.

Unlike the more basic Doro models, this one has a camera onboard. However, it’s a very basic snapper with a two-megapixel resolution. Shots look pretty decent on the phone’s screen, but when you transfer them to a computer via the handset’s microUSB port they tend to look very soft and blurry and colours aren’t very accurate either. It also struggles in low light, especially as it lacks an LED flash to help it out in darker conditions. For storing pictures there is 8MB of memory built in, but you can boost this as there’s a microSD slot for adding memory card. 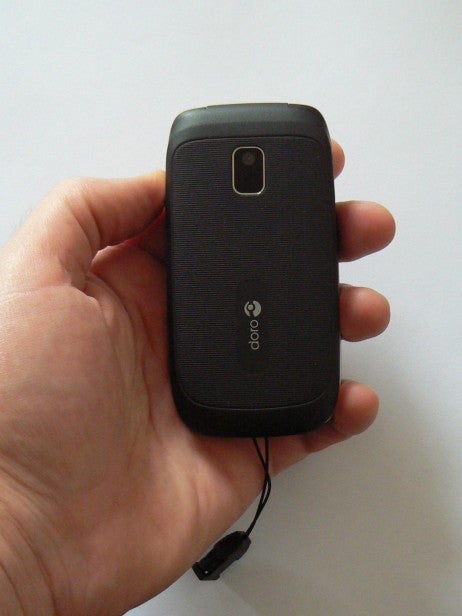 Verdict
Unlike a lot of handsets aimed at seniors, the Doro PhoneEasy 612 is more than just a very basic mobile phone. Instead this handset has been properly crafted from the ground up to make it as easy as possible to use. Its menu system is very straight forward, the keypad is big and roomy and there are some good features such as the emergency assistance button on the rear. As such, we think it’s a good choice for those who, for one reason or another, just can’t get on with many of today’s more advanced mobile phones. 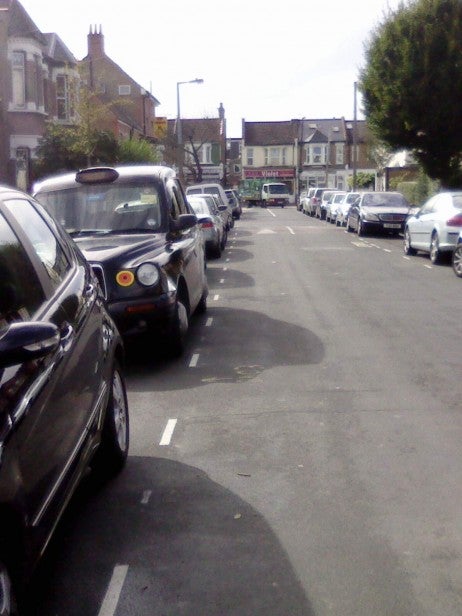 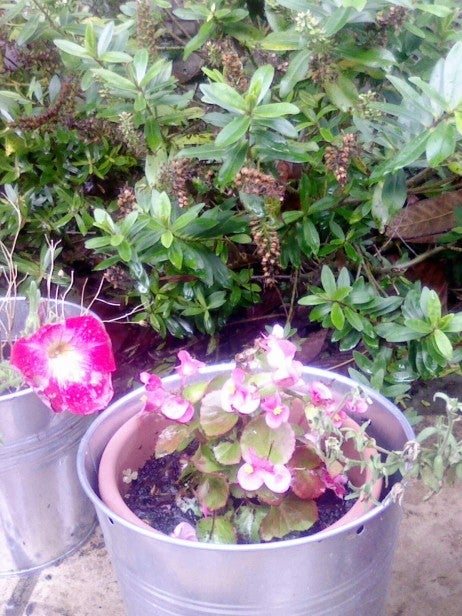 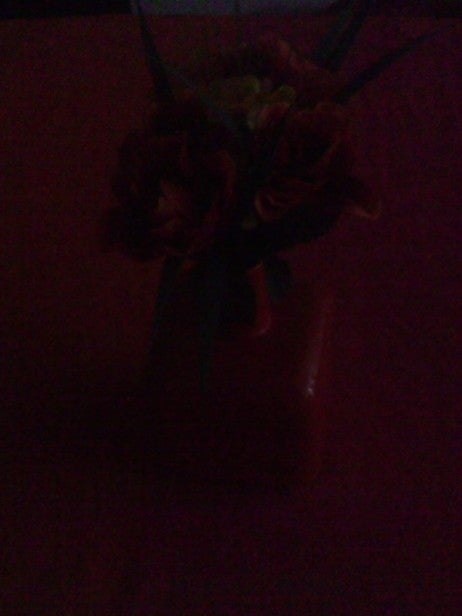