A high quality accessory for the Mavic 2 drone, but non-pros are unlikely to get their money’s worth.

What is the DJI Smart Controller?

DJI’s Mavic 2 drones are among the most user-friendly flying cameras around, but that doesn’t mean there isn’t room for improvement.

One area that flyers have been keen to see upgraded is the controller, which is why DJI has just released a new accessory called the DJI Smart Controller.

This peripheral is a quality-of-life add-on for DJI’s OcuSync 2.0-based drones – this currently only the Mavic 2 Pro and Mavic 2 Zoom, but we’d expect it to be compatible with most future DJI drone models.

Usually, you’d use a smartphone or tablet plugged into DJI’s standard controller and running the DJI Go app to pilot these drones, with your device’s screen relaying information, a live video feed from the drone’s camera and the ability to interact with the drone via touch controls.

The Smart Controller replaces this setup, and is designed to offer a more robust, professional-friendly way of controlling your drone.

At £579 on launch, it’s an expensive upgrade – so is it worth the investment? 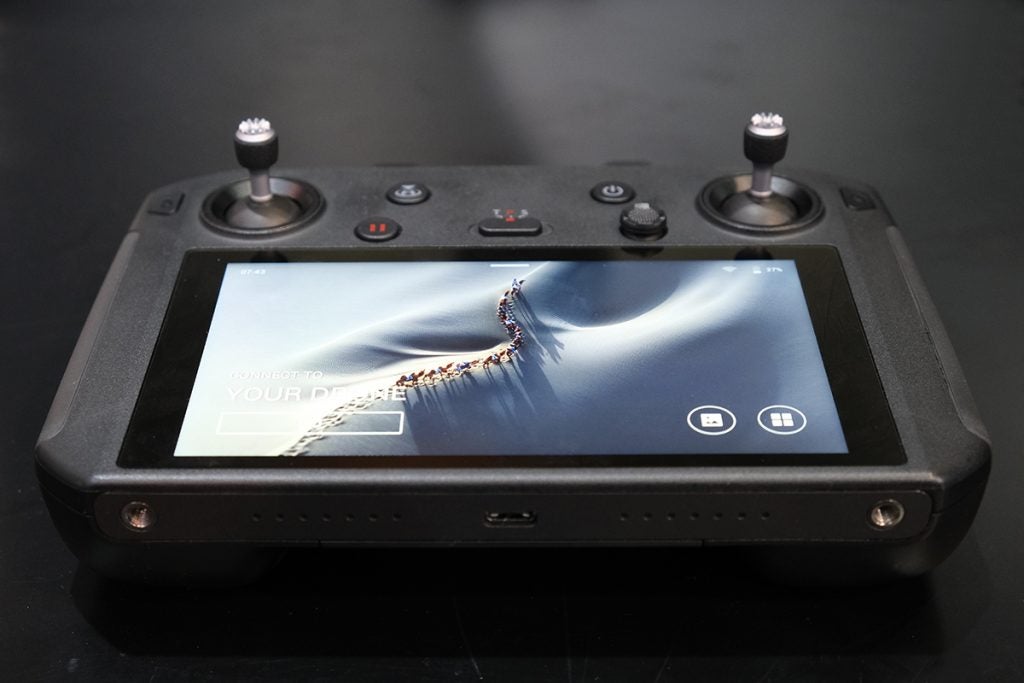 The DJI Smart Controller is effectively a cross between a 5.5-inch Android phone and the Mavic 2’s existing controller.

In the hand, it feels chunky and well built, with its generous grips giving it the balanced feel of a DSLR. Tough plastic is the primary material, some of it slightly textured to aid grip, and there isn’t a hint of creakiness or flex anywhere. 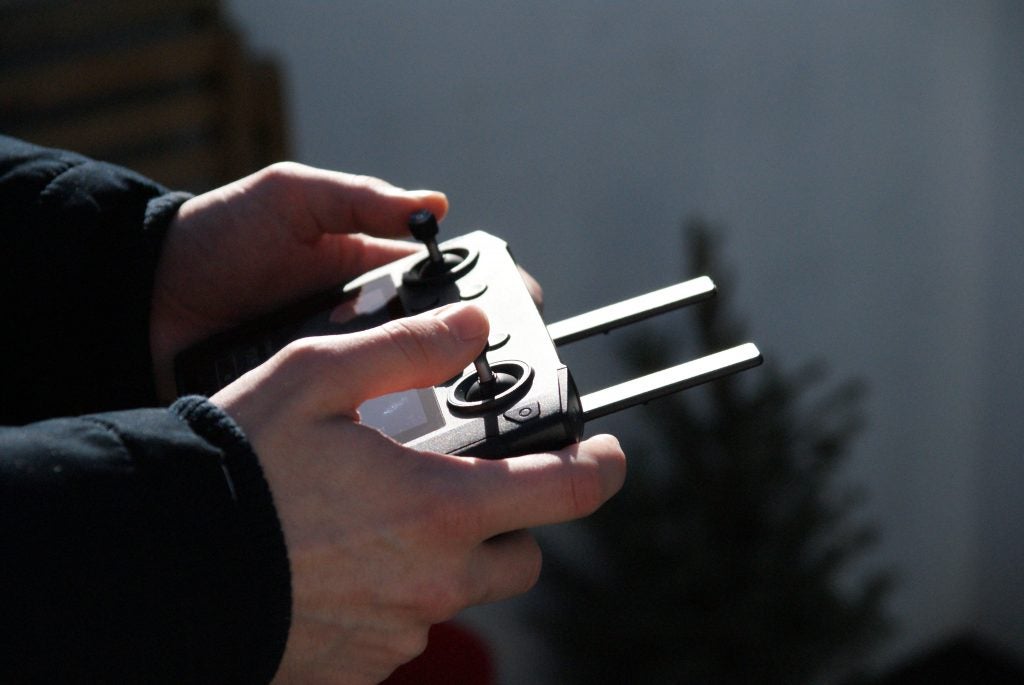 It certainly feels better to hold than the slightly awkward Mavic controller bundled with the drones, and the larger, better-spaced buttons are easier to hit – although we’re not sure there’s enough of an ergonomic improvement to warrant the extra money. 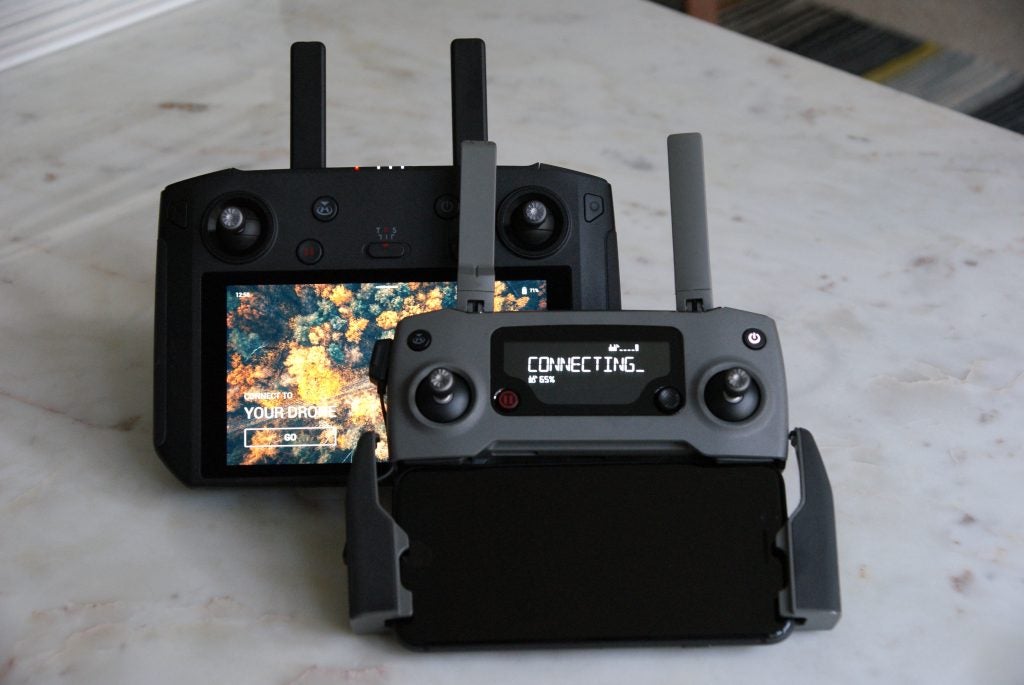 Overall, it feels less cramped than the existing Mavic 2 controller (above). The joysticks are a little further apart, and the Smart Controller has the added benefit of ensuring that your hands won’t cover the screen when you’re flying and trying to see the screen preview.

The controller’s toughness extends beyond the rugged exterior. It’s also built for extreme environments, able to operate in temperatures as low as -20ºC and as high as 40ºC. Short of sticking it in the freezer or oven for a spell, we couldn’t do much to test these claims in the mild Kentish climate – but for drone operators heading to the desert or the arctic where smartphones and tablets don’t traditionally fare well, it’s likely to be a vital talent.

In terms of physical connectivity, the top plate of the controller features three ports: an HDMI output, a standard USB port and a slot for microSD cards. The HDMI port can be connected to an external TV or monitor to play back content stored on the controller or the live feed from the drone (in up to 4K resolution), while the USB port and card slot can be used to transfer content to and from other devices. 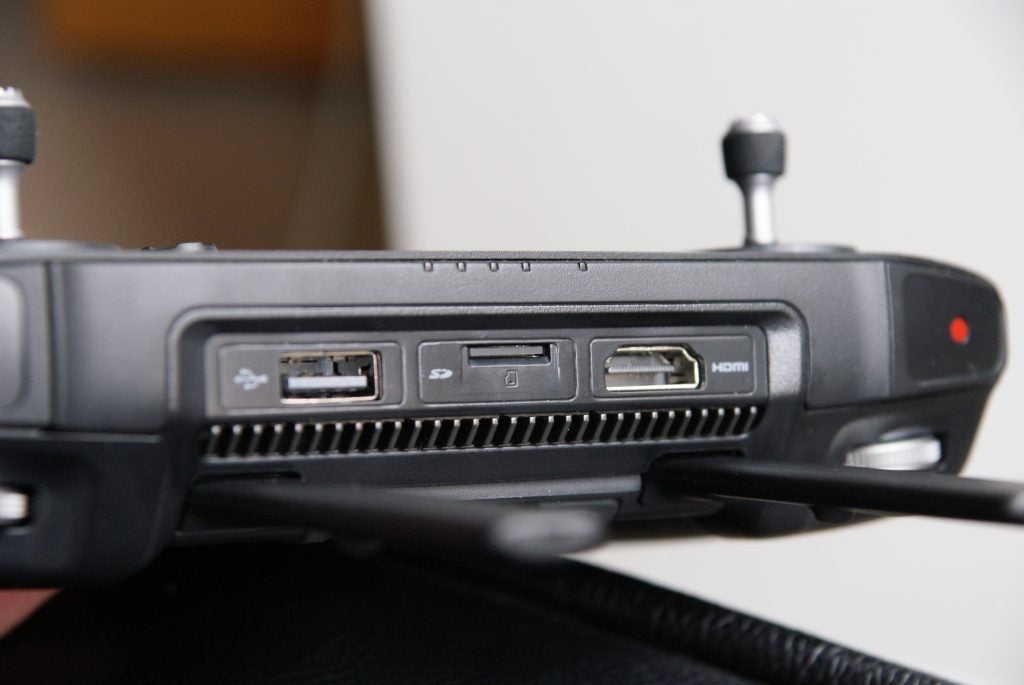 The card slot is particularly handy as it lets you quickly transfer photos and videos from your Mavic 2 for editing and sharing via the Smart Controller.

A USB-C port at the bottom is used for battery charging, and supports quick-charging with the adapter bundled with the Mavic 2 drones. As it stands, the 5,000mAh battery delivers about 2.5 hours of use per charge, which might not sound like a huge amount until you consider than the Mavic 2 battery life is only about 30 minutes per charge – so unless you own five Mavic 2 batteries to bring with you on your drone shooting excursions, you’re unlikely to find the Smart Controller’s stamina an issue.

Also at the bottom are two speaker grilles and two screw holes. The latter can be used to attach accessories such as wrist straps or lanyards, although at the time of writing DJI itself doesn’t offer anything of this nature to buy.

If you’ve already used a Mavic 2 controller, you’ll be pretty familiar with most of the Smart Controller’s buttons.

On the front between the joysticks you have, from left to right, a Pause button (for immediately stopping your Mavic 2 in its tracks if it’s tree-bound), a Return-to-Home button for summoning it back like a naughty schoolchild, a mode switch, and an extra control nib. 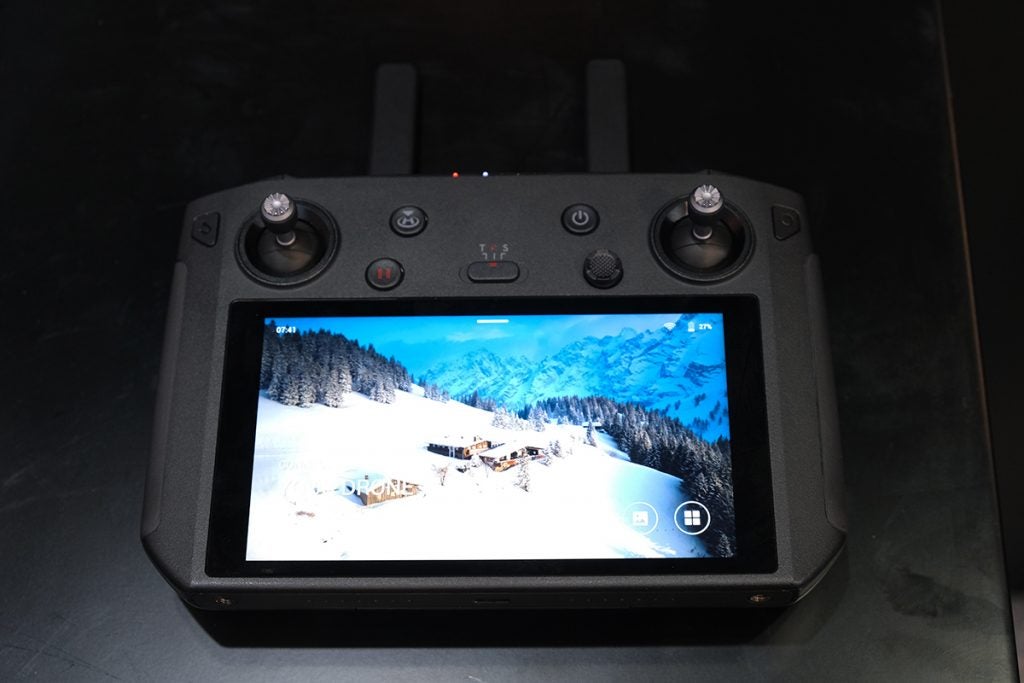 Either side of the joysticks are two handy buttons (select and back), which let you navigate on-screen menus without turning the screen into a smudgy mess of fingerprints. And on the shoulders are shutter buttons for taking stills and video, plus two wheels for tilting and panning your drone’s camera.

Look around the back and you’ll find another nice touch – two customisable buttons, which can be used to quickly change things like EV exposure compensation without needing to dip into the menus.

Fold down the antennas and unscrew the metal thumb sticks (they can be neatly stored under the antennas – a deft design touch) and the whole thing is only 40mm thick, which makes it easy to stow away in a backpack.

Front and centre on the controller is its 5.5-inch touchscreen, which boasts a 1080p resolution and 1000 nits of brightness. To give you some idea of how bright that is, most current smartphones are in the 500- to 700-nit range.

This gives the Smart Controller a significant edge over a phone or tablet when using it outdoors on a sunny day, where glare can make it tricky to clearly see what’s on the screen. 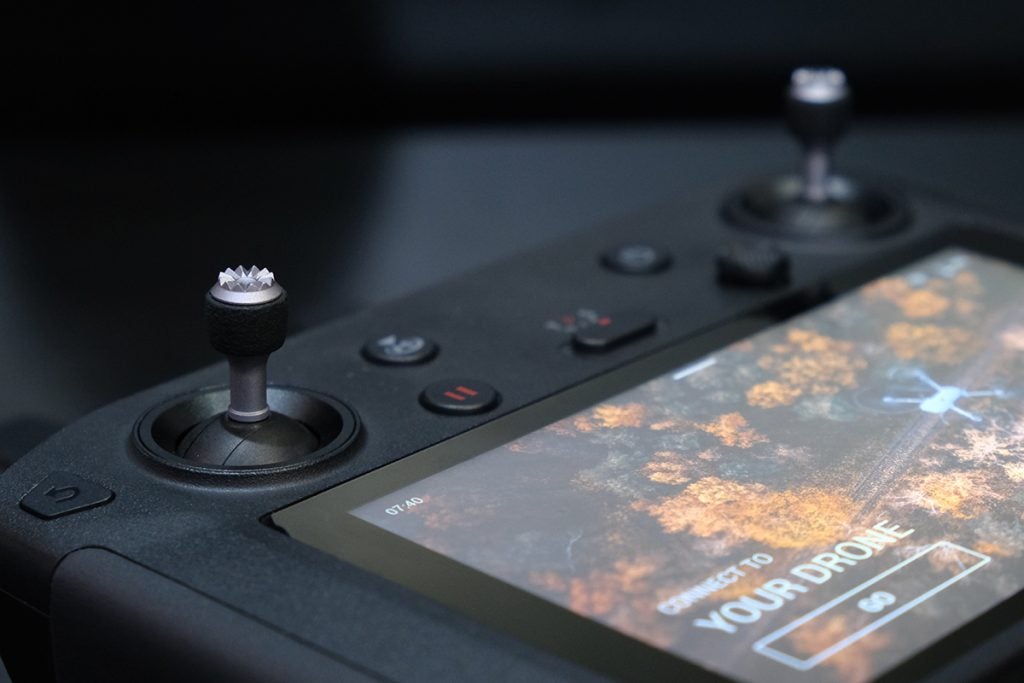 Of course, being February in the UK, it’s been stubbornly overcast and gloomy on all the days we’ve used the Smart Controller. Even under these conditions, though, its clarity and brightness is noticeably superior to our iPhone 8’s display, and makes for an easier time when composing and previewing shots.

It’s worth noting that DJI itself sells a monitor hood add-on for its Mavic controllers that physically keeps direct sunlight off the screen for just £20, and a quick Google search will turn up still cheaper third-party options. So shelling out big money for a brighter screen isn’t your only option if you want to reduce glare.

One thing to note is that the Smart Controller doesn’t claim to improve the flight stats of the Mavic 2 drones at all: in other words, you won’t get any extra range from using this compared to the bundled controller and your phone.

The ergonomics and screen are the two main reasons to buy, but in terms of features there are some things I think are worth noting. Firstly, the controller runs on a re-skinned Android 7.1.2 and can therefore run third-party apps – although installing these isn’t easy thanks to the lack of the Google Play Store app on board. Hopefully this is something DJI will remedy in future, as nobody should feel the need to risk running dodgy .apk files via the built-in Lightning web browser. 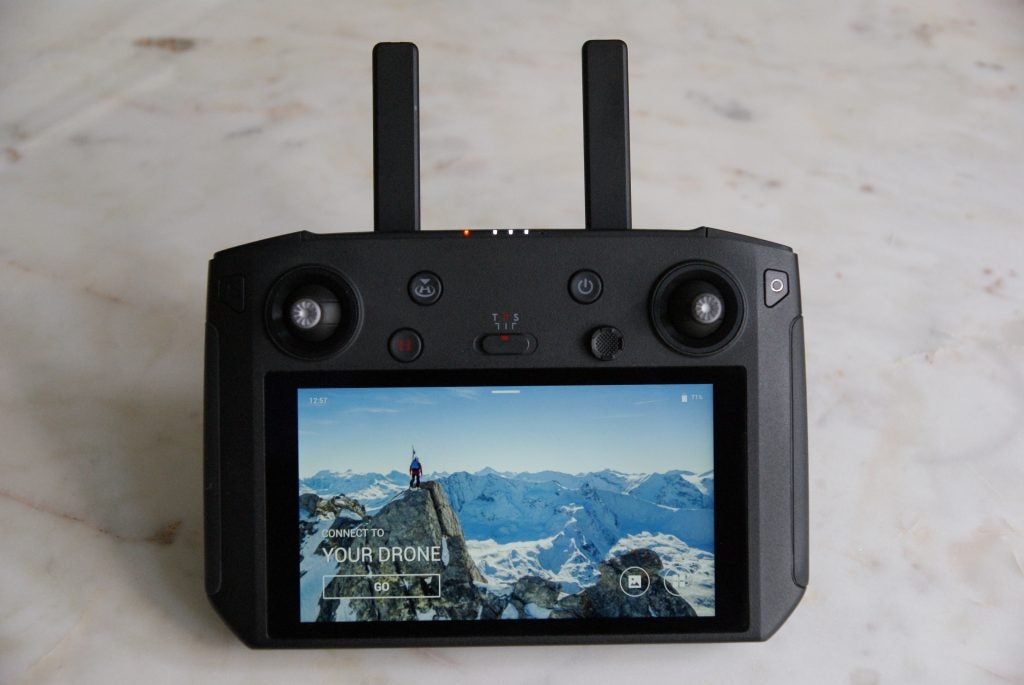 The on-board DJI Go 4 app comes with a new Go Share feature that enables content to be swiftly and wirelessly transferred to a smartphone or tablet, while live-streaming from your drone to social media platforms is also supported – albeit only if you’re tethered to a companion smartphone, as the Smart Controller has no 4G SIM on board.

One disappointment is the lack of backwards compatibility – this is compatible with DJI’s Mavic 2 drones, but nothing older. We understand that going forward the plan is to make it compatible with all DJI’s upcoming drones, even models running future versions of OcuSync, but as it stands those who own Phantom, Mavic Air or first-gen Mavics can’t use this.

Why buy the DJI Smart Controller?

In terms of ergonomics and usability, the Smart Controller is a definite upgrade over the standard smartphone-and-controller combo when flying a Mavic 2 drone. It’s well made, tough, portable and adds a bit of extra functionality via its HDMI output. 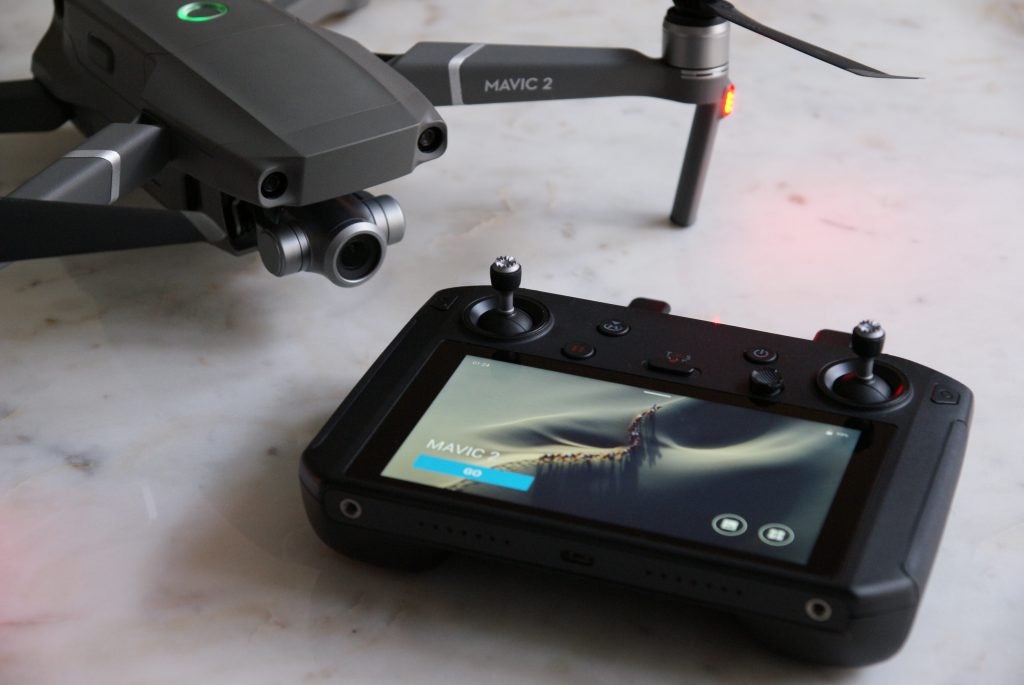 On the other hand, it also costs £579 when bought on its own, or closer to £430 when bought in a bundle alongside a Mavic 2 Zoom or Mavic 2 Pro. That’s a major slice of cash to part with for something that will be, for most people, a luxury – it doesn’t add anything life-changing to the Mavic 2, unless you’re constantly shooting in extreme conditions or really, really need the extra screen brightness.

If you’re a professional, the Smart Controller is probably a sensible purchase, but for most Mavic 2 owners, it’s worth waiting until the price drops.