Portable media players (PMP) have become quite popular recently and even Apple has followed the trend with the latest generation of iPODs. The i-Station i2 is something a little out of the ordinary, not because of its size, screen resolution or storage capacity, but rather because it has a touch sensitive screen much like a PDA.


You might wonder why a touch screen would be of any use on a video player. Well, first off it reduces the amount of buttons needed to control the device, while the i-Station also has a few extra features that you won’t find on most PMPs. Besides playing DivX, XviD, MPEG 1/2/4 at up to 30fps coded with a maximum resolution of 720 x 480 – it is also supports SMI and SRT subtitle formats. Of course the i2 also plays MP3, WMA, AAC and OGG files, so you can use it as a portable music player as well as for video. It also supports AC3 audio streams when playing video with digital audio – the signal is sent out through an external S/PDIF interface, although it’s unlikely that you’ll be carrying a set of surround sound speakers with you. 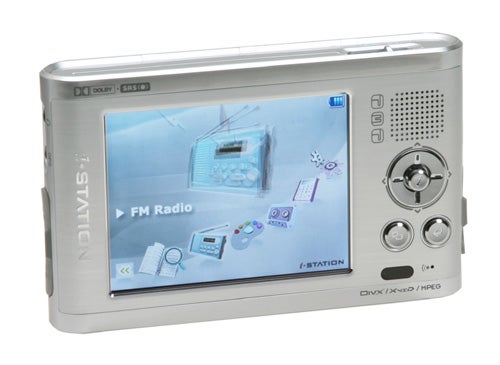 Add an FM radio to the mix and things are starting to look pretty good, although it doesn’t support RDS, which is a shame – the large screen would’ve been ideal for displaying the additional information. However, you can record radio programmes. Some rather unusual features include an English dictionary with recorded pronunciations of the various words, as well as a game mode which allows you to play Xovia .xov games – just don’t ask me were you get hold of more games.


The i2 does of course have a file manager, so you can delete files that you don’t need. However, this doesn’t seem to display unrecognised file formats, which is odd since these are likely to be exactly the files you want to delete. An e-book reader is also present and will read standard text files. For some reason a paint application – think Paint in Windows – has made it to the software line up. I’m not quite sure why this is, as the low resolution screen doesn’t really allow for image editing and the quality of drawings using the stylus are far to jaggy for any sensible kind of use.

The photo album is of more use and can display JPEG, PNG and BMP images, although the low resolution screen is still a limiting factor. The maximum resolution for images is 1,600 x 1,200 pixels, but since the screen’s native resolution is only 320 x 240 this is a moot point. You also get a voice recorder and a scientific calculator thrown in for good measures.


The i2 also supports USB host mode, which means that you can plug in other USB devices to it and transfer the contents across. I succeeded in transferring the contents of my USB memory key without any problems, but trying with a Pentax camera all I got was a transfer error. There is no specific device support list, so this is likely to be a trial and error processor. 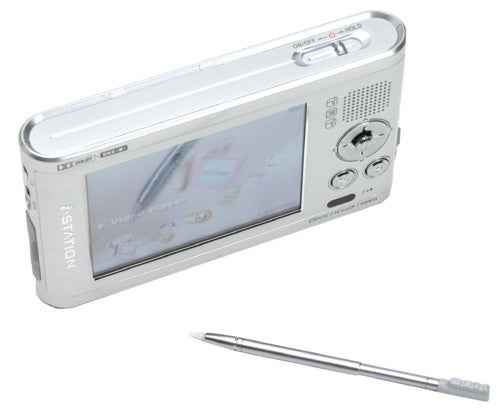 Looking at the hardware there are plenty of good features and some not so good. Starting with the size and weight the i2 measures 123 x 76.8 x 21.5mm (WxHxD) and weighs 246g, making it quite pocketable. The front of the player is home to the 260,000 colour 3.5in 320 x 240 pixel display – the same resolution as many new high-end mobile phones. This is really the biggest flaw of the i2, as it could really do with a widescreen display running a far higher resolution.


To the right of the screen is a mono speaker of average quality. Below this is the main navigation interface if you don’t want to use the touch screen. This consists of a four-way joystick that can be depressed to make selections, a button that moves between the various menu options and an enter key. Below the buttons you’ll find an infrared receiver for the remote control, as well the integrated microphone.

The right hand side is home to the volume control and a rubber flap hides the USB 2.0 port and the power connector. On the left is where you find the headphone socket, and another connector labelled GPS – which doesn’t seem to be in use – and again behind a rubber flap are the TV out connectors. These work by using 3.5mm audio type connectors in one end and the respective TV connectors on the other. There is an S-Video cable and a composite video cable – which rather oddly shares cabling with a coaxial S/PDIF, so you can connect the i2 to a home cinema amplifier if you so wish.


The power switch is located at the top of the player and pushing this right rather than left locks the keys and the touch screen. Oddly enough the top of the player has a sharp edge which isn’t comfortable to hold, but you wouldn’t normally hold this part of it while watching a movie. Finally a stylus is located at the bottom – this is used to navigate through the many menus in the i2. This is made of aluminium and extends to make it easier to use. It can also be plugged into a hole in the back of the i2 creating a makeshift stand for extended viewing. 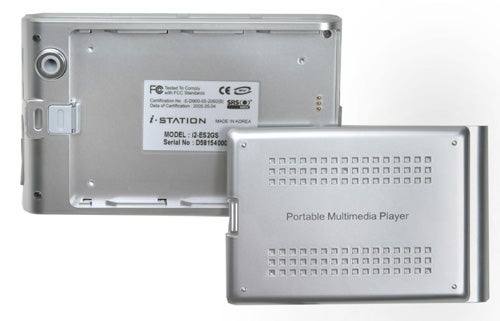 The back is where the battery fits – it’s always good to see a removable battery, allowing you to carry a spare if you’re going to be on a long journey. A high performance battery is available as an option and will set you back £49.00. The i2 is equipped with a Lithium-Polymer battery with a claimed battery life of up to seven hours for video and 13 hours for music with the screen switched off. I can’t confirm this definitively, but in use the battery life was down to two bars after about two hours of video and a lot of mucking about with the various applications.

Transferring files to the i2 was quite a positive experience and an average 700MB AVI file was copied across in about two to three minutes. The manual quotes a transfer speed of 18MB/sec, much slower than the theoretical maximum of 60MB/sec of USB 2.0. This limitation is like to be partly due to the USB to IDE interface on the player and partly down to the fairly slow hard drive. However, this is not really an issue as the i2 isn’t any slower than other PMP devices when it comes to transferring files. File transfer is done by simply dragging and dropping whatever you want into a folder on the i2. 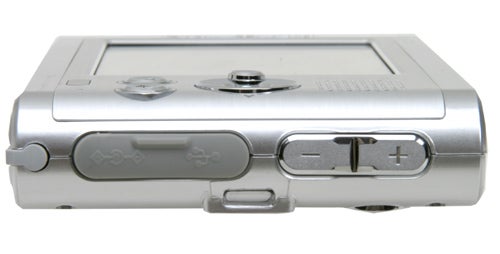 I transferred various video content to the i2 to see how well it coped with differently encoded video. All but one of the video files played back flawlessly, the one that didn’t play does seem to be a particularly difficult file, and I haven’t managed to get it to play on any portable device – so the i2 can’t be criticised for that. The screen is generally good enough for watching video, but as everything I played on the i2 seemed to be interlaced it’s not up there with say a portable DVD player or the Sony PSP in terms of quality. Connecting the i2 to a TV worked well and after having set the correct TV system the picture quality was pretty good, considering the limitations of the outputs. 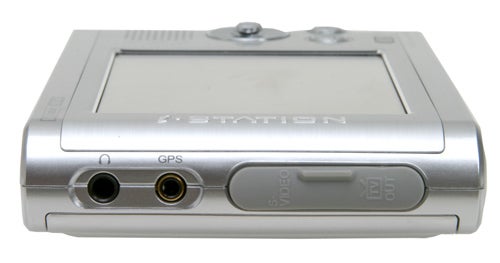 Upgrading the firmware was something of a pain, as the software is in Korean and for some reason it didn’t want to know when I tried to upgrade to the latest version. Luckily you can just replace the files on the i2 and then copy the firmware file across on its own which auto updates the player the next time you switch it on. At least there seems to be plenty of firmware updates on the manufacturer’s website, which in a way is a good sign that the device is being supported.

You get quite a lot of accessories in the box. A set of stereo headphones from a company called Cresyn – which I’ve never heard of before – that actually sounds a lot better than I had expected. Size wise they compare to those that Samsung supplies with the D500 and the design is also quite similar. Four foam covers come with the headphones as well. For those with small ears these headphones might be on the large side, although they fitted me perfectly. 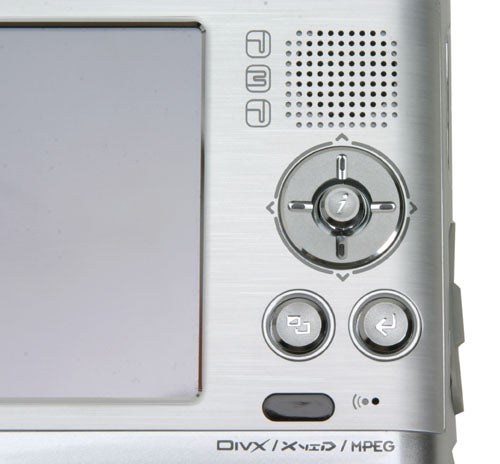 As I mentioned earlier there is an S-Video cable and a composite video cable with coaxial S/PDIF out. You also get a 3.5mm to phono cable for connecting the i2 to your TV or stereo. A USB 2.0 to mini USB cable is of course supplied but you also get a converter from a standard USB connector to a mini USB connector that is used for the USB host mode. A charger is supplied, while a nylon carry case that can be attached to your belt is also thrown in. The carry case has space for a cable or two as well as a spare battery. Finally we have a carry strap and a polishing cloth. 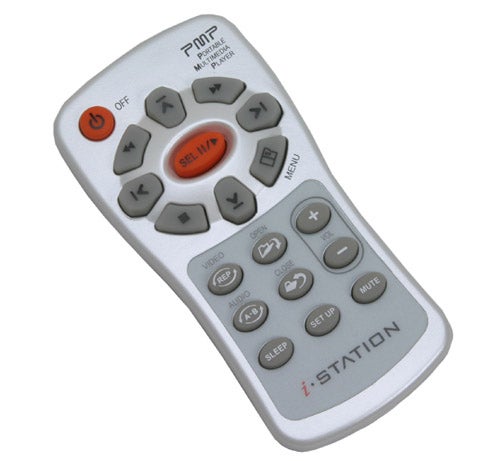 The i2 is by no means perfect and the biggest flaw is really the low resolution screen, as a widescreen display with higher resolution would have made this a great product, especially considering all the functionality you get. At £249.00 including VAT the i2 isn’t terribly expensive compared to competitive products, but considering that you can get a Sony PSP for £179.00, the shine soon starts to fade. Fair enough, the PSP doesn’t have a 20GB hard drive, but the screen is much better and you can actually buy films on UMD disc, so there is no need for converting your DVDs or downloading what is seen as illegal content. That said, you can rip DVDs to a MemoryStick in a PSP if you wish.


Overall the i-Station i2 is an interesting product that could do with a few tweaks, but I would watch the development of the next generation unit closely. Hopefully the successor to the i2 will have a high resolution widescreen display, making it a better mobile movie machine.


The i-Station i2 is a feature rich PMP for a reasonable price with a touch screen interface and plenty of features. However, the low resolution screen is what really holds it back.