If you want a home cinema sound system to pair with your flatpanel TV but can’t accommodate five speakers and all the other bits and pieces, then a soundbar could provide the perfect solution. These increasingly popular products pack all the necessary audio decoders, amplifiers and speaker drivers into a single unit, which is designed to be wall-mounted below your TV or to sit on your AV cabinet.

Denon DHT-FS5 X-Space soundbar not for you? Check out our round up of the best soundbars to buy


Although they’re no match for a full 5.1 system (and to be honest, they don’t pretend to be) the aesthetic benefits and convenience usually make it worth the sacrifice – but the sound dispersal technology found inside most models does at least attempt to deliver something more expansive than bog-standard stereo, even if the results aren’t always convincing. 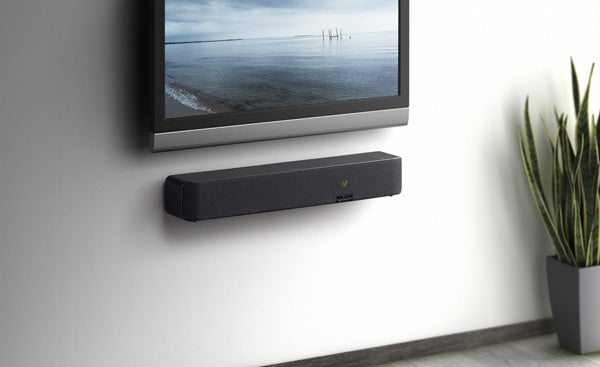 The DHT-FS5 is designed to accompany TVs between 24in and 37in, but if your TV’s between 32in and 50in you’d be better off with the bigger DHT-FS3. The FS5 is robustly built and its 750mm width/118mm height make it reasonably compact, but its 138mm depth means makes it stick out quite far when wall-mounted. The unit’s plain looks are nothing to write home about, but that’s probably a good thing – after all, you don’t want anything to divert attention from your flash flatpanel TV, do you?


The front panel is covered in black speaker cloth, behind which sits a small two-digit LED display that glows through the material to indicate which modes are selected. At the bottom is another panel that indicates which audio codec is being received and a power light. The top and sides are also finished in black, but the unit is available in silver if black doesn’t float your boat.

On the back is a small selection of sockets, including analogue stereo input and three digital audio inputs – two optical and one coaxial – which pleasingly enables you to feed signals from a Sky box or Freeview receiver as well as your DVD player. The selection is completed by a subwoofer pre-out should you want to expand the system further, although the unit’s integrated virtual subwoofer with three bass reflex tubes means you might not need to. You can also connect the optional ASD-3W wireless control dock to the FS5 and enjoy Wi-Fi streaming, iPod playback and Internet radio access.

It’s worth noting that unlike Philips’ HTS series soundbars there’s no built-in DVD player, which doesn’t make it completely self-contained and leaves you with the problem of hiding the audio cables when wall-mounting. When doing so, there are screw holes on the rear and brackets provided in the box, plus you’ll find a set of screw-in feet that can be used when placing the unit on a TV stand.


The unit boasts built-in Dolby Digital and DTS decoders as well as Dolby Pro Logic II for spicing up stereo signals. The lack of Dolby True HD or DTS HD decoding could be seen as a missed opportunity given the growing number of Blu-ray players in our homes, but it would have required an HDMI input and pushed the price up even further – we’re sure Denon is working on something for the future. 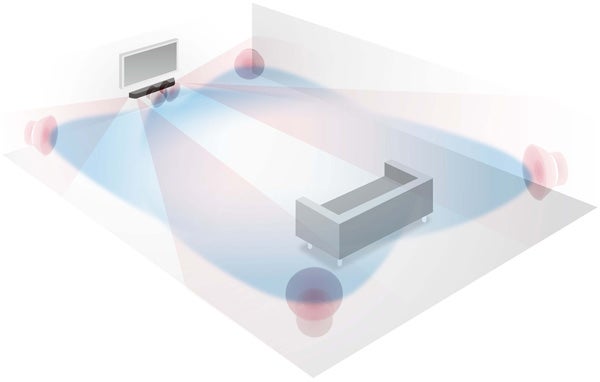 The highlight on the feature list is Denon’s X-Space, which uses diffraction and sound beams to spread out the surround effects and create a greater sense of space. Because it doesn’t rely on reflections off the walls, the technology generates a wide sweet spot and allows you to install the unit in any location. To achieve this feat, the cabinet contains six precision speaker drivers, advanced digital signal processors and five digital amplifiers delivering 150W or power (4 x 25W and 1 x 50W). 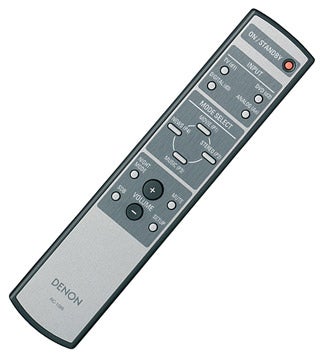 The FS5 is extremely simple to use. Everything is controlled using the supplied remote, which has a lovely brushed aluminium finish and a strangely retro feel to it. There’s a sparse selection of buttons providing quick and easy access to inputs and sound modes – for the latter you can select from Movie (which expands the soundstage), Music (best suited to live music sources), News (which boosts dialogue) and Stereo (best suited to two channel music playback). You’ll also find a button that activates the SDB bass-boosting circuit and a Night Mode to boost the audibility of sounds at low volumes.


There are no complex calibration procedures to endure – you simply toggle through three different modes using the Setup button on the remote, with each one catering for different room sizes and listening positions. This approach means you can’t tailor the sound exactly to your room requirements but it does make setup blissfully simple.

As for sound quality, a run through of ”Pearl Harbor” piped digitally from a Pioneer DVD deck reveals that the FS5 is a powerful and assured performer, plus it confounds our expectations by delivering a very convincing approximation of 5.1-channel sound – and it’s not often we say that about a soundbar. 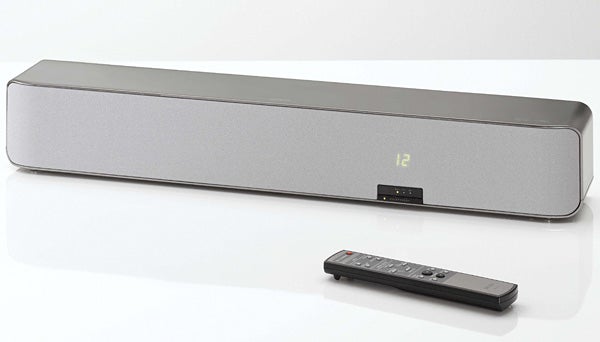 It’s also hard to believe that such a compact unit could generate so much bass, but the attack on Pearl Harbor is all the proof we need. The swooping plane effects and huge explosions are delivered with such gut-wrenching force that we had to turn it down several times to prevent the neighbours from calling the police – and that’s without a subwoofer connected. What’s more, activating SDB makes a big difference to the depth of the low frequency effects, making it a useful addition to the feature list.


But it’s also proficient higher up the frequency range, with the FS5’s forthright midrange and treble propelling this breathtaking scene along at a rate of knots. Gunshots and ricocheting bullets are conveyed with eardrum-shattering sharpness and attack; shouts, screams and intermittent dialogue cut through the cacophony with ease and the propulsive presentation of the score injects plenty of drama and energy. 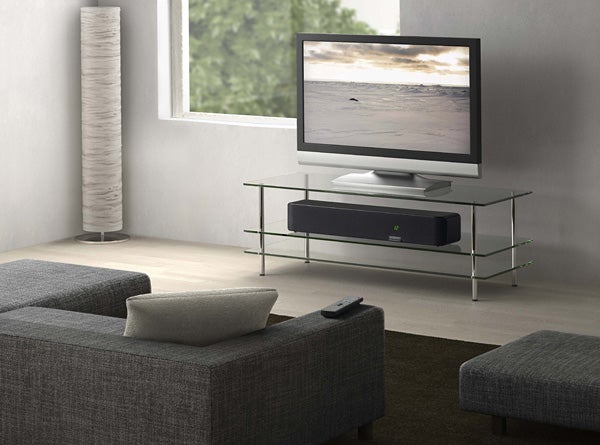 But even more impressive is the expansive soundstage, with X-Space beaming surround effects deep into the room and making certain passages of ”Pearl Harbor” completely envelop the listening position. The best illustration is the scene in which Cuba Gooding Jr. is boxing on the ship’s deck – the noise of the baying crowd sounds like it’s coming from all around the room – but it’ll also have you ducking for cover during the Pearl Harbor attack. You do have to move about a bit to find the sweet spot, but once there the effect is rewarding.


There’s also a warmth and attention to detail in its music playback that you simply wouldn’t get through TV speakers, and the Music DSP mode earns its stripes by making music sound more open and colourful then straight stereo.


The Denon DHT-FS5 is the rarest of creatures – a ‘front surround’ system that actually delivers something approaching true 5.1 channel sound. In fact it packs a real punch in all areas of its audio performance, making it one of the best soundbars we’ve encountered. It’s also incredibly easy to use and although it lacks a bit of cosmetic pizzazz, the neat and unimposing design should make it a welcome addition to your living room. Our only qualm is the price, as you can pick up a full 5.1 system for less, but its high quality performance certainly won’t leave you feeling short-changed.