Denon announced its 2013 AV receiver line-up in April, and the baby of the bunch is the Denon AVR-X500. It roughly takes over from the Denon AVR-1513, which was one of last year’s most popular entry-level home cinema receivers.

Costing just under £250, the Denon AVR-X500 is an affordable way to get into the world of surround sound. And, unlike most previous budget receivers it supports 3D pass through – making it a pretty attractive upgrade if you’ve just bought a new TV.

HD audio codecs Dolby TrueHD and DTS-HD are supported too, rounding-off abilities that might be considered ‘baseline’ for a receiver in 2013.

In other respects, though, the  Denon AVR-X500 is conspicuously basic. This is a 5-channel receiver, where models higher up the food chain offer processing for up to 9.2 speaker setups – that’s nine ‘satellites’ and two subwoofers.

Connectivity is also limited compared with the more expensive models. There are four HDMI sockets, three on the rear and one on the front. If you have a large home entertainment rig heating up your lounge, this may not quite be enough. 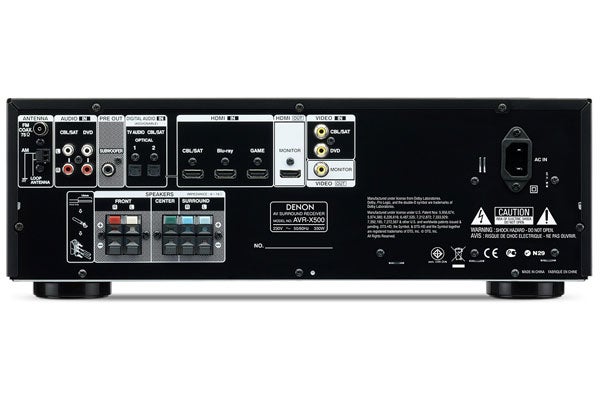 Other connections include a front 3.5mm jack input for use with a portable media player, and a bunch of non-HDMI inputs on the rear. These include two phono audio ins, two optical audio inputs, and a pair of S-video inputs. The Denon AVR-X500 keeps it simple.

The other substantial hole in the Denon AVR-X500 feature list is wireless connectivity. There’s no inbuilt Wi-Fi and no USB port into which you might plug a Wi-Fi dongle – as used by many other AV receivers.

This rules-out being able to use DLNA streaming, access Spotify or internet radio stations. The lack of a USB port also means you can’t plug in a memory stick of music or movies.

The picture should be clear by now – the Denon AVR-X500 is for people who want an affordable home cinema amp that doesn’t try to be anything more than that. And with 140W per channel, it’s more than capable of driving the scores of entry-level and mid-range speaker packages out there.