The AVR-4310 sits two rungs up the ladder from the AVR-2310, which wowed us back in August with its plentiful features and killer performance. Since then, the Onkyo TX-NR807 has raised the bar even higher, which means this high-end Denon has got its work cut out justifying a price tag that’s almost twice as much as the Onkyo.


But taking a look at the feature list, we don’t think anyone could fail to be impressed. One of the highlights is Audyssey’s Dynamic Surround Expansion (DSX), which we first encountered on the Onkyo TX-NR807 but the AVR-4310 was actually the world’s first AV amp to offer it.

The idea behind DSX is to create a fuller, more immersive front soundstage. Place an extra pair of ‘front wide’ speakers next to the regular front pair and this technology will fill them with two new channels from 5.1- and 7.1-channel sources. And like Dolby Pro Logic IIz, which is also on offer here, it’ll even create front height channels, or you can use the extra channels in the more familiar surround back configuration.


As well as boasting a bevy of headline-grabbing features, the Denon is no slouch when it comes to the basics. It can output 170W from all seven channels, decodes every audio format going (including, crucially, Dolby True HD and DTS HD Master Audio) and comes equipped with a phenomenal array of connections that should keep you futureproofed for years to come.


Check the picture below for the full overview, but highlights include six HDMI v1.3a inputs (one on the front), two HDMI outputs (which run simultaneously), two optical digital audio inputs, and more S-video, composite, component and analogue stereo inputs than you’ll feasibly ever need.

Another stand-out socket is an Ethernet port, which brings us to one of the Denon’s most appealing features – network streaming. Hook it up to your router and you can stream audio and photos from PCs on your home network, as well as listen to internet radio stations and stream music from Napster’s online subscription service. Yes the cheaper Onkyo TX-NR807 offers similar network functionality, but that doesn’t make its presence here any less welcome.


You also get two USB ports (one front, one rear) that let you hook up memory devices and play music and photo files (WMA, MP3, WAV, AAC, FLAC, JPEG) and either port can also be used to connect an iPod.

Among the other goodies is fourth-generation Denon Link technology, which reduces audio jitter when both the HDMI and Denon Link socket are connected to a Denon Blu-ray deck, much like Pioneer’s PQLS technology. But the new Denon Clock Jitter Reducer also sharpens up the digital sound quality through any of the digital inputs.


There’s also a plethora of Denon’s own audio tech to consider, including the DDSC-HD Circuit, AL24 Plus and Audio Restorer, plus loads of DSP modes and 1080p upscaling courtesy of Anchor Bay’s video processor (which brings with it a range of noise reduction and picture enhancements).


Like most Denon receivers, the AVR-4310 is a dapper piece of kit, boasting a classy design that doesn’t so much jump out at you as sidle up discreetly and say hello. Despite not being particularly jazzy or radical, its understated looks are still a delight, as is its meticulous build quality. The bodywork is also a lot more compact than you may expect from such a well-equipped and powerful piece of kit, testament to the clever internal design (which has also seen Denon’s AV elves give the output stages a complete makeover).

The unit’s front panel is nice and tidy, thanks to a flap that hides most of the buttons and auxiliary inputs, which include HDMI, USB, S-video, analogue stereo and another optical digital input. The display panel is wide and easy to read, although the little logos surrounding the main text can only be deciphered up close.


But if you’ve connected the 4310 to your TV via HDMI then you’re presented with by far the best user interface of any AV receiver. Displayed in full colour and peppered with attractive icons, this GUI puts most Blu-ray players to shame. It’s slick, responsive and simply structured, which makes the 4310’s deluge of setup options and sound modes a lot more manageable than you expect, which is great if you’re a newcomer to this home cinema lark.


Rendering setup even more of a doddle is Audyssey’s MultEQ XT, which automatically checks the acoustic properties of your room (using a setup mic that plugs into the front panel) and tweaks the audio parameters to find the best balance. As part of this process, the Denon launches a subwoofer level matching mode that lets you find the recommended bass level (75dB), which is an unusual but welcome addition.


Afterwards, Audyssey’s Dynamic EQ and Dynamic Volume ensure audible sound levels no matter what you’re listening to or how quietly you’re listening to it. But experienced users who would rather tweak the levels manually can bypass all this and use the detailed adjustments in the setup menu.

In the box are two remotes. The main one is a universal learning zapper, with an electroluminescent touchscreen display panel that sports icons for the different devices that can be controlled – the controls below change according to which device is selected. Below this panel is a neatly arranged bank of hard buttons governing functions like volume and menu navigation. Thankfully this remote doesn’t take long to master and proves to be a very effective way of controlling your entire AV system.


The other remote is a much simpler animal, designed for use in Zones 2 or 3 in a multi-room setup. It looks cluttered but intuitive button placement and good labelling makes it agreeable enough. 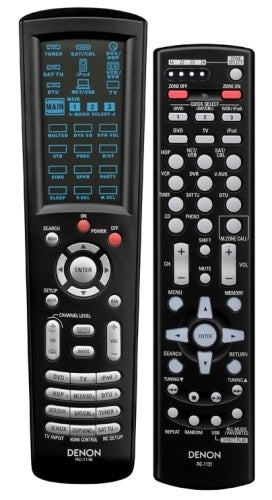 With a Denon DBP-2010 linked to the HDMI input and Teufel’s Theater 3s on speaker duties, we got stuck into some of our favourite Blu-ray discs and immediately fell in love with the sparklingly detailed, rich and muscular sound that filled the test room.


Monsters Vs Aliens, for instance, is an absolute joy, with the Denon ripping through the repertoire of zippy, frenetic effects, comic dialogue and blockbuster action with relish. When called for, the 4310 displays admirable subtlety and dexterity, teasing out delicate background detail – the chirping crickets and heavy breathing during the opening titles are beautifully realised – yet it can flip to full-on bull-in-a-china-shop mode in the blink of an eye.


As the monsters battle on the Golden Gate bridge, the force with which it relays the robot’s huge stomping footsteps and the sound of crunching metal is frightening, but the sound never loses focus or control – this is as consummate and masterful a performance as you’re likely to hear at this price point. Turning up the volume doesn’t phase the Denon either, as it laps up the loudness like a cat in a cream factory.

Powerful though it is, the sound is imbued with the smoothness and refinement that characterises Denon amps. Those looking for a bit more edge and rampant aggression from their home cinema system should have a listen to the Onkyo TX-NR807, perhaps even a Yamaha or Pioneer.


To anyone thinking that Audyssey DSX and Dolby Pro Logic IIz are just gimmicks that add nothing to the home cinema experience, we urge you to give them a try – you’ll never look at (or listen to) home cinema sound in the same way again.

Both modes are at their best with hi-res Blu-ray movie tracks, and although clichéd, Pro Logic IIz and DSX Height create an immense wall of sound that increases the sense of scale and plunges you deeper into the scene. It feels like the towering monsters and struts of the Golden Gate bridge are looming right over you.


DSX’s Width mode has similarly striking effects, bulking out the front soundstage to give movie tracks extra dynamism and expansiveness. The sound is more solid and full-bodied, but at no stage do you lose the crucial sense of separation and placement.


Rounding off this exceptional performance is superbly articulated dialogue and colossal bass output, and music lovers will be delighted with how the Denon handles their beloved tunes. It’s nimble and rhythmic, detailed and warm – a truly intoxicating sound.


The AVR-4310 is unquestionably a great AV receiver, tastefully designed, bursting with features and able to spin movie soundtracks into sonic gold. The brilliance of both Audyssey DSX and Pro Logic IIz takes its performance to the next plateau and musically it’s out of this world.


But the problem is there isn’t a great deal here that you won’t find on the much cheaper Onkyo TX-NR807, which is half the price and throws THX Select 2 certification into the bargain. Which you prefer depends on taste. The Denon’s sound is more finessed, with greater detail and texture, whereas its Japanese rival is pure muscle. At the end of the day it’s horses for courses, but one thing’s for sure – the AVR-4310 will make a formidable centrepiece for any home cinema system.