We Brits are a peculiar bunch. Obsessed by the weather, guzzling down fish and chips like there’s no tomorrow and fanatical about a game where 22 men lump a ball around a big patch of grass – idiosyncrasies that sound strange to outsiders but make us the great nation we are.


Just like our tastes in home cinema in fact. We have very specific ideas about how we like our movies to sound, and that’s something Denon has recognised with its latest range of AV receivers, two of which have been tuned specifically for UK ears.

The AVR-2310 is the most advanced of three new sub-£1,000 models launched by Denon this year, alongside the entry-level, 550W AVR-1610 (£349) and the step-up 840W AVR-1910 (£479). Both the AVR-2310 and the AVR-1910 are ‘UK Tuned’, which means that Denon’s Japanese engineers have conducted extensive listening sessions with Denon UK’s audio gurus and tweaked the sound until everyone in the room is happy. It’s hard to say exactly what the ‘UK sound’ is, but it lies somewhere between the upfront brashness favoured by Germans and the softer, detailed sound that delights Japanese eardrums.


What UK buyers also love is a lengthy list of cutting-edge features to play with, and the AVR-2310 goes far and beyond the call of duty, offering a range of goodies that’ll make any self-respecting home cinema fan feel like a kid in a sweet shop on pocket money day. 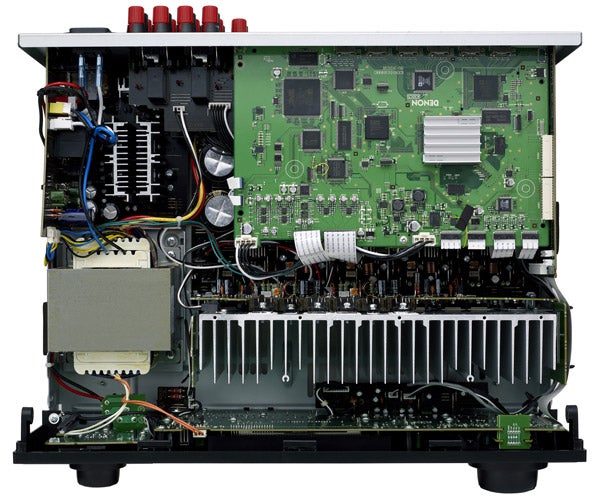 More on those later, but first let’s talk aesthetics. Denon sent us the Black version but it’s also available in Premium Silver if that floats your boat, and in both cases the company has crafted an undeniably attractive unit that doesn’t rely on lights ‘n’ logos to underline its cutting-edge credentials – this earns aesthetic brownie points with a classy, understated look that Denon always does so well.


The vibration-resistant casing – bolstered by a rigid bottom chassis set on cast-iron feet – is reassuringly sturdy and the unit is surprisingly compact, slotting into the space normally occupied by my beloved AVR-3802 with loads of room around the edges.


Every aspect of the front panel is tasteful and user-friendly, the standout feature being a huge display window that presents the key info in large letters. A row of buttons is almost invisibly integrated along the bottom edge of the display panel, while all the other keys (governing menu control, surround modes and more) are tidily arranged along the bottom. You’ll also find satisfyingly big dials for volume and source selection, plus S-video, composite, stereo audio and optical digital audio inputs.

On the back is a mind-blowing array of sockets that should keep you going for years to come. The highlight of course is the inclusion of five HDMI v1.3 inputs for hi-def gear, plus an output to pass the signals to your display. Like many of its rivals, the AVR-2310 features built-in upscaling circuitry that allows you to feed in an SD signal and get 720p, 1080i or 1080p out the other end.


Your audio sources are in good hands too, with two optical and two coaxial digital inputs (and one optical output), six sets of analogue inputs (and two outputs), 7.1-channel external inputs and analogue pre-outs. Add to that a shedload of other video inputs/outputs, an optional iPod dock connection and custom install ports and this receiver is just about ready for anything.


The Denon’s surround back speaker terminals can be used for their nominated purpose, or you can reassign them in the setup menu for Front Height channels, speakers in a second zone or to bi-amp a front pair.


As mentioned, the AVR-2310 offers the sort of extensive feature list that you’d hope for at this price. It blasts out 135W from all seven channels and decodes the entire gamut of Dolby and DTS formats on Blu-ray and DVD, including hi-res Dolby TrueHD and DTS HD Master Audio tracks.

Denon has also joined Onkyo in offering Dolby Pro Logic IIz processing, which cleverly lets you add an element of height to the 5.1 soundstage – if you’re prepared to install a pair of speakers above your TV that is. It extracts non-directional audio information contained in any soundtrack and sends it to two ‘front height’ channels, giving the impression that certain effects and ambience are emerging above you. It’s an interesting idea and the results can be impressive, but we’re not 100 per cent convinced many home cinema fans will invest the time and effort for such marginal benefits. Much more useful is Pro Logic IIz’s ability to boost stereo sources up to 5.1 and 7.1 channels.


You’ll find a wealth of other audio features, including seven Denon surround modes and the Restorer feature, which aims to improve compressed audio playback by replacing the data lost during compression. It’s also equipped with Audyssey’s MultEQ, which attempts to maintain the optimum sound quality at all times. Dynamic EQ and Dynamic Volume lend able support, respectively enhancing low-level dynamics and smoothing over sudden changes in volume.


Some hands-on time with the AVR-2310’s operating system reveals it to be slick and easy to use, thanks mainly to the onscreen menus displayed via the HDMI output. The vast functionality on board makes this GUI a real godsend, and despite its unflashy appearance the clear, intelligent layout makes it a joy to navigate. You can tweak settings on the front display panel, but it feels laborious by comparison.

The exhaustive range of audio adjustments could take days to get your head round, but thankfully Audyssey’s MultEQ auto setup removes the hassle. It takes all the necessary room readings for you (using the supplied mic) in up to six listening positions and then sets the appropriate levels. The results are fine, though a little manual tweaking was required afterwards to bring the sound up to scratch, particularly the bass level.


Denon has struck gold with the remote, which cleverly puts all the frequently-used controls on one side, then buries the lesser-used keys under a flap on the back. It’s big, but the intuitive layout and clear labelling keep confusion at bay.


Not only is it easy to use, but the AVR-2310 is also a masterful performer. We sat through ”Transformers” on Blu-ray for what must have been the hundredth time, but such is the Denon’s level of insight and energy that it felt like a fresh, new experience.

The Denon sets out its stall right from the movie’s opening credits, lending warmth and presence to Optimus Prime’s treacly voiceover. Cut to Blackout’s attack on the Army base and the soundstage explodes into life, with the Denon orchestrating the carnage beautifully – rapid, biting machine gun fire rattles from the fronts and surrounds, the robot clatters around without a hint of hardness to the high frequencies, while surround steering is smooth, fast and precise. It’s an invigorating listen that had me on the edge of my seat despite knowing exactly what was going to happen next.


Bass output is absolutely monstrous when needed, but remains tight and punchy. Pounding footsteps and explosions carry enough heft to shake the floor but sound nimble and sprightly, propelling the action along without bludgeoning you into submission.


Detail levels are exceptional, not only during the big action scenes but also during the movie’s (few) quiet moments – background ambience and effects, like gentle robotic bleeps and the score’s subtle percussion, are teased out and presented with sparkling clarity. Human dialogue is also smooth and well-rounded.


Switching to music material, the AVR-2310 demonstrates the same level of expertise. Its presentation of ”What The World Needs Now Is Love” by Japanese jazz group Atagiin is so open and natural that the band could be in the room with you. Crisp percussion dances alongside the deep and agile double bass with perfect timing. And it goes for the jugular with Nirvana’s ”Nevermind” on CD, giving a fiery performance and conveying Kurt Cobain’s voice in all its cracked, raspy beauty.


As you can probably tell, we absolutely love this receiver. And with good reason – it’s packed with features, easy to use and delivers a sensational performance with movies and music, all of which makes that seemingly high price tag suddenly look pretty reasonable. And the scary thing is, the AVR-2310 isn’t even the best Denon has to offer this year – its new mid-range and high-end models are just around the corner, the quality of which will be beyond belief if this is anything to go by.