Design
The Denon AVR-2113 is, as most receivers generally are, an iterative update of last year’s AVR-2112. Aside from the newly-acquired home cinema features that pop up every year, the 13 series boasts a tweaked design.

Depth of the units has been reduced by about 50mm and the fascia has been cleared-up a bit. Some of the front buttons and connectors have been hidden by a plastic cut-out, and other front buttons have been made less conspicuous. It remains a minor aesthetic tweak though – these are still hulking great black boxes, lacking the pizzazz of the Marantz models and some of the control knob smoothness of Onkyo’s AVRs. 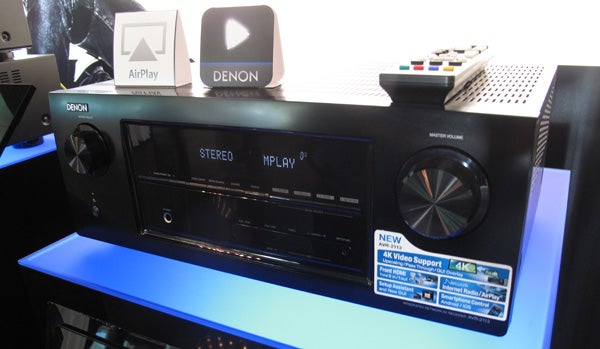 Connectivity
The Denon AVR-2113 offers six HDMI inputs in total. There are five on its rear, and an additional quick-access port on the front – which can be hidden behind the plastic flap when not needed. Although this will probably be enough for most, an extra HDMI is one of the benefits of the top-end model – the AVR-3313 has six HDMIs on its rear. 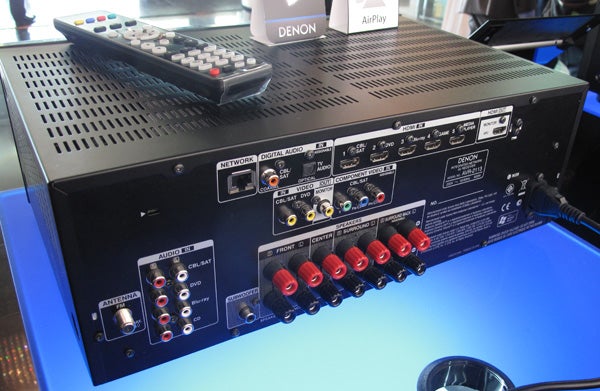 The HDMI ports are, naturally, 3D capable. Older-style connections are catered-for too – component, composite and optical ports are included, as well as a quartet of audio-only stereo phono inputs.

Its front panel’s quick connectors – aside from the HDMI – are comprised of composite AV inputs and a USB port, to plug in an iPod or drive. Denon says it’ll even charge an iPad if needed.

What do you miss out on? The key thing to consider for those with real high-end setups is that there’s just a single HDMI output. Top models in the series offer multiple simultaneous outputs. For most people, these are pretty useless, but may become indispensable if you use a multi-room setup. There’s also just a single subwoofer output.

Features
The Denon AVR-2113 is a 7.1 receiver, bolting on an extra pair of surround rear channels to the standard 5.1 array for better soundstage imaging. Real high-end models add two sets of front speakers in a similar vein, but only those with gigantic rooms and a thing about speaker cable – or digging into walls to hide it – need apply. Its amp brings 125W per channel, which is enough to drive almost all floorstanders with ease.

A key feature that the AVR-2113 brings over the model below in the range, the £399 AVR-1713, is 4k upscaling and 4k HDMI switching. This is future-proofing that could be argued is a little over-the-top at this mid-range level. 4k projectors and displays are ridiculously expensive at present, and will be out of the price range of most buyers for at least a few years.

Its network connectivity features are much more useful, in our opinion. The AVR-2113 supports AirPlay, internet radio and DLNA, making streaming music fairly easy. Remote control apps for iOS and Android will be available too. A deal with Spotify hasn’t yet been finalised, but it’s in the works. There’s an Ethernet port on the rear to get connected.

To make setting the receiver up easy, Audyssey MultiEQ-XT is supported. This uses a microphone – which plugs into the front panel – to setup levels for each channel. It’s particularly useful for getting speakers that aren’t perfectly match to play nicely with each other.

Remote
A remote isn’t generally what people are willing to pay top buck for in a receiver, but using a good one is important. Denon has significantly simplified its AVR remote this year, making it much simpler to use – and look at. The “cram in as many buttons as you can” strategy has been replaced by a more minimal approach, which takes ergonomics into account a good deal more. 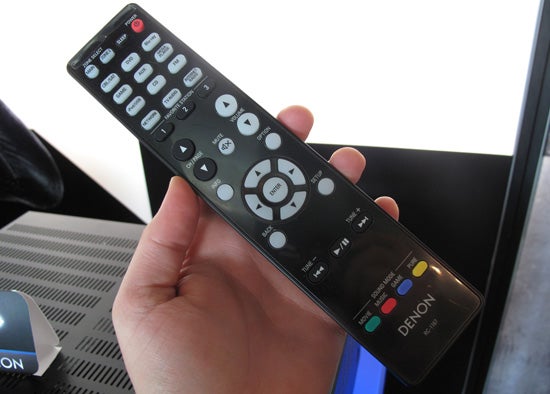 The Denon AVR-2113 is arguably the last model in the AV-13 line-up that the average buyer can stump up for without paying for features they probably won’t use. If you’re unlikely to upgrade to a 7-channel setup, the AVR-1713 is worth considering, though.