Denon is a headphone veteran, but over the past few years we’ve questioned the products it’s launched. While chasing the Beats bandwagon meant that too often form, fit and even sound quality were off the mark.

However, with the AH-MM400, it feels as though Denon has returned home. These are the first premium, full-sized portable headphones that fit the company’s style and hit every target with ease.

If you’re after a set of headphones for everyday wear – be that for you journey to and from work, and even while you’re there – these are among the best available right now. Or, if you’re looking for something similar to the Sennheiser Momentum 2.0, but with less emphasis on bass and a slightly more natural tone, then here too the Denon AH-MM400s will be ideal. 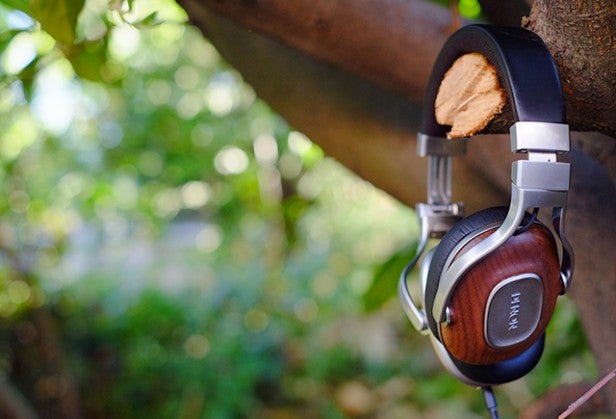 We’ve already accused Denon of imitating Beats – just look at the Denon AH-D600 for proof. The Denon AH-MM400, however, have none of that flavour.

With their wood-topped ear cups, they’re out to court a more mature audience. And by this we don’t mean “old” – just those who might cringe at the idea of headphones as urban streetwear. 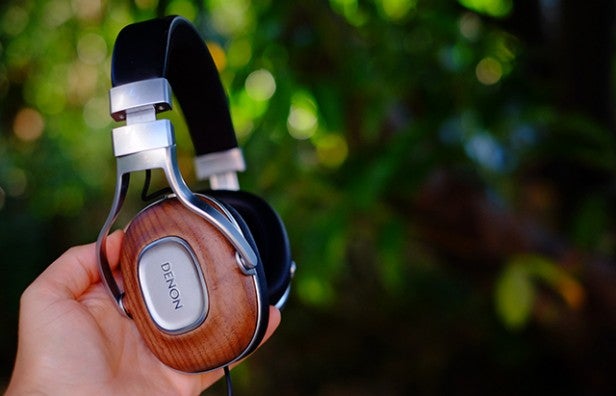 They’re closer to something Bowers & Wilkins might produce – but we still think the look is contentious. After initially turning up our noses up at Denon’s wood-topped pair, we’ve grown to appreciate their singular style. Feast your eyes on our photos and make up your own mind.

What we’re glad to see is that with the AH-MM400s, Denon has fixed all the off-putting design issues of former large headphones. The cups sit fairly close to your head, as does the headband. Plus the design feels low-key, even if all that wood takes the set in a different direction visually. 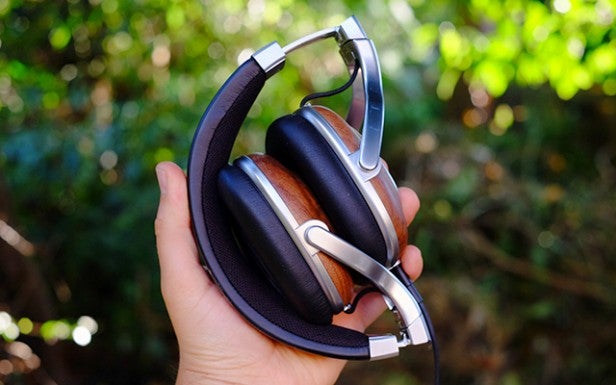 Construction quality is good. The hinged, fold-up design is super-smooth, and for the most part the Denon AH-MM400 feel luxurious. Unlike some of the higher-end Momentum sets, however, there’s no real leather here. It’s a high-quality enough synthetic version to make the difference in comfort minimal.

Those parts of the headphones not covered by foam are metal, and the outer elements of the cups are either wood or metal. It all adds up to reassure you that the Denon AH-MM400 is £300 well spent. But there’s one disappointment: the metallic part that surrounds the inner area of the cups is actually plastic covered with metallic paint. 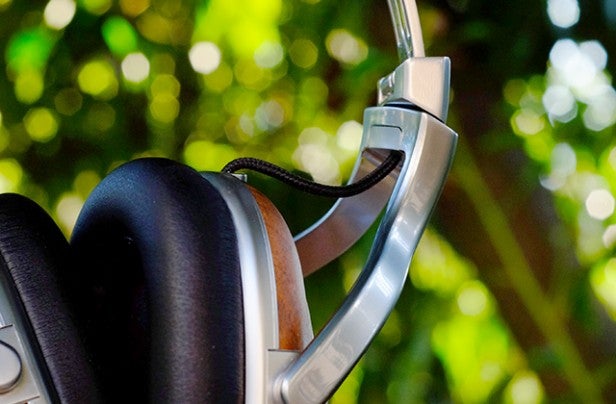 While we can accept that plastic may help to keep the weight down, the cheap-looking seam also doesn’t help matters. In addition, that silvery coating is easy to scratch off, revealing darker plastic underneath. It’s the one part of the Denon AH-MM400 that feels less than immaculate.

There’s no sense of compromise when you put on the headphones, however. The Denon AH-MM400 are sumptuously comfortable, with deep foam pads that circle around your ears quite tightly. The headband, too, grips to your head with mid-firm pressure. They’re even more comfortable than the looser-fit Sennheiser Momentum 2.0. 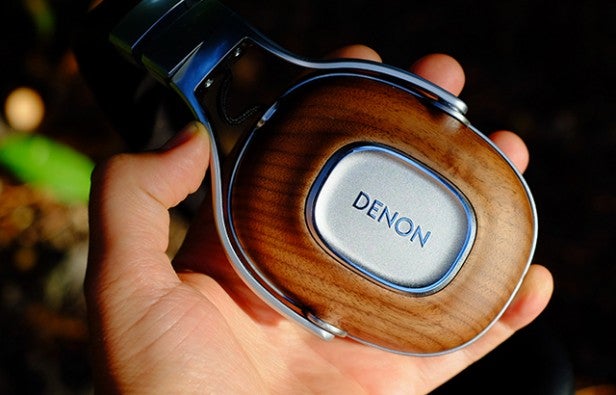 Since the cups are somewhat shallow, how comfortable the AH-MM400 feel will depend on your ears. If your ears are on the larger side, we’d suggest trying a set on. I’ve been wearing the Denon AH-MM400 for up to five hours at a time with no sense of fatigue. They should make a lovely fit for most heads.

Having a reasonably firm headband aids with very good passive isolation. They’re a perfect fit for trains, buses and so on. At this point it does without saying the Denon AH-MM400 are fully closed-back headphones. Any sound ports they have are tiny. 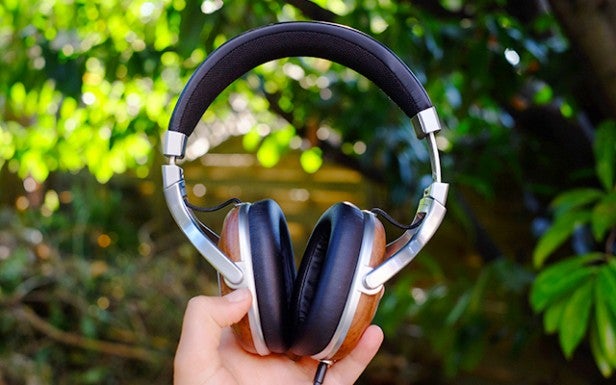 The last flagship “mainstream” headphones we reviewed from Denon were the bassy-heavy AH-D600. For the AH-MM400, however, Denon has returned to its roots. They offer a much more natural-sounding signature, which we simply can’t imagine that anyone wouldn’t like.

For a closed-back set they have a wide soundstage, alongside a powerful – but not overpowered – bass that’s satisfying in noisy environments. In terms of sound personality, we’d describe them as smooth-sounding and natural, rather than attention-grabbers.

The one part of the frequency spectrum that feels a little massaged is the treble. This becomes apparent only in direct comparison with rivals such as the Oppo PM-3, where it seems dips and minor peaks have been added to give a sense of detail while toning down parts that might come across as harsh or sibilant. 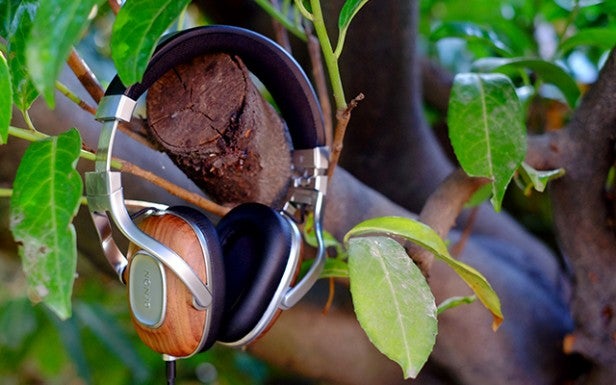 Headphones such as the Denon AH-MM400 are among the trickiest to explain, since there’s no clear focus on a certain part of the frequency range and no major deficiencies. They simply sound great – all the time, with all kinds of music. They’re involving, offer good separation and a hi-fi-style sound that’s classic Denon.

To look a little deeper, we’re going to compare the Denon AH-MM400 with some of our favourites in this higher-end portable class, the Sennheiser Momentum 2.0 and Oppo PM-3. 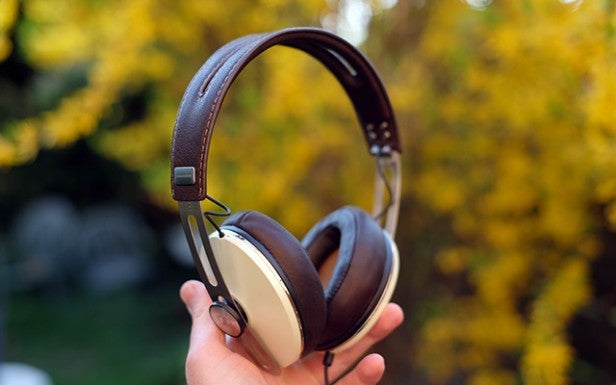 The Denon AH-MM400 lack some of the enthusiasm and energy of the Sennheiser Momentum 2.0. This is provided by a low-bass skew – one of the key draws of the Momentum series. If you want bass thrills, the Sennhesier pair may suit your taste better. They also seem to have a slightly wider soundstage, although the AH-MM400 sound pretty wide and involving too.

It isn’t an easy win for the Sennheisers, though. By stepping off the bass a touch, the Denon AH-MM400 end up sounding a more natural – perhaps a little more grown-up. They comes across as having a flatter response, which many may prefer. 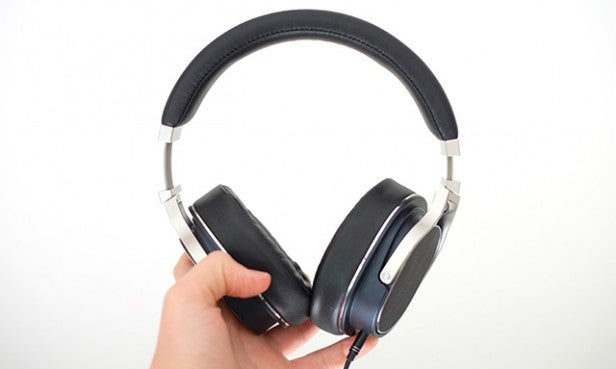 One of the few sets of headphones that have received a 10/10 from us are the Oppo PM-3. These are planar magnetic headphones, using a completely different driver style to the 40mm dynamic driver of the Denon AH-MM400.

The Denon headphones have a larger-scale sound. They’re fuller, with a slightly more energetic bass. Parts of the treble have a bit more emphasis too, giving the AH-MM400 the impression of being slightly brighter.

However, the Oppo PM-3 deliver top-tier definition, separation and texture in the mid-range – which the AH-MM400 can’t match. You’ll have to listen closely to appreciate it, but in our opinion they give the Oppo PM-3s the edge. As with the Sennheiser comparison, all will depend on what you want from your sound, however. 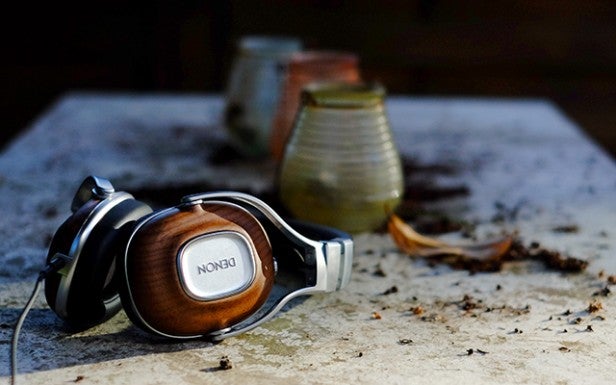 The AH-MM440 are the first Denon headphones that feel like they belong among the top contenders in the portable “lifestyle” class. Back in the old days, Denon used to make larger, less style-aware headphones; more recently it’s designs have become too brash, as has the sound signature.

With the AH-MM400, Denon is back on track. They have the comfort and sound quality we’re after, providing a slightly more grown-up alternative to all the urban-style headphones out there.

Sound quality is great, comfort is exemplary – as long as your ears aren’t too sizeable – and while the design is sure to divide opinion, at least it doesn’t seem like a copycat move.

We’d put them roughly on par with the Sennheiser Momentum 2.0, so consider the differences in their approach to sound to see which might be best for you. For detail, we’d still pick the Oppo PM-3s over either the Denon or the Sennheiser, but it all depends on the environment in which you’ll be listening. Sometimes a bigger, bolder sound can work wonders.

Denon is back on form: the AH-MM400 are a great set of classy-sounding portable headphones