Invest in the Delonghi Traditional Deep Fat Fryer FS6055 and you’re unlikely to ever go back to messy shallow frying or a perilous chip pan. Not only does its design make it safer and more reliable, its frying results are more consistent and crisper than cheaper models. It could be improved with more guidance – right now, it’s less suitable for newbies than seasoned fryers – and the option to clean every greasy part in a dishwasher.

Draining oil from a deep fat fryer is an unenviable job, but the Delonghi Traditional Deep Fat Fryer promises a solution.

It’s quite simple – there’s a clever hose hidden beneath the handle. Once everything is cool this hose can be unfolded, allowing you to filter and drain the oil into any container you like without lifting or tipping. No mess, splashes or dribbles. And to complete the low-maintenance package, there’s a removable lid, washable odour filter and Teflon-coated bowl, too.

Perhaps what’s most notable about the Delonghi Traditional Deep Fat Fryer is what it’s not. It’s not a stainless-steel, pro-style model; and neither does it have the look of an affordable fryer. Instead, it’s a monochrome blend of matte-effect grey and off-white, which manages to look both approachable and tasteful at the same time.

Behind this elegant exterior are a number of features that you won’t find on cheaper appliances. These include its cool-touch walls – achieved by circulating air between the oil bowl and the outside of the fryer – and the patented Easy Clean System for draining used oil. 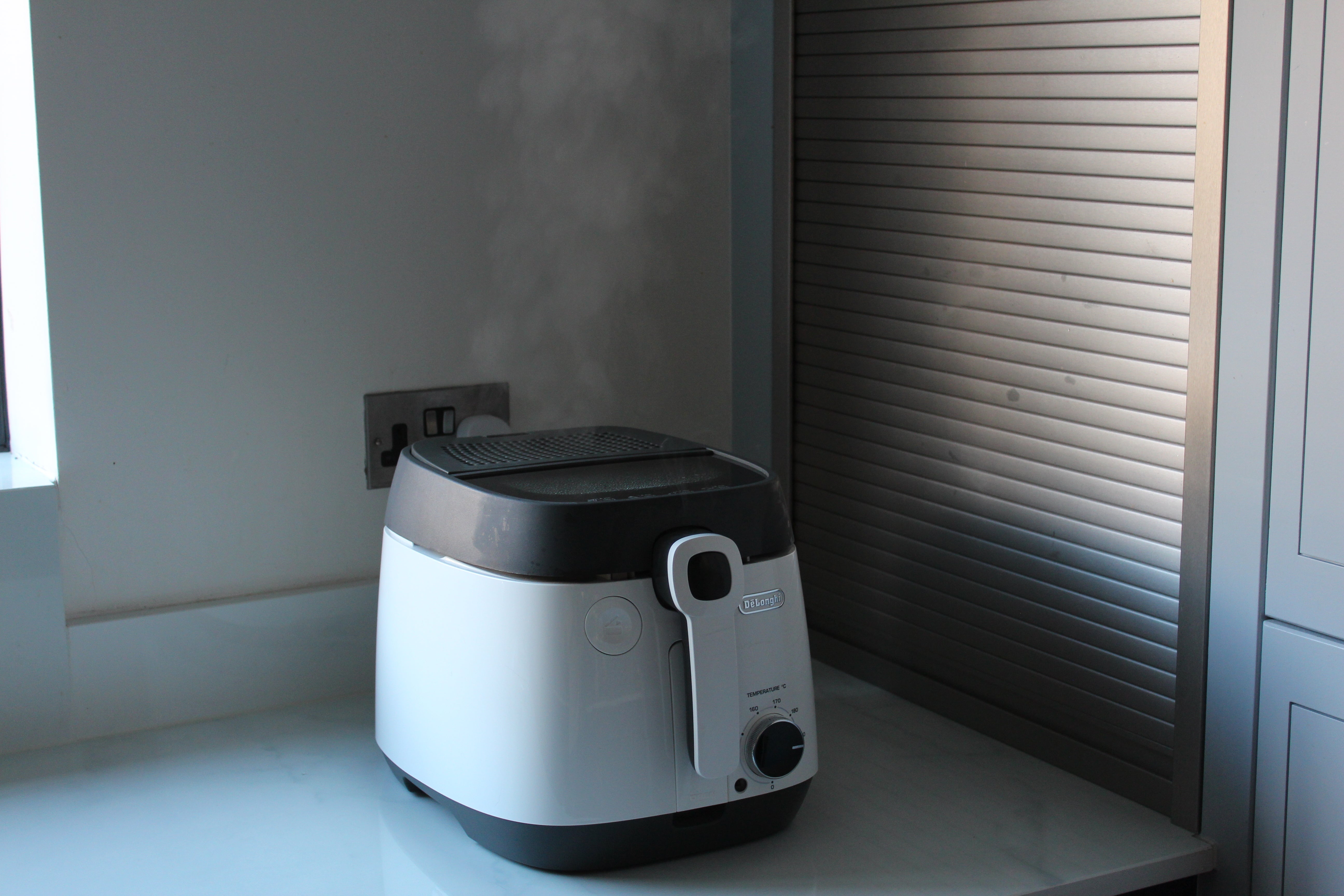 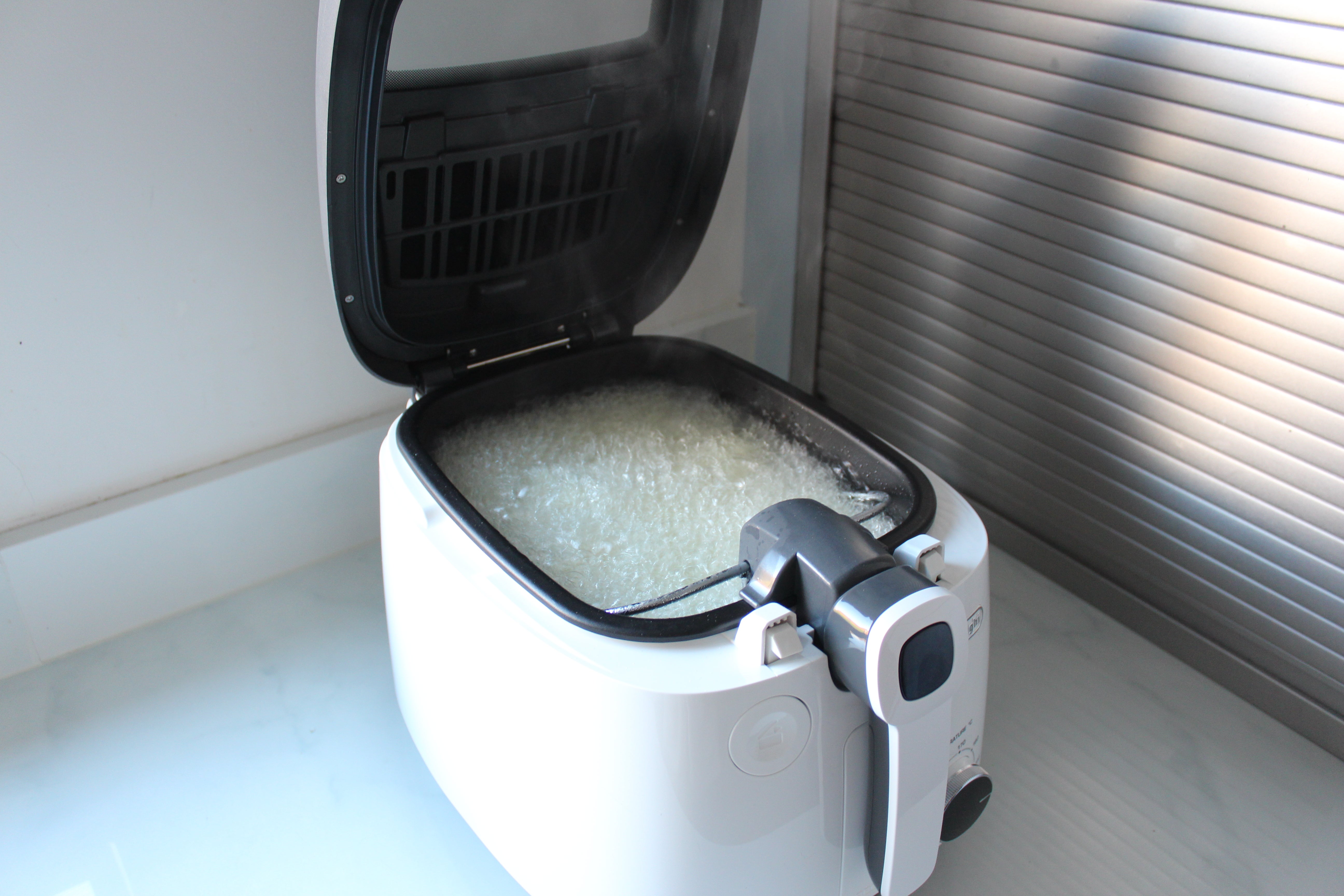 There’s also plenty you’d expect to find on a mid-priced model, including a button for releasing the lid, carry handles, and a hinged basket that lowers food into the oil without fear of splashing. In addition, a removable, washable filter helps to prevent vapour and odours. While this last feature is well-meaning, I found that frying smells still escaped into the house during testing. Most of the steam was effectively channelled out through the filter, rather than the sides of the machine during use. However, opening and closing the lid inevitably releases odours into the air.

What seems to have been forgotten is written guidance for getting the best out of your fryer. The instructions comprise diagrams, with a cooking chart of food types, times and temperatures – but not much else. This makes using the Delonghi FS6055 much more difficult if it’s your first fryer, and therefore prone to poor results.

On the plus side, the controls are beginner-friendly. Setting the temperature is as simple as turning the dial to a heat between 150-190ºC; an indicator light goes out when the temperature has been reached. A timer would be a handy addition, though.

There are a few other quirks to work around. One is that condensation can gather quite quickly on the glass viewing window before dripping back into the hot oil upon opening the lid. I found this especially tricky when trying to remove chips after frying. The drips of water made the oil spit, so I had to wait until this had stopped before I could take out the basket – which cooked the chips a little longer than planned.

In addition, minimum and maximum fill levels for oil within the bowl were difficult to see – and, as the bowl was fixed, I couldn’t remove it to look closer.

Overall, the frying results were excellent, with even levels of browning across battered fish, chips and doughnuts. The basket accommodated large amounts of food, while the element-free bowl lent itself well to drop-in fried food as well. 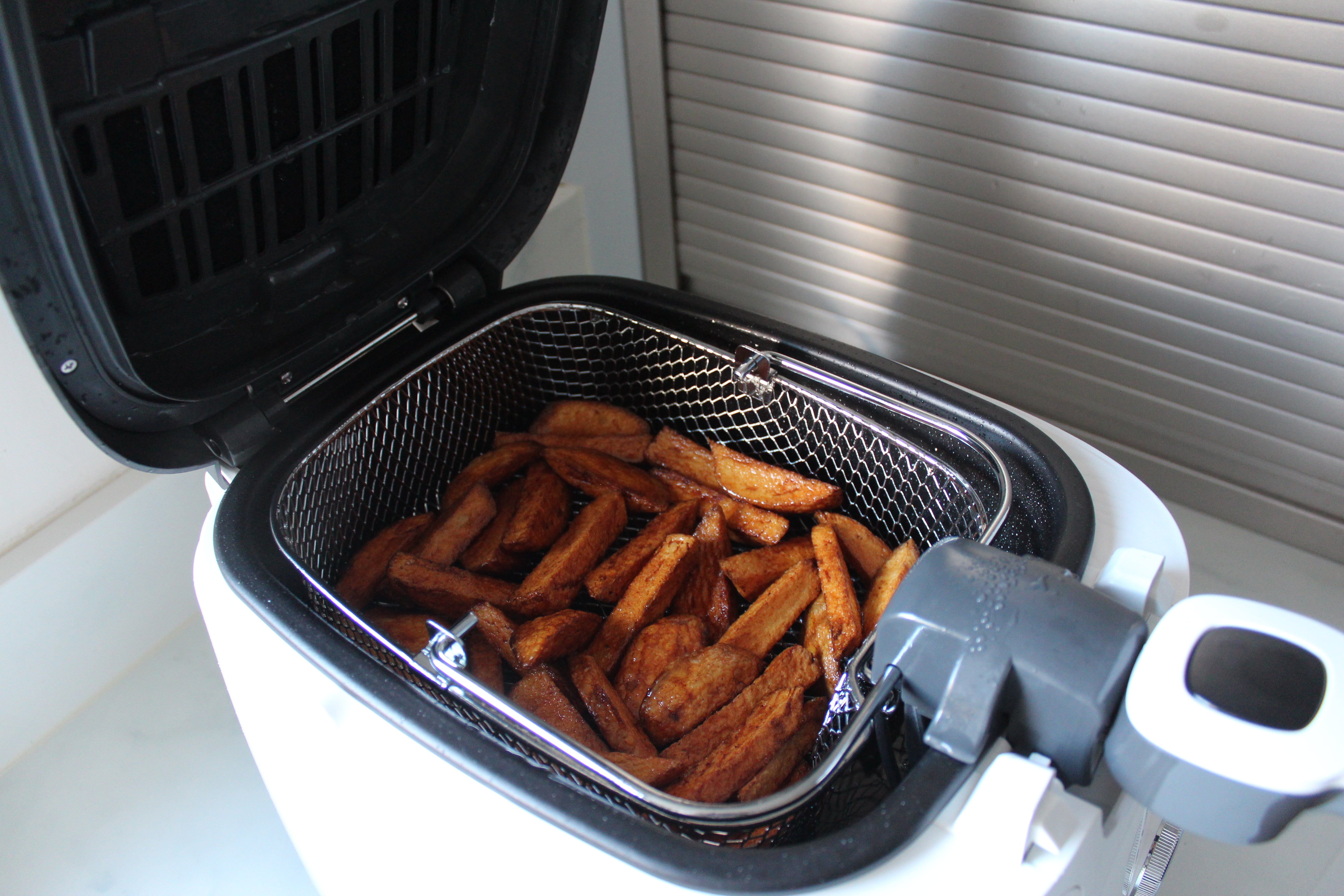 When it comes to cleaning, it feels like this fryer gives with one hand, but takes with the other. The effortless nature of its Easy Clean System for emptying out used cooking oil can’t be underestimated – but there’s still the task of cleaning out a fixed bowl by hand, which can’t be soaked or popped in a dishwasher.

Admittedly, the non-stick coating on the bowl removes the need to scrub, but wiping out oil from the bowl, followed by trying to remove debris from the hose, took time. The draining itself was straightforward – a stopper pops out of the hose before relying on gravity to let most of the oil run away through a hole in the bottom of the bowl.

Fortunately, most of the other parts were easy to clean: the lid is both removable and dishwasher-safe, as is the basket. The filter isn’t, so required a hand-wash, but a plus point is that it can be replaced once it’s beyond being refreshed.

Should you buy the Delonghi Traditional Deep Fat Fryer FS6055?

It’s a little more expensive than some mid-market models, such as the Russell Hobbs Digital Deep Fryer, but the good news is that with the Delonghi Traditional Deep Fat Fryer FS6055, you get lots for your money. Easy emptying, a basket with enough room to cater for a family feast of fried food, and an appliance that’s attractive enough to have out on the worktop.

Its size means it’s unlikely to be your best option if you don’t fry on a semi-regular basis, and it may be too large for a compact kitchen. However, if you’re looking for a family-friendly model that combines convenience and safety, then the Delonghi FS6055 is worth the price.