It was just under a year ago when I looked at Dell’s first LCD TV and it was a great unit. But Dell hasn’t rested on its laurels, and has built on the success of its 17in widescreen LCD and produced the W2600 – a 26in widescreen LCD TV.


There’s a lot to say about the W2600, but before I get into the detail let me say that this is the best LCD TV that I’ve ever seen. This comes as something of a surprise considering that Dell is definitely a computer company rather than a consumer electronics one, but as Bob Dylan once said, the times, they are a-changin’.


First and foremost, the widescren LCD panel that Dell has used in this device is superb. The viewing angle is staggering and even looking at the screen completely side on doesn’t result in any wash-out or hue changes. The vertical viewing angle is just as good, and the picture remains bright and colourful whether you’re standing or sitting. Whether watching TV, DVD playback or a PC signal, the W2600 produces a well resolved image with vibrant colours and even lighting. High definition content in particular looks amazing on this screen, although Europe is still well behind the US when it comes to HD.


What separates this screen from a lot of other LCD TVs that are available is the native resolution. Many LCD TVs sport low native resolutions, since they’re aimed at the consumer market rather than the computer user that also wants TV functionality. In fact many LCD TVs don’t even offer PC connectivity. But Dell has been true to its PC roots and made sure that this screen is good for PC use as well as home entertainment duties. OK, so 1,280 x 768 isn’t a super-high resolution by PC monitor standards, but it’s high enough to work on and perfect for a Media Center PC.


The LCD panel is flanked on either side by large stereo speakers, which, I have to say, spoil the overall aesthetic appeal of the device. However, there is method to Dell’s madness, because these speakers sound excellent, and there would definitely be no need for an external speaker set. Obviously if you wanted to get a full surround sound effect you’d want external speakers, but even at 26in, this screen is too small to be the focal point of a full-blown home cinema system, so the integrated sound hardware is pretty much perfect.


The screen and the speakers are surrounded by a thin silver bezel that enhances the overall look. There’s a single Dell logo under the screen in the centre and all the controls are hidden on right side of the chasing, resulting in a minimalist look that will suit the style conscious technology junkie.


Unlike the 17in W1700, the W2600 doesn’t have a height adjustable stand, but then it is a much larger and heavier screen. The stand does however allow the screen to be panned from side to side easily. The stand itself is finished in black and silver and complements the screen very well.


One of the W2600’s party pieces is that it has dual analogue tuners. This means you can make full use of the Picture-in-Picture facility – allowing you to keep an eye on one channel while you’re watching another. The second picture will be super-imposed into the corner of the display, and you can choose which corner you would like it to reside in. Dell has kept things tidy by putting the aerial splitter inside the chassis, so a single aerial connection will feed both tuners.


TV reception is definitely the best I’ve seen, and even in the poor reception area of Bracknell, the Dell managed to lock onto all the channels and produce a decent picture for all of them.


While I’m on the subject of connections, I have to say that the W2600 has the most comprehensive set of connection options that I’ve ever seen on a screen. For PC connection, there’s both DVI and D-SUB ports with corresponding audio inputs in both twin RCA socket and 3.5mm headphone jack flavours.

I was both impressed and pleased when I looked around the back of the W2600 and found not one, but two sets of component video inputs, both with their own set of audio inputs. Also lurking around the back is an S-Video input with its own audio connectors and a composite video input, also with two RCA ports for audio input.


Next to aerial input is a set of composite video and audio out ports, in case you want to capture from the TV tuners. Finally at the rear you’ll find two SCART sockets – one is set for Y/C (S-Video), while the other is set for RGB. Strangely, there seems to be no way to pump a composite video signal through either of the SCART ports, but there are two other composite inputs available. That said, I wouldn’t encourage anyone to use a composite signal unless they really had no choice.


Well that’s all the connection options at the rear, but it’s not all of the connection options. On the left side of the casing you’ll find another S-Video and another composite video input, along with coresponding RCA audio inputs. So, you have a total of 10 input options for the W2600 – that should keep even the most demanding AV user happy.


There’s also the option of viewing images stored on memory cards, but the memory card reader wasn’t installed on the review sample that I received from Dell. The card reader is available as an option, but it will set you back around £55. 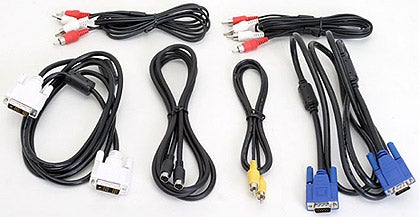 Rounding off the package is a slim and stylish remote control finished in black and silver like the screen itself. The back of the remote has a rubberised finish that makes it easy to hold. The remote has just about every button you’re ever likely to need, but it’s still intuitive to use. Navigating the OSD menu from the remote is very simple, and there’s a wide range of options from changing the equaliser settings for the sound to changing the colour profile to suit your video content.


So, this is the best LCD TV that I’ve ever used, but all that high-quality has to come at an astronomical price right? Wrong! The most amazing thing about this screen is that Dell is selling it for only £998 including VAT and delivery. I’m usually an advocate of the old saying “you get what you pay for”, but in the case of the Dell W2600, you’re getting far more than you’re paying for.


Not only is the W2600 the best LCD TV I’ve ever used, but at £998 it’s an incredible bargain. If you’re thinking about getting a media PC, or just want an LCD TV with a dizzying array of connection options, the Dell W2600 should be top of your list.