Dell has recently introduced a new range of small business PCs it calls Vostro. It claims they cost less than other Dell PC ranges, while having very similar specifications. The Vostro 200 describes the Midi tower case in which the PC is built, rather than a specific configuration. As is normal with Dell machines, you pick the options you want on the company’s website and get a PC built to your own requirements. 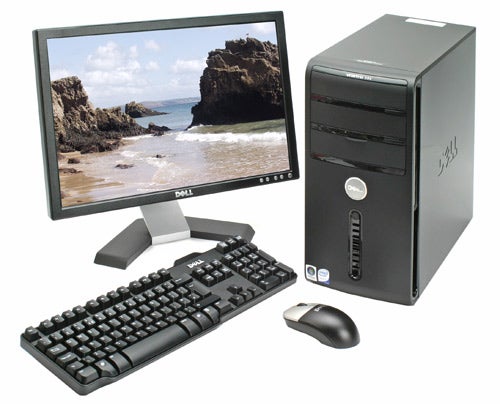 The configuration supplied to us for review is close to the top of the range, so close in fact that several of the options aren’t currently available in Dell’s configuration screens. The company assures us, however, that options for processor, graphics card and hard drives seen in this machine will soon be available to customers.


The smart black case with high-gloss side panels has unusual air intakes just behind the front fascia. Although it’s low-profile, it still has room for three front panel drive bays and two internal ones. At the front are a CD-RW/DVD combo drive and a memory card reader, which supports all the common types. There are also four USB 2.0 sockets and a pair of audio jacks, all of which suggests rather more than a business PC to us. 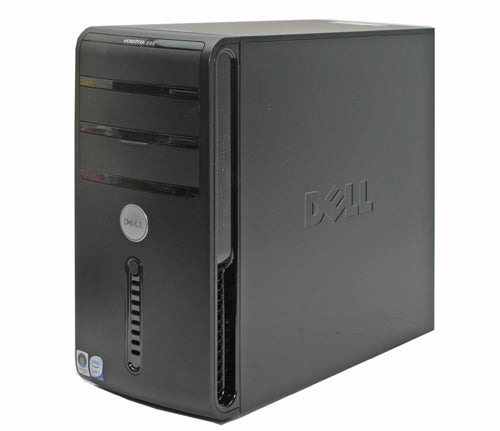 At the back, things are a bit sparse, with just four USB 2.0 sockets, a 10/100 Ethernet port, analogue, DVI and S-Video outlets and 7.1 channel audio. There’s no FireWire or Wi-Fi on this machine.


Dell includes a wired, optical mouse and an Apple-style skeleton keyboard as standard and this system came with a 19-inch, widescreen LCD monitor. The screen is neat and well designed, with main controls along its bottom right surround. The stand allows only for tilt – no swivel or height adjustment – but the display has an internal power supply and supports both analogue and digital video inputs.


Base level Vostro 200 systems use Celeron 420 processors, but the version supplied to us was fitted with a Core 2 Duo E6320, running at 1.86GHz, with 4MB of level 2 cache. The chip is supported by 2GB of main memory, giving plenty of room for the copy of Windows Vista Business, which is pre-installed. Dell banners the Vostro as ‘Windows Optional’, but this appears to be which version of XP or Vista you want bundled, not an option for a bare machine or one equipped with Linux. 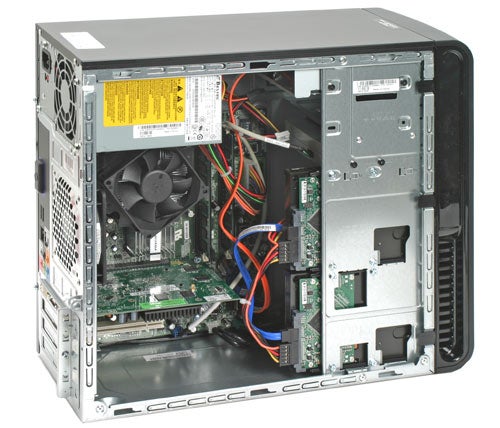 Graphics comes from a discrete ATI Radeon X1300 Pro graphics card, though again, basic machines come with an even lower-power Intel X3100 chip, integrated into the system board. The X1300 Pro is more than enough to handle Vista Aero and the system has a Windows Experience Index of 4.2, not bad for a small-business PC, but it’s no great shakes for anything more.

One of the most interesting aspects of the review system was its provision of twin, 320GB Seagate Barracuda hard drives, configured as a mirrored RAID array. Combined with a copy of Norton Save and Restore, the system provides automatic backup of all important programs and data, giving you a higher level of data security than a single drive system. This has long been a better RAID configuration for business customers than a striped array, which gives improved drive speeds, but no extra security.


Quite a lot of the options fitted to this review system are extras over the basic price of the Vostro 200 and this includes a copy of Microsoft Office 2007 Basic, rather than Works 8.0. The extra £90 asked for this is probably worth it, if your business requires serious software support. 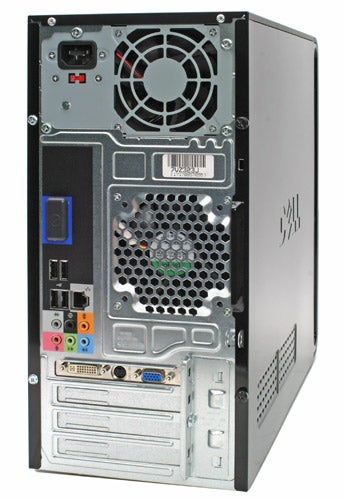 The Vostro 200 is a very easy PC to use and everything is in place for quick and useful computing straight out of the box. There’s sufficient power in the processor to handle the extra backup tasks needed to take advantage of the mirrored RAID.


Running PCMark 05 produced an index of 4916, not at all bad for a machine ostensibly designed for small-business use. In fact, we can see little difference between this Vostro 200 and several mid-range home PCs we’ve looked at in recent months.

OK, Windows Vista Business doesn’t include Media Centre, so there’s no option to watch a bit a TV, but the specification and extras like multi-channel audio, memory card readers and to some extent the widescreen monitor seem superfluous to most small-business environments.


The PC comes with a one year, on-site warranty and this can be boosted to three year cover. Surprisingly, although McAfee Security Center comes pre-installed on our system, no subscription is included in the basic price, so you need to specify either McAfee or Norton as an extra, when ordering.


This is a good, solid small-business PC, which would be even more useful in a home office, where you might want entertainment and leisure services as well. Although the base price of £276 (£235 ex VAT) looks extremely attractive, bear in mind that to get to the specification reviewed here costs a lot more than that. As with all pick ‘n’ mix, you can end up paying more than you expected.