Back in May 2005 I reviewed the Dell 2405FPW that at the time, was nothing short of a revelation. It was a 24in widescreen panel with a resolution of 1,920 x 1,200. Others had got there first but no one had been able to touch Dell’s fantastic launch price of £860. Though the bizarre mystical world of Dell’s supply chain and demand meant that the price went up and down like a yo-yo, it was available consistently and for less at Overclockers. Some brave souls were even able to pick it up off eBay brand new for around £500 – a real bargain.


The ground breaking display was followed by a disappointing effort from Acer, while the Samsung SyncMaster SM244T proved to be rather more impressive. 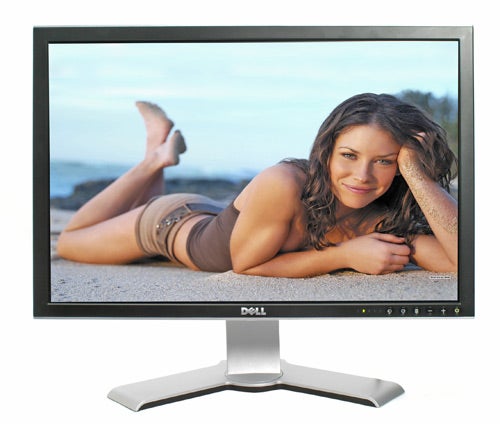 The changes from the 2405FPW are thus: the new panel is based on S-PVA technology rather than PVA and is the same panel used in the Samsung 244T, so I was expecting to be equally impressed by the Dell as we were by the Samsung. The upshot of this which is that response time is down from 12ms grey-to-grey to only 6ms. The black to white time is the same however, which indicates a more aggressive overdrive mode on the new panel to reach the lower figure. The other change is the addition of HDCP support over DVI, which is important if the technology is employed in HD-DVD and Blu-ray, and if Sky chooses to use it on its HD box.


The quoted 1000:1 contrast ratio figure is the same, while the brightness is actually down at 450cd/m rather than 500cd/m. There’s a built-in card reader containing slots for Compact Flash, Smart Media, SD, MMC and Memory Stick and there are also two USB 2.0 ports. The connectivity is also the same, with DVI, VGA, composite, S-Video and component. Very usefully Dell has very clearly labelled each input with a diagram, making it easy to find the relevant connections. 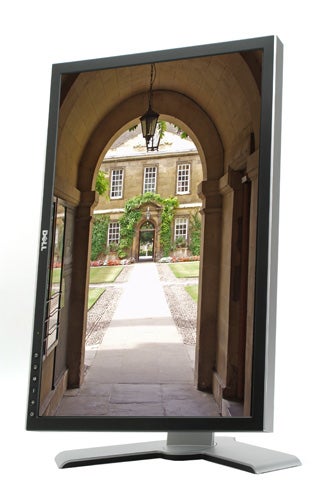 The main differences then are visual. The styling has been updated to match that of the Dell 30in 3007, a thinner bezel on a triangular silver stand. It rotates easily on the base and as with the previous model is height adjustable and can also rotate 90 degrees to portrait mode, just by pushing down gently on the right hand side. Dell has also improved the design by making it far easier to set up – the stand clicks on more easily than it did on the 2405.

At the bottom right of the screen are six buttons. The far right one is the power button while the left hand side one is for moving between the five inputs. The next one in from the left is for enabling the PIP (Picture In Picture) and PBP (Picture By Picture) option, so you can view multiple inputs at the same time.


The next three inputs are for controlling the slick looking OSD. Pressing the centre button brings up the translucent controls that appear along the bottom rather than the centre as is more common.


Navigation is helped by the use of large and clear icons, unlike the obscure symbols that so many OSD employ. One thing I noticed immediately is that there was a brightness control but no contrast. It turns out that a contrast option only appears when the display is connected via VGA cables – via DVI its brightness only.


There is a ‘Color Settings’ option but this doesn’t use colour temperatures, but has presets for making the image more red or blue and the effect on each of these is extreme – I’d leave it on Normal. You can also switch between PC and Mac modes, as these use different colour values. There are three image modes to choose from, ‘Desktop’, Multimedia and Gaming, which alter brightness and colour settings. Multimedia and Gaming also employ a Faroudja DCDi deinterlacing, which is turned off in Desktop mode. 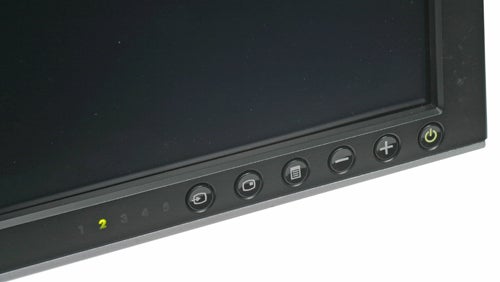 It’s a win then for design and features but what of the all-important image quality? This display has been available in Japan the US already and the Internet has been full of reports of flaws, such as banding, text fuzziness and ‘input lag’.


The monitor I received for testing was the A00 revision, which was claimed by many to have serious banding and text fuzziness. However, checking in the service menu it seems the Firmware has been updated to the latest version as supplied in the A01 and A02 revisions. The issue then is not what version you receive but the Firmware on it. 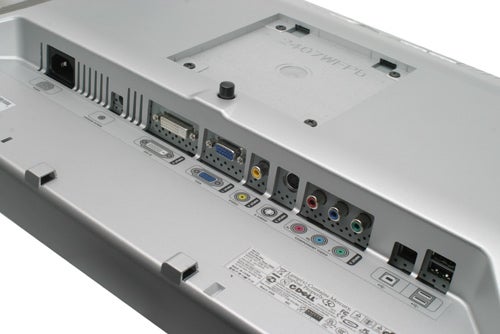 Dell itself has actually acknowledged the problem on the early Firmware revisions and there’s a very good page documenting the issues here, which also tells you how to access the service menu to check the Firmware. Take great care not to change anything though as it could make any issues worse.

Plugging it in and turning it on, I was immediately taken by the brightness of the image and the sharpness – icons and text looked particularly clear. That seems to knock the text fuzziness issue on the head. Working for some time in Word documents was a pleasure and having this level of resolution is a major boon for working with spreadsheets and images.


However, firing up our usual DisplayMate revealed that there were indeed banding issues, which could clearly be seen in the 256 Level Intensity colour ramp. In Multimedia and Gaming modes, which enable the Faroudja DCDi deinterlacing, the banding was quite severe. Switching to Desktop mode though, it was significantly reduced and was barely visible. Moving to a VGA connection the banding was reduced further still, but at the expense of overall sharpness, which is not what you want on a screen of this size. 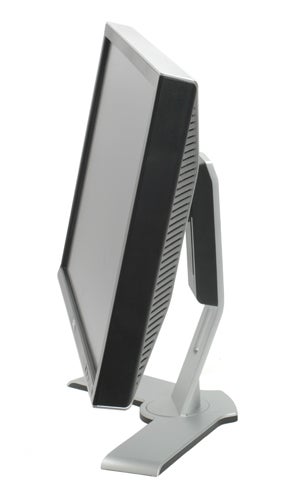 In the 64-step grey-scale test the Multimedia and Gaming mode also caused problems and there was compression at either end. In desktop mode, the light steps at the edge of the screen could be resolved but it was a mass of solid colour at the black end. The claimed contrast ratio of 1000:1 is probably quite optimistic.


Working with large high-res images, I actually couldn’t see any effects of the banding, but colours and details did look subdued compared to the best I’ve seen. Comparing with other monitors it was a little like the difference between 16-bit and 32-bit colour, though not nearly as extreme. However, it’s still an issue and if colour accuracy is important in your line of work then I wouldn’t recommend this screen.

I then tested by watched a Superbit version of Crouching Tiger Hidden Dragon on DVD and then I tried some downloaded HD movie files. All appearing striking and smooth, with no hint of response time issues and there was detail in dark scenes despite the lack-lustre DisplayMate performance.


It’s undeniable though that while overall performance is very good, if we’re penickty – and we should be – the Dell quite doesn’t match up to the image quality of the Samsung 244T. The Dell does have a built in USB hub and card reader, which are very useful, but for those whom picture quality is an absolute priority that’s not really going to be enough to draw people away from the Samsung.


What would draw people away is price, but surprisingly the Dell doesn’t significantly undercut the Samsung. The cheapest we could find the Samsung 244T is £812 at Savastore, which is less than Dell wants for its screen. However, once again Overclockers is undercutting Dell, and you can get it there for £764. 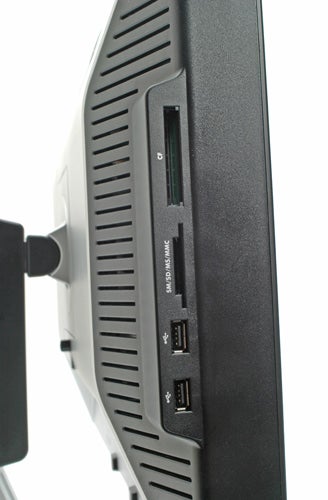 The Dell is an improvement in some areas over its predecessor, namely in design and specification, but thanks to banding issues, it’s a step down from the 2405WFP. However, unless colour accuracy is a priority it’s not something that most people will notice. For general Windows work, gaming and movie watching I found this screen to be fantastic and I’ll certainly rue going back to my 17in LCD when Dell comes-a-calling for it back.


Dell has produced another fine large display at a good price, but minor flaws in image quality mean that unless Dell can lower its prices, we recommend going for the Samsung 244T instead.