Miniaturisation is big these days. Asus’ brilliant Eee PC not only had a profound effect on the notebook sector, single-handedly laying the foundation that made the netbook a success, but it also allowed the company to expand that tiny form factor onto the desktop in the form of the Eee Box.


The problem with the Eee Box and its likewise Atom-using peers is that, unlike Apple’s Mac Mini in that system’s heyday, it lacks processing power. Current 1.6GHz Atoms are great chips due to their low power usage, but try to run some high definition video or multiple apps, and they’ll struggle. But fear not, you can (on paper at least) have both a minuature and powerful system courtesy of Dell’s Studio Hybrid Desktop. Essentially, what you’re getting here is the internals of a laptop stuck in a desktop case. And while this is hardly the first PC to do that, few we’ve come across can match the Studio Hybrid for compactness and style. 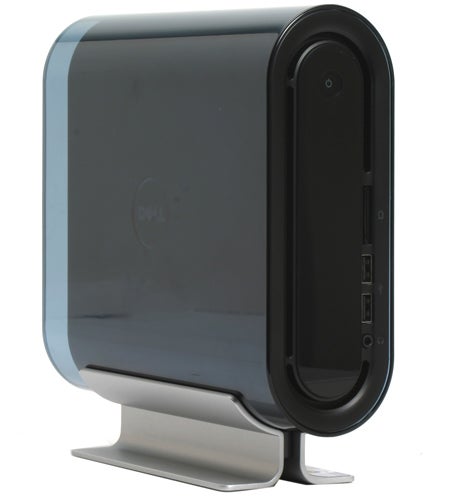 For such a small device, the Studio Hybrid is shipped in a rather large box. That’s a good thing, though, as the extra space fits lots of extras, including a metal stand along with a keyboard and mouse set that, aesthetically at least, makes Dell’s usual peripherals look rather cheap. Equally pleasing is the Studio Hybrid’s super-slim power brick, which makes a change from the lumps we often see. 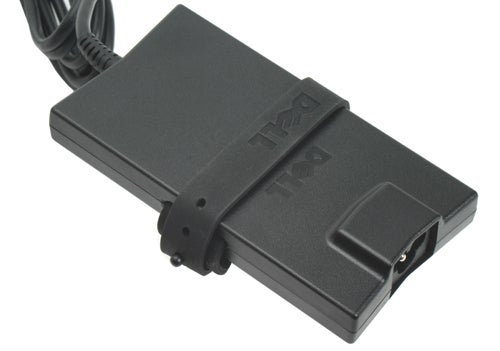 Also included is a cable clip, shaped to resemble the machine itself; a cardboard sleeve containing the manuals and warranty information; and the system CDs. Among these you’ll find an Audigy driver for the integrated Sound Blaster chipset, an applications disc, a driver disc, and OEM versions of Microsoft Works 9 and Windows Vista Premium 32-bit.


The wireless keyboard and mouse, meanwhile, match the Studio Hybrid’s sleek and shiny looks perfectly. Saying that, they’re only available in black, so if you want them to match the system you should go for the Slate Grey version. The three-button mouse has a piano-black, one-piece body with rubberised sides. Unfortunately the scroll-wheel does not support four-way scrolling, but the mouse fits nicely in the hand, with its two AA batteries giving it decent weight. However, it doesn’t come close to the comfort or quality of even budget Microsoft or Logitech devices.

The keyboard is rather slab-like and has a large circular volume control flush with its surface. Its keys have plenty of travel but don’t offer a pleasant tactile feedback and the spacebar is noisy. Overall, peripheral-wise, Dell provides a shining example (pun intended) of why you can’t take such things at face value.

Though the peripherals are a little disappointing, the same can’t be said of the Studio Hybrid Desktop unit. This PC simply oozes style from the moment you take it out of its box. The Studio Hybrid can actually be divided into three parts: the core machine, a ‘shell’ – to use Dell’s terminology – and the stand.


The machine itself is a small unit with glossy black front and back panels. The sides are silver, though you’ll never see that unless you remove the shell. This sturdy plastic shell is an outer cover that slips over the actual machine, serving not only to protect the core unit but also to enhance its look. 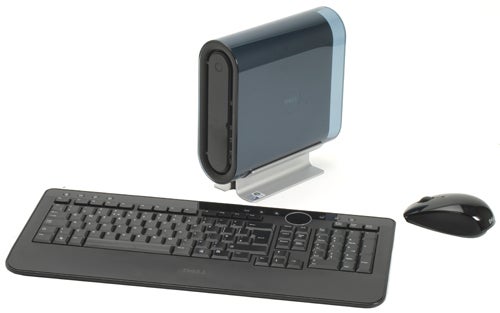 Our model came with the transparent Sapphire Blue but the standard one comes in Slate Grey. However, you can also choose from a range of different colours and opacities, including orange, green, pink and blue, but bear in mind that these add an extra £30 to the price. For £90, you can even get a very smart-looking bamboo shell. Replacing a shell is easy, merely requiring the removal of a single screw.


The overall design is further enhanced by the Dell logo in a circle backlit in white, which is slightly recessed so that it looks like a crescent moon from most angles.

The front is fairly clean, with the Hybrid name and power button also glowing white. At this stage it’s worth mentioning that not only does the PC’s design and shape lend itself perfectly to either horizontal or vertical installations, but there are even some clever internals which will enhance your choice. For example, an internal sensor automatically rotates the LED-lit Hybrid name depending on how you orientate the machine. This works instantly and is one of those extra touches that makes you feel like you’re getting your money’s worth.

The stand is an important part of the Studio Hybrid’s overall design, and again a bit more thought than usual has gone into its design and construction. It is made of metal and features a matte finish that complements the PC unit nicely, and has large protective strips on both sides to prevent damage to either the unit or your desk.


The most interesting aspect is its modular nature, which reminds me of those Transformer toys you have to puzzle out. If you want to change the Studio Hybrid’s position, all that’s required is to take the metal stand apart and reassemble it so that the PC can lay horizontally or stand vertically. 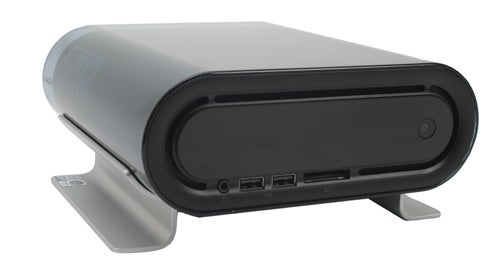 Getting back to the machine’s front, there are no flaps hiding the connectors, which consist of two USB ports and a headphone jack. Instead, they’re integrated into the gap running parallel to the shell’s outline, as are the slot-loading DVD-writer and a memory card reader which will take SD, SDHC, MMC, Memory Stick Pro and xD cards. The eject button for the optical drive, by the way, is a touch-sensitive icon which only lights up when a disc is in the drive.


The Studio Hybrid’s back is also very tidy, with a good selection of ports. Mini-FireWire joins three more USB ports and a gigabit Ethernet port. Audio is competently covered by analogue line in/out ports and S/PDIF, while for video there’s a fully digital selection of HDMI and DVI – hurray for the death of analogue! But don’t worry if your monitor only has a VGA connector: Dell kindly provides a DVI cable that splits into VGA and DVI. One disappointing omission is e-SATA, which is an even greater pity when you consider that most recent laptops offer this.

The reason for this omission also affects performance: the Studio Hybrid Desktop actually uses the outdated Centrino platform, rather than Centrino 2. This is reflected by its use of a 2.1GHz Intel Core 2 Duo T8100, which runs on a slower 800MHz front side bus rather than the 1,066MHz you’ll find with newer Intel processors.


Probably the most damning aspect of using this chipset is that graphics come courtesy of Intel’s GMA 3100 integrated GPU. While none of Intel’s integrated efforts can reasonably be called capable when it comes to games, this specimen is particularly feeble. At 1,680 x 1,050, the most common widescreen resolution for desktop monitors, Dell’s Studio Hybrid Desktop only managed 10.7FPS at medium detail in our lightweight TrackMania Nations Forever benchmark.

The rest of the Studio Hybrid’s specifications aren’t particularly impressive either, with only 2GB of 667MHz DDR2 RAM particularly stingy in this day and age. Of course this being Dell, you can upgrade the memory to 3GB at the click of a mouse button, but this will add an extra £30 onto the price, taking the overall system to well above £600!


On the other hand, considering the weak processor and graphics, 2GB might be as much as you’ll need. At least storage is generously taken care of by a 320GB hard drive, meaning most users should have plenty of room for music, photos and home videos. On the software side, you get a relatively clean install, compared to other manufacturers, though the pre-installed Google Toolbar is quite resource-hungry. 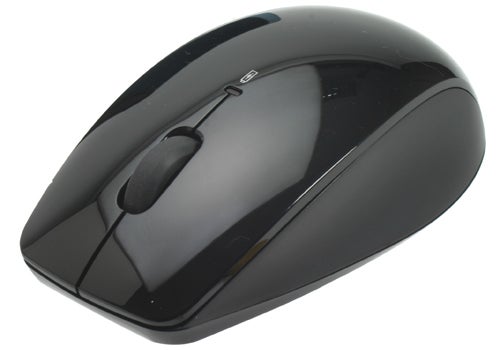 There’s a custom autumn-leaves wallpaper to help you feel good about your expensive purchase, and you’ll also find the Dell Dock – a launch bar reminiscent of the one in Mac OS X. This is a genuinely useful alternative to the start bar in some respects, although a similar applet can be found on the Internet for free.


Overall, what we’re left with is a machine that’s powerful enough for everyday usage, but the problem is that you’re paying over the odds for outdated notebook internals. General performance is quite poor, even being beaten by Dell’s own Inspiron 1525 which we reviewed over half a year ago! 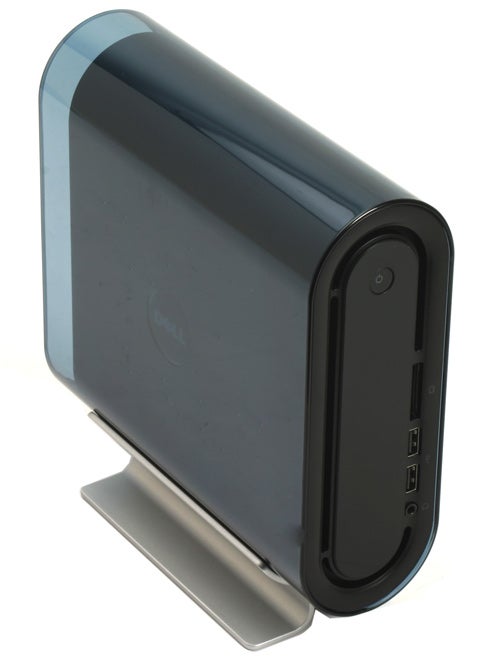 If you’re simply looking for a fairly small machine that uses little power, you could get a Centrino 2 laptop like Medion’s Akoya S5610, which offers far better specifications and more connectivity for nearly £100 less than the cost of the Studio Hybrid Dell sent us. That said, you can spec the Dell to a more competitive price by downgrading to a lesser 1.86GHz T2390. Yes you’re getting slower and older components for your money, but in real-life activities such as word processing, web browsing or sending emails the difference will be nigh-on unnoticeable.


If you want an attractive mini desktop PC, the Studio Hybrid is a decent alternative to Apple’s Mac Mini. In fact, the Studio Hybrid offers better connectivity, a faster CPU, more memory (albeit with that £30 upgrade), twice the hard drive capacity, in addition to those various colour shell options.