Dell’s Studio range of laptops first debuted last year in the shape of the Studio 1535, but to keep things fresh the PC giant has updated its 15in mainstream offering with the Studio 1555 (15 for short) we’re looking at today. Primarily this is to make the switch to a 16:9 aspect, 15.6in display, but there’s also been one or two design tweaks, new features and hardware options added, so there’s a little more to it than a simple change of scenery.


Being a Dell, the Studio 1555 can be configured to suit all sorts of budgets. For instance, if you select the most expensive options available, you could pay close to £1,800! This would net you a pretty impressive machine mind, with some of the premium options including a Full HD display, a backlit keyboard, up to 8GB RAM, a 500GB hard drive and a Blu-ray Re-writer drive. Conversely, in its most basic form, you could pay as little as £449 and still get what we’d consider a decent budget machine.


Our review unit finds a happy medium between the two. On a normal trading day it would cost around £1,040, though at time of writing Dell is running a special offer that would bring this down to a bargain £763. Dell’s pricing is always prone to fluctuation, so it’s worth keeping an eye on what’s going on. 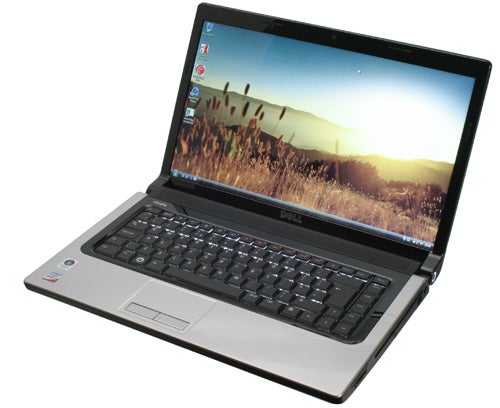 For this you get an Intel Core 2 Duo P8600 clocked at 2.4GHz, which puts the 1555 firmly in desktop replacement territory. This is joined by 4GB of 800MHz DDR2 RAM, a 7,200rpm 320GB hard drive and a 512MB ATI Mobility Radeon HD 4570. Given these specs, this system should be a very brisk performer, something we’ll be putting to the test later on.

Other non-standard features in our system include Bluetooth, Draft-N Wi-Fi and the backlit keyboard, though we were a little disappointed to discover the display is the standard 1,366 x 768 effort, not the £70 1,920 x 1,080 option – an upgrade we’d heartily recommend. As ever this is the beauty of buying from Dell, since anyone who doesn’t want Bluetooth or a backlit keyboard could easily spend it on a better screen or save the money.


Of course, however much you spend, you’ll still get the same basic chassis and the same plentiful connectivity options. Most of this is situated on the left edge, with HDMI and VGA for video, a Gigabit Ethernet port, an eSATA/USB combo port, a dedicated USB port, mini-FireWire and a trio of audio jacks (1 x line-in, 2 x line-out) all neatly integrated.

Following on the right is a 34mm ExpressCard slot – below which sits the multi-format card reader – one further USB port and the power input. Just above the power input is a small white LED to show when the system is charging, which unusually is the only activity light on the machine bar the backlit power button on the hinge. Our only complaint on the connectivity side of things is the lack of standby power USB ports, which is an increasingly common feature and very useful for charging mobile devices.

Compared to a lot of the alternatives out there, the Studio 1555 is quite unfussy in terms of aesthetics. The simple combination of glossy silver and black is only interrupted by the matte speaker section between the screen and the keyboard, with the only spot of colour coming from the orange playback controls on the F-keys. We rather like this simplicity, too. It certainly makes a nice change from the over-elaborate embellishments of many manufacturers. 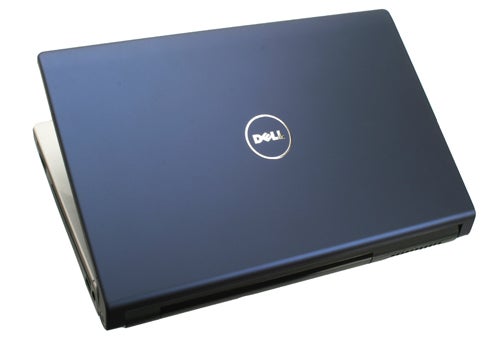 Any more flamboyant touches are reserved for the lid and even then you have total control over what you get. Including the standard matte black finish, there are a startling 17 different lid designs and finishes available, including: five different colour ‘microsatin’ options for an extra £29; eight ‘artist’ designs for £69; and a further three (PRODUCT) RED inspired designs, also for £69. Our system came in the ‘midnight blue’ microsatin finish and very nice it is, too. Not only does it look very classy, its soft-touch rubber-like finish is more durable than the glossy efforts seen on so many laptops.


This is a nice system to use, too. We particularly like the keyboard. It has a sensible uncluttered layout, while keys have a wonderful sharp and positive action. Added to this is the ever-popular backlighting, which has two brightness levels, adjusted using the F6 key. This is the primary action for the key – in fact, all the F-keys are mapped to machine-specific actions. It’s a very useful time saver, but if you’re keyboard shortcut fiend it can be reversed in the BIOS.

Since we’re on the topic, the primary actions of the F-keys include an external monitor shortcut, a wireless radio toggle, a power manager shortcut, brightness controls and the volume and playback controls, which are highlighted in orange. One final key acts as an eject button for the slot-loading DVD drive. Dell’s decision to configure the keys like this also means no more touch-sensitive buttons, which is no great loss.


Moving from the keyboard to the touchpad, it’s positioned off-centre so doesn’t interfere with typing. Dell also eschews the trend for irritating rocker-style buttons, with two individually sprung buttons doing the job nicely. However, one fashion Dell has indulged in is multi-touch support, though it doesn’t make much of it. Given the limited use for it right now, we can see why.

One minor issue we did find with the touchpad is that it got quite warm from time to time. This, we found, is because it sits directly above the wireless modules, which seem to produce some heat when active. Indeed, the system as a whole isn’t the coolest we’ve ever encountered, though neither is it excessively hot or noisy. We suspect this is due to the more powerful graphics processor, which is bound to kick out more heat than the integrated kind. As such this system is better suited to a desk than your lap, though short sessions shouldn’t be a problem.

As we noted earlier we were a little disappointed to discover this machine only has a 1,366 x 768 resolution display, though this is the norm in this form factor. On the whole it is decent display, even if it won’t win any awards. Its LED backlighting ensures it’s very bright, while colour production is vibrant without becoming oversaturated. However, viewing angles are merely okay – good enough when viewed from a distance, but when up close you’ll want to be right in front to get the best picture. 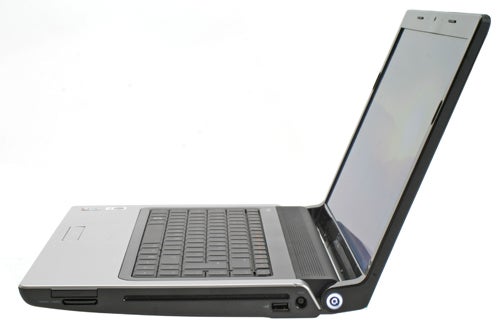 We were mightily impressed with the speakers on the Studio 1555, however. It’s a ‘2.1’ system, with two stereo speakers up top and a mid-range woofer underneath, which produces an impressively earthy and clear sound. Distortion does creep in when pushed really hard, but at sensible volumes music, films and games can be enjoyed without recourse to a set of headphones.


And you should be able to enjoy plenty of the above given the performance on offer. Looking at PCMark Vantage, there’s little this system shouldn’t be able to cope with, be it HD video encoding or RAW image editing. Were we being hyper critical it would have been nice to have the option for faster DDR3 RAM, but on the plus side every system comes with Vista 64-bit as standard, so all the RAM you have is being put to good use. We’d add that, given the next CPU choice down from the 2.4GHz P8600 is the 2.0GHz P7250, spending the extra £30 on the faster processor is a good idea – as you can see from the performance difference between the Dell and the Medion Akoya S5610. 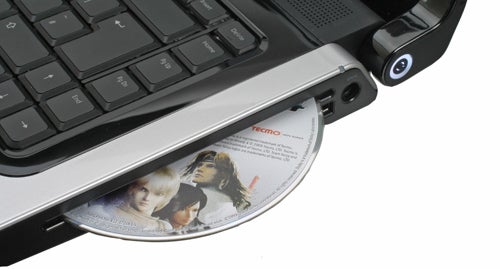 In gaming, meanwhile, the Studio 1555 doesn’t quite qualify as a fully-fledged gaming system, but it’s more than good enough for casual needs. In ”Trackmania Nations” we managed to push the settings to high detail with 4x anti-aliasing at the native resolution, while still maintaining a playable 32.2fps. ”Call of Duty 4” required a little more compromise, but at 1,024 x 768 with medium detail settings and 2x anti-aliasing it still looked good and the framerate was a playable 25-30fps.


Finally there’s the battery life, which is also pretty solid. Three hours and 56 minutes in the multi-tasking Productivity segment is a very strong result for a laptop of this size, so if you do need to take it out with you then it can handle it. Moreover, Dell has a nifty ‘no charge’ feature in its power management software, so you can use your laptop plugged-in and not degrade the battery as heavily. It’s not quite as sophisticated as Apple’s system on its MacBook Pros, but it’s better than no option at all. 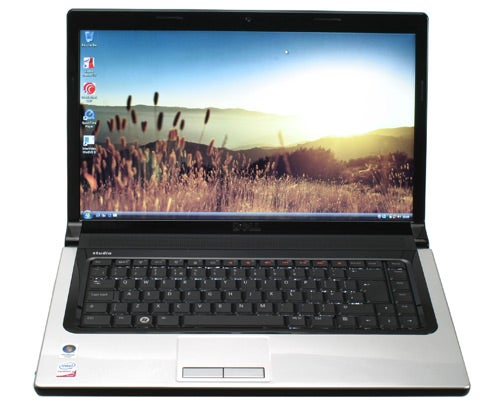 
If you’re after a flexible and powerful laptop for the home and occasional mobile use, the Studio 1555 is a very good option. It’s attractive, easy to use and can be configured more or less as you please. Discrete graphics options mean it’s also a reasonable gaming machine, while the backlit keyboard and Full HD display options will tantalise those with cash to burn.

In this configuration the Studio 1555 is a very quick machine. It has the performance to be a genuine desktop replacement, while also offering a modicum of gaming performance. Given the upgrade from a 2.0GHz Core 2 Duo to a 2.4GHz Core 2 Duo only costs £30 at the moment, it’s definitely worth the extra investment.

Just under four hours is a pretty good result. A nine-cell battery is available should you need more.

In this lower intensity test the Dell passes the four-hour mark. Thus, if you just need to read or write a document, you can do so for a long time between charges.

Just short of three hours at maximum brightness means even the longest films should be no problem. Reduce the brightness and you could be looking at three and half hours of playback time.