Dell’s Latitude range is a regular feature of any commute. Get on any morning commuter train and your bound to see Latitudes of all shapes, sizes and ages dealing with spreadsheets, email, documents and the like and probably the most common would be the 14.1in Latitude D630, or its predecessor the D620, both of which received a Recommended Award when we reviewed them. Whereas in the consumer space this form factor is largely being edged out, in the business sector it remains a particularly appealing compromise between performance, portability and usability. No surprise, then, to see Dell using its new 14.1in Latitude E6400 as the poster child of the new Latitude range.


In the past we’ve always praised ThinkPad’s, like the wonderful X300, for their timeless design and Dell has clearly tried to achieve a similar effect with the new Latitudes. It doesn’t quite manage this but unlike the D630, which was more of a refresh than anything else, the E6400 is part of a complete redesign of the Latitude range and though naturally it retains the professional appearance of previous Latitude’s, it brings with it a level of sleekness and style that’s previously been missing. 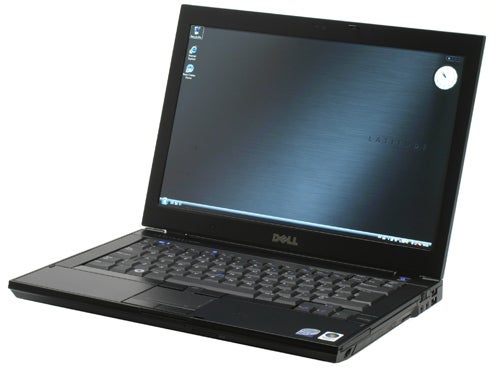 This is achieved through a combination of some strong angular lines and a classy magnesium alloy construction that’s most evident in the brushed metal lid. It’s not complicated but it does work and it helps that the E6400 is fairly light and slim for its size. At its thickest it measures 31mm and with the standard six-cell battery it weighs 2.3kg, making for a fairly portable weight that’s 100g or so lighter than the D630 it’s replacing. Plus, for the adventurous, Dell is even selling coloured lids for Latitude’s too, though we can’t see many companies being interested in this! 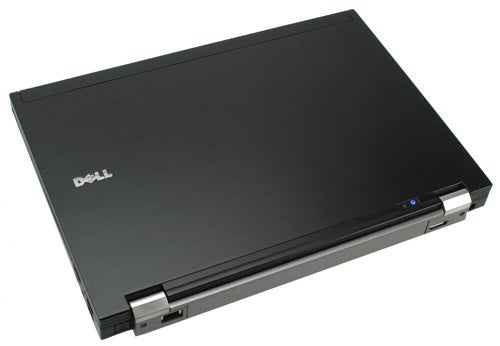 So far, so good, but the magnesium alloy construction isn’t just about making the E6400 look good, it’s primarily about strength and here Dell scores another win. Almost every element of the E6400 looks and feels very sturdy and particular praise must be directed toward the hinge. It’s very strong and stiff, so bumpy journeys shouldn’t be a problem, while the machine is evenly balanced so the front doesn’t lift up when opening the lid and/or adjusting the screen angle – something that’s a regular annoyance on consumer laptops. There’s also a reassuringly secure lid clasp on the front, so you needn’t worry about your laptop popping open when inside a bag.


This sense of quality is continued in the keyboard. As ever with Dell, the basic layout of the keyboard is excellent. There’s a large and very usable Shift key on the right, below which sits offset cursor keys, while the Insert, Delete, Home, End, Page Up and Page Down keys are all grouped in a grid in the top right. Everything is more or less exactly where you’d expect and want it to be, the only exception being the omission of the ‘Menu’ key normally found on the bottom row. It’s hardly a deal breaker, though, especially if it allows everything else to be just right. 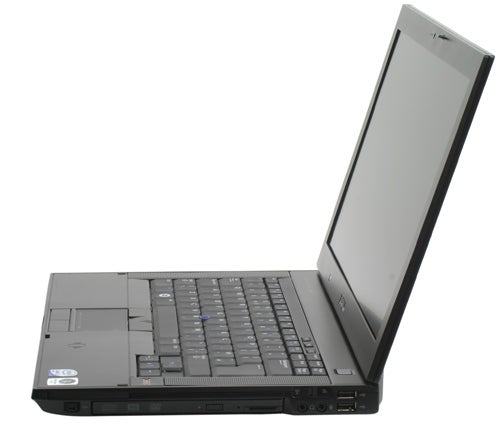 This layout prowess is coupled with, without doubt, the best feeling Dell keyboard we’ve ever come across. Keys are tactile, well proportioned, firm and responsive and you have to press extremely hard to garner even a tiny amount of flex. It still lacks the supreme quality found in ThinkPad keyboards, but other than that it’s hard to find any fault whatsoever.

As with previous Latitude’s you also have the option to use either a trackpoint or a touchpad and like the keyboard, both are excellent. Indeed, the trackpoint in particular has seen a bit of an upgrade thanks to a slightly concave shape as opposed to the convex “nipple” trackpoints of previous models. Its three buttons, the middle one being for scrolling, are nice and firm and hinged well to make them easy to use. Likewise the touchpad’s buttons have a pleasingly crisp mechanism and the touchpad itself is smooth, well proportioned and features both vertical and horizontal scroll zones. 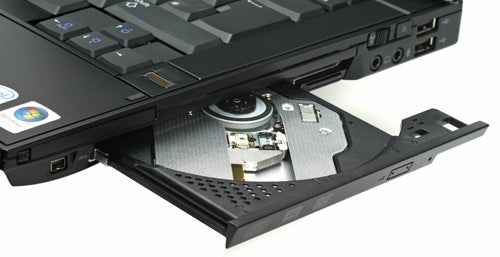 Things only get better when you look at the screen. Standard configurations feature a regular 1,280 x 800 display but, if your budget stretches far enough, the 1,440 x 900 LED backlit panel we have here is worth serious consideration. Not only is the desktop acreage vastly superior, the screen itself is very sharp, bright and has decent horizontal viewing angles. This makes it very comfortable to use for prolonged periods and needless to say it also features an anti-glare, not glossy, finish so reflections aren’t an issue.

Dell hasn’t skimped on the security options, either. Like pretty much any business notebook worth its salt, there’s a Trusted Platform Module (TPM) for secure encryption and authentication and in the E6400 you get both a Smart Card reader on the side and a “contactless” RFID Smart Card reader (ala Oyster Card) just to the right of the touch pad. You can also specify a fingerprint reader, though this is an optional extra. All this is ably managed by Dell’s ControlPoint software, which makes it relatively painless to manage boot, hard drive and Windows passwords as well fingerprints and all the other security functions available. 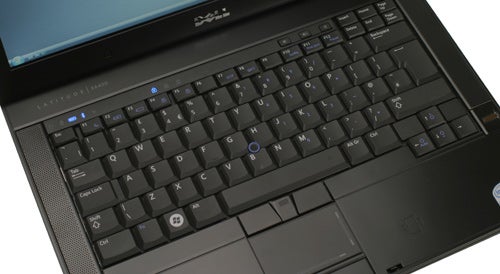 Indeed, ControlPoint is a surprisingly well put together piece of software. Among its duties include power management and unlike similar manufacturer applications that simply replicate native Windows functionality, ControlPoint throws in some features of its own.

These include a handy ‘Extended Battery Life’ mode that enables a number of effective battery saving elements. These include: disabling Aero, reducing colour depth to 16-bit, reducing display refresh rate to 40Hz, turning off all security devices and disabling both your optical drive and the FireWire port. This mode also enables the integrated ambient light sensor, thus adapting screen brightness according to available light.

It’s these kinds of touches that obviously separate this from your ordinary consumer notebook, though the E6400 does still feature some consumerist touches. There are, for instance, dedicated volume control buttons just above the keyboard, including a mute button, and stereo speakers, though they’re predictably abject. There’s also the option for a webcam making video conferencing a possibility.

Connectivity is predictably very good. Starting on the left there’s a Kensington lock slot and this is followed by a D-SUB (VGA) video output and two USB ports, one of which doubles as an e-SATA port. Closer to the front is the Smart Card reader while on the front edge, just to the right of the lid clasp, is a 5-in-1 memory card reader with support for SD, MMC, Memory Stick, Memory Stick Pro and xD card formats.

On the right there are a further two USB ports. These are, like the other ones, placed one above the other so you might find that large USB devices block one of the ports during use. Next to these are headphone and microphone ports and above these sit a hardware wireless radio switch and a Dell regular, the Wi-Fi Catcher button. Both of these are good to have, though truth be told we’ve yet to find a time when the Wi-Fi Catcher feature on a Dell laptop was that useful. On the other side of the optical drive is the 54mm ExpressCard slot and below this is a mini-FireWire port. 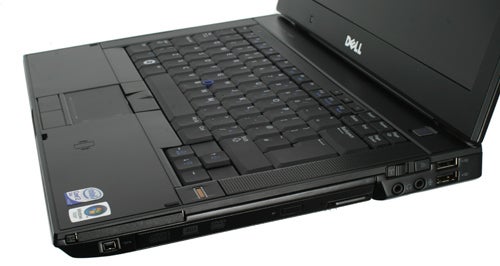 As you might expect on a business laptop, the Ethernet port and power input can be found on the back and these are also joined by a DisplayPort connection. This can be viewed in one of two ways. Either it’s a rather prescient addition that should ensure future-proofing, or it’s there to help ensure DisplayPort, a technology Dell is backing extensively, is eventually adopted by companies. If you’re a cynic you’d say the latter and wonder why a DVI port isn’t there instead, but given the size of a DVI port and the difficulty in integrating one, DisplayPort is a sensible addition. Finally, on the bottom, is a docking port and Dell also continues to put a battery meter on its battery packs, something that in our opinion all notebooks should have. Unlike a lot of batteries, we also found the release mechanism on the E6400 very easy to operate so switching batteries is pretty painless.

Hard drive options are copious. You can get normal 5,400rpm SATA HDDs in 80GB, 120GB and 160GB capacities as well as 80GB and 120GB capacities that come pre-encrypted. You can also get 7,200rpm drives ranging from 80GB all the way up to 250GB and all with Free Fall Sensors, though as yet there are no SSD options to choose from. In addition to all this, you can specify custom hard drive partitioning. As standard you get integrated Intel GMA X4500HD graphics, but discrete nVidia Quadro 160M graphics with 256MB of memory is available as well. You can also choose whether to have ExpressCard slots or PC Card slots, which is handy if you use legacy PC Card devices such as HSDPA modems.

Of course you could have this functionality integrated and if you do so you’ll get HSDPA capable of 7.2Mbps, the fastest speed currently available. As for Wi-Fi you can select either Dell’s own wireless modules, including either 802.11b/g or Draft N, or Intel’s own Wireless-N capable modules. Wired Ethernet is, of course, of the Gigabit variety. All systems come with a three year basic warranty, as opposed to the one year you’d normally get on a consumer notebook and this obviously contributes to the higher than normal price.

For testing our system came supplied with the entry-level processor, the 2.26GHz P8400, with support from 2GBs of RAM, a 160GB 5,400rpm hard drive and integrated graphics. As standard all systems come with a six-cell 55Whr battery and this was what was used for testing. Other options include a nine-cell 85WHr battery, which combined with an optional 12-cell “battery slice” that sits under the machine, is the source of the much publicised 19 hour battery life claim Dell used in its launch headline. 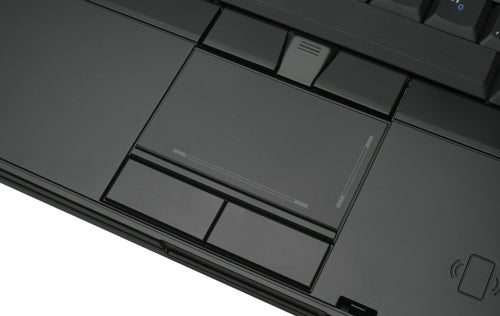 We, of course, couldn’t be less interested in such headline grabbing claims but nonetheless the E6400 delivers very impressive results in MobileMark 2007 battery tests. In the multitasking Productivity suite it managed four hours and 45 minutes, around 15 minutes more than both the Samsung Q210 and Dell Vostro 1310. In the lower intensity Reader test this increased to over five hours, clocking up a super five hours and 35 minutes. DVD playback meanwhile, with screen brightness at maximum, was a still impressive two hours and 37 minutes.

Suffice to say, then, battery life is very good indeed and would no doubt be better when using Dell’s extended battery mode, something we unfortunately didn’t have the time to test. Application performance was also perfectly acceptable. Our system came loaded with 64-bit Vista Business, which accounts for some differences in PCMark Vantage over similarly specified systems, but nonetheless our in-house testing (run using a 32-bit install) show the E6400 performs perfectly well. Indeed, unless you have some special need, the “entry-level” processor should prove more than adequate for 90 per cent of a company’s workforce. 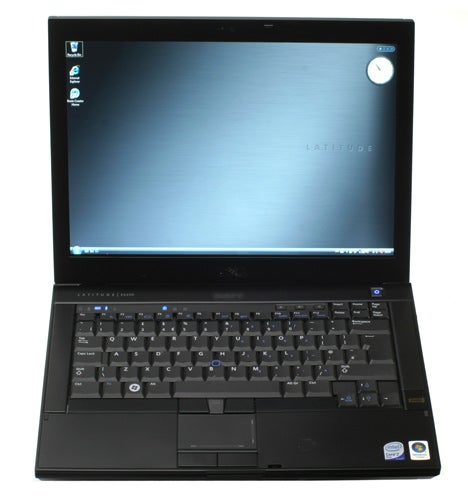 A powerful, flexible, sturdy and well designed portable all-rounder, the Dell Latitude E6400’s design and functionality caters very well to the needs of a wide range of users, be they relatively undemanding users who want something practical and long lasting, to power users that need to multitask extensively while on the move. Throw in a pleasing but serious aesthetic design and it becomes very easy to recommend.