More than other sectors in the notebook market, ultra-portables are horses for courses choices. Because of their size and weight it’s inevitable that compromises must be made somewhere and even when they aren’t, as with the Sony VAIO TT, the cost could be deemed prohibitive depending on your standpoint.


Not that there are any cheap ultra-portables, with today’s candidate, the Dell Latitude E4200, being no different. This is the minnow of the Latitude range that saw a promising start in the shape of the E6400 — the all singing, all dancing, all-rounder of the Latitude range. Moreover, the E4200 is replacing the well regarded Latitude D430, a staple of many a company’s corporate IT department, so expectations were high when it landed in the office.


And, to a greater extent, those expectations were met when we first unfurled the machine from its ridiculously large box. Measuring 291mm across, 204mm deep and just 19.95mm thick, the E4200 eschews the wedge shaped chassis design so popular of late for a more slab-like appearance. Not that this should be construed as a criticism; the E4200 is every bit as slim and sleek as any other ultra-portable and given it weighs just 1.205kg with its six-cell battery and 1.0kg with the four-cell. In terms of weight, only the Toshiba Portégé R600 can best it. 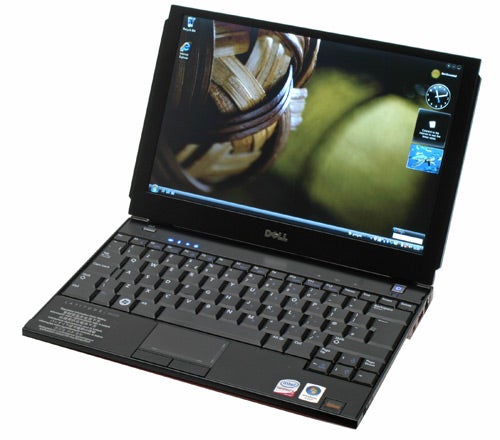 Unlike the admittedly much improved R600, however, the E4200 doesn’t sacrifice anything in terms of build quality to reach this weight, retaining the same solid feel as its larger cousin, the E6400. In fact, thanks in part to its compact size, the E4200 arguably feels more solid, with no element apart from the predictably flexible screen garnering a negative reaction. Moreover, given that the E4200 is only available with an SSD, you needn’t worry about shock-protected hard drives anymore — that’s all taken care of.


It’s an attractive machine, too. We’ve got the red version here (other colours include blue, pink and the standard brushed metal black) and while we weren’t taken by this immediately, the more time we spent with the E4200, the more we’ve grown to like it. No doubt the majority of companies will be opting for the black, but more individualistic executives or regular consumers that fancy something a little more eye-catching will welcome the choice even if it adds £29.00 onto the price. 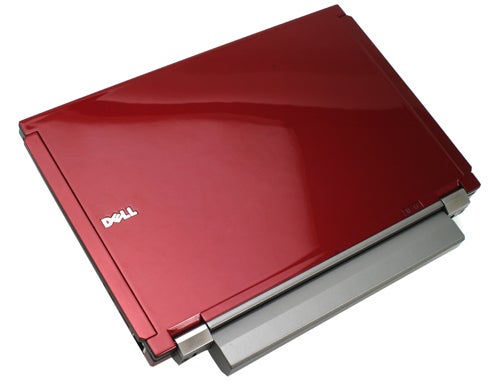 Aside from the colour choices, the basic design continues the angular and functional appearance of the Latitude family. It’s a look that works very well for its intended audience, exuding a professional appearance but a little style, too. It’s worth noting, though, that the six-cell battery sticks a fair way out of the back of the machine. This takes a little getting used to, but doesn’t affect the appearance of the E4200 too adversely and proves handy as a handle to aid usage when standing up.

So the E4200 is light, thin and well made, but while it doesn’t sacrifice solidity for its compact look and feel, like the D430 before it, it doesn’t come with an integrated optical drive. Instead you can choose between a Media Base, which is a docking station style attachment that sits underneath the machine, and an External Media Bay — ostensibly just a USB optical drive. 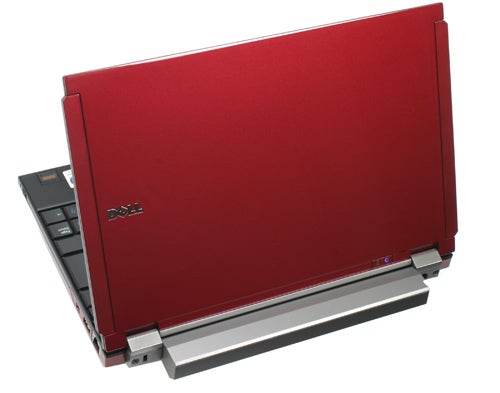 Unfortunately, both of these options are excruciatingly expensive, costing £227 and £122 respectively. Fundamentally, if you think you need the Media Base then you’re probably better off looking at something else that has an optical drive, while if you want an external drive you should buy one from elsewhere and not from Dell itself. Another missing option is that of a webcam, something that’s made impossible by the admittedly very attractive thin bezel at the top of the screen. 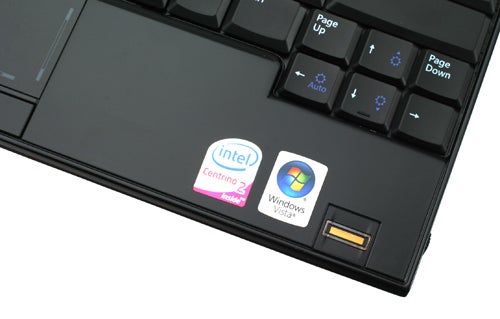 If one were looking for savings, downgrading the Ultra Performance Samsung SSD for the standard drive saves a whopping £243, while omitting HSDPA saves a further £81 — an option if you have a USB modem or simply don’t need it. These two measures alone bring the price down to £1,360.45 inc. VAT and other savings could be made if required.


One thing you can’t change, however, is the 12.1in, 1,280 x 800 display. As with all notebooks this size it’s an LED backlit effort and is suitably sharp, bright and legible in bright light thanks to the anti-glare finish. It’s a shame there’s no option for a higher resolution, but we’ve yet to see a 12.1in that offers this and all told it garners little complaint. In addition, the E4200 comes equipped with an ambient light sensor, so the screen will automatically adjust the brightness to suit the ambient conditions, saving battery life in the process.

Another battery saving feature is the ‘Extended Battery Life’ mode that’s part of Dell’s ControlPoint software. This powers down all security devices, the FireWire and ExpressCard devices, enables Windows’ Power Saving mode, reduces the screen colour depth to 16-bit and reduces the refresh rate to 40Hz. All of which should provide around eight hours of low intensity usage, though it’s annoying that there’s no shortcut for this mode — you must enter the ControlPoint software and navigate a couple of menus first.

Taking a look around the machine, Dell has managed to squeeze on most of the connectivity a business user is likely to need when on the move. On the left you’ll find a VGA output, a combined eSATA and USB port, the headphone and microphone jacks, a 34mm ExpressCard slot and below this a SmartCard reader that provides secure authentication along with the TPM — as does the optional fingerprint reader on the main body of the machine.

Then, on the right, there’s the Ethernet port, the second USB port, a mini-FireWire, a memory card reader and a wireless radio switch. A power input and lock slot can be found on the back, either side of the battery, while there’s a docking port on the bottom for extending this connectivity at the office. Other nice touches include a battery meter on the battery, the small 45W power supply and the fact that the second USB port is powered, so can charge devices even if the notebook itself is powered down.

One area where the E6400 particularly impressed was the keyboard and given the Latitude range has commonality in this respect, the E4200 is also very impressive. Keys have a wonderful tactile feel to them, respond crisply and evenly and flex is barely detectable. No complaint can be made of the layout either with every element logically positioned, including slightly withdrawn cursor keys that are flanked by Page Up and Page Down keys.


Unlike the ThinkPads of this world, the E4200 doesn’t have both a trackpoint and touchpad, settling for just the latter. It works just fine, being smooth, well proportioned and serviced by two responsive buttons. 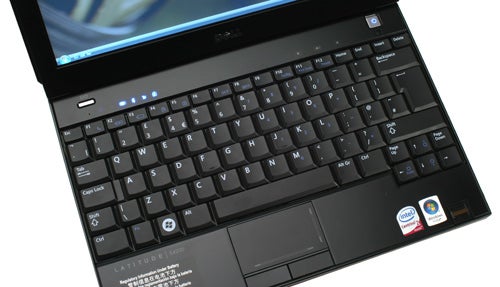 One thing the E4200 does have, however, is an instant-on secondary OS — something Dell is calling the Latitude ON Reader. This uses a separate Linux sub-system, powered by an ARM processor and flash memory, and gives you access to web browsing, email, calendar, contacts, instant messaging and document viewing. Provided you don’t boot into Windows this could potentially offer days, rather than hours, of usage on a single charge.

Much to our irritation, though, our sample (due to its older configuration) doesn’t feature it, so we aren’t able to give you a full rundown. But, from our time using the ON Reader in the past, it’s without doubt a very useful feature for anyone accessing basic functionality on the move — that’ll be most people. Indeed, this alone could tempt many, so it’s well worth the relatively minor premium it demands.

Another interesting new feature of the Latitude range is the remote Tracking & Recovery service. It’s an added extra, starting at £15 for one year’s Tracking & Recovery and £20 for the Remote Data Deletion option, but if you’re concerned about theft (which with a notebook like this you should be) it could prove invaluable. This is made possible by a software agent and BIOS embedded persistence module, both of which can survive OS re-installation, hard drive re-formatting and even hard drive replacement.


When reported stolen the laptop will report its location when connected to the Internet and if you choose the remote deletion option, you can instruct sensitive data on the machine to be deleted remotely. In addition, in systems with GPS fitted (this is integrated into the HSDPA module on E4200) the service gives you even more accurate location data, also making it possible to track a unit’s movements within a company. 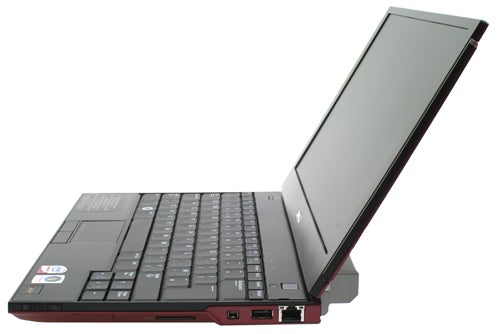 Thanks partly to the very fast SSD, the E4200 performed well in all of our benchmarks — giving the similarly priced Sony VAIO TT11MN a good thrashing and comfortably besting the Toshiba Portégé R600 and its slower SSD. Its speed is particularly well demonstrated in our in-house batch image editing test, where the E4200 proved over 30 per cent faster than the Sony and just under 15 per cent faster than the Toshiba. In real-world use this speed ensures exceedingly snappy general operation when opening files, programs and brisk boot-up and shutdown times.


Battery life is also very good. It might not quite match the VAIO TT, but the E4200 managed a creditable four and a quarter hours in the Productivity segment of MobileMark 2007 and an excellent five hours and 26 minutes in the Reader test. If you opt for the four-cell battery, or purchase both, you can expect more or less exactly half these figures when using it. And, of course, when using the Latitude ON Reader you can enjoy more battery life than you’re ever likely to need, too.


These impressive results are the cherry on top of a generally very impressive cake. Granted, if you do need an integrated optical drive (or a webcam) you’ll have to look elsewhere, but this is becoming less of a necessity these days and in every other respect the E4200 delivers everything a business ultra-portable needs. It’s light and portable, sturdy and durable, is easy to use and has all the security features a road warrior needs to keep their data secure. Throw in some nice extras, such as the instant-on Linux OS, remote security options, the small 45W power supply and the powered USB port, and the E4200 is a worthy successor to the D430.


So long as you don’t need an optical drive, the E4200 is an ideal option for the serious businessperson on the move.