Competition is fierce, very fierce. Dell may have held onto its second position in the notebook market; however Q4 represented the weakest period for the company with a slight drop in sales compared to its major rival, Hewlett-Packard. More recently Dell has struggled with production on its new Inspiron and XPS M1330 models and, though generally competent, the new Inspiron proved to be somewhat underwhelming compared to the likes of Acer’s Aspire 5920.


However, though the company’s efforts in the consumer space have borne mixed results, its corporate focussed Latitude range, continues to impress. One particular favourite is the Latitude D630, the 14.1in Intel based system that walked away with a well deserved Recommended Award back in July. Currently residing in the labs is the D430, the ultra-portable of the Latitude range and one that looks to be very promising indeed. Today, however, I’m looking at another Latitude, the AMD powered D531. 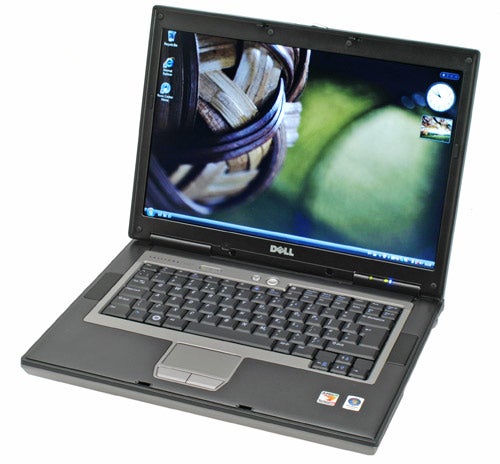 As has become traditional of late, AMD systems of any flavour tend to be targeted at the lower end of the market. This is a reflection on AMD’s notebook platform, which is inherently inferior to Intel’s in almost every way; be it in raw performance or less tangible but vital areas such as battery life.


Before I get on that however, let’s take a close look at the D531’s chassis. It’s built around a 15.4in display and though there’s an option for a 1,440 x 900 panel, our sample came with the cheaper 1,280 x 800 variety. This shouldn’t come as much of a surprise since, as I noted in the Student’s Guide to Technology, 15.4in displays are cheap to make and as such are used in the vast majority of budget notebooks. 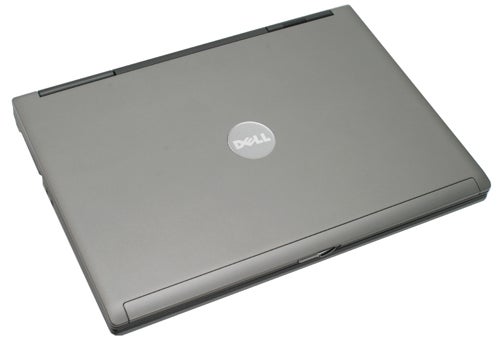 As you might expect for a business orientated notebook, there isn’t a great deal you can say about how the D531 looks. It’s finished in varying shades or dark grey and light grey and, for the most part, is pretty inoffensive. For a 15.4in notebook it isn’t the bulkiest either, measuring 360 x 262 x 36mm (WxDxH) and weighing just over 2.7kg with a standard six-cell battery. Fine, this still isn’t small or light enough for mobile working, but it’s not as bad as some by quite a margin.


Overall the design sticks with many of themes common throughout the Latitude range, and it’s certainly well put together. A good example of this sturdiness is the display, which is well protected to prevent damage to the panel from outside pressure. Similarly there’s none of the cheap thin plastic as found on the NEC Versa S970, and the system as whole should be able to withstand minor drops and knocks without too much difficulty.

On the inside the system is powered by an AMD Turion 64 X2 TL-60, which is the top-of-the-range option for the D531 series. It tops out at a steady 2.0GHz, but there’s only 1MB L2 Cache compared to the 2MB or 4MB found on Intel’s counterparts. This is supported by 2GB 667MHz DDR2, while graphics are provided by ATI’s Radeon 1270, which shares some of the system memory for its limited graphical duties.


Behind this core of components there’s a 120GB 5400rpm SATA HDD, an 8x DVD+/-RW optical drive and plenty of network connectivity thanks to Gigabit Ethernet, Draft-N wireless and Bluetooth 2.0 EDR. The presence of Draft-N wireless is especially important considering recent rumblings suggesting that, in the coming years, 802.11n Wi-Fi will be good enough and prevalent enough to replace wired Ethernet completely. If anything this seems a little premature but, nonetheless, its presence will only enhance the longevity of the machine. 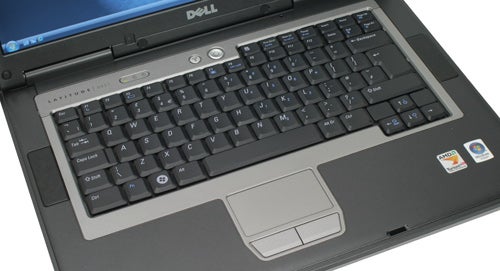 In total this entire configuration will set you back £697.95 inc. VAT before delivery, and this includes the standard six-cell battery and Vista Business Edition. Coming in at just under £700 it’s certainly an attractively priced option – lower than NEC’s budget Intel option, the Versa S970. In many ways these two systems provide quite an interesting comparison; with NEC’s machine opting for faster and more expensive Intel parts at the expense of build quality, while Dell’s offering uses slower and cheaper components but a classier chassis.


This extra level of refinement is fairly evident in many aspects, but especially in the keyboard and display. Starting with the keyboard, the D531 sticks with the same basic layout that’s featured on the D630, and the D620 before it, which is no bad thing. It’s a great layout, matching a decent size Return key with other nice touches such as slightly recessed cursor keys and an extra row of keys to house some of the superfluous keys that often get in the way on more cramped notebooks. 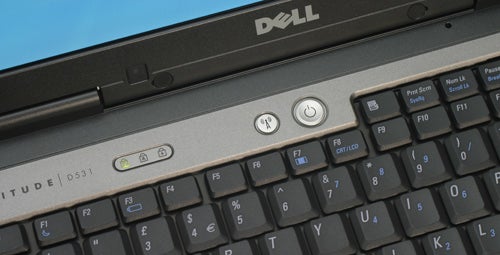 As such it’s a pretty nice match for any standard desktop keyboard and it’s clear that this is what Dell was gunning for. Nowhere is this more apparent than in the keys themselves, which sport a significant amount of travel for a notebook keyboard. If I’m being honest I’m not totally sold on this, though for the sort of users who will be using the D531 it’s probably ideal.


Likewise the display, although by no means wonderful, is perfectly suited to its usage. It’s bright enough to be used in normal office environments, and doesn’t feature a reflective glossy finish which could prove distracting. Viewing angles are nothing special but serviceable and overall it’s very pleasant to work on day to day, which is all one can really ask. If we’re being finicky, it would be nice to see a higher resolution display as standard, but Dell is hardly alone in using 1,280 x 800 for budget machines and that’s not likely to change any time soon.

Connectivity wise it’s all pretty standard fare here, with the D531 catering for the majority of needs without too many exceptions. The only obvious absentee is a card reader, which has almost certainly been omitted for cost saving reasons.


On the left edge there’s a four-pin FireWire port, with Headphone and Microphone ports rounding off the audio connectivity. Just below these is a PC Card slot, which provides card based expandability for such things as HSDPA, which is an optional extra as either a PC Card device or as an embedded module. Obviously, though, these both come at fairly significant premiums and arguably this notebook isn’t portable enough to justify such expense.

Most connectivity is, however, located on the back of the machine; with all the usual suspects in attendance. There are Ethernet and Modem jacks, two USB ports, S-Video out, D-Sub and, for a little legacy support, a Serial port too. On the right there are another two USB ports, bringing the total to four, with the rest of the space taken up by the optical drive.

In software the D531 actually comes pleasingly devoid of pointless programs. There’s Roxio Creator software for DVD/CD authoring and Power DVD DX for movie playback, while Dell’s own Support and QuickSet software makes an appearance too.

The only other notable inclusion is the Wave Systems’ Embassy Security Center, which is included as standard on all Latitude models. This helps manage login and password security on Dell Latitude systems, though in this case it is somewhat redundant since the D531 doesn’t have a Trusted Platform Module, which is required for the majority of the software functionality.

For performance testing our usual set of benchmarks were run on the D531, which include PC Mark 05, our own in-house Virtual Dub and Photoshop Elements tests and two subjective battery tests – one for light usage and one for multimedia playback.


Overall the tests highlighted more or less what we already knew, that the AMD mobile platform is markedly inferior to Intel’s. PC Mark quickly demonstrated this, with the D531 trailing both the NEC Versa S970 and Dell Latitude D630 by significant margins. 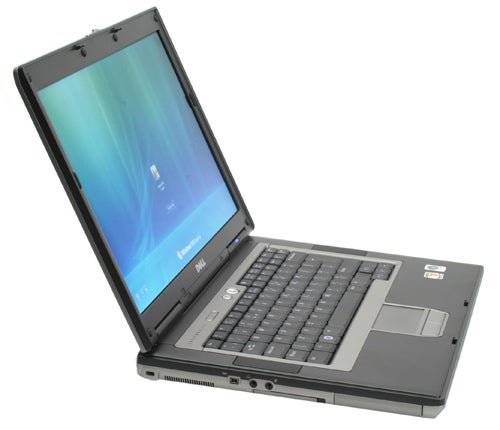 Our in-house tests, however, provide an even more compelling example of exactly how large that gap really is. In the Virtual Dub test the D531 took nearly two and half minutes longer to complete, and in the Photoshop Elements test the gap was even more marked with the D531 taking just over seven minutes longer to complete. By anyone’s estimations that’s a pretty poor return, and shows just how much work AMD has to do in this area.


In general use this difference may not be immediately apparent, especially while running only a small number programs concurrently, but beyond three or so programs the system does become noticeable sluggish. This could certainly become a problem when you might be running Outlook, Word, Excel and a web browser on top of whatever propriety software your company may employ – this would count as fairly typical usage in an office environment. 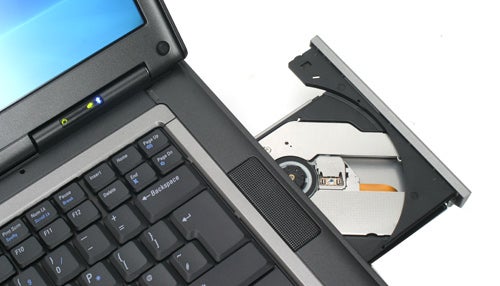 Battery life tests were similarly disappointing. In light usage testing , which consisted of word processing and web browsing over wireless with screen brightness set to its maximum, the D531 managed a fairly average two hours and 45 minutes. Playing an hour and a half long DVD also provided food for thought, with the D531 only just managing to reach the end of the film before duly capitulating.


Clearly then, you do pay a significant price for the savings gained by using an AMD powered notebook, and this does put serious dents in the D531 credentials. Unlike NEC’s Versa, however, it at least doesn’t feel as cheap as it is and this goes some way to redeeming its sluggish performance. If anything, though, one could opt for an older Intel system at a similar spec and still get superior performance, which regrettably says a great deal about AMD’s failings in the notebook arena. 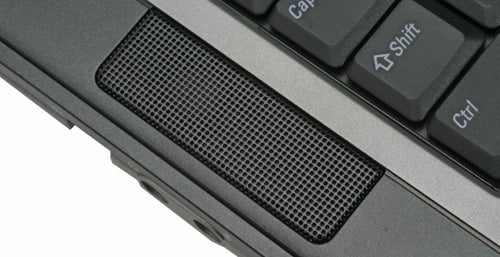 
Dell’s Latitude D531 is a solidly made and well targeted machine, however it’s let down by the sluggishness of AMD’s mobile platform and, as a consequence, it would be well worth scouting the market thoroughly before settling on this system.