Despite the prevailing opinion that Dell’s reliance on direct selling is a weakness, it remains one of the largest and most recognised brands in computing. It’s a fact that cannot easily be ignored or underestimated and, though its colourful new Inspiron range drew a muted reaction, its Latitude range of corporate notebooks is in rather better shape. Clarity and consistency in design has helped it develop an enviable pedigree over the years, with the D630 proving a particular success. Today I’m looking at another member of the Latitude family, the D430, which is the ultra-portable of the range. 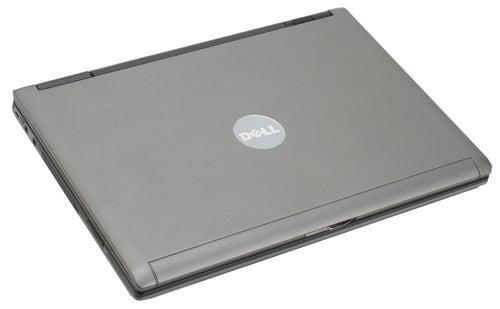 The attributes of an ultra-portable are well documented, but they’re worth reiterating for the uninitiated. Typically they weigh below 1.5kg, making them uniquely portable. They’re also slim and some, like Sony’s TZ Series, can be breathtakingly good looking. A good ultra-portable should boast exceptional battery life and this, rather than raw speed, is the most important consideration in judging an ultra-portable’s overall performance.


Much of this battery performance can be attributed to the Ultra-Low Voltage (ULV) CPUs, which are designed to reduce power usage and heat output. Currently there are two dual core ULV CPU options, the Intel Core 2 Duo U7500 and U7600, which have 1.06GHz and 1.2GHz clock speeds respectively and share the same 533MHz front-side bus and 2MB L2 Cache. Our sample version represents more or less the highest possible specification of the D430, using the faster U7600 and benefitting from a number or market leading features. 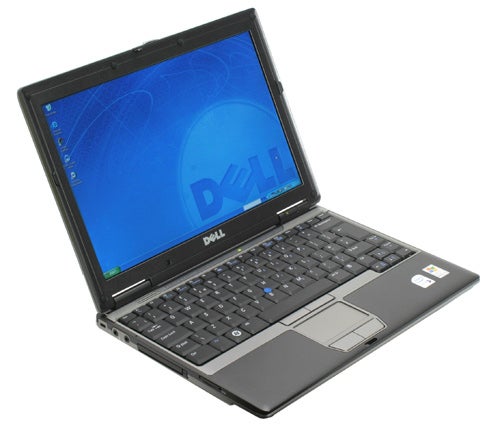 Primary among these is the inclusion of a SanDisk 32GB Solid State Drive (SSD), which helps improve battery life due to the complete lack of moving parts. Naturally, it also means you get less disk space, but for business use the 20GB of free space after Windows XP installation is more than enough. Indeed, if you specify an SSD then you’re better off going with XP since it doesn’t take up as much space on the drive.


In support of the U7600 CPU, our sample came equipped with 2GB 533MHz DDR2, which is configured as 1GB wired to the motherboard and one further 1GB stick. Graphics obviously isn’t a high priority, with the integrated Intel GMA950 providing just enough power to run the Aeroglass in Vista but nothing more than that. 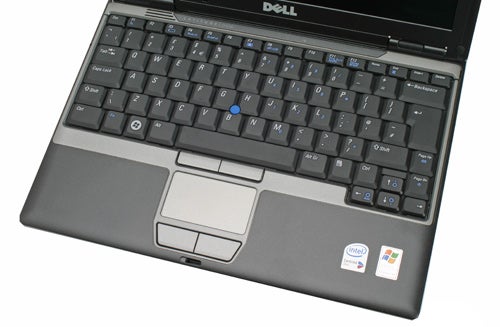 A higher priority is network connectivity, and Dell doesn’t disappoint. Our sample came with Draft N wireless, Gigabit Ethernet and embedded HSDPA, which is everything you’re ever going to need. As ever there’s 56k modem as well if you’re desperate, while Bluetooth 2.0 EDR rounds off the wireless options. Of all these things, clearly HSDPA is the key attraction and makes the D430 a proper mobile system.

One thing the D430 does lack, however, is an integrated optical drive. Instead, you get an external 8x DVD+/-RW drive, while you can also opt for a MediaBase dock that includes either this or a DVD and CD-RW combo drive. Our sample came with a MediaBase and a DVD+/-RW drive, which inflates the price by healthy £238. You do get some extra connectivity, including a DVI port and legacy connections, but unless you really need these things then it’s best to avoid this option. 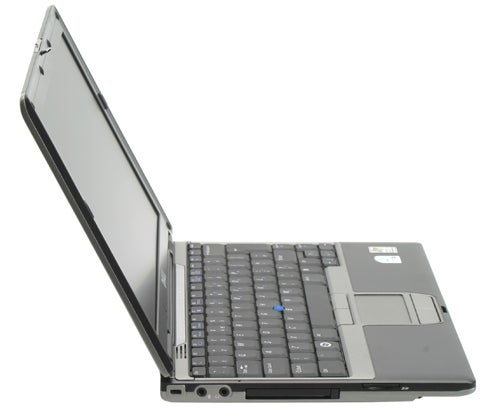 As to whether the lack of a built-in drive is a weakness, it would have to be a qualified, yes. Though many may find they don’t use an optical drive all that often, especially when out and about, inevitably there are moments when you’re caught out, having either decided not to take the external drive with you, or simply forgotten. As ever, it’s a judgement call. It’s not a fatal problem, but some will find more fault with it than others and it’s an important consideration for anyone who’s thinking of investing in the D430.


Moving away from the technical details, Dell has been careful to remain relatively consistent in the design of its Latitude range. As such, if you’ve seen or used previous iterations such as D410 or D420, this D430 will be instantly recognisable. There’s the same combination of silver and charcoal grey, and elements such as keyboard layout have remained much the same. Still, this isn’t to say Dell hasn’t been improving the design over time, adding plenty of features and neat touches that make using its machine as painless as possible. 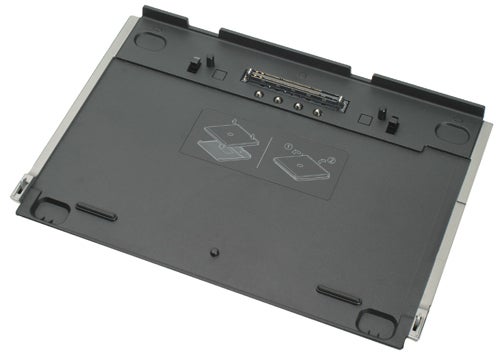 That keyboard is a good case in point. It’s intelligently arranged, with a proper size Return key and offset cursor keys to keep them out the way, while keys are weighty yet responsive. Having the Page Up/Down keys to the right of the Shift key did prove slightly awkward when typing, though they’re well placed for scrolling through documents and overall the keyboard is great to use. Another useful day-to-day feature is the combination of both a touch point and touch pad, the former allowing you to control your cursor without moving your hands away from the keyboard.


It’s not just these things that make the D430 great to use though; there are all sorts of small details that make it a great notebook to use. Items such as the secure screen clasp and the wrist rest on the extended battery are tidy additions, inspiring a sense of ruggedness and quality that’s only reinforced by the magnesium outer casing, which prevents any flex and protects the screen from external pressure. 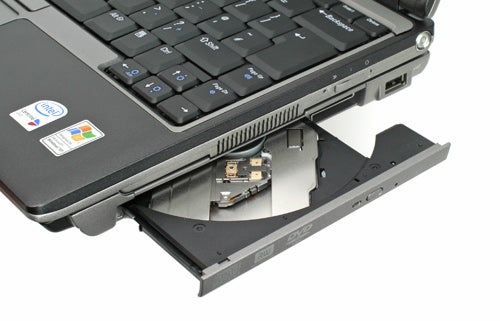 There’s also the ambient light sensor that automatically adjusts the display backlight to suit the ambient light, while the display itself is perfectly suited for working on the move with a non reflective finish and great brightness levels. It’s all these design elements that make the D430 a genuinely intuitive and reliable work companion, one which rarely gets more than slightly warm and runs near silent 90 per cent of the time.

In terms of size the D430 isn’t necessarily the slimmest or lightest ultra-portable, but this isn’t to its detriment because it’s still very portable and it’s sturdier than many other notebooks in this class. With the standard 6-cell battery it weighs 1.49kg, while inserting the provided 9-cell battery increases this to 1.68kg – still well under 2kg. This is pretty significant, since you can use the extended battery and still not feel too burdened by weight.

Given the size the D430 isn’t as endowed with connectivity as some, but Dell has done a decent enough job squeezing all the most important things onto the diminutive chassis. Starting on the left edge, there’s a lock slot followed by Microphone and Headphone jacks. Next to them is the PC Card slot, while a 5-in-1 Card Reader (SD, MMC, Memory Stick, Memory Stick Pro and xD) sits nearest to the front.

You may also be able notice a small gap underneath the PC Card slot, which is reserved for a Smart Card. This provides authentication for the integrated Trusted Platform Module (TPM), which encrypts sensitive data and ensures your system can’t be accessed without the provided card – presuming you’ve set this feature active.

Since there’s no optical drive, the right edge is rather sparsely populated with features such as USB ports and the like being reserved for the back of the machine. As such, the only things worth noting here is the Wi-Fi Catcher and On/Off switch and Power button.

Finally, on the back, you’ll find most of the ports and connections you’re likely to use on a daily basis. First there are the Ethernet and Modem ports; these are followed by two well spaced USB ports and a D-Sub port. Next is another USB port, which is slightly different from the other two because it’s a “powered” port with an extra connector just above it for powering the external optical drive bay. Finishing things off there’s a 4-pin FireWire port, with the DC-in tucked away in the corner.

For performance testing we ran our usual set of tests, including PC Mark 05 and our in-house Photoshop Elements and Virtual Dub tests. Since the D430 came loaded with Windows XP, we also ran the MobileMark 2005 and compared the battery results against its predecessor, the D420. 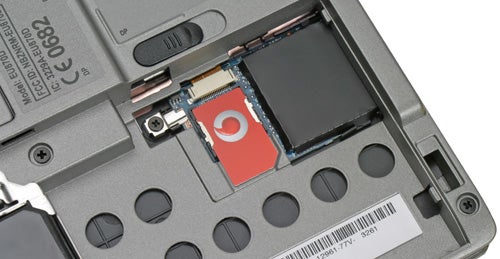 Starting with raw performance, it’s clear that the recent update to Intel’s dual-core ULV processors has had a significant impact, with PC Mark scores for the D430 significantly better than those of the D420 in all but the Graphics test. Of particular note were the results in the HDD test, where the fast access times of the SSD were plain to see in the much higher score. Moreover, it’s these fast access times that make using an ultra-portable slightly more bearable since they do provide an extra level of ‘snappiness’ in general use.


Battery testing was conducted using both normal and extended batteries, and results showed there has been some improvement over the D420. With the standard 6-cell battery the D430 managed 209 minutes, just over 10 minutes more than the D420. This is an excellent result, showing that even with the extended battery you should get close to four hours battery life. 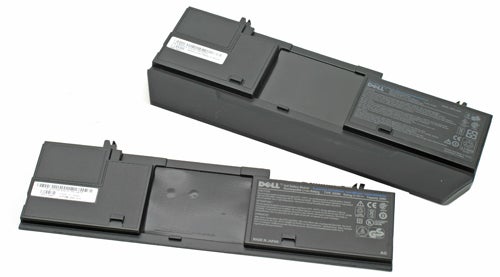 Predictably, the extended battery proved even more impressive reaching 409 minutes, or six hours and 49 minutes, which is close to 30 minutes longer than the D420 managed. This is a great result and on a recent trip away I was able to use the D430 for a whole day without a fresh charge, which is an attractive feature if ever there were one.


As is always the case for notebooks in this sector, you do pay a significant price for such features. This top of the range example will set you back over £1,700, however one could easily attain a more affordable price simply by tweaking the configuration. Take away the superfluous (to most people at least) MediaBase and the price is already a more palatable £1,445. Then, switch from the 32GB SSD to a standard 80GB SATA HDD and the price drops to just under £1,300. For that price you’re still getting the faster ULV CPU, embedded HSDPA and both a 6-cell and 9-cell battery and though you might miss the faster SSD hard drive, you’ll still enjoy very good battery life. 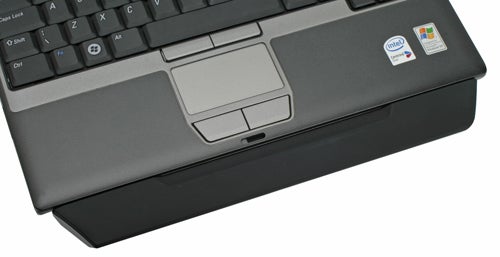 
An intuitively designed, durable and well featured ultra-portable, the lack of an integrated optical drive is the only reasonable complaint one can place against the D430. As such, if you’re after a notebook that’s easy to live with and will last as long as you need to, then the Latitude D430 is a very good option.