Back in May I reviewed the Dell Latitude D620 and was very impressed. With the D620 Dell had produced a well built and feature rich business notebook with an attractive design and good ergonomics. I was therefore keen to take a look at the Latitude D420, which represents Dell’s latest ultra-portable business offering. 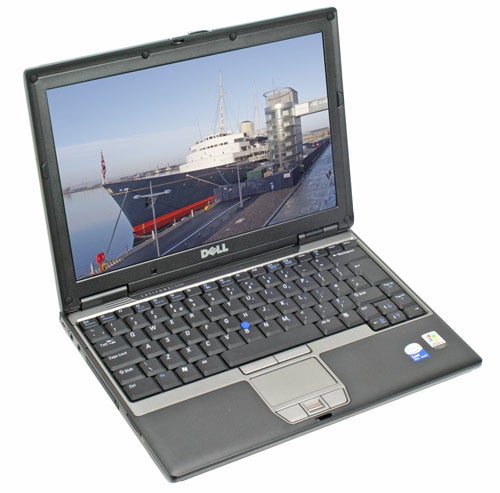 As one might expect, the D420 looks like a small D620 – it looks like Dell is keen to keep the same styling across various models, much like the IBM ThinkPads. There’s definitely nothing wrong with the Latitude styling – the matt sliver and black finish has a minimalist look to it that should please the corporate masses. It’s also pretty light at 1.49kg with the standard battery, while even with the extended battery attached, the D420 only weighs in at 1.67kg. With dimensions of 294 x 210 x 25mm (WxDxH) it’s not too big either – although not quite as svelte as the Latitude X1, which is in fact a re-badged Samsung Q30.


As well as being thin and light, the D420 is also the first Dell notebook with an integrated HSDPA 3G module. Actually, the D620 that I reviewed had a 3G module built into it, but it wasn’t activated, so in reality, this is the first 3G notebook that I’ve seen from Dell. Dell has an agreement with Vodafone, so if you buy a D420 it will ship with a Vodafone SIM already installed – then it’s just a matter of activating the SIM and you’re away. 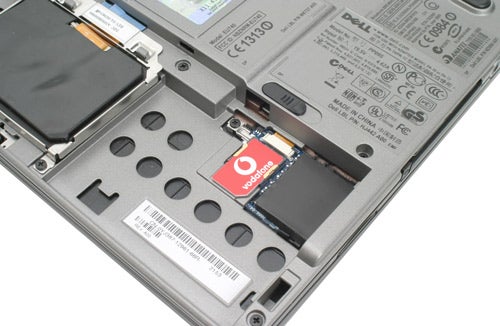 Performance from the integrated HSDPA module was very good and I managed to get the full 1.8Mbit/sec download speed whenever I connected. I used the Dell in a number of locations and it managed to lock onto a 3G signal pretty much everywhere. Dell supplies its own utility for connecting via the integrated HSDPA module, but the Vodafone Mobile Connect desktop is also supplied in the box on a USB memory key. There’s nothing stopping a customer from using a non-Vodafone SIM with the D420, but of course you’ll have to also get corresponding software, since the Dell utility is Vodafone specific.


Considering that the D420 has an integrated HSDPA module, I could forgive Dell for not including a PC Card slot – but despite its slim form, this machine still sports a Type II PC Card slot, something that the Dell X1 ultra-portable lacked. Although I can’t really think of anything that you’d need to put into the PC Card slot. 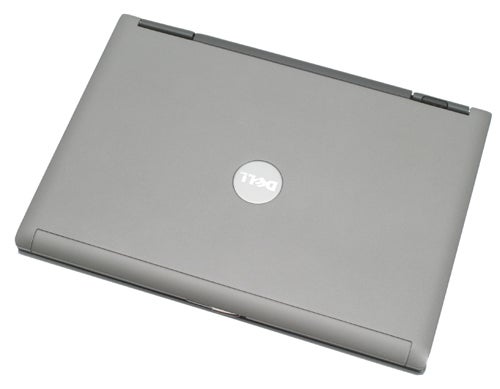 Of course HSDPA isn’t the only wireless connectivity on offer with the D420, you also get integrated 802.11a, b and g. The Wi-Fi adapter is Dell branded, which explains why the D420 doesn’t wear a Centrino badge – an Intel Wi-Fi adapter is necessary for Centrino branding. But don’t let the lack of a Centrino badge put you off, this notebook still has all the right boxes ticked. As well as Wi-Fi, you also get integrated Bluetooth, so you’ll have no problem transferring pictures/music/contacts to and from your mobile phone. There’s even an infrared port at the rear of the chassis, although there didn’t seem to be any drivers loaded for it on my review sample. 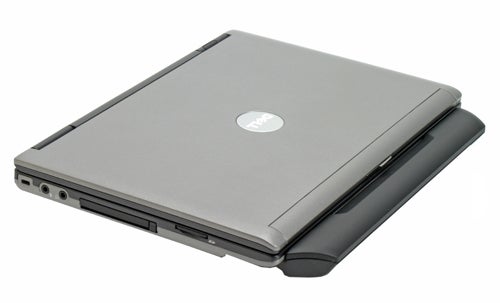 Staying at the cutting edge, the D420 is also the first truly ultra-portable notebook that I’ve seen with an Intel Core Duo CPU. Dell has achieved this feat by getting out of the gates quickly with Intel’s dual core ultra low voltage chip. The review sample that I received was equipped with an Intel Core Duo U2500, which is an ultra low voltage processor running at 1.2GHz. This is the same speed CPU as seen in the Sony VAIO TX series notebooks, but those machines only sport single core processors.


Backing up the ULV CPU is 1GB of memory, although it’s worth noting that the Intel integrated graphics will steal some of that. There’s also a 60GB hard disk, which is a reasonable size for an ultra-portable notebook, although Sony managed to squeeze an 80GB disk into the smaller TX3XP. 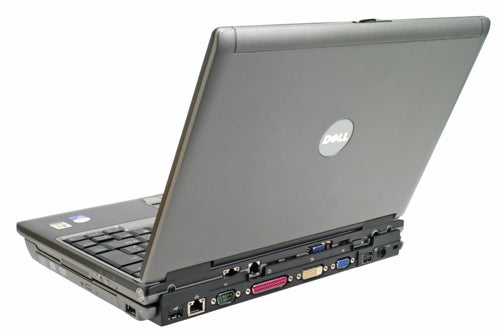 Like the D620 before it, this D420 has a widescreen aspect ratio display. The 12.1in screen sports a resolution of 1,280 x 800, which provides a generous amount of desktop real estate considering the physical size. There’s nothing to complain about with this screen – it’s bright, evenly lit and has no dead pixels in evidence. The viewing angle is also wide, while the colours are far more vivid than I would have expected from a screen without a high contrast coating. Dell has also equipped the D420 with an ambient light sensor, so the notebook will automatically adjust the brightness of the screen to match your environment.

The keyboard really highlights the difference between Dell’s Latitude and Inspiron ranges – not that I’m suggesting that the Inspiron notebooks are substandard, just that the Latitude keyboards exude a bit more quality. Even though this is a very small notebook, the keyboard feels deceptively large. The keys themselves are a good size, while there is a very impressive amount of travel, coupled with a solid and reassuring break. The Tab, Caps Lock, Shift, Return and Backspace keys are all large, while Dell has also made sure that the Ctrl key is at the bottom left where it should be. 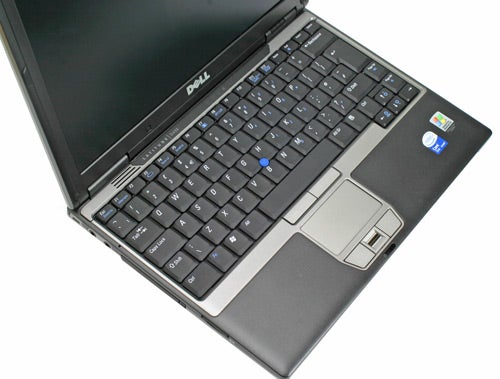 The D420 doesn’t have a pseudo-ThinkPad seven row keyboard like the D620, but it manages to squeeze pretty much everything you need into its six rows. The cursor keys are also dropped away from the main keyboard for easy access. I had no problem achieving a fast typing rate on the D420, with each key stroke feeling completely separated from the surrounding keys. It even sounds like you’re typing on a much larger notebook, without the slightest hint of a rattle, even when hitting the keys hard.


The pointing devices are impressive too, especially since Dell has provided both a trackpoint and a touch pad. If you read my notebook reviews regularly, you’ll be well aware that I much prefer trackpoints to touch pads, and things are no different with the D420. The trackpoint worked well, but it wasn’t quite as smooth or tactile as the example in the ThinkPad T60p that I reviewed recently. There are two buttons below the Spacebar that correspond with the trackpoint – they worked flawlessly, but I think I would have preferred them to have clicked when pressed. The touch pad is also a fine example and anyone who prefers this type of pointing device won’t be disappointed. There are two selector buttons below the touch pad, but again these didn’t respond with a click when depressed. 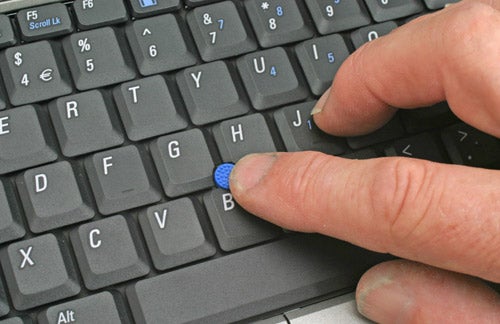 Nestling between the touch pad’s selector buttons is a fingerprint scanner. As always, I’m glad to see a device like this on a notebook, especially a business notebook. Even though biometric security isn’t infallible, it is easy to use, which means that users might actually implement it, rather than choosing to employ no security at all.


Taking a tour around the chassis reveals a lot of connectivity squeezed into a very small space. On the right you’ll find the power button and the hardware switch for the wireless adapters. This switch also doubles as a Wi-Fi sniffer, so you can seek out wireless networks without having to boot up the notebook. You can even configure the sniffer to only report if there is an open hotspot, to save you booting up and realising that you need an encryption key. 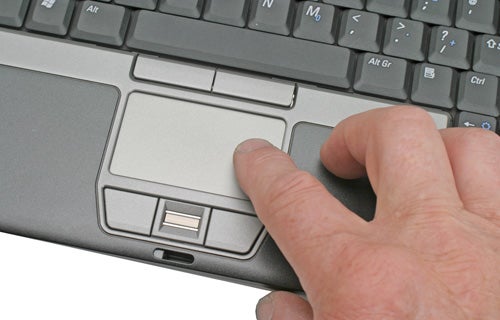 The front of the chassis is completely empty, but the left is populated with a Type II PC Card slot, an SD Card slot, a headphone socket and a microphone socket. Finally at the rear you’ll find two USB 2.0 ports and a third USB 2.0 port, complete with a USB power socket. Also at the rear is a network port for the integrated Broadcom Gigabit Ethernet controller, a modem socket, a D-SUB port, a four-pin FireWire port, an IrDA port and the mains power socket.

You’ve probably noticed that I didn’t mention an optical drive, and that’s because the D420 doesn’t have an integrated optical drive. However, you do get a docking base with the unit, complete with a DVD writer installed. The docking base also provides three USB 2.0 ports (one with power), a headphone socket, a D-SUB port, a DVI port for connecting digitally to an external monitor, a parallel port, a serial port and finally an Ethernet port. Clearly Dell still thinks that corporate clients need legacy connection options, and that’s probably very true.


When it comes to performance, the D420 isn’t going to set any records – but then ultra-portable notebooks are not built for outright speed. That said, there’s very little that you wouldn’t be able to run on this machine, and if you were worried about performance, it’s probably worth pushing the memory complement up to its maximum 1.5GB.

What really counts with a notebook like this is battery life. Using the standard battery, the D420 turned in a MobileMark 2005 battery life score of three hours 25 minutes, which is reasonable, but nothing to write home about. However, once I plugged in the exteneded battery, that time rose to a very respectable six hours 20 minutes. It’s also good to know that the extended battery only costs £33 extra.


Talking of price, the Latitude D420 is a bit of a bargain and will probably look attractive to consumers as well as business users. At £1,350 including VAT, you’re getting a lot for your money with this little notebook, and when you throw in the three year, on-site International warranty, it’s impossible not to recommend the D420.


Dell’s new Latitude range just goes from strength to strength. The D620 was a great notebook at a very attractive price, and this D420 continues that trend. Not only is the D420 well built, stylish, small and light, but it’s also feature rich. The inclusion of the integrated HSDPA module is just icing on the cake and makes this the ideal notebook for the road warrior who needs to always be connected.