Dell has been on something of a roll recently. Its new range of XPS notebooks, the M1330 and M1530 were both great machines, while its desktop offerings, like the XPS 420, haven’t been half bad either. But let it not be said that Dell has had things all its own way, because there have been a few turkeys lodged in there too – the XPS M1730 springs to mind. 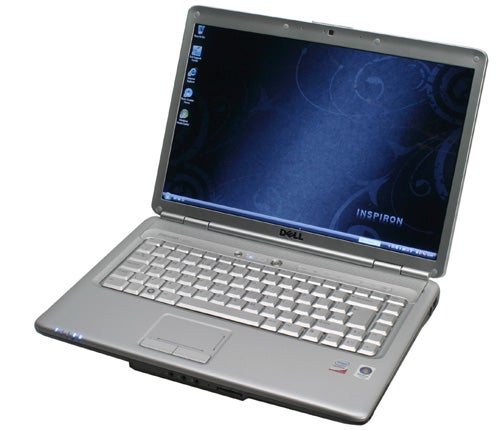 Another underwhelming effort was the previous Inspiron laptop, the Inspiron 1520. Though it introduced some new elements, such as a range of colourful finishes, it was bulky and uninspiring in a time when notebooks were becoming slimmer and easier to handle. Indeed, the new XPS notebooks were very much the response to such criticisms and Dell seems to have taken the lessons learnt there and applied them to its replacement, the Inspiron 1525.


An entry level 15.4in notebook, the 1525 shares a very similar wedge shaped base to that of the XPS M1530. This is definitely not a bad thing. Dell quotes a starting weight of 2.7kg with a four-cell battery, but we found it weighed exactly that with a standard six-cell battery. This is a very decent weight for a notebook of this size, while the quoted thickness of 25mm to 37mm, front to back, means it feels slim and elegant.

There’s also an even larger array of lid finishes to choose from. Standard options are for either a matte black or glossy white finish, while you can also choose from pink, brown, red, green or yellow Microsatin finishes or a new selection of designs called Commotion, Street, Chill and Blossom. Our sample has the Street design (above, on the left); probably the worst of the lot though a couple of them look pretty decent.


Overall, initial impressions of the Inspiron 1525 are almost entirely positive. Its new slimmer and lighter frame is a massive step forward, while the selection of lid designs is exhaustive. Inside things look good too; with nice textured sliver plastic and handy touch-sensitive media controls ripped more or less directly from the XPS range. Dell has also borrowed a trick from HP by sinking the touch pad into the chassis, and the keyboard is truly excellent, with light, crisp and responsive keys that make typing a breeze. 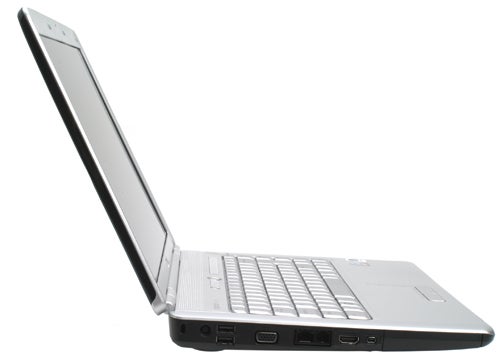 Again, the keyboard is identical to that found on the XPS range, but not everything is the same. You don’t get a slot-loading optical drive and the battery packs lack the useful little battery meter that the premium line has. But, though the 1525 is noticeably cheaper, it doesn’t look or feel like a cheap laptop, so you needn’t feel embarrassed to own one – quite the contrary, in fact.

As ever, there’s a fairly extensive selection of options on hand, with CPU offerings going all the way back to a 1.6GHz T2330 to the more recent T8100 and T8300 45nm Penryn CPUs – both of which can be read about in our Inside Mobile Penryn feature. Our sample system sits somewhere towards the upper end of the range, with an Intel Core 2 Duo T7250 that runs at 2.0GHz with 2MB L2 Cache and a 800MHz Front Side Bus. This is supported by 2GBs of 667MHz DDR2 RAM, with a 160GB 7200rpm SATA HDD.

Graphics, as with the whole range, is supplied by Intel’s GMA X3100 integrated solution and there are no other options available. This may upset some people, but if you’re after discrete graphics then the XPS range is where you want to be and a large majority of people simply don’t need or want a laptop to play games on, especially when the integrated graphics generates some tangible improvements in battery life.


Networking options are also excellent. Our system came with Intel Draft N Wireless, 10/100 Fast Ethernet and Bluetooth 2.0+ EDR, so you’re not missing out on much. You also get a 2.0 megapixel webcam as standard and a handy little remote that sits in the 54mm ExpressCard slot.

Connection options include HDMI, D-SUB and S-Video for video, four USB ports and FireWire, along with staples such as Ethernet and modem ports. Meanwhile, on the front, you’ll find a 5-in-1 memory card reader, dual headphone outputs, a microphone input and an infrared receiver for the supplied remote. All in all, it’s a healthy selection, though if there’s a single criticism it’s that the four USB ports are a little crowded, so you may find that some devices will block the other ports.


Things only get better when you take into account the display, though. This system came equipped with a 1,440 x 900 TrueLife glossy screen and it’s absolutely superb. Good black levels, sharp text and vibrant colours make this one of the better notebook displays you’ll see in this category, while you can also opt for a 1,280 x 800 TrueLife panel or a standard anti-glare option as well.

And, were this not enough, the Inspiron 1525 offers superb value for money. With the range starting at £329, our sample system would set you back £624 inc. VAT and shipping, which for a notebook with Draft N WiFi and an excellent screen, is great value. Moreover, if you select Dell’s highest basic spec you could get a similar system with a 250GB HDD and 3GB of system memory for around £550 inc. VAT and shipping. You could also select a 2.1GHz T8100 or2.4GHz T8300 for only £40 and £70 more.

For performance testing the 1525 was put through our usual suite of tests, including: PCMark 05 and Vantage, our in-house Photoshop Elements and Virtual Dub tests and Mobile Mark 2007. Overall results were very encouraging, with the Inspiron 1525 putting in an excellent performance. Its faster hard drive meant it edged our test machines in some of our tests, though the XPS M1530 obviously won where any graphics intensive tasks were concerned.

Most interesting, though, were the battery life tests – or rather ‘test’ since Mobile Mark 2007 continues to drive an otherwise sane journalist round the bend. Running the Productivity test using the Balanced profile and default brightness level, the Inspiron 1525 managed four hours and 10 minutes. This, with a six-cell 56WHr battery, was very impressive; so impressive we felt compelled to run the test again, but found no discernable difference. Subjective use provided further evidence of its longevity, being able to watch a two hour long film with no problems, while the machine ran cool and quiet throughout. 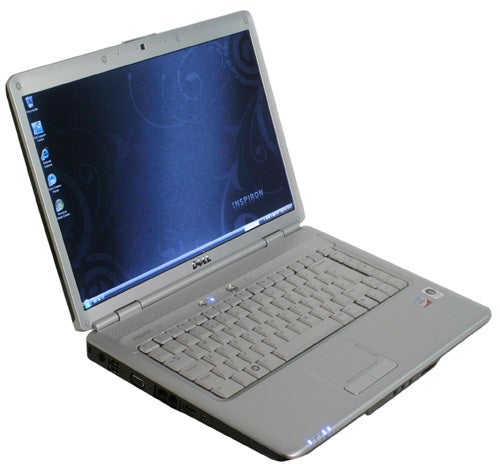 This solid performance and outstanding battery life sealed the deal as far as the Inspiron 1525 was concerned. For the price it looks and feels great to use, while the feature set is comprehensive. Are there any real faults? As mentioned before the USB ports are a little crowded, while the ‘Street’ design of our system isn’t the best, but there’s loads of choice available and a USB hub could solve any port issues. One other niggle would be the speakers, which are average at best, but at this price it’s a fault we could easily forgive.


Overall, the Inspiron 1525 is a wonderfully balanced entry level system, offering something for almost everyone – the only exception being gamers. Superb battery life and decent display options are married to a great selection of features, making this one of the best options in the value 15.4in sector. 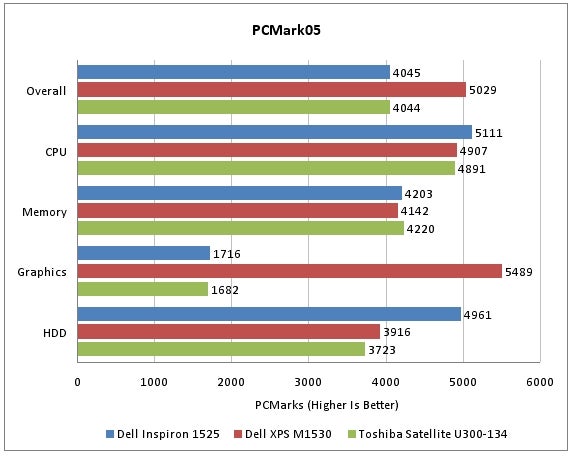 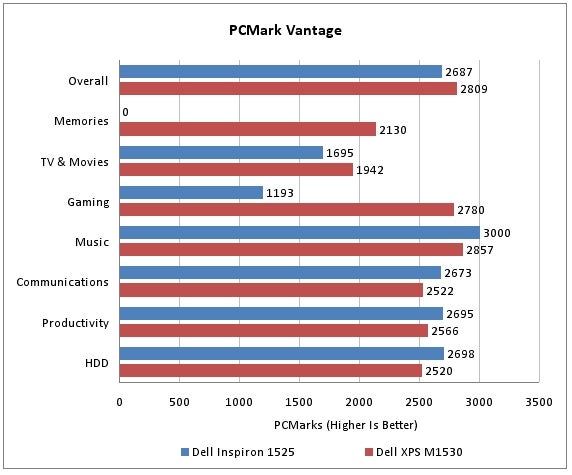 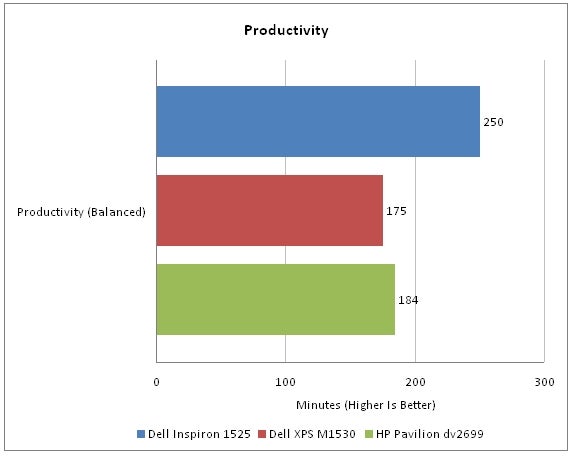