The 2150cdn is Dell’s new player at the lower end of the workgroup colour laser market – a monolithic machine designed to print up to 23ppm. Although some of its lower-end colour page printers use LED engines, this machine and others in the same range continue to use laser mechanisms. 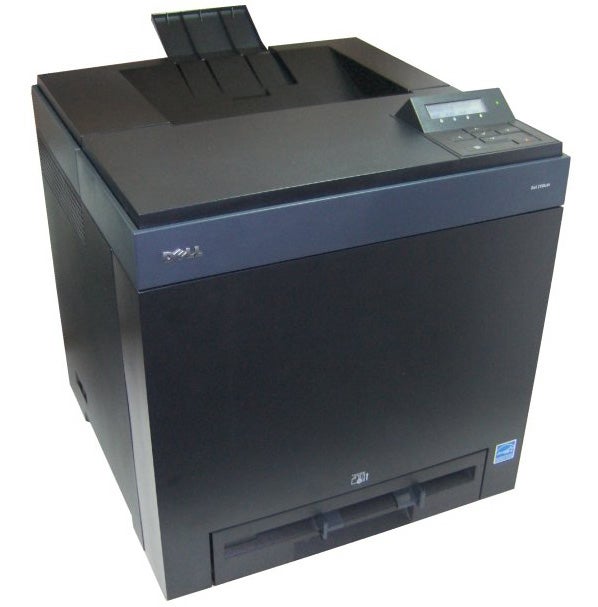 If you believe the Borg have what it takes in industrial design, you’ll love the 2150cdn, which, without the pipework, is still a big, black cube. The only things to really break the square-cut lines of the machine are the inset output tray in its top surface and the triangular ridge supporting its 2-line, 16-character, backlit LCD display.


The control panel is very logically designed, with just seven buttons. There’s a diamond of cursor keys, with a tick for OK in the centre, plus a key to call up the menus and another to cancel or back-up through the levels. 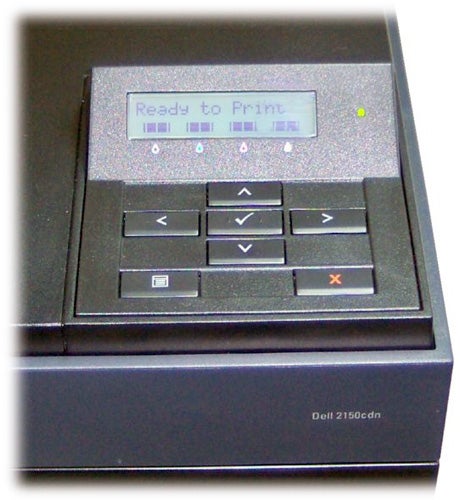 A single paper tray sits in the front panel and allows for 250-sheets of plain paper. There’s scope for envelopes and special media, too, but only one item at a time, as the printer has a feed slot, rather than a pull-down, multi-purpose tray. A second 250-sheet tray is available as an option, but the maximum capacity is still only 501 sheets.


There’s no front-panel USB socket for printing from USB drives and the only sockets at the back are for USB input from a computer and a gigabit Ethernet connection for networking. This model has no wireless, though a plug-in dongle is available as another option 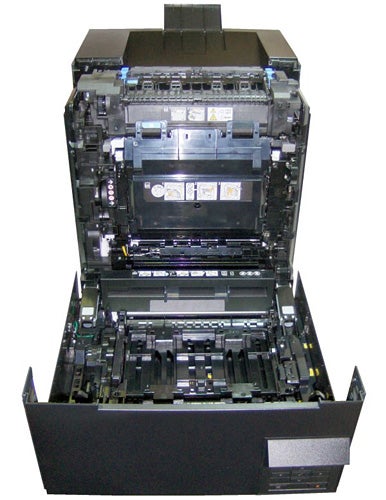 The drum and fuser unit is supplied in situ and is accessed by folding down the front panel of the printer. It should only need maintenance at the end of its life and replacement is included in the standard service agreement, the first year of which is included in the price of the 2150cdn. The four toner cartridges, which are available in two yields, slot in at the side, behind a hinged cover.

Dell rates this printer at 23ppm in black and colour. We rate it at a maximum of 17.7ppm, printing a 20-page black text document. That’s a good bit short of the claimed speed and without a draft mode and with only a few seconds spent processing before paper starts to feed, it’s hard to see where Dell’s figures come from.


On shorter, 5-page documents, the speeds we recorded were 11.5ppm for black and 12ppm for colour, only around half the speed on the spec sheet. Since the average length of an office document is still four pages, these are the speeds you’re more likely to see. 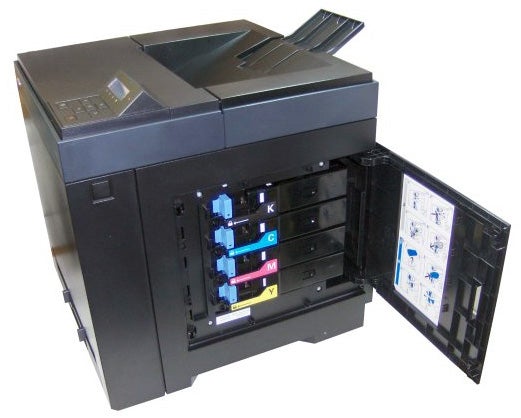 Compare them with those from the Brother HL-4140CN at around the same price, though not a duplex machine. It’s rated at 22ppm but, on the same five-page documents, gave speeds of 14.3ppm and 9.7ppm, respectively. Dell has a definite edge with the colour print speed, but lags significantly when printing in black.


Print quality, from the machine’s 600dpi engine, is more than good enough for anything you’re likely to want in an office. Black text is very sharp and clean, with well-formed characters showing no misplaced toner and being especially dense and black in headings and other emboldened text.


Colour graphics are also dense and bright, ideal for clear, visually attractive graphs and charts and with no signs of misalignment when printing black text over colour backgrounds. 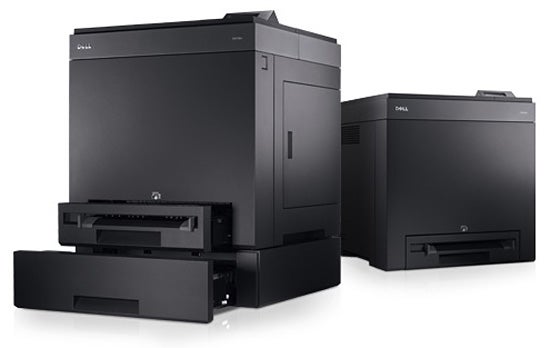 Even a photo print, not most colour lasers’ favourite subject matter, came through with less of the seaside postcard effect that a limited colour range can often produce. Here the image was smooth, with no sign of banding and good levels of detail. The dot pitch is just about visible, but by no means obtrusive.


Using the cheapest consumables available from the Dell site gives a cost per ISO page of 3.0p for black and 13.8p for colour, including 0.7p for paper. Again, using the Brother HL-4140CN for comparison, the running costs are very similar for both machines and comparing more widely, this Dell is bang in the middle of the field of its main competitors.


Dell’s 2150cdn is a good, workgroup colour printer, producing excellent prints at reasonable cost, though not always as quickly as some of its rivals. It would be good to have niceties such as a front panel USB port and a multipurpose tray that could handle more than a single sheet at a time. Even so, it represents good value for money and is a sturdy, deliberate workhorse.