The problem with mounting your TV on the wall is that it can get quite tricky when you want to install a speaker system near it. The point of wall-mounting a TV is to free up floor space, so by definition floorstanders defeat the object, and although most bookshelf speakers can be wall mounted, their bulky dimensions often make them look gawky when placed next to slim flatpanel TVs.


The solution is to invest in a set of slimline wall-mountable speakers with the same sort of depth as your TV, and that’s where Mythos XTR-50 comes in. Made by American manufacturer Definitive Technology, these speakers measure just 38mm deep yet their creators reckon they deliver the ‘dynamic punch, wide frequency range and broad dispersion of full size speakers’. 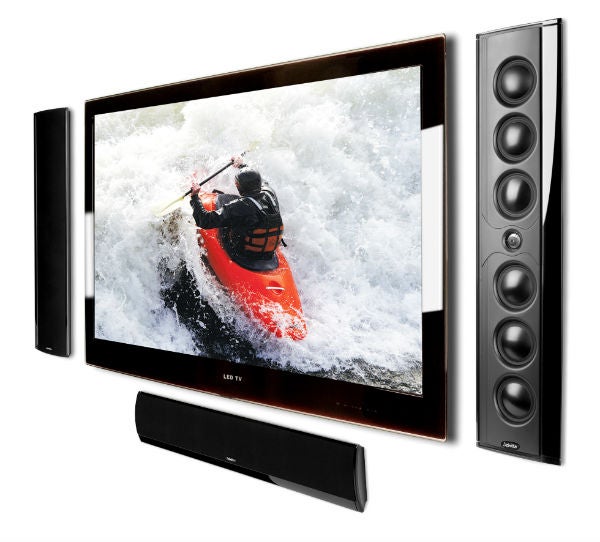 There are four different models of speaker within the Mythos range – the XTR-60, designed for mammoth-sized TVs between 55 and 60in; the XTR-40 for 40 to 42in TVs; the smaller-sized XTR-20BP for on-wall surround sound use; and finally the XTR-50, which is designed for TVs between 46 and 55in. 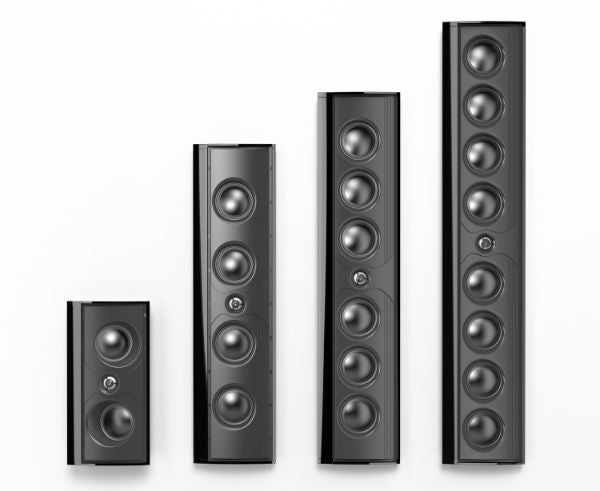 The speakers are available individually or in systems. We
were sent a package containing three XTR-50 speakers, allowing you to place one
either side of the screen vertically and the other below it horizontally as a
centre speaker – all of the speakers can be used for either purpose.
With a crossover of 100Hz the system’s
distributor Pulse always recommends pairing it with a subwoofer, specifically
one of Definitive Technology’s Supercube subs. We weren’t supplied with one for
our test so we used an Acoustic Energy model
instead.

The build quality of the units is phenomenal. The enclosures are fashioned from hand-polished aircraft grade extruded aluminium, giving them amazing rigidity. On the inside Definitive has used stiffening ribs and channels to add even more rigidity to the aluminium and eliminate resonance.

The speakers are reasonably attractive too, styled in a sassy gloss black finish with the large removable grille taking up most of the front (you also get a magnetic Definitive badge to plonk on the front).

A little workmanlike perhaps – on the wall they just look like big black slabs – but that’s kind of the point. They’re designed to blend with their surroundings and not draw attention away from the TV screen, so on that score they’re perfect. 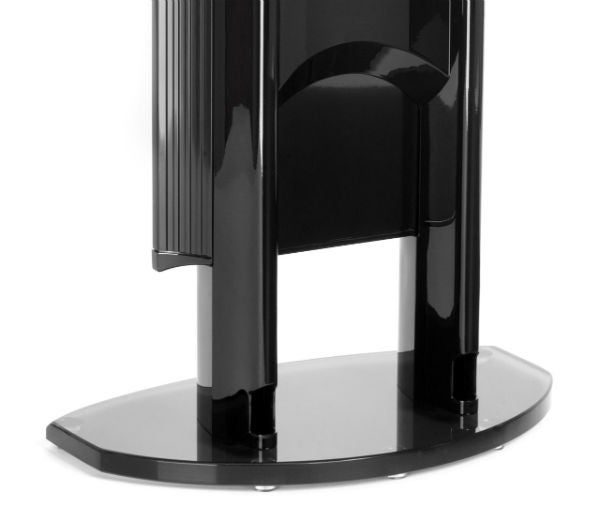 For wall mounting, you get all the required hardware in the box, but if you’re not exactly handy with a drill and screwdriver, rest assured that the XTR-50s can also be mounted on the supplied table stands. These are a cut above your average stands too, as they’re crafted from smoked tempered glass that has a real feeling of quality. You even get the bits you need to place the centre speaker on a table top horizontally – talk about covering all bases (groan).

The secret of the Mythos’ skinny dimensions is Definitive Technology’s XTDD drivers. Using computer modelling, the company’s audio boffins managed to squeeze them down to ultra-compact dimensions by eliminating every last bit of wasted space and maximising their surface area. What’s more, the magnets for each driver protrude from the rear to minimise the depth further.

Frequency response is quoted as 92Hz – 30kHz, with a sensitivity rating of 92dB – so clearly the addition of a sub is required to fill out the bottom end. The company reckons they’re suitable for amps of up to 100W per channel and recommends you set it to ‘small’.

How easy the XTR-50s are to install pretty much depends on the quality of your DIY skills – with all the hardware in the box, clearly written instructions and a fairly self-explanatory feel to the process, it shouldn’t really be a challenge. 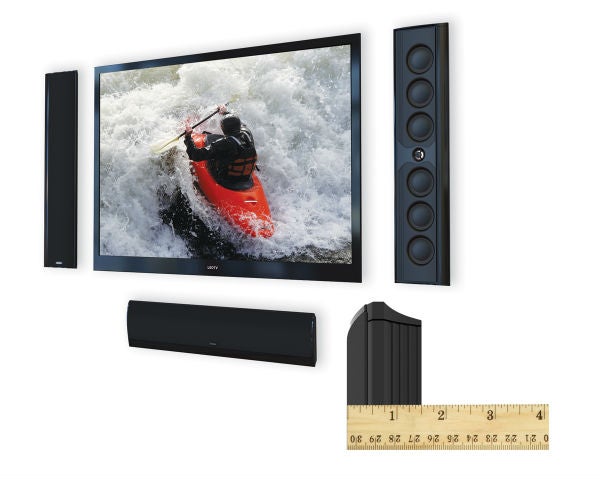 Connecting speaker cables is a little more fiddly than we’re used to though. On the back of each speaker is a two-pin terminal, into which you have to plug in a small attachment that sports screws to hold the wires in place, but this little gizmo never really felt like it was in place securely. Such a fiddly connection method is understandable given the problems that traditional binding posts would create for wall-mounting.

We gave the Mythos system a blast of Hellboy II on Blu-ray (DTS HD Master Audio) as its mixture of gung-ho action scenes and intricately detailed quiet moments is a great way of revealing the range of any home cinema speaker.

Naturally we skipped straight to Hellboy’s battle with the Elemental (chapter 12) and on the whole we’re impressed by the quality on offer from the Mythos system, although it’s not quite the majestic, authoritative performance we were expecting for the money. 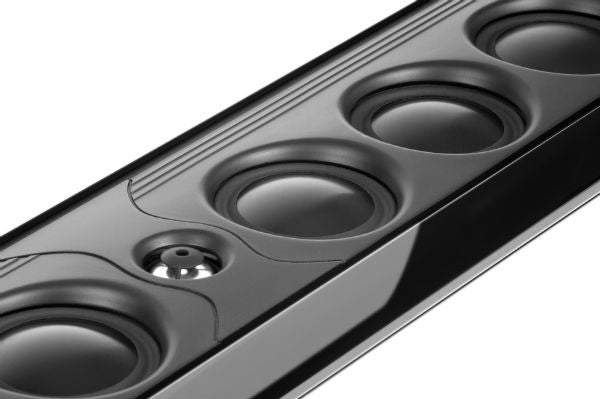 Let’s start with the positives. The XTR-50s stands head and shoulders above even the best TV speakers, offering a meatier, more detailed and potent sound. With the above action scene, you get a decent sense of scale, with the Elemental’s huge footsteps and general chaos around it relayed with real urgency and attack. These speakers also do a wonderful job of throwing sounds far and wide, as well as digging out detail.

Nowhere is this more apparent than the Troll Market scene, which is alive with subtle effects. The XTR-50s dig out stuff that would go under the radar of most flatpanel TVs and cheapo home cinema speakers, and it adds to the overall depth and immersion of the scene. 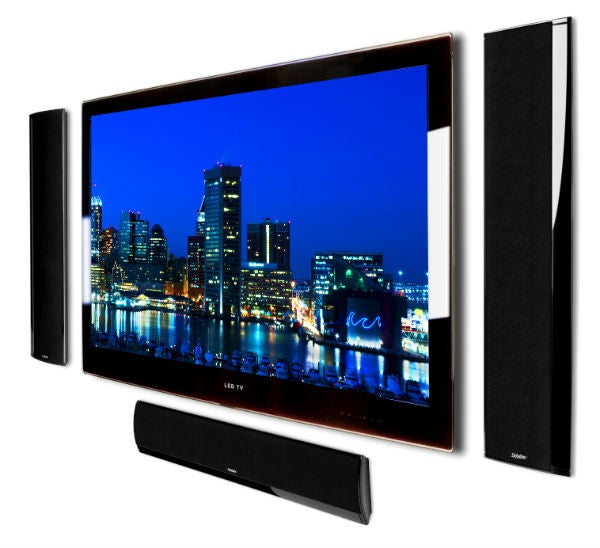 However, it is essential that you use these speakers with
a subwoofer, so if you don’t already have one you’ll definitely need to factor
in the extra cost. Without it the sound leans too greatly towards the top end,
resulting in an unbalanced soundstage. Thankfully the system’s distributors
won’t let you buy it without one (or will stongly advise against it) so that’s
not really an issue.

That said, we could still detect a slightly bright edge to some of
the high frequencies when pushed at loud volumes, which wasn’t a dealbreaker but
didn’t always make for a comfortable listen and stopped it reaching the heights
of KEF’s wonderful T205 slim-speaker system.

The Mythos XTR-50’s beautifully-made aluminium enclosures are exactly what you expect from a set of speakers at this price, and their 38mm depth is something of a miracle, making them incredibly easy to wall mount. When installed they make a stylish yet discreet audio solution – a terrific way of upgrading from rubbish flatpanel TV speakers. It’s just a shame it couldn’t hit the sonic heights of KEF’s T205 – the lack of bass makes a subwoofer essential, but that’s something that not all buyers will fancy, plus the overall sound isn’t as polished as we’d like for the money.

Addendum: We have been made aware that this system is not meant to be sold without a subwoofer, and have re-evaluated our review to reflect this since over-emphasis of the top end without a dedicated sub was our main criticism.