Blimey, do I need a holiday. Christmas is over, the New Year sucks, I’m back to work, the weather outside is miserable – constant unremitting drizzle without a sign of a blue sky in weeks – and there are enough strains of flu loitering around the neighbourhood that it’ll be a miracle if I don’t go down with something in the next few weeks. There hasn’t been a decent game on the shelves since mid-December, the TV has taken a turn for the worse, and life has rarely seemed so dreary.


Maybe what I need is a trip to Zack Island.


Just imagine it – a billionaire’s tropical playground, where bikini-clad babes play volleyball all week long, pausing only to jetski or frolic by the pool. Everyone’s friendly, and every night the girls all dish out gifts to each other like Christmas never came. You can hit the shops in the day, then win big at the Casino at night, and at the end of your two week stay you’ll have an album’s worth of photographic precious memories take home. Is there a better destination, anywhere in the world? 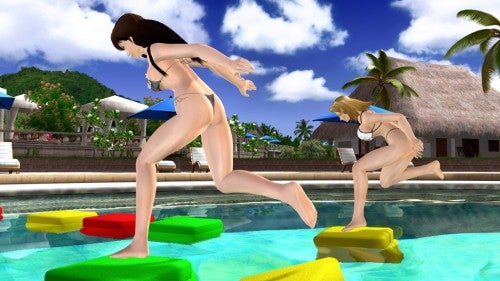 Well, yes, actually there is. For those of you who didn’t come across DoA Xtreme in its first Xbox incarnation, the idea is that you choose a girl from the popular not-too-feminist-friendly fighting series, deck her out in a variety of skimpy swimsuits and cute accessories, keep her busy in a series of holiday-related activities, and help her win friends amongst the other girls. For the new 360 version the gameplay has been (if you’ll excuse me) fleshed out a little to cover jetski racing, beach athletics and a couple more poolside games, but the game has retained its somewhat lazy, sun-drenched pace – this isn’t a game you play to win, but more of a weird, virtual vacation experience. 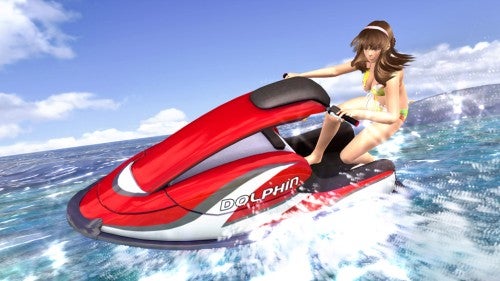 And that is kind of the problem. Nobody can dispute that DoA Xtreme 2 is a lovely game to look at. Sure, the girls have the same plastic anime look they had in Dead or Alive 4, but they are nevertheless beautifully rendered, and the various beach/poolside/jungle/undersea locations show that Team Ninja hasn’t lost its eye for cool lighting or stunning textural detail. The animation is a bit suspect – for a team that has made bouncing breast physics its speciality, you can’t help wondering if anyone at Team Ninja has ever actually looked at the real thing – but if you ever wanted an anime version of the behind-the-scenes video of the Sports Illustrated swimsuit calendar, this is about as close as you’re ever going to get. In fact, Team Ninja clearly wrote this game with exactly that audience in mind – you can even get the girls to skip a session on the Volleyball court or jetski course so that they can bask in the sun while you take pictures. Now’s your chance to live out your glamour photography dreams – zoom in close, shift focus to emphasize those natural curves, lovely jubbly. 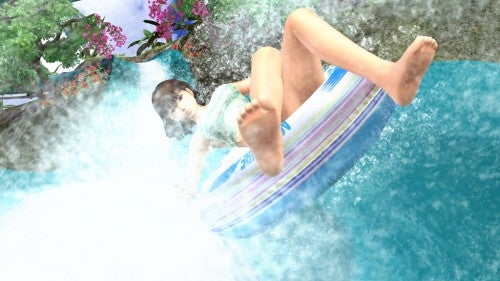 Ahem. Sorry about that. But once you’ve got past the slightly sad novelties of virtual voyeurism, you’re not actually left with much of a game. For a start, the two primary activities of your day – volleyball and jetski-racing – are both utterly unsatisfying. Beach volleyball has never been the most skilled or tactically sophisticated of games, but here it’s an undeniably limited affair, with only a few basic moves and most of your success or failure coming down to basic timing. Once you find an approach that works against one set of opponents, you can pretty much rely on it throughout the game. Of course, there is an argument that you don’t play the volleyball for its own sake, but for the opportunity to watch an attractively arrayed collection of polygons engage in an activity that pushes T&A technology to its very limits. All the same, couldn’t they have made it a bit more enthralling? 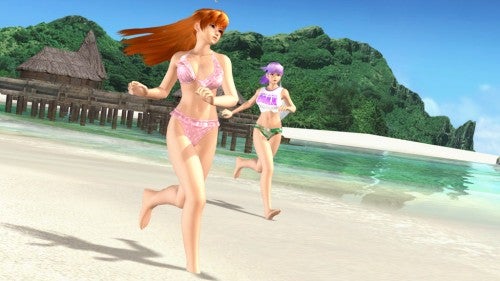 Jetski racing, meanwhile, is a huge disappointment. Team Ninja head honcho, Tomonubo Itakagi, has talked of wanting to pay homage to the N64 classic WaveRace, but if so his studio seem to have precious little idea what made their inspiration work. WaveRace seemed to catch the feeling of riding a small, inherently unstable craft on choppy seas, fighting the tide’s ebb and flow to maintain the racing line, while leaning skilfully to guide it round each bend. It had engaging racing against tough opponents, and fantastic, imaginative tracks that – at the time – really pushed the boundaries of what racing games could do. DoA Xtreme 2 gets none of this right – not the movement, not the water, not the competition. It’s like a poor Stars in Their Eyes rendition, and one that only makes you wish harder for someone to do a decent update of the real McCoy.

This leaves you with a few novelty activities – butt battle, tug-of-war, pool hopping, water-slide – which are spectacularly shallow, seemingly existing only to offer you more opportunities to ogle these digital beauties during activities that make their boobs wobble. Now, I’ve nothing against games featuring that sort of thing, provided my wife doesn’t catch me playing them, but my pleas of “I’m only in it for the gameplay” would be a little more convincing if I could muster even the slightest bit of evidence to back them up. 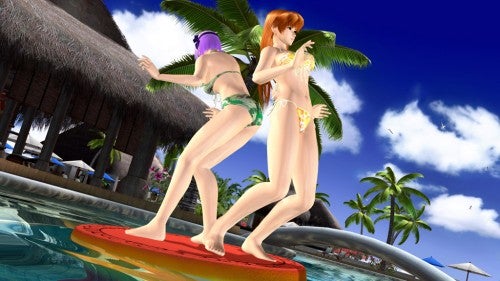 In fact, any hint of depth is in the portion of the game that the presumably male audience would presumably find the least interesting: buying thoughtful gifts for the other girls. Obviously, you can’t play doubles Volleyball alone, so the game requires you to develop close ties with your fellow female holiday-makers. Compliment them and send them the right prezzie, and they’ll be happy to pair up. Keep them sweet and win games with them, and they’ll stick with you. Annoy them, ignore them, or drop too many easy points and they’ll run off and find a new friend. OK. Fine. Some of you out there might well enjoy a game in which the key challenge is choosing the right combination of charming knick-knack and colourful wrapping paper. However, if so I doubt you’re in the same demographic that wants to see well-endowed digital models in tiny cozzies writhe around like Nuts cover-girls by the pool. Maybe, I’m wrong. Maybe it’s just that DoA Xtreme 2 has something for everyone, but I don’t think so. 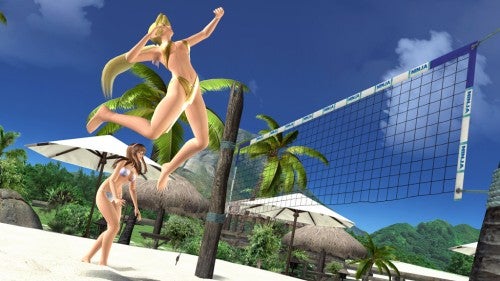 In fact, I don’t think it has nearly enough of anything for anyone. It’s all sex and shopping, but the supposedly sexy stuff isn’t really all that sexy, and who gives a fig about the shopping? Let’s be clear: there’s nothing wrong in producing a game in which scantily-clad virtual vixens wiggle for the camera, providing it’s actually fun to play. DoA Xtreme 2 isn’t. It’s dull. And after two-weeks of virtual holiday (which mercifully only takes a few hours to play through) I don’t find myself wanting to return. Instead, I find that the weather outside doesn’t look so bad, work isn’t really so tough, and at least I’ve got my health for now. I’ve taken several trips back to Zack Island, but my motives were more vocational than vacational, and I’d be happy not to do so ever again. So here’s a holiday tip – strike DoA Xtreme off your list, and save your money for more exciting destinations.


The graphics (and the girls) are as gorgeous as a Maldives sunset, but the bits that actually make the game are as dull as a wet weekend in Skeggie. Not quite a holiday from hell, but other virtual getaways can give you more.