Two years after its release, Dead by Daylight seems to be surviving just as well as any ‘final girl’ in a classic seventies/eighties slasher movie. It’s still in the top 20 of the games most played on Steam and it’s found new audiences on PS4 and Xbox One. One potential rival, Friday 13th, has already died a gruesome death, while tie-ins with many of the genre series – Halloween, Nightmare on Elm St, The Texas Chainsaw Massacre, Saw – have raised its profile with horror afficianadoes. And it deserves that success. With a new DLC chapter, Shattered Bloodlines, Dead by Daylight shows it has the stuff to be an unstoppable slasher movie monster; it’s relentless, oddly cunning, scary and exciting, and just when you think it’s over, you find that you still want more.

Let’s be clear about what we’re talking about here. While Shattered Bloodlines is billed as a brand new chapter, Dead by Daylight doesn’t trade in stories with meaningful progressions, new game modes or any of that stuff. You get a new killer, a new survivor and a new map.

As survivors, you’ll be rotating with all three along with all the existing killers, survivors and maps. In fact, while you can choose to play as new guy, Adam Francis, or as the haunting new killer, The Spirit, you can’t opt to play a match against the Spirit or even choose where the next match will be set.

Consider this, then, more a revaluation of where Dead by Daylight is two years on, and what the DLC and particularly Shattered Bloodlines have added to the mix. 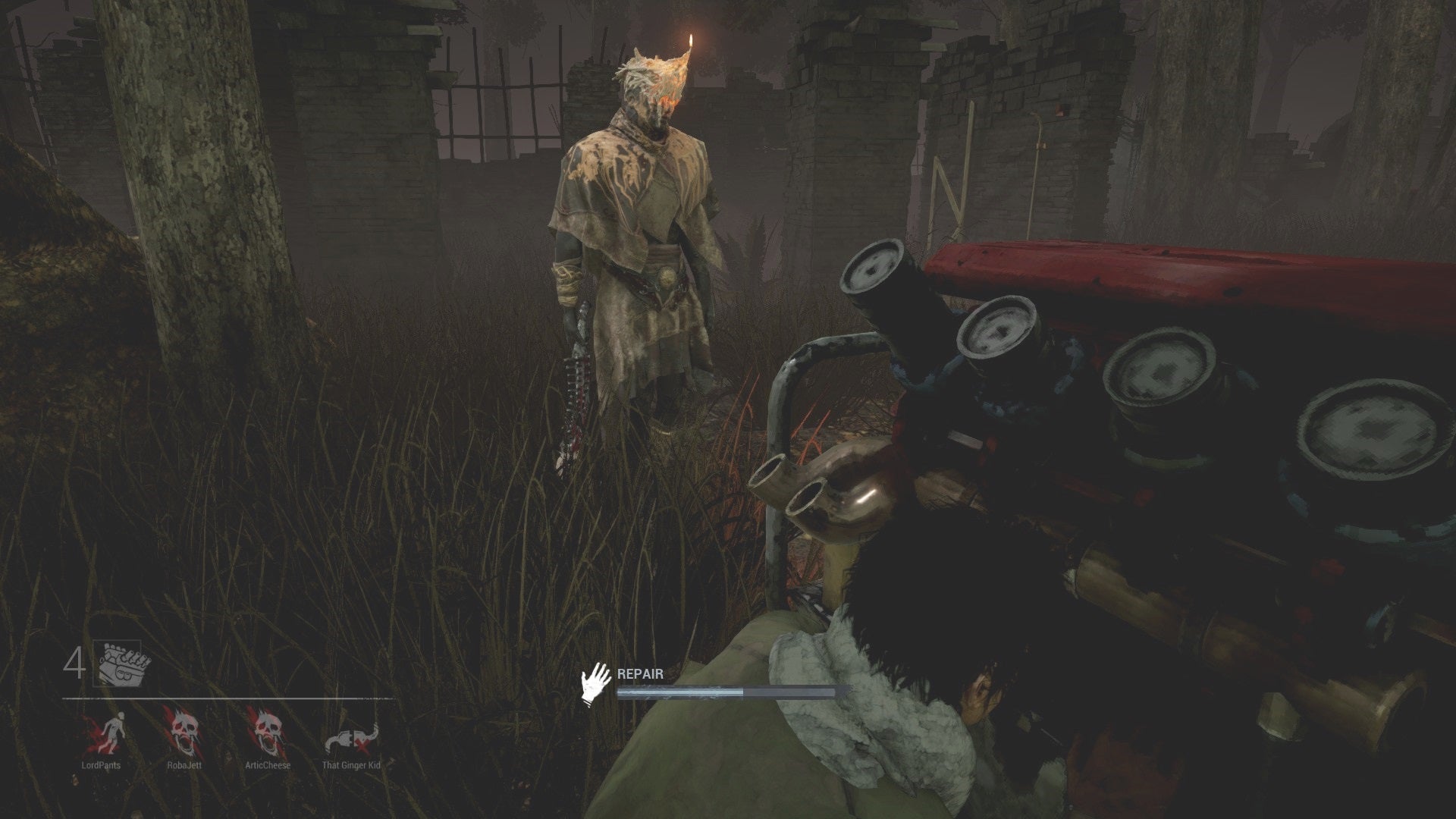 If you know nothing of Dead by Daylight, it’s probably best to check out the previous review. It’s an asychronous multiplayer game where four survivors wander around one of many creepy horror movie landscapes, trying to repair four generators to unlock an exit and escape. In their way is that match’s killer, each one armed with different physical or supernatural powers, and each with their own strengths and weaknesses.

Crucially, the survivors can’t harm the killer; they can only distract them, halt them temporarily and run away. The killer, meanwhile, has to do more than just hack away at the survivors with claws, axe, club or chainsaw – they have to wound the survivor, pick them up and hang them from a hook as a sacrifice to their dark god, The Entity.

Over the last two years Dead by Daylight has amassed some outstanding killers and maps. We’ve had a mad CIA neuroscientist in an abandoned asylum, a killer clown that roams a haunted chapel and a hatchet-wielding huntress in a spooky forest. These extra chapters are either cheap or completely free, and Shattered Bloodlines is another strong addition to the ranks.

Its revenant star, the Spirit, is a scary Japanese ghost in the vein of the late nineties wave of Asian horror. Think The Ring, The Grudge and Dark Water. She has the weird floating look, erratic movements and unsettling cadaverous details down, not to mention some nasty-looking clawed hands and crazed expressions. What she brings to the party, though, is a swift sword attack and ‘Yamoaka’s Haunting’ – a move which allows her to enter a different plane and walk to a new location. All the other players see is a weird dislocated decoy, not the Spirit’s form, giving her a few seconds in which she can rapidly switch position and set up a survivor for a nasty shock. 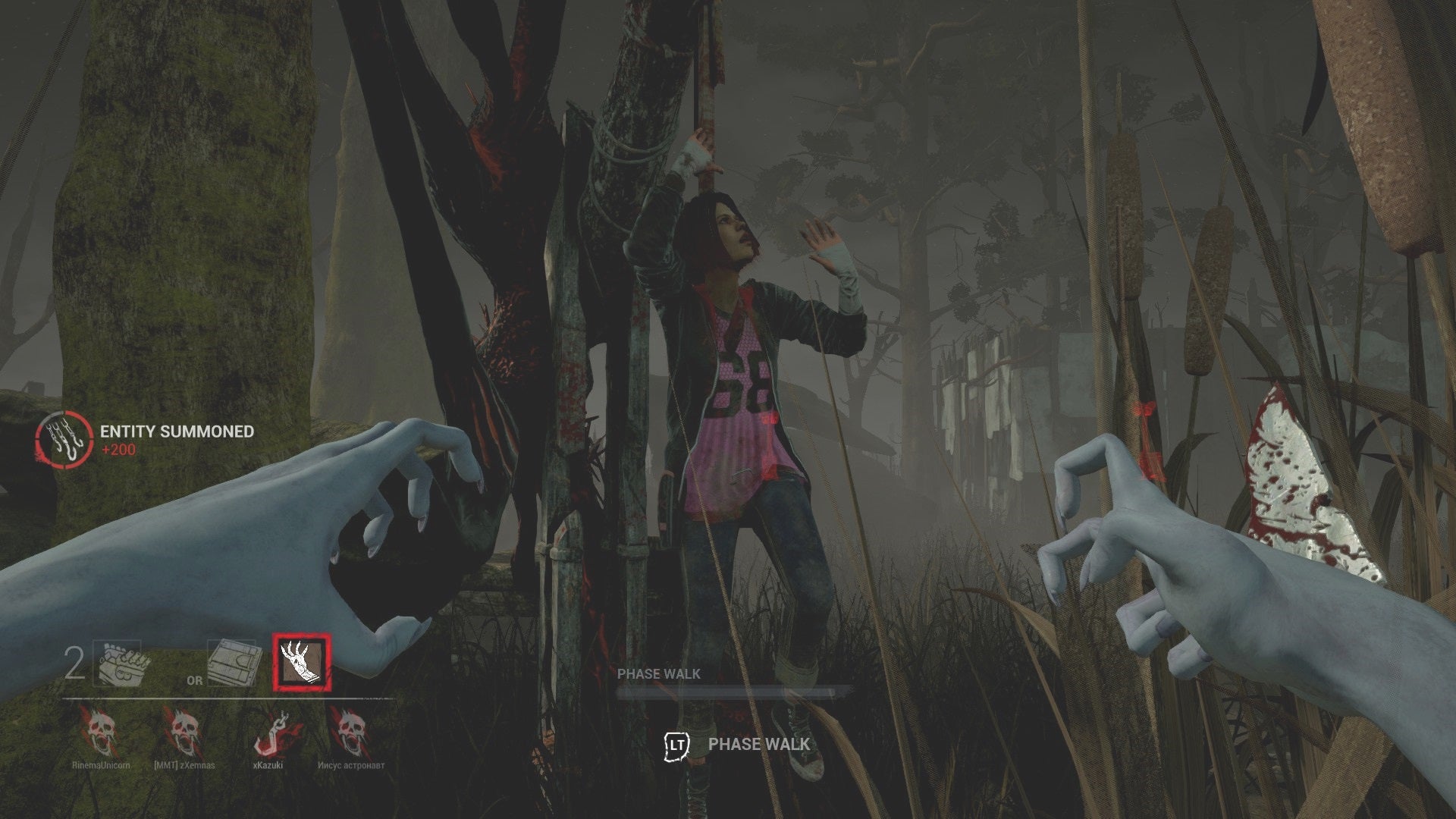 It’s a great move that you can really use creatively – sudden sneak attacks are very much The Spirit’s blood-red meat and drink. However, they’re restricted in that you can’t walk through walls like earlier killer, The Nurse, or spend more than five seconds in ethereal form, as was the case with invisible uber-fiend, the Wraith. Worse, she can’t see survivors while using her power, or their telltale blood trails, while a slow cooldown can also leave you at a disadvantage.

Not everyone likes The Spirit but I’ve got a lot of time for her, not least because I’ve done better with her than with previous killers, even winning or narrowly losing the odd match. As the killer, you always need to play tactically, keep the survivors divided and time when you attack and when you use your special powers. For me, The Spirit is one of the sneakiest foes of the whole bunch.

She can be tough to play against as well. She seems to be easier to escape from if you can wriggle while she’s trying to hang you on a hook, but she’s very fast and agile, and you can’t always be sure where she’s going to pop up next – much like the Wraith or Nurse. Personally, I find The Spirit pretty scary.

And this, after all, scares are at the heart of the game. At it’s best, against a killer who knows roughly what they’re doing, Dead by Daylight can be terrifying. Sure, you know it’s just hide and seek with knobs on, and that a smart group of survivors can run rings around a less-skilled killer. But try telling yourself that when the killer’s close by and you’re peeking furtively around a rock hoping that they’ll just go away. Try telling yourself that when a you fail a skill test on a generator, making it spark and bringing the killer homing in on your location. Your instant urge is to panic, run for cover and hope for the best, but you’re often better off moving quietly, where you won’t leave a scratch trail or so much noise. 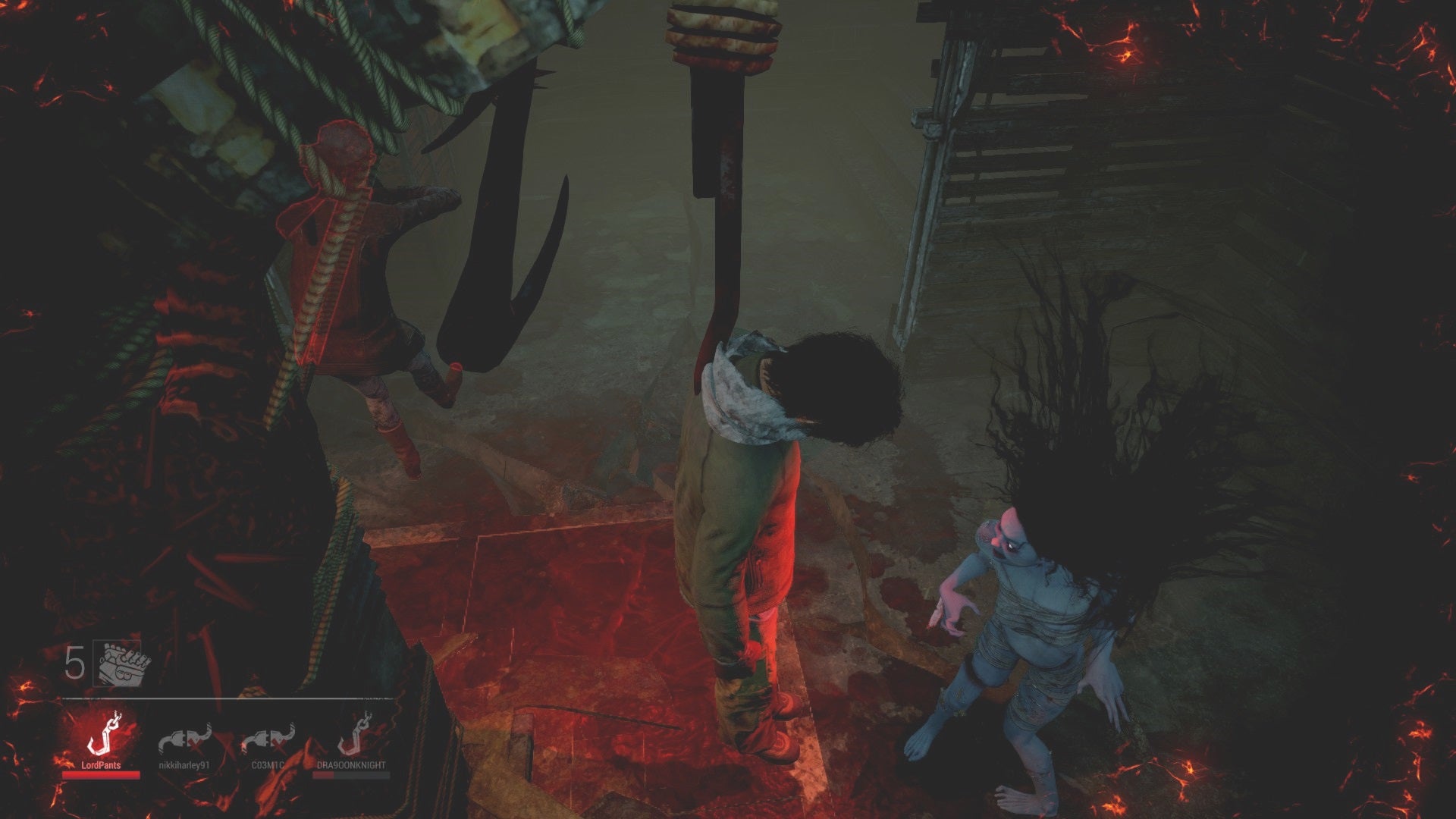 Mastering that impulse is harder than it sounds. Seriously, I’m glad Dead by Daylight isn’t available on PSVR. I’m still getting over Resident Evil 7 and I’d need a whole new wardrobe of brown trousers.

The visuals are fine in a slightly cartoon Left 4 Dead way – and I’m not sure you’d want Dead by Daylight photo-realistic – but it’s the sound that sells the experience. As the killer approaches you’re assailed by a thumping heartbeat, growing louder as they near and the killer’s own individual weird noise starts fading into the mix. You’re also all too aware of your own noises, especially the involuntary whimpers wounded survivors make. And this only gets worse if you also play as the killer, because successful killers know that the sound is key to tracking the survivors down.

On the survivors side, new guy Adam Francis has some fantastic perks for skill checks, distracting the killer and getting himself (literally) off the hook, all designed to key into the semi-altruistic gameplay that makes Dead by Daylight so fantastic. On the other hand, he also wears a stupid white coat that any half-perceptive killer can spot a mile away.

Dead by Daylight is a fairly simple game, and you can’t help wishing for different game modes or twists with specific killers. There’s also a sense that Behaviour Interactive’s game under-sells its fiction; that a little more framing in the style of Left 4 Dead or some kind of investigative mechanics would add something rich and new. Yet the different killers, different maps and different survivors give you a wide range of different tactics to explore – particularly as the progression systems, reset for each new season, give both survivors and killers increased powers or new capabilities. 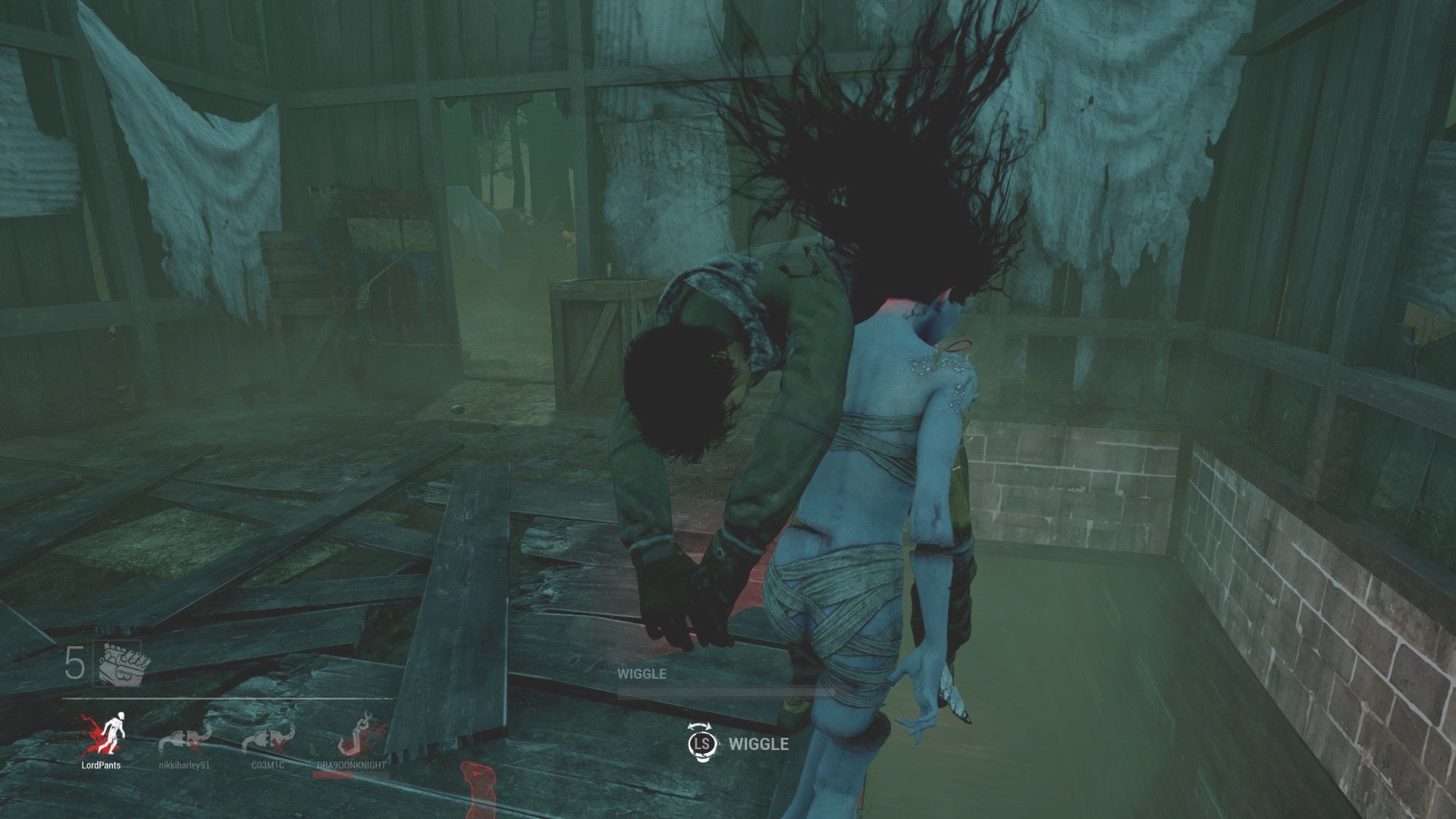 More importantly, the fact that you’re facing another human being (or beings) counts because whether they’re dumb, ingenious, relentless or clumsy, they’re rarely totally predictable. The team at Behaviour has also worked hard to add or change mechanics that unbalance the game, and while you’ll always find players complaining that a certain map is unbalanced or a certain killer under- or overpowered, there’s often a counter-argument that you can think around it – you’ve just got to find a strategy that works, which often means finding ways to work together. Seriously. You won’t find another game that doesn’t use voice chat where good players work so hard to revive, rescue and protect one another.

You’ve also got to appreciate Behaviour’s commitment to Dead by Daylight (and the same goes for publisher, Starbreeze, too). At a time when you might expect the team to have moved onto other projects or a sequel, there’s still more DLC in the pipeline, with the killers, maps and survivors to be unlocked through in-game rewards.

Dead by Daylight’s a little too repetitive to be your next online gaming feast, but it’s one hell of a palette cleanser; the game that, when you’re grown a little tired of PUBG, Fortnite, Destiny or whatever, you can keep coming back to for new thrills and terrors. There’s definitely space for a sequel with a little more depth and substance, but one of the great online games of the last few years still goes from strength to hellish strength, and there’s never been a better time to face your fears and break the nightmare.