Now that draft-802.11n wireless routers are becoming more prevalent we’re also finally seeing the move to Gigabit Ethernet as well. Netgear’s RangeMax WRN854T was the first to deliver high speed network ports and now its D-Links turn with its new RangeBooster N 650. With most vendors touting wireless speeds of up to 300Mbps, Fast Ethernet ports would simply cause a complete bottleneck between wireless and LAN users. Furthermore, the vast majority of new PCs now come with Gigabit LAN ports as standard so it makes perfect sense to reap their benefits.


D-Link’s routers have been through more than a few design changes over the past six months and it now takes a leaf from Netgear’s book as the DIR-655 is yet another slab of clinical white plastic. At the rear you have the four Gigabit Ethernet ports and an RJ-45 WAN port, which will require an external cable or ADSL modem with an Ethernet port for Internet access.


D-Link has trouble deciding whether to standardize on a USB port. We first saw it in the DIR-635 where its use was completely undocumented, it disappeared on the DSL-2740B and now it’s back again. Don’t be fooled into thinking you can stick external storage in it as its sole purpose is for loading USB flash drives with wireless configuration files created using the Windows Connect Now configuration wizard. 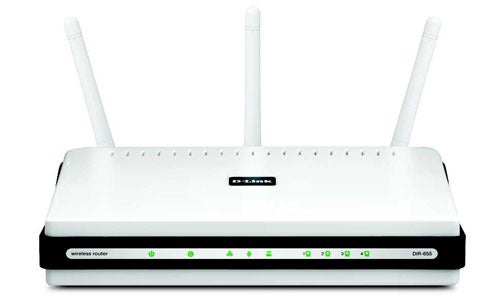 We ran this on an XP SP2 laptop where it asks for an SSID, offers to automatically create a WEP or WPA encryption key and then copies a file to a USB flash drive. When prompted, you stick it in the router and wait for the USB LED to flash three times indicating that the file has been downloaded and the router reconfigured. This worked fine during testing but make sure the access point is enabled first otherwise it won’t take the new settings.


General installation is handled nicely by the CD-ROM based wizard which hunts down the router, checks your Internet connection and offers to set up the wireless access point. The web interface is easy enough to use and D-Link scores highly for the sheer range of features on offer. Up to 24 virtual server and port forwarding entries are supported, you can control access for all systems with a MAC address list and prioritise specific application traffic with QoS (quality of service) rules.


Wireless security measures include WEP and WPA/WPA2 encryption plus SSID masking and MAC address filtering and WISH (Wireless Intelligent Stream Handling) adds a new dimension to prioritising wireless traffic. You can leave it to look after traffic such as audio and video streams, set it to automatic where it favours traffic such as VoIP over high demand traffic or you can add you own rules for ranges of IP addresses.

D-Link’s URL filtering rules are very versatile as you can compile a list of up to forty web site addresses. The Access Control feature allows you to create rules that determine what each system can access on the Internet. This lets you implement a stricter system as you can block access to all web sites except those in the white list. During testing this worked reasonably well as we could determine precisely what sites our wireless and wired users could access although it did cause problems with a lot of permitted web pages not loading correctly. Nevertheless, it is possible to set up different time schedules and limit general Internet access to specific times of each day and to systems defined by their IP addresses.


As we’ve comes to expect from all draft-802.11n products, wireless performance is well below the claims. For testing, we installed D-Link’s RangeBooster N DWA-645 PC Card in a 1.6GHz Fujitsu Siemens notebook running Windows XP SP2. Running the Iometer utility over a close range open link to a Supermicro Pentium D 3.2GHz PC on the LAN saw an average raw read throughput of 72Mbps which dropped marginally to 68Mbps with WPA2 encryption enabled. Real world speeds took a tumble as copying a 690MB video file to the PC took nearly two minutes for an average of only 46Mbps which dropped to 41Mbps with encryption activated. With the laptop located on the floor below the router the PC Card utility showed a signal strength of around fifty per cent and Iometer reported a drop in raw performance to 49Mbps over an encrypted link. 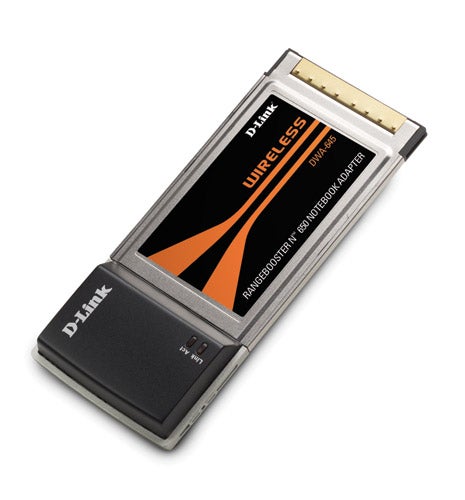 Wireless speeds may be unimpressive but impatient users will approve of Gigabit performance. To compare this with a 100Mbps connection we first linked a pair of Supermicro dual 3GHz 5160 Xeon servers to a Fast Ethernet switch. Copying a 690MB video file across them took 65 seconds for an average speed of 85Mbps whilst a 418MB collection of graphics files returned 80Mbps. Reconnecting the servers to the D-Link router saw the same tests returning 455Mbps and 420Mbps respectively.

D-Link’s setup wizard takes the pain out of initial installation and checks your Internet connection.

D-Link offers the best web access controls for these types of routers.

The router’s USB port can be used to automatically configure it with your client’s wireless settings.

The PC Card utility helps with wireless configuration but don’t for a minute believe the displayed link speeds.