It is a tough job making wireless routers in 2011. The limits of 802.11n
(available commercially in
‘ Draft‘ form since 2007) mean manufacturers have been limited to the
same core wireless speed standard for nearly five years. As such it is
not only hard to differentiate products from the competition, but also
to convince users they need to upgrade in the first place.

Taking
another stab at both arguments is D-Link with its ‘DIR-657 Wireless N
HD Media Router 1000’, a router which claims to address the biggest
challenge facing wireless today: reliably streaming multimedia content
around the home. The key differentiator here is D-Link’s proprietary ‘HD
Fuel’ bandwidth prioritization technology which the company claims will
identify and prioritise multimedia and gaming packet data to ensure
faster and more consistent performance.

It sounds good in theory
and D-Link hasn’t skimped in other areas as it attempts to win you
over. The DIR-657 is
DLNA-certified, comes with SharePort allowing any USB device (such as a printer or external HDD)
to be accessed across the network, and also packs an SD card slot
enabling easy sharing of camera and video recorder content. On the
security side of things you’ll find
WPA2/128-bit
AES data encryption, support for
CAPTCHA and D-Link’s now
commonplace one button WPS security setup. Meanwhile adding a little
future proofing, the DIR-657 is
IPV6
ready – the new protocol which will make room for another 340
undecillion Internet
addresses. Of more immediate use D-Link has also outfitted the DIR-657
with four Gigabit LAN ports.

Despite all this D-Link has taken risks. Surprisingly the DIR-657 uses just a single wireless band (2.4GHz) rather than the two (2.4GHz and 5GHz) typically seen in high spec routers. 5GHz isn’t supported by every wireless device, but it offers faster performance (albeit at shorter range) than 2.4GHz and allows a router to broadcast two networks with independent bandwidth – ideal for separating someone in a household streaming media from another hogging bandwidth with web surfing and Internet downloads.

In addition D-Link has used its ‘N 300’ specification
(offering speeds up to a theoretical maximum of 300Mps) when it has also
long offered an ‘N 450’ spec. Obviously theoretical speeds remain pie in the sky compared to real world performance, but for such a
multimedia focused product it seems strange D-Link hasn’t opted to equip
it with every possible advantage. Consequently our enthusiasm for the
DIR-657 was somewhat muted and for all its headlining features we found
that caution to be well advised.

Whether using mixed mode
(802.11b/g/n) or locking the router specifically to 802.11n, the DIR-657
delivers disappointing results. At two metres in the fractionally
faster 802.11n single mode throughput reached just 49Mbps when
transferring a 700MB file. This dropped alarmingly to 19Mbps from five
metres away then to just 11Mbps from 10 metres. From 10 metres with a
solid wall and hollow wood door in the way (a more realistic scenario)
throughput dropped to just over 3Mbit. This leaves the DIR-657 some way
behind dual band routers like the
DIR-825 and speeds are unremarkable even for a single 2.4GHz band device.

As a result we found the much hyped HD Fuel technology to be fighting a losing battle. Streaming 1080p HD content is fine within five metres, but at 10 metres you’ll be restricted to 720p and without a completely clear path obstructions will quickly limit you to standard definition. All of which means the DIR-657 isn’t solving its primary task: extending the range of reliable media streaming. This isn’t to say HD Fuel doesn’t work, simply that the DIR-657 doesn’t provide enough throughput at range to give it a chance. 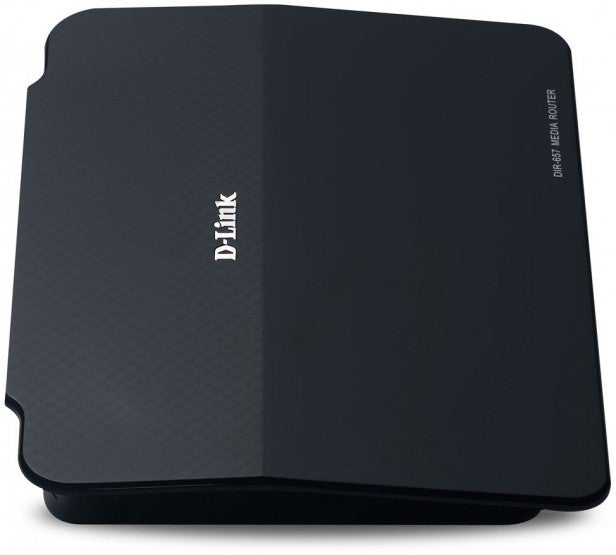 Furthermore the omission of dual band capability is a mistake. Firstly because 2.4GHz and 5GHz dual band routers typically achieve greater throughput – particularly at range – and secondly because they can simultaneously broadcast two wireless connections each with independent bandwidth. With the DIR-657 restricted to broadcasting just a single connection all wireless activity is forced to fight for space and it makes simultaneous media streaming for two users totally impractical. Looking further ahead at present DIR-657 firmware is currently at v1.00, but it is hard to see how software improvements could fully resolve these hardware limitations.

On the upside while we found the DIR-657 fails to live up to its name as a media specialist, those without pressing range concerns will enjoy the fact D-Link’s software is as comprehensive as ever. In addition to the wide array of security features, the DIR-657 can also create a guest network, provide network filtering, parental controls, support WISH (Wireless Intelligent Stream Handling) for custom traffic prioritisation and metre Internet usage – particularly handy if you have a limited monthly download allowance. The DIR-657 is also a snap to setup thanks to the simple install wizard on the bundled software and it features D-Link Green power saving technology to keep the bills down. If you hadn’t noticed, the design of the DIR-657 makes it something of a looker as well. 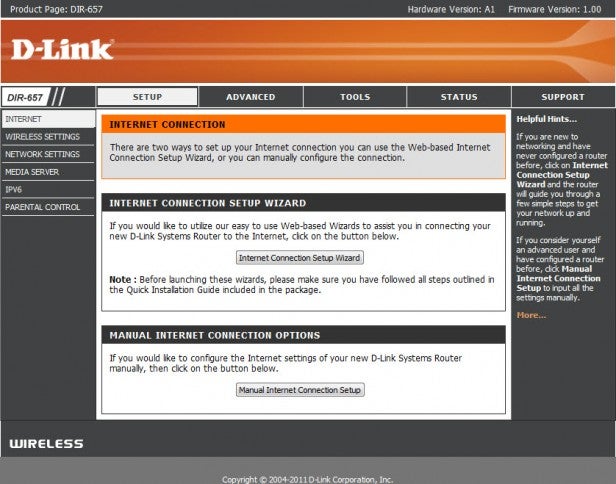 Sadly though we have to finish on negative. While we wouldn’t hesitate to recommend the DIR-657 for casual users or those with small flats (and thin walls) where range isn’t a concern, D-Link scares off this demographic with an £89.99 RRP. This makes the DIR-657 nearly twice the price of many single band routers and more expensive than most dual band routers. Even without the other issues, this would be a deal breaker.

”’Verdict”’
In an age of HD video and Cloud computing, the limitations of 802.11n continue to haunt all manufacturers of home wireless equipment. D-Link has attempted to teach the old dog new tricks, but unfortunately with the DIR-657 it has chosen the wrong ones. The omission of dual band means wireless performance is not up to scratch and consequently no amount of clever traffic prioritisation technology can fix it. Furthermore while we’d like to recommend the DIR-657 based on its slick software and good looks, its asking price is sky high. We get what D-Link was trying to achieve, but unless the first firmware updates can pull off miracles next time we’d like more substance with the style.