Axis Communications may have had the network IP camera market pretty much to itself for many years but not any longer as a number of big players have recently joined the game. Along with Panasonic and Sony we now have D-Link with its latest DCS-5300G delivering an impressive array of features. It offers remote pan, tilt and digital zoom functions, automatic patrolling, wired and wireless access, motion detection, audio capabilities and a claimed 30fps video streaming as well. 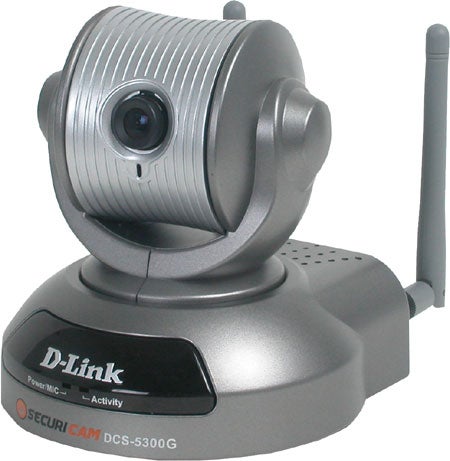 Design isn’t one of this camera’s fortes as the ribbed, barrel shaped lens housing squatting between two plastic prongs wouldn’t look out of place in Fritz Lang’s Metropolis. However, it can tilt through 90 degrees and pan across 270 degrees giving it a much better range than Panasonic’s diminutive BL-C10. Rotation isn’t smooth though as the motor moves the lens barrel and holder in small steps resulting in a series of jerks rather than a glide. A Fast Ethernet port is located at the rear and flanked by video and audio RCA sockets for connecting the camera to a TV. There’s also a four-pin connector block for adding external devices such as relays, door bells, door sensors and so on.


The bundled installation wizard utility makes light work of initial setup as it searches the network for D-Link cameras and offers them up for basic network configuration. The home page opens with a live view and a control pad to the right-hand side for panning or tilting the lens and moving it directly to its home position. You can also point to any area in the viewing window and clicking there will centre the camera on that location.

General picture quality is above average with the best results coming from the 352 x 240 pixel resolution. The highest resolution of 740 x 480 pixels wasn’t as sharply focused and this setting also drops the frame rate to a maximum of 10fps.

Bizarrely, although D-Link claims a 30fps rate the menu option for changing the video resolution only allows up to 25fps to be selected. Even so, we found general motion within the viewing area conveyed reasonably well. Note the zoom function is digital and not optical and we found quality at the highest setting of 4x deteriorated noticeably with focus being the biggest casualty.


D-Link offers a big box of surveillance toys to play with as the camera can be set to automatically pan through its entire horizontal range. Up to twenty preset lens positions can be saved and added to a patrol list. With this activated the camera will move to each position as placed in the list and stay there for a specific dwell time in seconds before moving on to the next. However, it will stop after completing a single circuit.


You also get a palm sized infra-red remote control pad which can be used to pan and tilt the camera, activate and stop auto-pan and auto-patrol and move to the home position. This feature can be disabled from the camera control web page.

Support for 802.11g wireless operations makes the DCS-5300G stand out as few network cameras offer this yet – even Axis’ latest 206W only supports 802.11b. We tested this with a ZyXEL Prestige 2602HW access point and a notebook with a Proxim 802.11b/g wireless PC Card and had no problems linking to the camera over a wire-free connection. If you don’t want anyone peeking at your transmissions you can implement 128-bit WEP encryption as well.


The built-in microphone is very sensitive and could have problems in areas where noise levels are high. While testing with our notebook in the same room as the camera we forgot the external speakers were on full volume and received masses of feedback for our troubles.


Motion detection completes the hardware picture and up to three customisable locations within the viewing area can be set up where this is to be active. Sensitivity can be tuned using the graph alongside and if tripped images can be sent to an FTP server or multiple email addresses. The Application setting also provides access to actions to be taken if external devices attached to the connector block are triggered.


The camera comes with a very good software bundle as D-Link’s IP Surveillance software allows you to monitor the live feeds from as many as sixteen cameras simultaneously. Controls are provided for taking instant snapshots from the selected camera, activating motion detection and starting a recording session to a predefined folder on the local hard disk. Usefully it also provides a volume slider for fine-tuning the internal or external microphone. There’s much more as you can schedule recording sessions for specific times and days on each camera and a separate playback utility is used to view the selected recordings.


Camera design is archaic and the engineering isn’t great but the above par picture quality and tons of features go some way to make up for this. D-Link really has packed in a wealth of surveillance capabilities into the DCS-5300G and the software bundle complete with recording studio makes this very good value.