The D-Link Omna 180 Cam is the first Apple HomeKit-certified security camera. Integrating with the Home app in iOS 10, the camera can be controlled alongside your other smart home kit via touch or voice.

There’s a certain design expectation from any product intended to integrate with an Apple service tightly. I have to say that D-Link has nailed it with the Omna 180 Cam. While it’s hard to describe any security camera as truly desirable, the Omna is certainly attractive. Its neat metal-effect finish and cylinder body (26mm diameter and 133mm high) look great and aren’t too obtrusive. 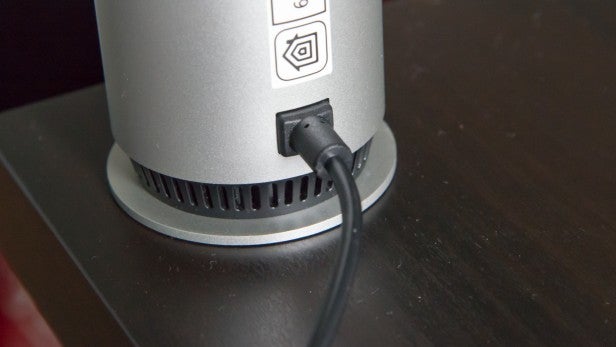 Around the back, there’s a micro-USB power input. The recess is square, with the matching plug connecting and sitting flush; it’s a minor thing, but not having a USB connector sticking out certainly looks neater. With 2.9m of cabling, there’s enough to place the Omna pretty much anywhere you’d like it.

Turn the Omna upside down, and you’ll discover the microSD card slot on the bottom. A rubber ring around the entire camera ensures that the Omna sits firmly on any surface, free of any wobbles. 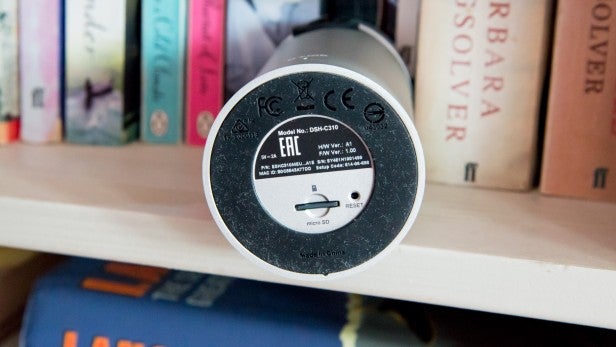 Although the Omna 180 integrates with Apple Home, it also has its very own Omna app. Having two apps is a little annoying, especially since you can only do certain jobs from the Omna app, with Home giving you fewer features. For example, you can’t watch recorded video from Home, only from the Omna app. Frustratingly, there’s no Android version of the Omna app, either, which makes the camera rather limited.

When setting up the camera, it doesn’t matter which app you use. The important thing is the Apple HomeKit code, which you have to use to add the camera. Fortunately, D-Link has printed it on the back of the camera in big letters, so there’s no chance of losing it. It’s also printed on the quick-start guide. Setting the camera up and joining it to a Wi-Fi network is straightforward; I had mine running in a matter of minutes. 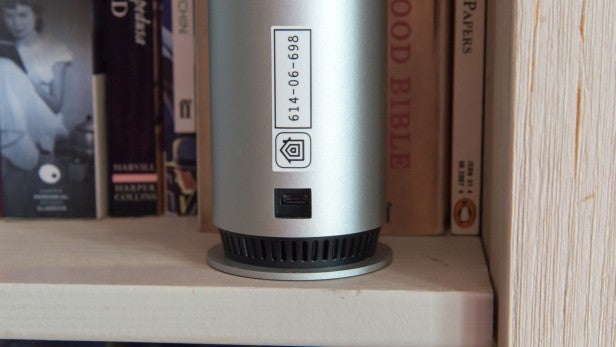 Placing the camera is also simple, since it has a wide-angle 180-degree lens, letting it take in most of a room from anywhere you put it. Automatic night-vision lets the Omna work in any lighting environment, too. 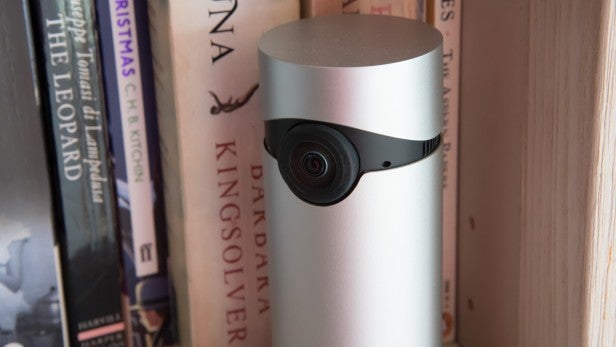 You’ll need to install a microSD card (up to 128GB) and turn on recording if you want to save any footage. While using local storage means that there are no monthly fees, it’s a shame that there’s no cloud backup option. As it stands, if a thief takes your camera, they also take your evidence.

Once added into your system, the Omna appears in Home as two devices: the physical camera and, separately, as a motion sensor. The latter is quite neat, as you can use the camera’s motion detection to perform other actions, such as turning on a light. 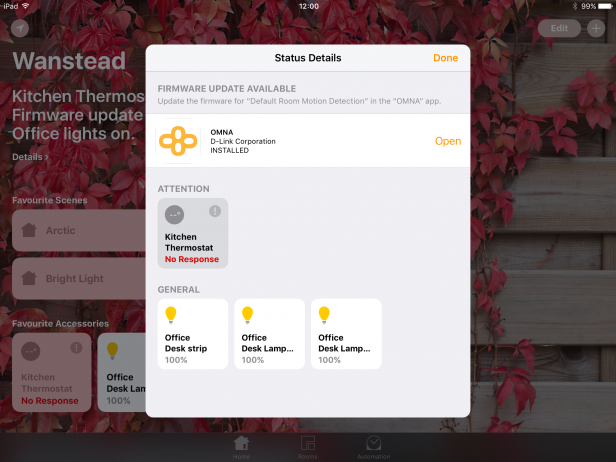 Frustratingly, you can’t disable the motion sensor at set times or when you’re in the house, since Home insists that the device is active at all times. In other words, the Omna is going to end up recording a lot of footage of you at home. There’s no IFTTT channel, either, so you can’t integrate this camera with other non-HomeKit devices.

From the Home app, you get basic control of the Omna. You can view live footage by tapping the big thumbnail. Once connected to the stream, you can use the voice option to transmit sound to the Omna’s speaker. This could be useful if you want to scare a burglar away. Notifications have to be managed from the Home app, too, and they’re turned off by default. 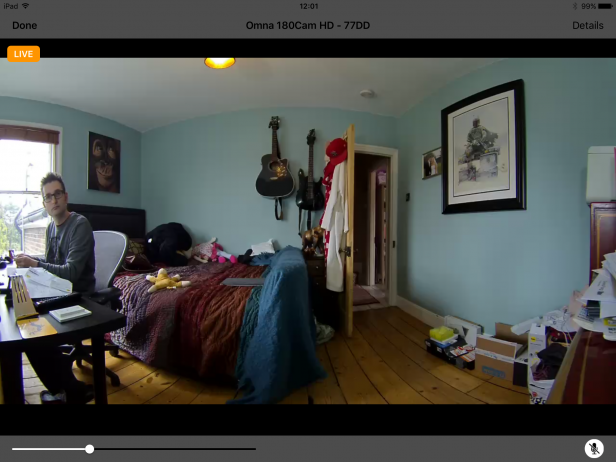 Siri integration feels a little pointless. You can only ask to see your security camera’s live footage, which saves you a couple of taps at the most.

Home doesn’t offer any control over the camera’s advanced features. You’ll need the Omna app to set the motion detection area, sensitivity and the Motion Retrigger Delay (how long the camera should wait before warning you about further movement). 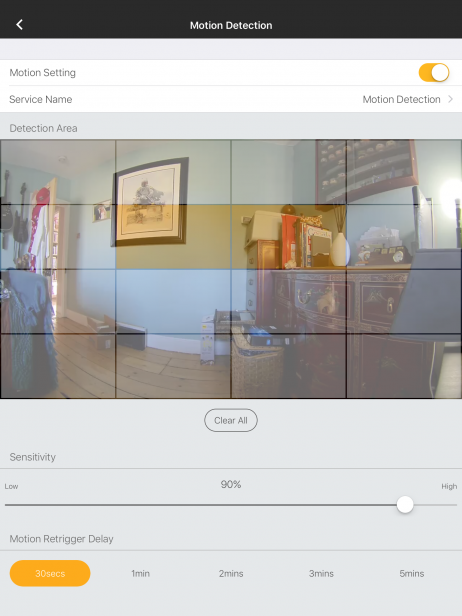 Viewing recorded video is possible only through the Omna app. It defaults to showing you footage from today only; to view older footage you have to tap the calendar icon and then select the date that you’re interested in. D-Link’s integrated video player is good, but there’s no option to export the video to your camera roll. To save footage, we had to remove the memory card and connect it to a computer.

Remote viewing is only possible is you have a HomeKit hub; this has to be a  4th-generation Apple TV, as the 3rd-generation model doesn’t support security cameras. Again, this is limiting, and remote viewing feels like something that should be provided by the Omna app.

There are no video quality settings to change, so you’re stuck with the pre-set resolution. D-Link says that the Omna is a Full HD camera, but this is only for the live stream. Checking the video files recorded to the microSD card, I found that they were all recorded at 720p with a smooth-enough 15fps frame rate. According to D-Link, the resolution reduction helps save space on memory cards. That may be true, but why not give the option for Full HD?

Image quality is very good. Squeezing the 180-degree panoramic view into a 720p recorded image means that some fine detail is smoothed out and there’s the inevitable fish-eye effect; however, it’s easy to see what’s going on and recognise people. 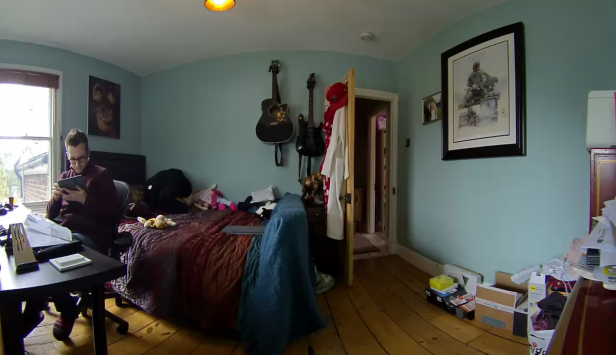 At night the IR LEDs lit up my test room and let me see what was going on. More detail is lost in this mode (as it is with all cameras), but I could still see plenty of information and easily recognise people from the footage. 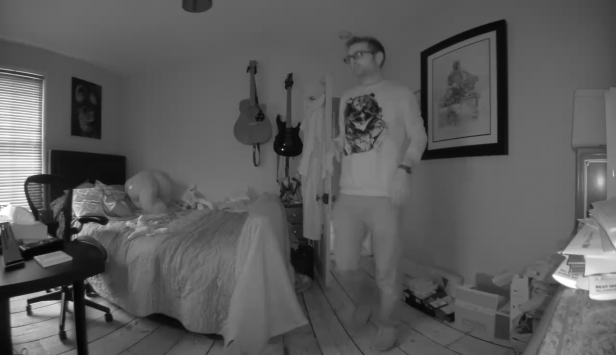 Excellent image quality, a panoramic lens and a great design make the D-Link Omna 180 Cam stand out. But while it’s good to see more HomeKit products, this camera feels more limited as a result. The lack of an IFTTT channel, Android app and cloud storage, coupled with having to control the camera via two apps, makes the Omna a more frustrating experience than it should be.

Greater device support, while maintaining HomeKit compatibility would have been enough to tip the scales. As it stands, the Netatmo Welcome, which has built-in face recognition, is a smarter, cheaper, choice.

It’s great to see more HomeKit devices, but the lack of Android support and the need to use two apps detract.