If you’re fed up with the thin, weedy sound limping out of your flatpanel TV speakers and don’t have room for a 5.1-channel home cinema system, then a soundbar might be the ideal solution. There’s a growing number of these wall-mountable one-box wonders on the market, and the latest to join the party is Crystal Audio with the SSB-1.


The most eye-catching thing about this particular soundbar is the price – at £200, it dramatically undercuts rival products from the likes of Monitor Audio, B&W, Denon and Marantz. As a result the spec sheet isn’t particularly cutting-edge, but if its sound quality is up to scratch then we could have a real bargain on our hands.

The SSB-1 packs all of its electronics into a single, compact unit, and uses the imaginatively-titled Virtual Surround Sound (VSS) DSP processing to replicate the effect of a real 5.1-channel system. Crystal’s R&D team in Athens, which includes five acoustics engineers, has worked on the SSB-1 alongside European universities and engineers at its China factory, so we’re hoping this cumulative brain-power can deliver more convincing surround sound than some of the other soundbars we’ve tested recently.


Inside the box are eight speaker drivers delivering a combined power output of 200W plus a 100W subwoofer, which means there’s plenty of power to go around when playing back movies or music. 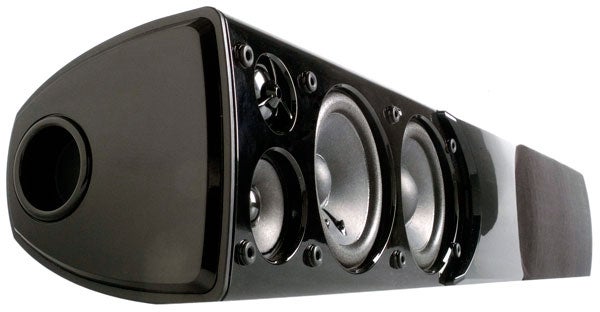 The price tag suggests corner cutting on the build quality front, but that’s simply not the case. The SSB-1 is as solidly constructed as any other soundbar on the market and it’s easy on the eye too – the sleek black styling means it should complement most LCD TVs. What also jumps out is how compact the SSB-1 is. It measures just 685mm wide and 140mm deep, which makes it a nice unobtrusive unit to perch on a table top or hang on the wall.


Sandwiched in between the two removable speaker grilles on the front is a small blue dot-matrix display that shows all the relevant info, like volume levels, the current source and other settings. Beneath it is a row of blue touch-sensitive buttons (source select, power and volume), which is a nice addition at this price. On top is a universal iPod dock, which lets you charge players with a 30-pin connector and control them using the soundbar’s remote. There’s also a 3.5mm minijack for use with other types of MP3 player. 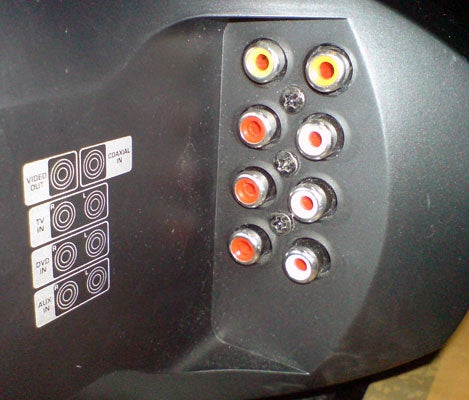 On the back is a paltry selection of sockets. There’s a coaxial digital input for hooking up a DVD player, but because the unit doesn’t offer Dolby Digital or DTS decoding (the first real evidence of cost cutting) you have to set your deck to output PCM. You also get three sets of analogue stereo inputs, labelled Aux, TV and DVD and a composite video output for viewing photos and videos from an iPod. The lack of HDMI inputs isn’t really surprising at this price, but we’d have liked a couple of optical inputs for connecting a Sky+ box digitally or to cater for DVD players that don’t sport a coaxial output.

Crystal Audio assists the installation procedure by putting a wall mounting kit in the box, and the setup process is made simple by the limited options available. You can adjust the levels of the left, right and subwoofer channels and, er, that’s about it. There are a couple of other modes to play with – EX-BASS, a three stage bass booster, and EQ, a bunch of presets that seem geared towards music playback with names like Rock, Pop, Classic and Jazz.


The supplied zapper is of the credit-card sized variety with those little bubble buttons that can be fiddly to press. Thankfully it’s neatly laid out – the volume and up/down keys are arranged in a cross, while the other buttons are sensibly placed and boast clear labelling. You can toggle through the EQ and EX-BASS modes or activate VSS using the dedicated buttons, and at the bottom you’ll find forward/back skip and play buttons for controlling iPod playback.

To check out the SSB-1’s credentials we fired up ”The Return of the King” on DVD and fed the signal into the coaxial digital input. Jumping to the movie’s astonishing battle scenes, its sound quality is surprisingly powerful for such a compact unit and it handles the cacophony of effects with surprising speed and force. The driving score that underpins the action also sounds rich and majestic, making it quite easy to get carried away by the energy of it all.


However, the slightly harsh tone with more aggressive effects – such as the screeching beasts and clattering swords – betrays the soundbar’s budget price tag, and voices sounds a bit boxed in, particularly when there’s a lot going on around them.

With VSS activated, the sound is reasonably expansive. Echoing voices are nicely emphasised and the sound of catapulted fireballs can be heard wide to the left and right of each speaker, but as is so often the case there’s no indication of the effects getting behind you. Another positive to take away is the SSB-1’s bass performance, which is deep and responsive enough to eliminate the need to add a separate subwoofer.


A blast of ”Frank McComb Live In Atlanta” on CD reveals the soundbar to be more at home with music than movies. The instruments are relayed with a crisp, energetic feel and a decent sense of rhythm, propelled along by the solid bass, while McComb’s vocals are suitably smooth. Make sure you switch off VSS though, as music gets too overpowering with it switched on.


For £200, the SSB-1 was never going to beat soundbars like the B&W Panorama or the Marantz ES7001 on sound quality, but it’s better than you might expect for the money, and trumps your average TV speakers any day of the week. The lack of surround sound decoding and limited inputs might be an issue for those with expansive home entertainment systems but for some buyers (and iPod users) the decent performance and excellent price will make up for this.