When we say the speakers in this 5.1-channel system are bipolar, we don’t mean in a Stacey Slater from ”EastEnders” way – it means they emit sound in two directions in order to achieve wider sound dispersion than ‘direct radiating’ speakers, creating the sort of immersive atmosphere you get at your local multiplex.


This particular package from Greek manufacturer Crystal Acoustics – previously known as Crystal Audio before their recent rebrand – includes four of these slimline tower speakers (BPT2.0-BGL) for the fronts and rears, all of which use this bipolar technology. A pair of these will set you back £179 when bought separately. 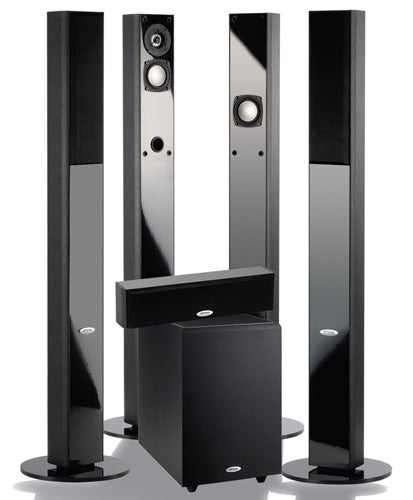 Also in the box is the LCR-BGL centre speaker (£89) and on bass duties is the £269 THX-10SUBT-BL subwoofer. As you’ve probably worked out, buying these speakers as a package directly from the Crystal Acoustics website gives you a £100 saving over the combined price of separates.


Unpacking the various components from their boxes, we instantly got a sense of the system’s impressive build quality. The 1,050mm tall towers, for example, are weighty and rigidly constructed like any good speaker should be – not light and hollow like many all-in-one system speakers. At 80mm deep they’re some of the narrowest floorstanders we’ve encountered of late, and this slender shape is also said to have sonic advantages like reduced diffraction and wider dispersion.


Crystal has done a nice job with the styling too. They’re coated in a dreamy high gloss black finish all the way down the front and back, although the dappled leather effect finish down the sides is a little tacky. Each tower comes with a circular gloss-black base that screws onto the bottom.


Whip off the cloth grille on the front and you’ll see a pair of high-power 75mm mid/bass drivers and a 25mm tweeter with a neodymium magnet and electronic protection for extra safety when listening at high levels. Under the rear grille lies another 75mm mid/bass driver designed to add that extra sense of ambience and spaciousness.


Turning to the centre speaker, it’s designed to match the towers both in terms of styling and timbre. It’s fairly compact too, which is always a help when it comes to fitting it under your TV, but if that’s not possible then there’s an ‘invisible wall mounting system’ on the back (a couple of holes, in other words). It can be used horizontally or vertically, and like the towers there’s a 25mm aluminium tweeter and a pair of 75mm mid/bass drivers behind the removable grille.


The THX-10SUBT-BL sub is big and burly but not as heavy as its size suggests, plus the minimal black styling stops it sticking out like a sore thumb. The sturdy, heavily-braced cabinet is designed to be as ‘acoustically dead’ as possible, while the rigid paper cone inside aims for a fast response with no distortion. Frequency response ranges from 35Hz up to 200Hz and there’s a 120W amplifier lurking inside – neighbours beware.


On the back of the box you’ll find a volume dial, phase switch and subwoofer input. The THX-10SUBT is THX Select certified, which makes it suitable for medium-sized rooms up to 2,000 cubic feet, and for that reason you’ll find another switch on the back that lets you choose between THX and Variable modes. The former meets all of the THX specs, while the latter does the same except that the amplifier’s internal gain is lower and it lets you change the output level using the volume dial.

All of these technical treats translate into very satisfying sound quality. The bipolar technology is the system’s big selling point so it makes sense to start with that, and our first impression is that those extra rear-firing drivers make a big difference. The soundstage seems fuller and more fleshed out than most regular systems, giving you a more pronounced sense of being enveloped. The three speakers at the front merge beautifully and effects sweep smoothly between them, while rear effects and ambience are also nicely spread out.


As a result you’re plunged right into the heart of the action. As Batman fights off dog-wielding thugs in ”The Dark Knight”, you feel the kicks, punches and gunshots echoing all around you. The thunderous car chase sequences make you feel like you’re riding on board with the Joker. It’s thrilling stuff. 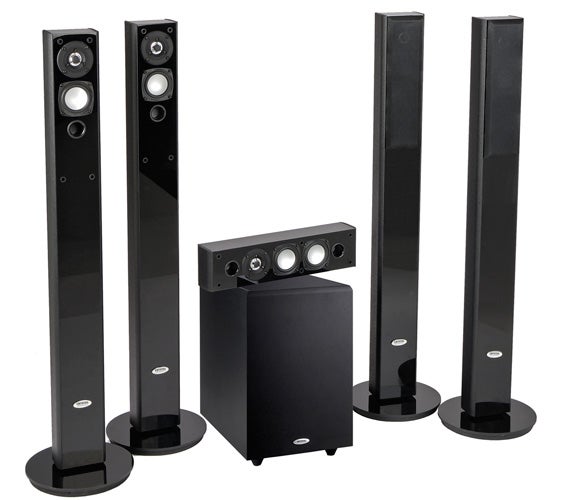 Of course, your enjoyment will depend on personal taste more than anything. You lose some of the directional precision of direct radiating speakers, for example, which some home cinema fans might not appreciate. That’s not to say you don’t know where effects are coming from – there’s still a distinct sense of placement – but they aren’t projected at you in the same way.


There are plenty of other positives. The subwoofer is a class act, producing taut, potent bass tones. It’s remarkably responsive too, lending depth and punch to transient sounds like gunshots and the sound of the robbers’ school bus crashing through the bank wall. Louder and more sustained low frequencies don’t sound slack or boomy either, plus the crossover with the towers is absolutely seamless.


Also impressive is the overall crispness of the sound. High frequencies are pristine without sounding too thin or abrasive, and as a result ”The Dark Knight’s” Dolby TrueHD soundtrack is sparkling with detail. You don’t get the last scintilla of detail but the sound is surprisingly insightful for a £600 system. It’s backed up by clean, perceptible dialogue, even when there’s lots of action going on around it.


The BPT5-10BL is an intriguing speaker system that takes an unusual but effective approach to home cinema sound. The use of bipolar technology provides a rich, enveloping soundstage that convincingly replicates the sort of thing you might hear at the cinema. If you prefer your effects a little more direct you might want to look elsewhere, but to our ears this method works well.


However, the success of this system isn’t down to bipolar technology alone – we’re also impressed by the towers’ crisp detail and excellent bass performance from the THX-10SUBT-BL. What’s more, it’s stylish, well-built and best of all can be yours for a very reasonable £600, which makes it terrific value.