The BX100 got off to a decent start in our AS SSD tests. Its sequential read and write speeds of 521MB/s and 349MB/s are better than the MX100, and the former result also beats the SanDisk – although that drive fights back with a write pace of 473MB/s.

Results were more mixed when the MX100 dealt with smaller files. It fell behind the MX100 in the 4K tests and traded blows with SanDisk in the same tests, but it was behind both drives in the 4K-64 benchmarks. Its worst performance here came when reading files: its 277MB/s result lagged behind the MX100’s 335MB/s and the 330MB/s scored by the SanDisk.

The BX100 remained inconsistent in CrystalDiskMark. Its sequential read and write speeds of 536MB/s and 368MB/s beat the older MX100 drive, but it traded blows in the mid-sized 512KB test – its 368MB/s read speed fell behind, but its 369MB/s write pace was faster than its home-grown rival. It remained a little slower when reading and writing small files.

Crucial’s budget drive was less convincing when writing files. Its initial 8KB result of 326MB/s fell behind both of its rivals, and its top write speed of 367MB/s was a little ahead of the MX100 but miles behind the 506MB/s result of the SanDisk.

The more expensive Crucial MX200 ditched its smallest capacity, but the BX100’s budget nature means it’s possible to buy this drive at 120GB, and it’s cheap – just £50. That makes it one of the most affordable SSDs we’ve ever seen.

The 500GB version costs a tempting £149, and the largest drive available, 1TB, will set you back £282. Crucial’s budget drive is available in a good range of capacities, but it’s not made in the M.2 or mSATA form factors – for that, you’ll need to jump up to the MX200.

The three-year warranty matches the other Crucial drives and SanDisk’s unit, and the 7mm BX100 is supplied with a 9.5mm spacer. That accessory was included with the other Crucial hardware, but it’s missing from the SanDisk. 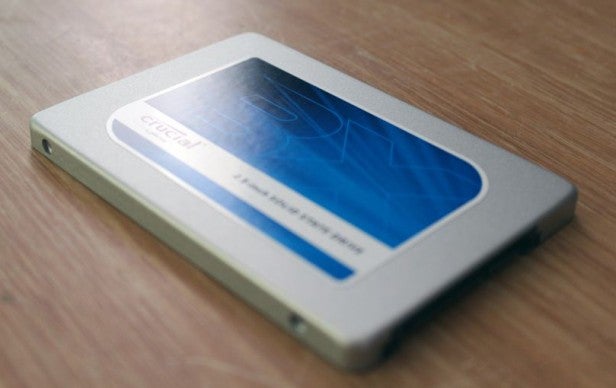 Crucial’s latest drive trades blows with its competitors for many of our benchmarks: its good read speeds were undermined by poorer write pace, and it offered similar speed to its competitors when handling smaller files.

That pattern repeated in Atto, with decent read speeds hampered by mediocre write speeds. Thankfully the pace picked up in IOMeter and PC Mark 7, where the BX100 beat its key competitors.

We’d comfortably recommend the BX100 over the MX100 – it’s faster in most read tests and is a little quicker in several key write benchmarks, too.

However, Crucial’s budget drive is a tougher sell when up against the SanDisk. The Ultra II has similar read pace and faster, more consistent write results, and it’s just as affordable as the BX100. They’re all compelling arguments, even if the BX100 trounced the Ultra II in IOMeter.

Explore our guide to buying the best gaming laptop, or delve into our list of 2015’s finest FPS games

Crucial’s BX100 doesn’t include the high-end features of other drives, but it delivers decent performance at a tempting price – especially when its impressive file reading pace is considered. Those results make it a better bet than the older MX100, but it’s a tougher sell when against the SanDisk Ultra II, which has faster writes but poorer IOMeter results. It’s not an entirely clean bill of health for Crucial’s new SSD, then, but it remains an impressive budget drive.