Memory manufacturers might not want you to know but the upgrade market for fast DDR memory is as dead as a dead thing. According to the legendary Steampowered survey AMD processors around the 2GHz mark are still very popular so the odds are we’re talking about Socket 939 Athlon 64 X2 with a rating of 3800+ or 4000+. If that’s your processor of choice then we wish you well but all you need is 2GB of PC3200 for £70 and you’ll be a happy camper but it doesn’t much matter which memory you choose so long as it’s reliable. 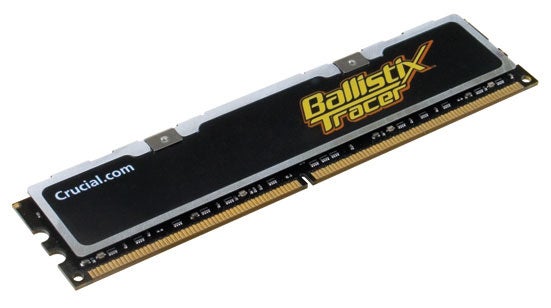 
As we saw in our memory round-up the price of DDR3 is scary but the real problem is that it currently doesn’t deliver a significant increase in performance over DDR2.


Slap bang in the middle of the memory market we’ve got DDR2, which caters for Socket AM2 Athlon 64 and the vast bulk of recent Intel chipsets and motherboards. It’s essential that your memory can run at the same speed as the front-side bus (FSB) or it will act as a severe bottleneck in performance so you might think that you need staggeringly fast memory to be compatible with your 1,066MHz or 1,333MHz FSB Core 2 Duo.


In the case of a 1,333MHz FSB you need PC2-5300, aka DDR2-667, but if you take a look at the websites of the various memory manufacturers and overclocking stores you’ll get the impression that their shelves are groaning with memory that runs beyond the 1,100MHz mark, which puts us firmly in to overclocking territory. 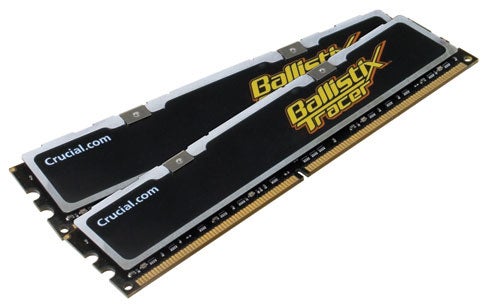 This 2x1GB kit of Crucial Ballistix Tracer PC2-8500 memory that I’m looking at today has a rated speed of 1,066MHz so it supports a FSB of 533MHz. That’s significantly faster than the 450MHz FSB we have personally seen on a Core 2 Duo using a stock multiplier and everyday cooling and voltages but once you hit the limits of the FSB you can crank up the memory multiplier so that nothing goes to waste.


The timing figures of the Ballistix are 5-5-5-15, which is in line with competing PC2-8500.However, the price is £10 or £20 lower than you might expect for branded first-on-first memory. No doubt this is helped by the fact that Crucial is a division of Micron, which is a manufacturer of memory chips as that must surely keep costs down.

Ballistix is Crucial’s performance range of memory while the Tracer feature adds a series of cosmetic LEDs to appeal to the windowed case fraternity. There are eight blue LEDs at the bottom of the PCB just below the heat spreader with four on each side. Crucial describes them as ground effect LEDs that emit a constant glow near the pins. ‘Glow’ is something of a misnomer as the LEDs are quite bright so we called on our style Guru – a nine year old girl who thinks that purple shoes are the height of desirability. She gave the blue LEDs the thumbs down but then her eyes lit up as Windows started and the two rows of red, amber and green activity LEDs along the top of the module burst into disco frenzy. This was, apparently, ‘way cool’.


So there you have it, the Tracer lights appeal to a demographic that is unlikely to spend £100 on PC parts yet it leaves your reviewer, who might be in the market, unmoved. The matt black heat spreader is understated and much more to our taste.


We tested the memory on an Asus Maximus Formula which supports DDR2 memory with Intel’s new X38 chipset using a Core 2 Extreme QX6850 processor, a PowerColor HD 2900XT graphics card and a Hitachi 7K1000 hard drive running on Windows XP SP2. For comparison purposes we used the OCZ DDR2 PC2-9200 Reaper HPC Edition that did so well in our memory round-up. 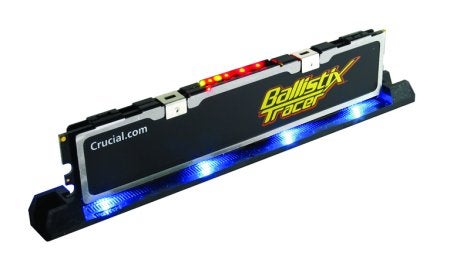 At the standard clock speed of 3.0GHz and a 333MHz/1,333MHz FSB the Ballistix ran at 1,066MHz compared to the OCZ Reaper which ran at 1,200MHz and as a result the OCZ gave marginally better performance in PCMark05. SiSoft Sandra showed that the Crucial memory had longer latency and lower bandwidth than the OCZ Reaper, which was something of a surprise.


Overclocking the QX6850 to 3.42GHz with a 380MHz/1,520MHz FSB was a doddle with the OCZ Reaper, and the choice of memory multipliers meant that we could run the memory slightly faster than standard at 1,216MHz. Performance rose in line with the new processor speed and everything was tickety boo. Overclocking the Crucial Ballistix in the same way bumped memory performance to the same level as the OCZ Reaper at standard speed but the choice of memory multipliers meant we had to lower the speed of the memory to 1,037MHz. This was fine for 3DMark06 but the system restarted during PCMark05 and wasn’t stable until we dropped the speed to 975MHz. That’s a fairly small change in clock speed but we have to wonder why it was necessary as the Ballistix was running well inside its approved speed and we really, really dislike it when unstable memory makes a PC restart during a test run.


Crucial Ballistix is fast and cheap with a decent speed rating, and the funky light show may appeal to someone, somewhere. It’s the stability that bothers us as our test system fell over when it was merely jogging along and nowhere near to a run.