Nostalgia is a powerful force, and be in no doubt that Crisis Core has been designed from the ground up to harness it. Lest we forget, this is being sold as a prequel to Final Fantasy VII, and Final Fantasy VII was the real breakthrough for Japanese RPGs in the West. While the likes of Final Fantasy IV (or Final Fantasy II as it was known over here) and Secret of Mana had achieved cult classic status in the UK and US, the RPG landscape was still dominated by the likes of Ultima, Wizardry, The Elder Scrolls and Lands of Lore at the time Square’s masterpiece arrived. FFVII changed this overnight, with an incredible combination of gorgeous 3D visuals, cinematic presentation and the deepest, richest story console gamers had ever seen. The impact was huge. Even now, over ten years after FFVII was first released, many of us still remember the game – its iconic moments and characters – more clearly than we can remember some games we played last month. In fact, it’s fair to say that, for some RPG fans of my acquaintance, nothing else has ever quite measured up. 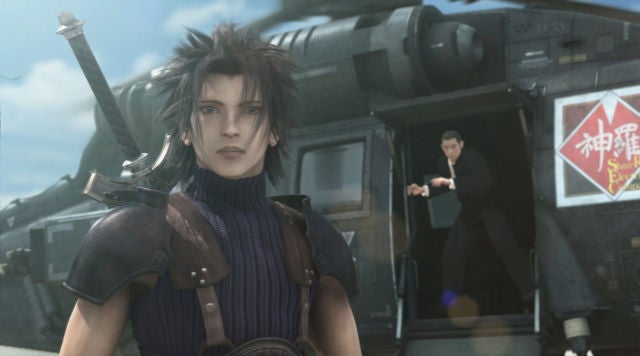 And it’s to this group that Square-Enix has addressed Crisis Core. Taken without the nostalgia factor, it’s a decent action-RPG for the PSP with some high production values and some interesting game mechanics, but not an essential purchase by any means. If, however, the chance to visit Midgar and Nibelheim and hang out with Cloud, Aerith, Sephiroth and the Turks is enough to justify the purchase then rest easy. Crisis Core won’t be 100 per cent what you’re looking for, but neither will it disappoint. 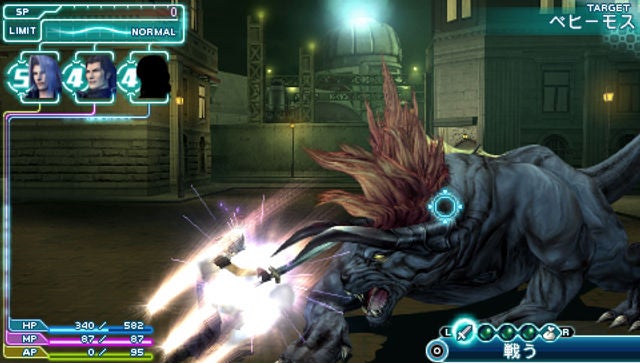 Why not 100 per cent? Well, it’s a case of adjusting your expectations first. This isn’t a traditional, party and turn-based combat RPG, but a more straightforward action RPG centring on a side character of FFVII – Zack. Fans may remember him as Cloud Strife’s once best friend (and role model) and Aerith’s first love. Around this slightly obscure figure, Crisis Core weaves a narrative that functions as a back story for FFVII as seen from a position inside Shinra, covering the events that will lead towards Sephiroth’s ‘death’ at Nibelheim and Cloud’s inheritance of the legendary Buster sword. Along the way, it ties up a few loose ends and rounds out a few characters while dishing out the mix of melodrama, sci-fi and sword and sorcery that has been the hallmark of the series between FFVII and FFXII.

On the downside, the decision to focus on one character and make Crisis Core an action RPG has made this a simpler game than some FF veterans will like. Combat is very much the meat and drink here, with character interaction and other diversions limited to only a handful of missions. Zack fights multiple foes in real time, using the left and right shoulder buttons to select attacks, spells or items, the X button to trigger the selected action, and the square and triangle buttons to block and dodge. It sounds simple – and it is – but there is a little more to the fighting than mere button-mashing. The trick is in the timing, particularly as a well-timed evasion is the only way to limit the damage from heavier attacks on Zack’s good self. 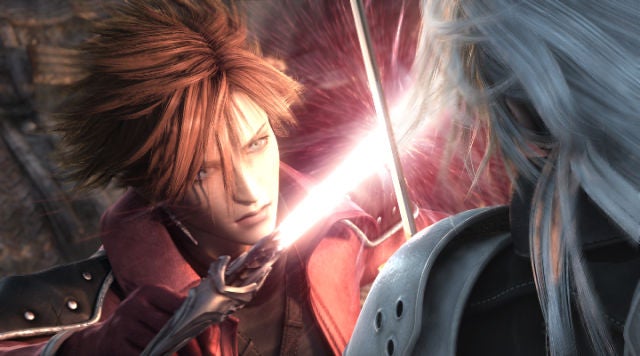 What’s more, while you’re hard at work on the attack, a system Square-Enix calls the Digital Mind Wave is constantly running in the background. This works a bit like a slot machine, the reels spinning with three faces and three numbers. When three faces line up, the DMW calls in a special attack or ‘limit break’ dishing out mucho, mucho damage to your current foe or foes. When three sevens line up, meanwhile, Zack levels up, boosting his key stats in classic RPG style.


The faces in the DMW are those of comrades you’ll meet while the story progresses, and when they line up it’s a bit like you’ve phoned a friend in “Who wants to be a millionaire?”; your friend is suddenly there giving you the boost or backup that you need. And on top of the melee attacks and DMW limit breaks, there’s also magic to consider. Magic is controlled – as in FFVII itself – by elemental materials known as Materia. Not only will you collect and harness Materia through the game to unlock particular spells, but you’ll also unlock the ability to combine them later on, adding what’s effectively a limited amount of crafting to the game. 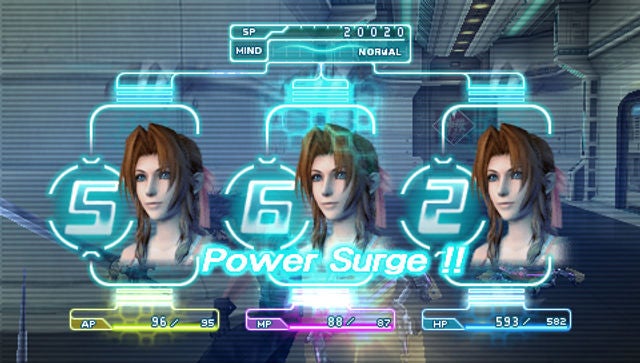 All of this may still come as a disappointment to hardened FF fanatics. While the DMW isn’t as random as it first appears, there’s not an awful lot of skill or strategy in the combat, and your main task is to juggle attacks while keeping your one character in good health. While the real-time action makes the game accessible and keeps it moving at a decent lick, the group-based AI fighting system in FFXII arguably hit a better balance between simplicity and depth. Nor does it help that opportunities to really explore are limited, and that the majority of levels are extremely linear. If you play RPGs in order to get lost in an expansive world, interact with other characters or challenge your brain with puzzles, then Crisis Core is at risk of feeling superficial.

Why then, do I like it so much? Well, partly it comes down to presentation. Crisis Core gives you a pretty good impression of what FFVII might have looked like had it arrived on PS2. The character models and the environments are some of the strongest on Sony’s handheld and no expense has been spared when it comes to lavish CGI cut scenes. Fans of the PSX original will be delighted enough just by the sight of the Ifrit or Bahophomet summons recreated in glorious CGI form. The music, much of it quoted direct from FFVII, is superb and while the voice work has its irritations – Zack is nicknamed ‘The Puppy’ for a reason, reminding you of a certain Dogtanian at times – the overall quality is very good. While most PSP games feel like second-raters, Crisis Core is A-List all the way. 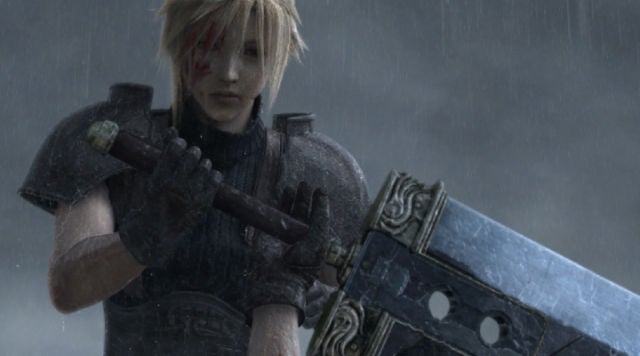 Above that, however, this is one of the few PSP games of the year that has involved me and kept me engaged for hour after hour after hour. The nostalgia factor plays a major part in this, but that’s not discounting Square-Enix’s ability to tell an interesting story, create new and intriguing characters and deliver basic but still addictive action. And though the adventure isn’t comparable to a proper FF in terms of length, it’s beefed up by a huge selection of optional side-missions, and rounded out by little touches such as a personal and company email system, some cool cameos from other FFVII characters, and a solid amount of background detail. Even if Crisis Core feels a bit like an interactive FFVII nostalgia fest at times – and it does – it’s always an entertaining one. Finally, it’s not too difficult, either. In fact, seasoned FF stalwarts will probably find the default setting a little too easy and want to switch to the Hard mode from the off. 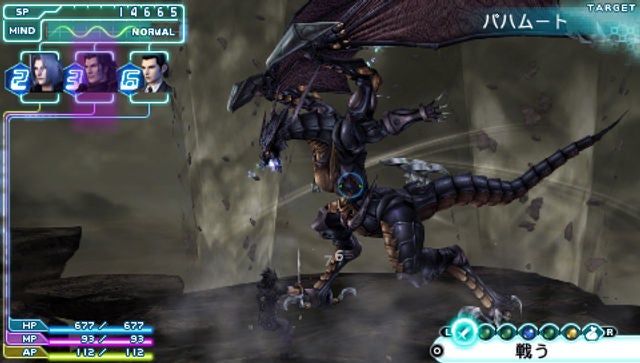 Would I be so kind if it wasn’t FFVII and it wasn’t on the PSP? Probably not, but I’d still only dock it by a point at most. For me, if you loved FFVII and you have a PSP it’s a no-brainer: buy Crisis Core. If one or both conditions do not apply, then there’s probably little reason to bother, but does that make the game any the worse? Not one bit. While I’d like to say that Crisis Core was a strong enough title to stand up on its own, it isn’t, but – all the same – it’s a game that does no disrespect to its illustrious inspiration, and the first FFVII spin off that really feels like a reward for the classic game’s fans.


The simplistic gameplay is mildly disappointing, but as a chance to get back to Midgar and meet up with old favourites, Crisis Core is unmissable for FFVII fans.