””No need to guess what Creative is targeting with this one…””


Thus, with these being more or less identical products, Creative has gone down the only path available: making it cheap. Currently the Zen Stone retails at around £30, making it more than £20 cheaper than the iPod Shuffle which can be bought for in the region of £55. For two products that share identical features this is a significant saving, and Creative’s effort doesn’t lack any style either. 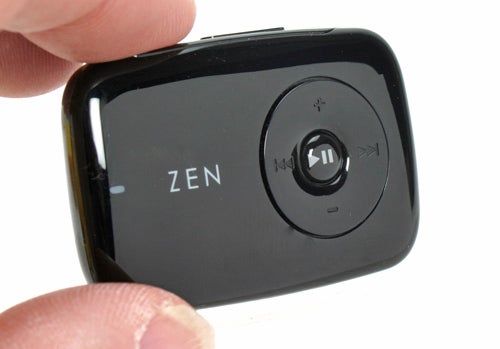 Measuring 53.7 x 35.3 x 12.8mm, and weighing a mere 18.5g, Creative has certainly hit the nail on the head design wise. Dare I say it looks better than the Shuffle? I do dare, it ”does” look better. Shiny coloured plastic is always a good look, and though Creative sent us the dourer black version the Zen Stone is available in a variety of bright and uplifting colours. Crucially, the shiny plastic is also pleasingly scratch resistant so your Stone won’t look like an actual stone after a few days in your pocket.


Aside from the colour, the basic design of the Zen Stone is both attractive and nicely laid out. It has curves in all the right places while the awkward joystick as found on the Zen V Plus is banished in favour of a intuitive circular arrangement which features an inner Play/Pause button with Next/Previous and Volume buttons surrounding it.

On the top edge you’ll find the 3.5mm headphone jack, a play mode slider and a recessed Reset button, while on the bottom edge is the mini-USB port, which is used for charging and PC connection. This is all pretty standard stuff, though, if there’s one grumble, it’s that the headphone jack isn’t positioned centrally for easy use with neckstrap earphones. This doesn’t mean you can’t use them, just that the player will hang at a slightly odd angle – and not a jaunty one either.

The only other thing that’s obviously lacking compared to the iPod Shuffle is a integrated clip for attachting it to a belt or shirt – primarily, this is for looking hip and dancing in Apple adverts. This doesn’t mean Creative hasn’t thought of this however, just that you must purchase a skin accessory that has the requisite clip-on mechanism. Similarly, Creative also produces a number of other accessories including an armband, and a key ring holder. So, to be fair to Apple, to get identical functionality out of the Zen Stone does cost a little more than the retail price, though at £6.79 for the skin and clip the Zen Stone is still cheaper when all is accounted for.

In the package Creative includes a set of earphones, a short USB cable and quick start guide. There’s no software CD, though you can download a simple Drag and Drop software utility from Creative’s website. Sadly, there’s no support for any kind of Smart Fill function, so you can’t instruct the software to fill your player with 1GB of music from your library. It seems like a bit of an oversight, though you can use Windows Media Player 10’s own Shuffle feature to similar effect.


The bundled earphones are a typically dreadful affair, probably worse than the mostly average ones found in the Zen V Plus package. Highs sound compressed, lows are more or less nonexistent and mid-range is muddy and unpleasant. The player itself boasts above average sound quality, if anything the highs sound a tiny bit compressed compared to the excellent sounding Zen V Plus but there’s little to complain about, while the Zen Stone will also output impressively high volumes.

As already alluded to the Zen Stone is a Drag and Drop device, so it’s pretty easy to get music onto the player without messing about re-encoding or checking music in or out. Rather like the Zen V Plus and other flash based MP3 players, though, the Zen Stone does suffer from having rather slow transfer rates, despite supporting USB 2.0. This is something of an accepted evil these days, and at 1GB at least there isn’t as much space to fill as on larger players. Format support brings little surprises, with support for MP3, WMA, and the Audible audio book service. You can forget about OGG, and considering the capacity of the player lossless support would be pointless.

Once you’ve become accustomed to how the player works, using the Zen Stone couldn’t be simpler. The Play/Pause button doubles up as a power button when held down, while the slider on the top edge allows you to select between Continuous and Random playback modes as well as skip folders. This means you can arrange your music into folders, creating a primitive playlist system.


On the front of the player is a small LED which blinks and changes colour according to what it’s doing. It flashes green while playing, and there are a variety of different Red, Green and Orange indicators for battery levels and so on. 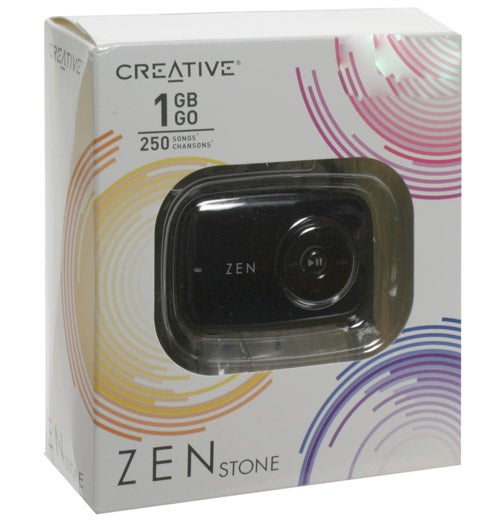 Battery performance varies; Creative quotes up to 10 hours battery life though I found it was possible to get a little more out of it depending on volume settings. This isn’t as impressive as the Zen V Plus, which managed in the region of 20 hours, but it is in line with the iPod Shuffle, which Apple quotes has up to 12 hours of battery life.


This rather backs up the feeling that the Zen Stone does everything to a satisfactory level, but at a very good price. The basic functionality is practically identical to the Shuffle, and the styling is impressive. Naturally, it isn’t a feature rich device but it’s not supposed to be and the price reflects this. Think Ronseal, you know the rest.


Smart design and a great price make the Zen Stone a good option for a second player. If you already have a large capacity player, but want something more portable for those quick trips out then it’s certainly worth serious consideration.