When Creative asked me to look at its latest set of in-ear headphones, it didn’t take much persuasion for me to agree. Creative has generally done very well on TrustedReviews, with both its budget £20 EP-630 headphones and its noise cancelling HN-700s garnering a recommended award. I therefore had high expectations for these headphones.


At an RRP of £89.99, the rather awkwardly named Aurvanas are aimed at the higher end of the market. This is quite obvious when looking at the packaging, with its matt black finish and glossy imaging that gives it a sleek finish.


The headphones themselves have a straight (i.e not angled) gold 3.5mm connection, although there is an adapter for the old-style aeroplane connectors. The cable is thin and on the short side at only 1m in length. I found this to be an issue when plugging them into my desktop speakers. 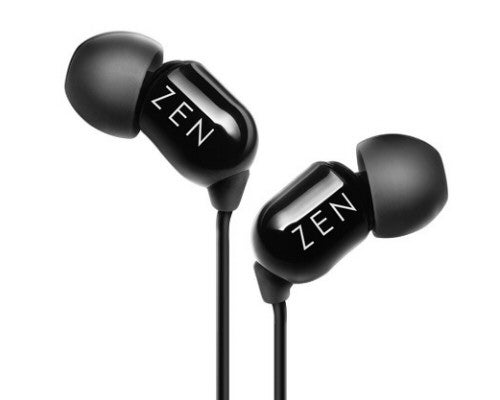 The headphones are of the noise isolating variety. Using one of the three sets of rubber buds, they are designed to go right inside your ear canal and seal shut. This in theory stops any external sound entering to disturb what’s coming out of the headphones. This is a much cheaper, and in my opinion more effective method, than the noise cancelling digital processing headphones.


I’ve never had much luck with the rubber buds on in-ear headphones as they tend to not seal properly in my ears and keep falling out. When it came to the Shure e4cs, I had to use the foam buds in order to get a proper seal (and therefore the best sound quality. However, in this case I had no problem at all, they went in and sealed properly. I have a feeling this is because I have quite deep ear canals, and due to the fact these headphones are quite small I can push them in further without the main bulk of the ear-piece being obstructed by my ear.


Creative recommends you twist the headphones as you take them out, rather than pull them as the suction effect can be large enough to “pop” as you remove them and I’d second this.

Most headphones have a single driver providing the entire spectrum of sounds from low to high. These headphones however, are dual driver – so there is one driver specifically for the lower end and another for the rest.


We’ve seen this before in the Ultimate Ears super.fi Pros, and although Riyad loved the sound, I felt the bass sounded overly separated from the rest of the music and also sounded artificially boosted (but I found the lack of bass with the Shure’s disturbing, once again proving how subjective headphones can be – ed.). This sort of thing can often happen with cheap satellite speakers too, where manufacturers try to compensate for poor mid/high range frequencies by putting a booming sub-woofer in place.


Riyad, Benny and I all found the listening experience of these headphones quite disappointing. I’ve heard better bass from single driver headphones – let alone dual. And although the bass was there, it didn’t have the accuracy that the Shure e4c’s have. On the Shures, I could hear Flea in the Red Hot Chilli Peppers picking out each note with clarity, even when other stuff was happening over the top. While with these it felt like background noise.


But the most disappointing problem was a distinct lack of mid-range and over emphasis of the upper end. It was actually painful to listen to Alison Goldfrapp of Goldfrapp, as every sibilant sound pierced through my head like a needle. Cymbals and snare drums were also especially difficult to listen to.


At lower volumes, they weren’t quite as bad, but then the volumes sounded very unbalanced – the bass was more prominent in the lower volumes than in the upper. This almost suggested they don’t increase in volume at the same ratio. When boosting the bass a little, it didn’t take much extra to get them to distort. Generally speaking they couldn’t handle much volume, which is not entirely surprising considering the size and weight of the ear pieces.


I know comparing to the £150 Shure e4cs isn’t exactly fair, but this allowed me to compare to a best case scenario. Sound quality is also a relative thing, you tend to get used to whatever you are listening to. After two days of using these headphones, I did get more used to them but I still found it a painful experience. Moving to the Shure e4cs again just blew me away, really emphasising how good the Shures really are and how poor these are. 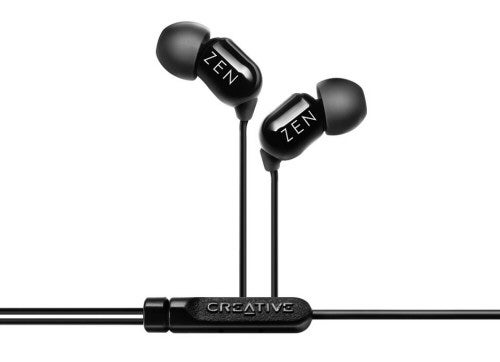 
As a bundle, these headphones seem great with nice packaging, well fitting ear buds, dual driver design and what would be a reasonable price for a set of top end headphones. But the insubstantial cables and truly poor sound quality make these headphones best avoided.


”’Riyad’s Comments”’ – Although Spode and I don’t fully agree when it comes to high quality in ear headphones, we can at least appreciate that both the Shure and Ultimate Ears products are a cut above most models, which you’d expect considering the price. We also agree that the Creative Aurvanas are very disappointing. In fact if these headphones were £30 they’d be disappointing, but at £70 they’re simply nowhere near as good as they should be.


The dual driver system on the Ultimate Ears super.fi Pro headphones gives you clarity at the top end, while filling your ears with a full bass sound without the slightest hint of distortion. The Aurvanas at first seem to offer decent bass response, but the minute you try to turn the volume up or boost the bass, you’re greeted with horrendous distortion. I may not be the biggest fan of the Shure e4cs, but their clarity and lack of distortion is without question.


Ultimately though, both my and Spode’s headphones of choice will cost you twice as much as the Creative Aurvanas, so you’ve really got to be looking for the best sound possible to consider them. That said, I still feel that the Aurvanas are very overpriced considering the poor sound quality they produce.


While meeting with Creative at IFA last month I mentioned how woefully disappointing these earphones were when Spode and I tested them. The Creative bods seemed very confused by this and insisted that I must have received a dodgy review sample.


I’ve lost count of how often manufacturers use the “damaged sample” excuse when a bad review rears its head, but considering how surprised I was at the poor sound quality from the Aurvanas, I agreed to have a listen to another set.


Expecting the worst, I plugged the Aurvanas into my ears, but found that the sound produced was infinitely better than the distorted mess I had heard the first time round. In fact, I’d go as far as saying that this example represented the sort of fidelity improvement that I’d expect when upgrading from the bundled rubbish that ships with most players.


With a current street price of around £55, the Aurvanas are definitely worth considering if you don’t want to stretch your budget to the likes of Shure or Ultimate Ears. It’s probably worth listening to the set you intend to buy though, just to make sure you get a pair like the ones I’m listening to now, rather than the original set we tested.