When I first saw Creative’s Zen Stone I couldn’t help but be impressed. Small, fun and cheap but without the cheap feel, it was a classy addition to MP3 market. As one might expect Creative has supported it with a number of accessories ranging from wrist bands and clips, to this set of dedicated travel speakers I’m looking at today. 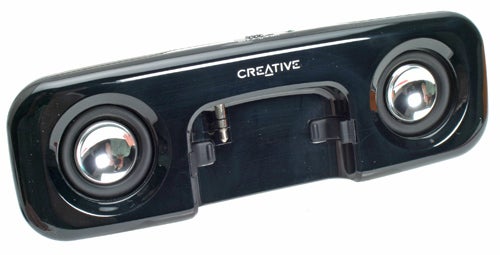 Retailing for around £30 they’re small, as you might expect, and are powered by two AAA batteries. Weighing 160g without batteries and 200g with batteries and the player inserted, these little beasties pump out a mere 0.2 Watts per channel from the two small drivers. I’m happy to admit that I approached them with some suspicion, could they possibly be anything more than utterly pointless? However, on the design front at least, Creative hasn’t made too many mistakes.


Key is the integration with the player, which is handled very well. Space is free on the front of the set for the small player, with a 3.5mm jack protruding downwards with two rubberised contacts to help hold the player in place. There are no controls on the speaker bar itself, just an on/off switch; however, the controls on the player are easily accessed so there’s no problem here. 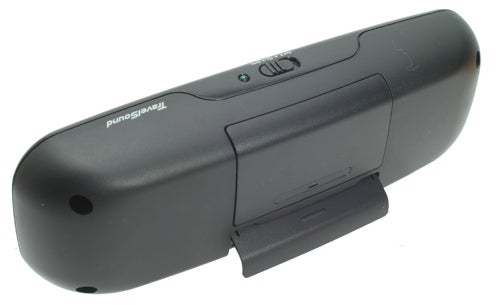 There’s also a total lack of any other inputs, so connecting anything other than a Zen Stone could prove difficult, though by no means impossible. Obviously, seeing as the set is designed with the Zen Stone specifically in mind this is again no great surprise, however an auxiliary input or cable adapter for using other players would be a nice option. After all, sometimes you want more than the one or 2GB provided by the Zen Stone and Zen Stone Plus when you’re enjoying the outdoors.

These are, however, trifling observations and otherwise this is an attractive little set that can be carried or set down on the ground. There’s a small flap that acts as a stand too, so you set them up easily on a flat surface and the design is contemporary and pleasant to look at. But do they sound any good?

Surprisingly, yes. Despite the small size of the drivers and low power output these TravelSound speakers do a surprisingly good job. Once fired up and playing, the first thing everyone in the office noticed was the impressive volume the set managed to produce. Looking at them you’d think the sound would be weedy and barely audible but, with the volume set to reasonable levels, the set creates an impressive sound that filled our offices easily.


The importance of this point can’t be undervalued. For a set of speakers that are going to spend a fair amount of time outdoors, it’s essential that they can rise above the cacophony of noise you might encounter in busy places such as beaches and the like. As such, in this they’re very well suited. A point reinforced when I went out and about for some ‘real world’ testing – read lounging about and generally having a good old time. 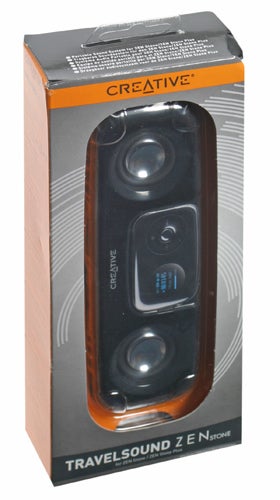 Another particular bonus is the battery life, which Creative quotes at 21 hours from two decent AAA batteries. This is very impressive, making them good for two full charges of the Zen Stone itself which manages in the region of 11 to 12 hours.


Noting that the set produces impressive volumes of sounds, it should go without saying that the quality is far from high fidelity. Bass is more a rough approximation, sounding rather like the bass sounds I make when I try and beatbox – badly. Still, it doesn’t really upset one’s enjoyment of the music since the mid-range is well produced with vocals clear and easily identified.


At the top end these speakers aren’t too shrill, which is important, but there’s enough detail to distinguish the beat. At higher volumes though, there is some audible distortion that generates a light crackle. It’s not too bad, however, and you have to pump up the volume pretty high for it to become a problem.

Overall then, if you have a Zen Stone and want some light, cheap and mobile speakers, then this set will serve you very well. It’s a shame that it isn’t easier to connect other players, but the benefits of the design and excellent battery life make them a good option


Small but surprisingly loud, Creative’s TravelSound speakers for the Zen Stone do everything you could ask of them at a reasonable price.